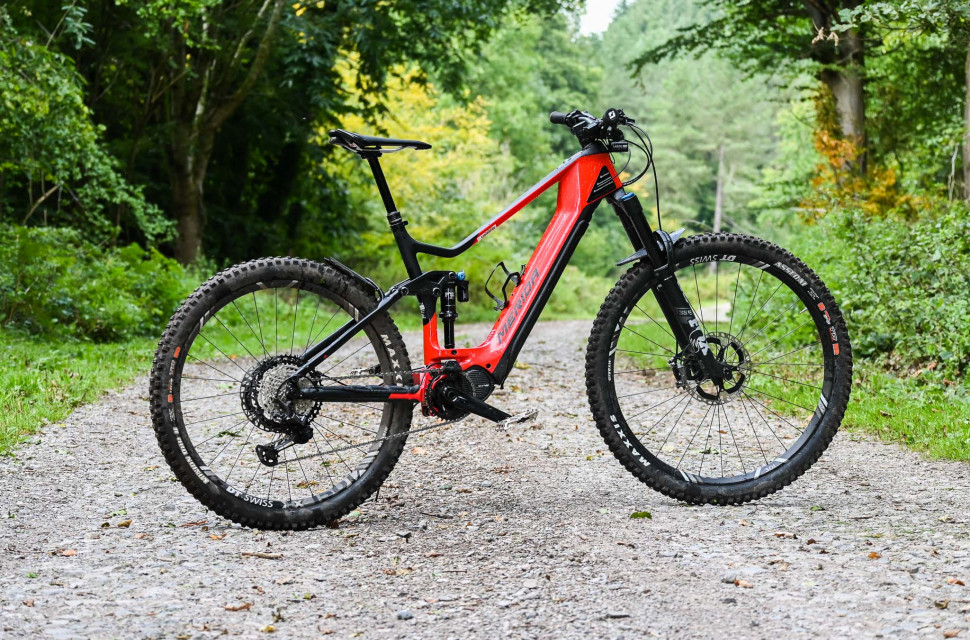 Jon Woodhouse
|
Nov 19 2020
|
Overall
Quality
Performance
Value
What's good?
What's not?
Buy if...
You're in the market for a fine handling, high-end e-MTB with the latest Shimano drive unit

Merida has updated their longest travel eOne-Sixty for 2021 with the all-new Shimano EP8 drive unit and a higher capacity battery. It delivers more power and range with refined performance and control, but it's the changes to the spec elsewhere that really let it fly, uphill and down.

The big news here is the brand-spanking new Shimano EP8 drive system. While it shares the same mounting points at the previous generation E8000 setup – the eOne-Sixty's frame is entirely unchanged – it's smaller, puts out more torque, and has reduced internal friction. Alongside the new, larger 630Wh battery, these changes give a claimed boost in range.

The unchanged carbon frame isn't really an issue – it's a solid design, and the top-spec 10K format, with it's older Shimano drive unit, impressed us previously. The front triangle is all carbon, pairing a 29" front wheel and 160mm fork to a smaller 650b rear wheel. The rear gives 150mm of bounce through an aluminium linkage driven single-pivot rear end. 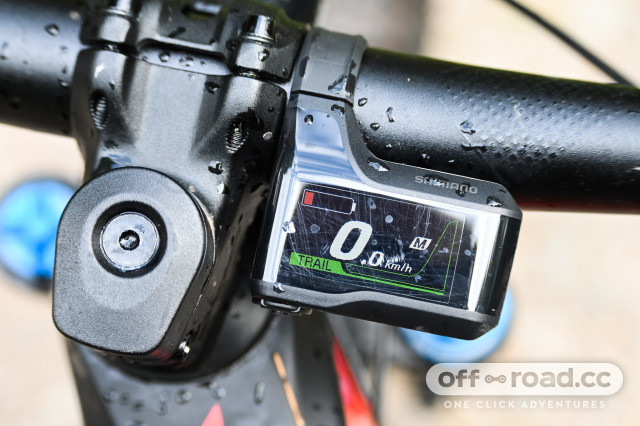 The mismatched wheel sizes might be very on-trend, but there's a more prosaic reason for them – it allows more clearance for the travel at the back.

The frame has some really nice touches, with the on-off button mounted into the top tube and the charging port sat above the drive unit. There are large vents up at the head tube designed to prevent the battery overheating by acting as a chimney for warm air, rather than as scoops to allow cool air in. 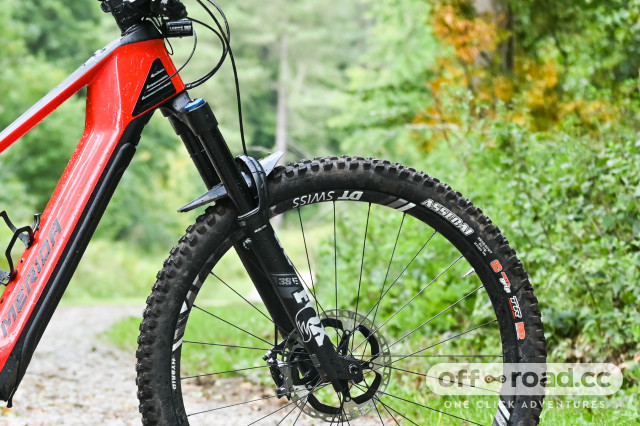 As you'd hope for the £7300 asking price, the kit is all very solid. Fox provides suspension at both ends, with a DPX2 shock and 38 fork, both in non-Kashima coated Performance Elite spec.

The shock works well and offers great suppleness, but struggles to cope with the heat generated by a hefty e-bike merrily galloping over rocks, with damping fade a possibility on very long descents. I'd rather see the chunkier X2 unit you get on the model up, but it does the trick in all but the most extreme conditions.

The Fox 38 fork is superb, however. It feels noticeable stiffer and more active under hard braking than the slimmer 36 on the 2020 bike, thanks to its larger diameter legs, burly build and the steerer tube's ovalised internal profile. The revised, four-way adjustable GRIP2 damper allows you to fine-tune setup to the nth degree, while the high-speed compression adjustment is far more usable before it becomes hand-punishingly jarring. 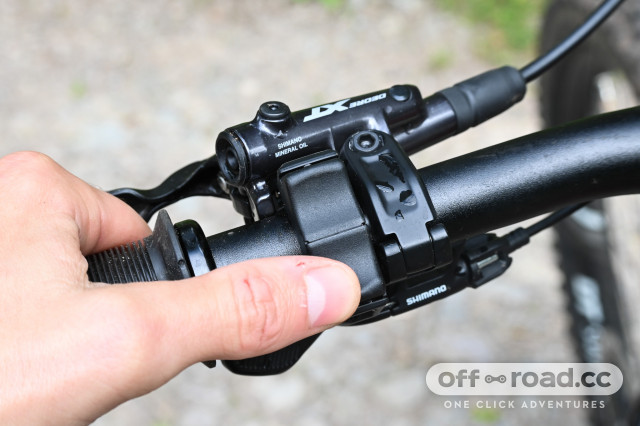 Rolling kit is from DT Swiss, with the proven and durable HX1501 wheelset spinning true after plenty of abuse. The tyres are from Maxxis, with the old model's weak point – the thinner EXO casing tyres – now cured with a chunky Double Down casing, 2.5" WT Assegai on the front and a Minion DHR of the same size on the back. 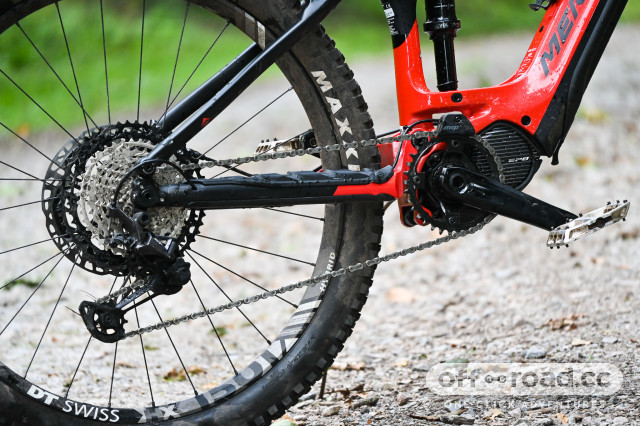 Shimano provides the stopping power, and the four-piston Shimano XT calipers clamp on 200mm rotors at either end. There's plenty of power and great feel, but I suffered issues with the bite point shifting position between pulls, which undermines confidence and control.

The EP8 unit is paired with a Shimano M8100 XT shifter and 10-51T 12-speed cassette. Shifting is faultlessly smooth and precise, even under hard load, and our long term XT M8100 review has proven it highly durable too. 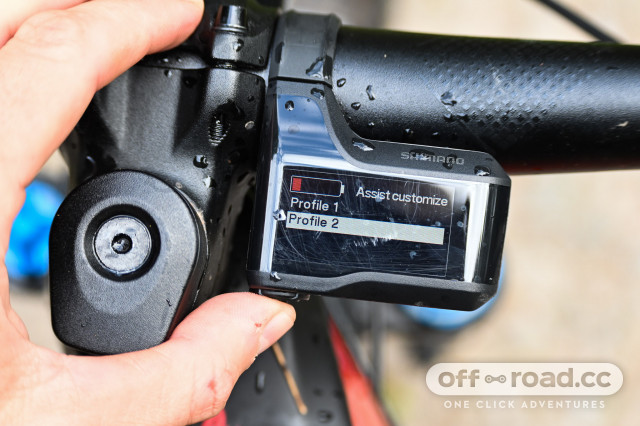 The EP8 system is also very refined, though at times it doesn't feel as muscular as the claimed 85Nm of torque suggests, and it makes a rather annoying rattle from the internal roller clutch (though that does have a very quick pickup).

It feels less aggressive and e-bike like than Bosch's competing units, but some of that is the way it feeds in power – it's much smoother than before. It's much more natural feeling, with less of a sudden kick as it feeds in, and the power tapers out at the upper-speed limit with equal smoothness.

As ever, the Shimano unit likes a nice high cadence to keep it on the boil, so low-speed grinders will need to adapt their style. 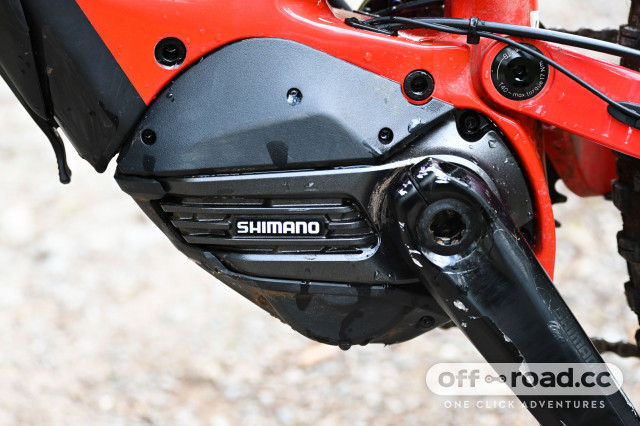 It's possible to tune how aggressively the assistance kicks in, and adjust peak torque, via the E-Tube phone app. This connects via Bluetooth and offers a plethora of tuning options for each of the three drive settings. I set everything to maximum aggression for Trail mode and, thanks to the wider range of assistance that now offers, I left it there pretty much all the time. Boost and Eco mode feel fairly redundant.

The sensitivity of the new EP8 unit to pedalling force means climbing on low-traction surfaces is much less of a frantic, please-let-me-ride-out-this-wheelspin affair than with the old unit, or with rivals such as Bosch. It's possible to ease pressure off the pedals as you go over roots or the like and then feed power back in to maintain traction instead of a sledgehammer, all-or-nothing delivery.

This does have a knock-on effect in certain areas, most noticeable technical climbing, where the assistance cuts a bit too eagerly after you stop pedalling. As a result, I often find myself stalling at the top when trying to bump the bike up a big obstacle. Yes, that's a pretty extreme use scenario for many people, but I feel there's a bit more software tweaking Shimano could do in this area.

It's worth noting you can set two ride profiles in the head unit and switch between them without using your phone.

In all-around use, the bike is superb, however. The geometry isn't extremely long in the reach at 460mm for the large I rode, but it offers a good balance with the 440mm chainstays and 65.5° head angle, while the 23.2kg mass creates plenty of stability when the going gets rough. It manages to deliver a pretty heady mix of involvement and adjustability without ever feeling nervous on descents.

I'd prefer a slightly steeper seat angle for really extreme climbing, but at 75.5° effective, it's certainly not a hindrance. 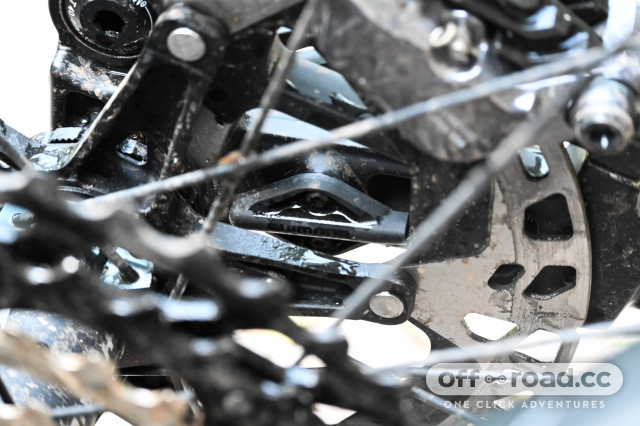 Heavier or harder riders might want a larger volume spacer to the shock to add a little more bottom-out support, but apart from that, the suspension delivers a stable and planted feel when you're bashing through chunder, but can also be popped off lips in a way that belies the extra weight of batteries and motor when you want to play around.

Talking of battery, I weigh 70kg in full kit and was getting around 1,200m of off-road climbing from the 630Wh battery in Trail setting, which is a pretty decent amount of ride time – if not quite as huge as Specialized's 710Wh offerings. 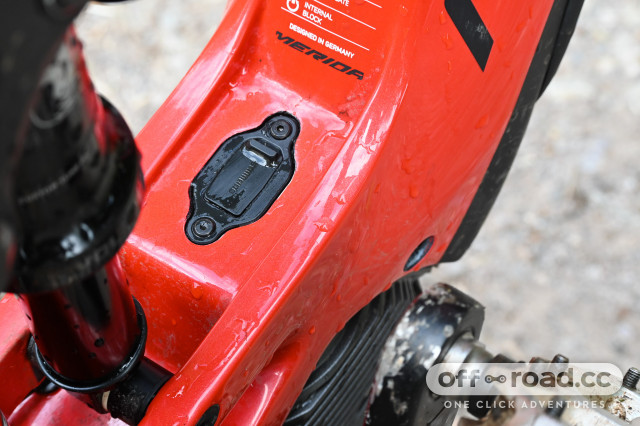 Merida has taken an already excellent bike and, with the new EP8 drive unit and some good kit tweaks, improved it. The stiffer fork and burlier rubber address the weak spots of the old bike's spec, while the same frame design delivers excellent handing and sorted suspension – with the caveat that the rear end could do with a bit more progression.

The new drive unit and bigger battery deliver range, refinement and climbing control in spades, along with greater grunt and less noise. Hopefully, Shimano will deliver firmware upgrades to address technical climbing, but as it stands, this is an extremely polished package.