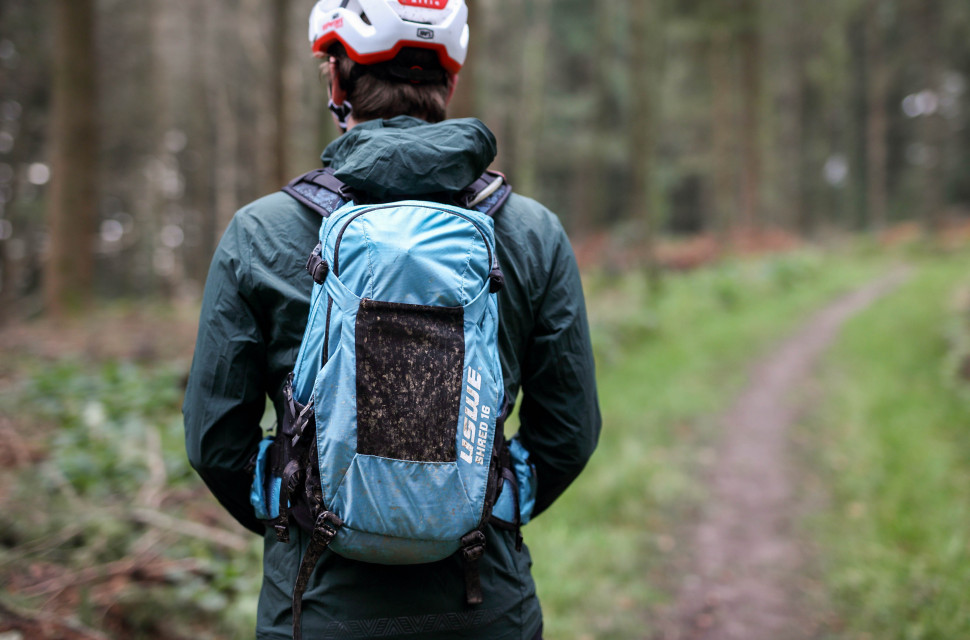 The USWE Shred 16 makes proper use of the brand’s No Dancing Monkey harness, resulting in an incredibly stable, feature-packed bag with a very respectable carrying capacity. It’s not without its caveats however as it can get pretty warm and it certainly has its quirks.

What sets USWE’s (pronounced You-swii) packs apart from other brands is the rather clever No Dancing Monkey harness (NDM for short) and Snug-Me system. It’s not quite as simple as a normal bag’s straps but it ensures a snug, bounce-free fit for a vast range of body shapes.

The bag's height is adjustable and that’s what you tackle first. The height adjustment is built into the bag’s backplate where you can separate it from the hook and loop to use the numbered guide. This bit takes some trial and error but it doesn’t take long to find a comfy fit. This feature, in itself, is great as the bag should fit whether you’re short or tall and it’ll provide enough adjustment to be comfy for women, or so USWE says. It also dictates where the No Dancing Monkey harness’s buckle sits on your chest. 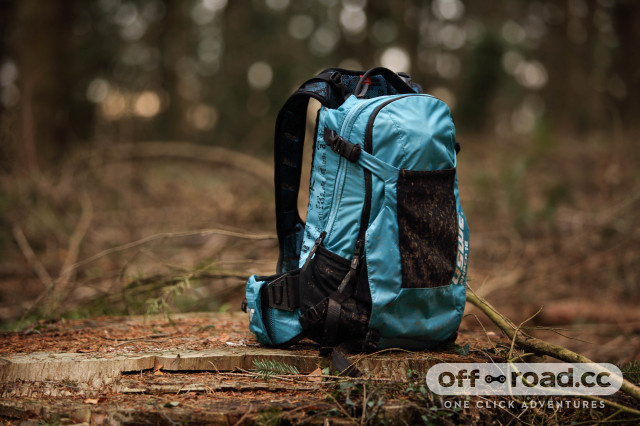 Next, it’s time to deal with the Snug-Me System, which is directly attached to the NDM hardness using elastic to allow for chest expansion when breathing. Simply grab either end of the lower straps, stretch them out equally to snug up the NDM, and clip the buckle together. The Snug-Me system is where a little confusion, for lack of a better word, can occur. Cinch one side of the strap up a little more than the other and you’ll be left with an uneven, wonky bag. 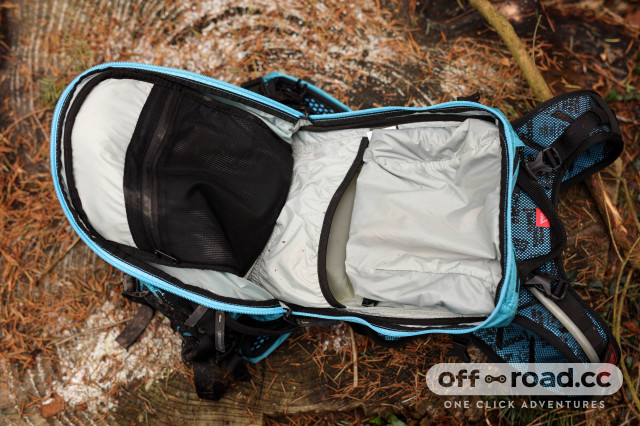 Once adjusted to fit properly, the system works incredibly well. It’s designed to not move around while you’re riding and that’s exactly what it does. Even through techy chunk and mild airtime, the bag remains perfectly stable, regardless of how much, or little it’s carrying. 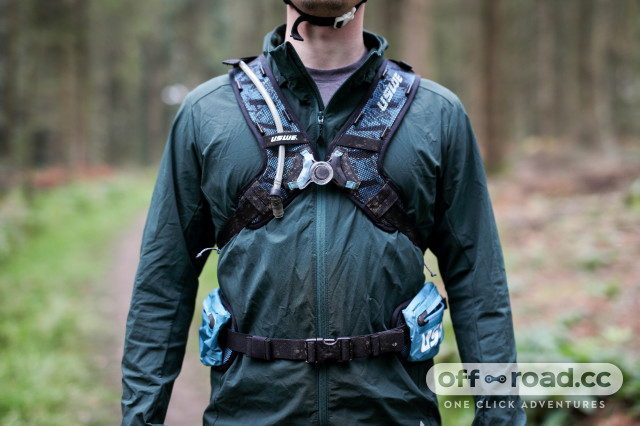 It’s really easy to operate too. It literally takes a tap of a mechanism that reminds me of Tony Stark’s Arc Reactor to undo.

Of course, the Shred 16 isn’t just about the NDM + Snug-Me harness as it comes sorted with features that you would expect to see on a pack of this price. Firstly, it rocks a helmet carrier, body armour attachment points, a rain cover, a huge microfiber goggle store, LED-light attachment points, and its capacity can be expanded thanks to aftermarket pockets that attach to the harness.

USWE has built ventilation into the back panel and the bag straps. However, because the NDM + Snug-Me System holds the bag so close to the body, airflow is negligible. There’s simply not enough space between the bag and the body for air to work its way around. Even in the midst of winter, I’ve been left with some mighty sweat patches. That’s similar for the straps too. There’s clearly some ventilation built-in but it’s not really enough, especially when this bag takes up so much real estate.

The downsides don’t stop there either. If you’re partial to a bit of GoPro action then you'll need the £38 aftermarket Action Camera Harness, as the bag's chest buckle interferes with chest mounts. Although, it’s great to see the USWE offers an action camera mount especially for the bag. 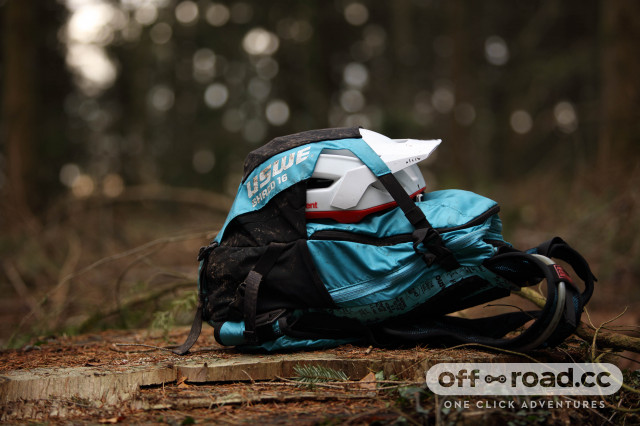 As its name suggests, the Shred 16 comes with a 16L carrying capacity. It’s spread between two belt pockets, one of which is an organizer pocket ideal for tools. The main compartment is pretty sizeable with a divider for the hydration bladder to sit within (although, the bladder isn't included), happily becoming home for jackets, lunch, or even a spare pair of shoes. All of that can be cinched down with a variety of straps around the bag, so it's easy to compact.

And like I’ve said before, even when fully laden, the Shred 16 has remained totally stable. It just doesn’t shift and it’s quickly forgotten. Never has it knocked the back of my head when rolling into steep sections and generally, ignoring its warmth, it’s super comfortable. 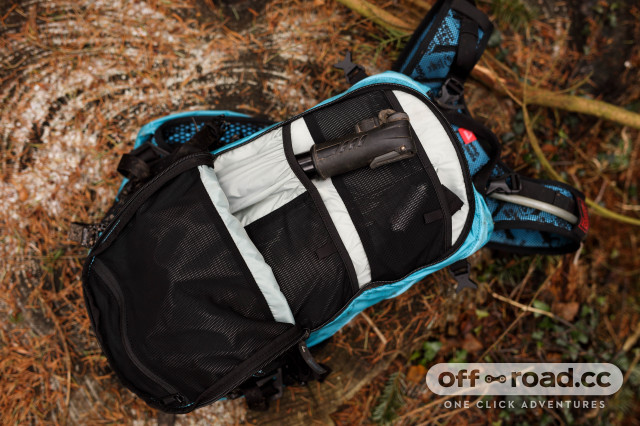 It’s competitively priced too, at £154. Though, bags like EVOC’s FR Enduro Protector backpack and the Camelbak H.A.W.G, are both priced at £155. However, you can line up those bags and think about what you’re really after. If it's stability, that’s where the Shred comes in. Then if it’s back protection, the EVOC takes the roll, and if you’re looking to save on a bladder, in steps the Camelbak.

If you’re looking for a massively stable backpack that’s comfortable, can carry a day’s worth of kit and you can cope with some extra warmth, the USWE Shred 16 ticks all of the boxes. You will have to buy a hydration bladder separately and deal with a bit of faff when fitting the bag but its stability even through the roughest of sections even when full of biking tat, can only be praised.

USWE says, "SHRED is the high-end Daypack with an outstanding comfort fit, that you bring to your favorite freeride bike adventures. The pack is equipped with our bounce free No Dancing Monkey™ 2.0 + Snug-Me harness system and waist support belt that makes the pack stay put on your back without cramping your style. With its ventilated and multi-size adjustable back panel, it’s very easy to match for an individual fit and performance. Geared up with a several smart storage compartments, a helmet carry system and armor attachment points." It's definitely high end but it's also very comfortable and its fit is adjustable.

A clearly well built pack that's shown no signs of wear during the test period.

Does exactly what it's designed to. It's mega stable and can carry a lot of kit.

Shown no signs of wear during test period.

A very comfortable pack. It fits snug and it's easily forgotton. Although, it does get warm.

Slightly cheaper than some competing packs but it doesn't come with a bladder, or the back protection that we're seeing on packs only a few pounds pricier.

Does exactly what it's designed to, it's stable and can carry a lot of stuff. It can get warm and if you like riding with a chest mounted action camera, you'll need to throw in another £45 for the USWE attachement.

The comfort and stability

A solid pack that's stable, comfortable and comes with a good capacity. It has a few foibles in its warmth, compatibility with action cameras and it would be good if it came with a bladder.