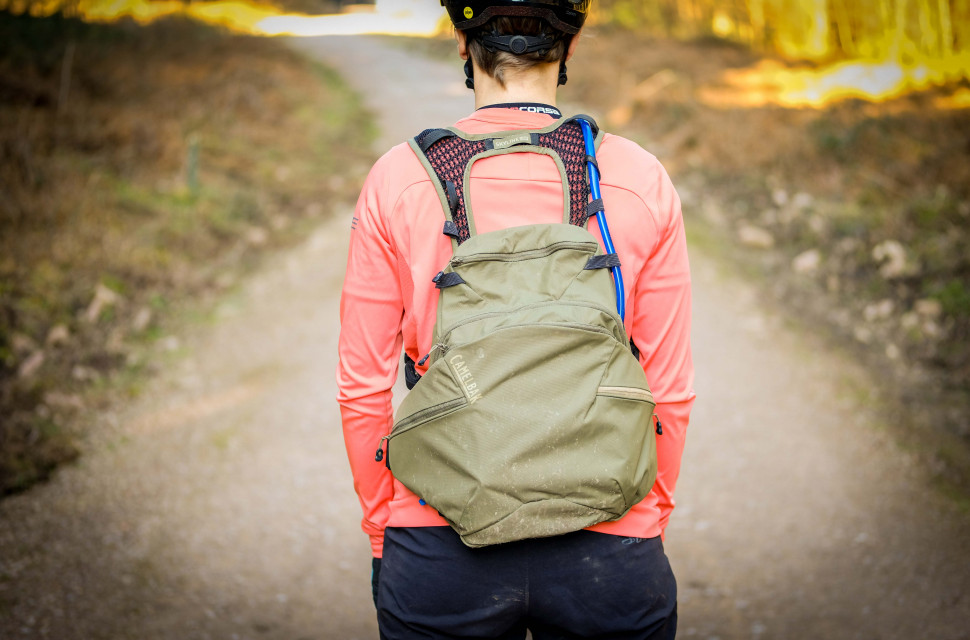 The updated 2020 version of the CamelBak Skyline LR10 pack is less comfy, less well organised and less stable than its predecessor. It cools really well and looks great, but in all other respects we'd much rather ride with the 2019 version.

The CamelBak Skyline sits in the Low Rider (LR) range of mountain bike packs, and with 10L of storage and a 3L bladder, it's a roomy trail pack for day-long rides.

In 2019 I tested the women's version of the Skyline – the Solstice, with its reshaped straps – and it earned 4.5 stars out of five as a secure and versatile pack. So I was excited to see how the 2020 Skyline has improved on that. 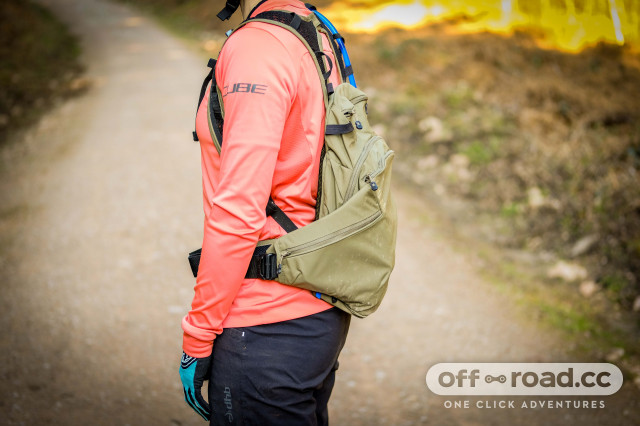 Unfortunately, it hasn't. The new minimalist look is cool – it's certainly a head-turner – and the dual-wing belt has great promise, but the updated design is hampered by flimsy, uncomfortable shoulder straps. 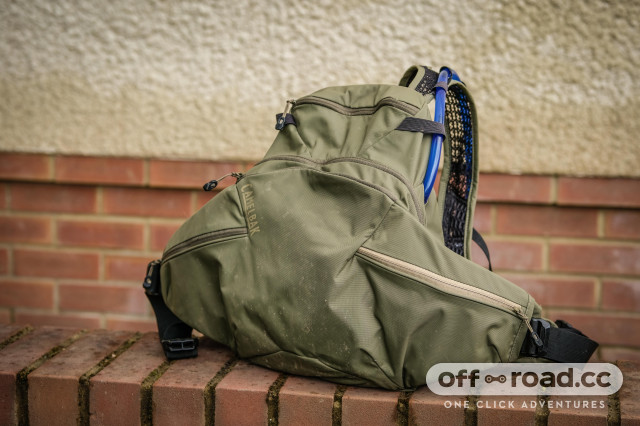 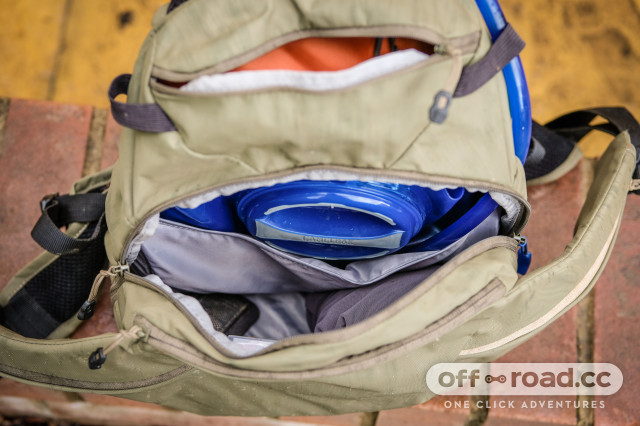 The 2020 Skyline gets a three-litre Crux bladder, and it's stored away from your back in a zipped section. There's also room here for extra gear, especially if your reservoir isn't filled to capacity. There are no other storage sections though so your pump, shock pump, and tool roll hang loose in there alongside a jacket or other extra layer.

There's a smaller front compartment with one flat inner pocket sized for small snacks or wallets. Up top, there's a quite a roomy zipped pocket with a hanging hook for keys. Finally, there are two large side pockets on the 'wings', and though they sit high they're easier to reach than it looks. 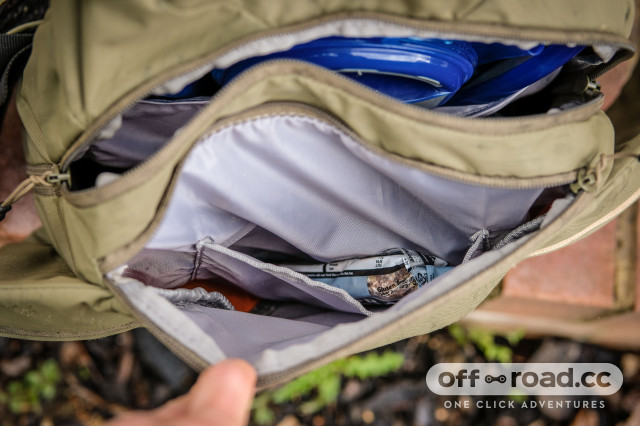 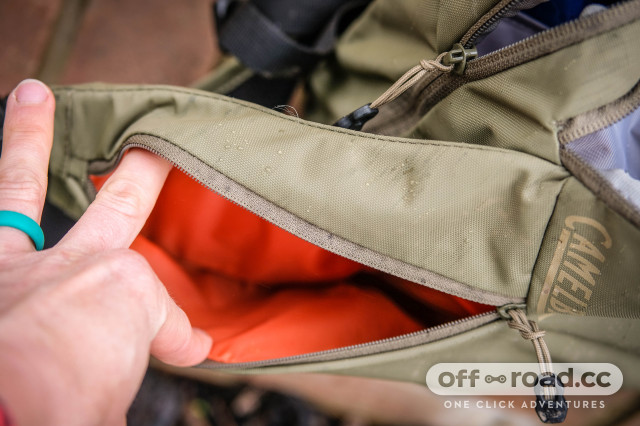 The pack is secured in the main part by the Dual Wing belt, which features an inner strap that spreads load onto your hips, and an outer one that squeezes the pack contents tight and features the extra pockets in its 'wings'. It's kind of like a big wraparound belt.

I think the idea has potential, as it cinches everything in while distributing pressure evenly. No one needs heavy items sliding around mid-corner, and the Skyline keeps your stuff very secure. 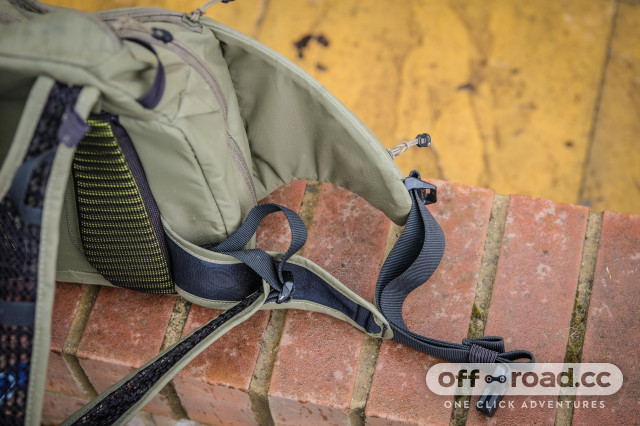 The shoulder straps let the pack down though. They're thin, which is great for an almost sweat-free airflow but bad for weight-bearing, and personally I'd take some padding here. The flimsy mesh is uncomfortable with heavy loads, and despite the low rider design shifting weight to your hips, the shoulder straps still need tightening to stop the top section peeling away and wobbling. 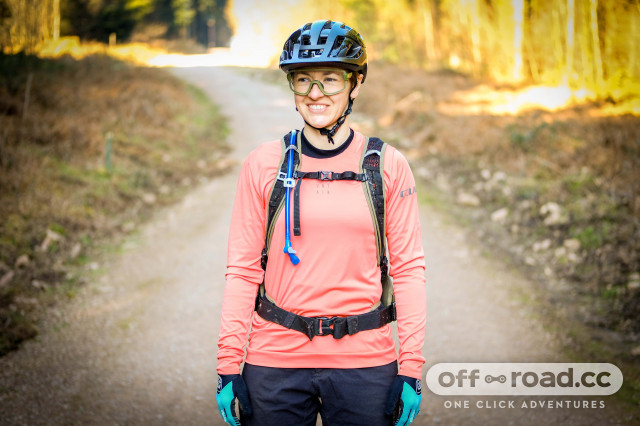 Lastly, the Skyline doesn't sit well on every length of spine. There's a bracing strap that digs into the back of my neck unless I wear it lower on my hips than I'd like, though you, of course, may not suffer this. This is officially a unisex design, though potentially the women's pack would be differently-sized. 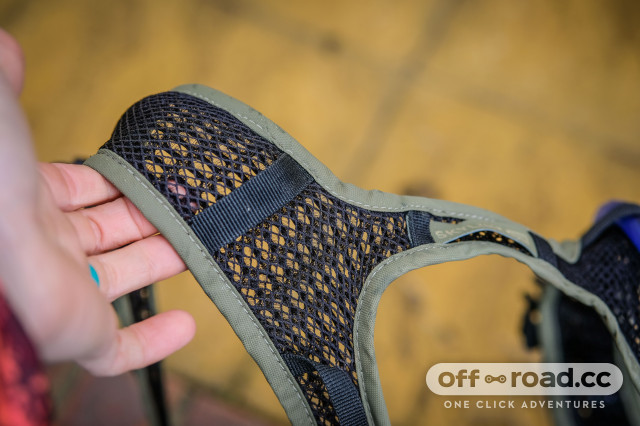 One thing that has been improved is the rear panel, as pronounced ridges allow good air circulation and cooling, while the Magnetic Tube Trap makes securing the bite valve as easy as always.

The CamelBak Skyline has potential, but last year's pack is better organised and more comfortable – and the remaining stock is likely to be available for less than the 2020's £115 asking price. This new Skyline distributes weight well, but stuff the pack full and it gets uncomfortable and/or unstable, making it hard to recommend for anyone but those who habitually travel light.