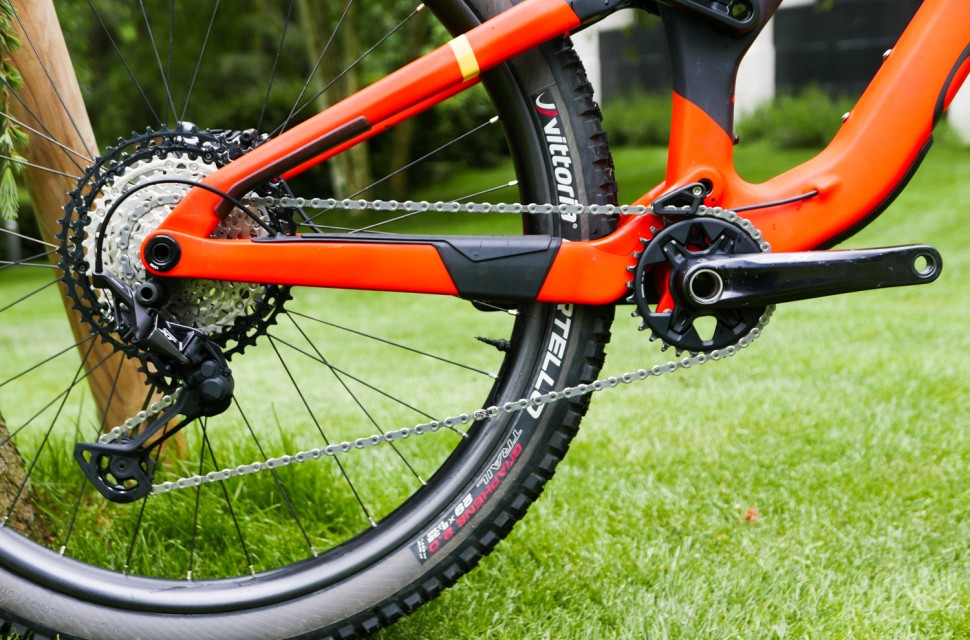 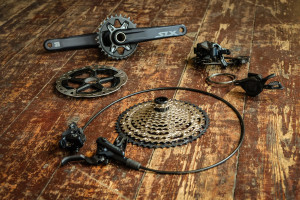 Shimano has radically expanded its 12-speed mountain bike offering with not just one, but two new groupsets, with M8100 XT and M7100 SLX joining the previously released M9100 XTR groupset, sharing much of the wide range cassette and brake technology of the former, just without the big price tag.

It's safe to say that Shimano has been on the back foot with its mountain bike groupsets in recent years, with SRAM's super wide range, single chainring only 12-speed Eagle groupsets setting the benchmark. Shimano caught up in mid-2018 both numbers of gears and range with the flagship M9100 XTR groupset, but that's been plagued by late delivery issues - it's still not possible to buy a complete groupset as we publish this.

In that time, SRAM has managed to take the wide range Eagle technology down to the sub £400 drivetrain NX Eagle level - and below with SX - gaining a huge amount of original equipment specification on complete bikes in the process. That means that Shimano really does have it all to play for, which explains why they're breaking their usually inflexible product launch schedule to offer up two completely new groups in one go.

So what's the deal with XT and SLX?

In Shimano's usual fashion, much of the technology from that flagship XTR groupset has trickled down to the more affordable XT and SLX levels. For those unfamiliar with Shimano's lineup nomenclature, cost decreases and weight increases in that order. 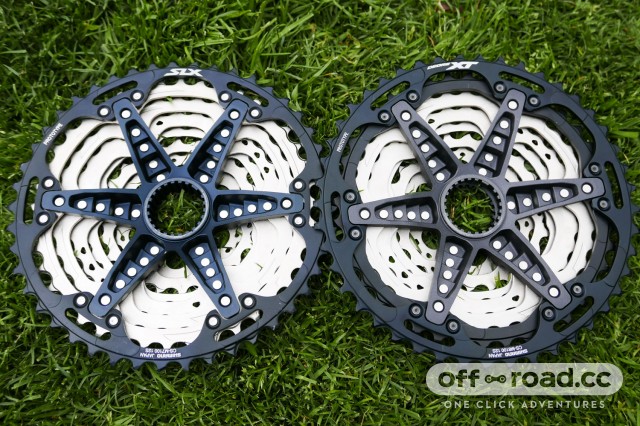 The key things are that it's now possible to get a 10-51T cassette with any of those groups, though you can also get a more closely spaced 10-45T option if you prefer tighter steps to overall range. As ever, they use Shimano's Hyperglide+, which consists of finely detailed ramps on the sprockets to aid smooth shifting and overall quietness and refinement.

All require the specific Micro Spline freehub interface that Shimano licenses out to specific manufacturers, as well as offering their own hubs. 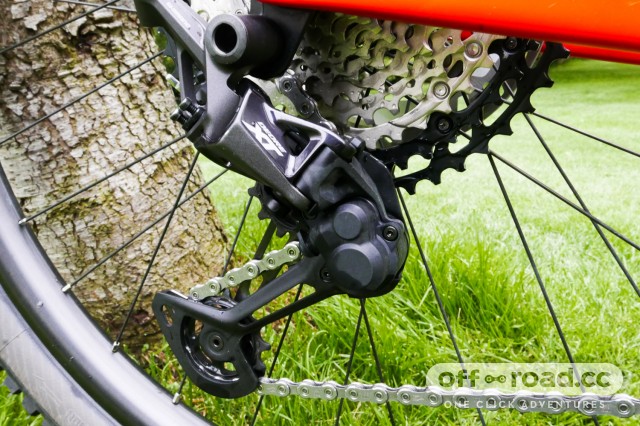 The wider range, in turn, necessitates a new mech design, with adjustable tension, switchable clutches across both XT and SLX. Because - get this - it's possible to run a double chainring crankset with the narrower cassette either group for a 2x12-speed setup, there are both long and short cage options. 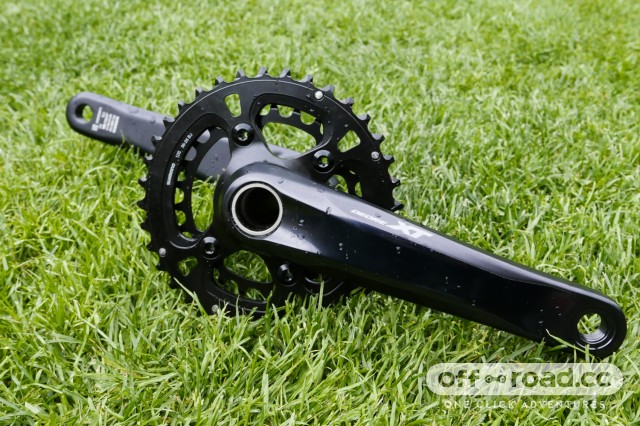 Talking of chainsets, the single ring option is available with 28T, 30T, 32T, 34T and 36T direct-mount chainrings on offer, all of which are interchangeable between XTR, XT and SLX. There are 165mm, 170mm, 175mm and 180mm length arms and there are both Boost, non-Boost and 157mm 'Super Boost Plus' spacings on offer.

Hollow forged aluminium crank arms are still the order of the day, as is their 24mm Hollowtech 2 axle and bottom bracket setup, with both threaded and Press Fit 92 available. Unlike XTR, neither group has a dedicated bottom bracket, but that's no great hardship

The single chainrings use Shimano's take on narrow-wide teeth, which they call Dynamic Chain Engagement+. They claim the specific profiling they use helps spread load evenly across chain and teeth for a smooth and quiet ride as well as good chain security.

If you still want a double (no, we've no idea either) then you can get a 36-26T option in Boost and non-Boost spacings for SLX or XT but you'll be restricted to the smaller range cassette anyway.

One of XTR's big changes was the shift to a brake lever that featured an additional point of contact with the bar, with a protrusion that contacted nearer the grip in addition to the clamp. That's said to help boost level stiffness when you're hauling on it, which in turn means better modulation.

As you'd expect, this has now arrived with both SLX and XT having this feature, plus the choice of lighter, twin-piston callipers or chunkier four-pot items for those with a descending bias. The pads of the former are the same as they've been for the other two-pot brakes for a while, while the four-piston items are the same as the new XTR stoppers, though both finned and non-finned options are available.

Much like XTR, which introduced a new version of Shimano's i-Spec bar and shifter integration, the new groups get a setup that allows you to use a single bar clamp for both your brake and shifter, but now with the ability to adjust positioning laterally as well as rotating for angle.

They're both a bit less adjustable than XTR with a 20-degree rather than 60-degree rotation angle, but that doesn't seem like a great hardship.

What are the differences between XT and SLX?

While most of the technical features are the same, the construction and some details vary between the groups.

First up, the price difference. An XT drivetrain without brakes sits at £535 for a single ring setup while the comparable SLX setup would be £340, both without bottom bracket which would be £33.

Shimano claims the weight difference between the two groups is a mere 148g, with XT being 365g heftier than a comparable XTR setup. 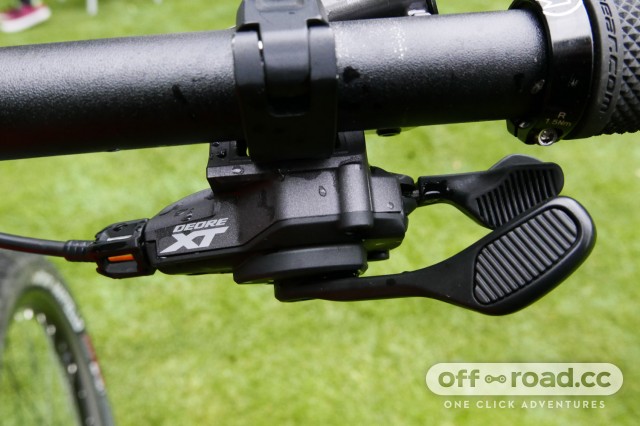 There are some technical details which differ. First up, the Shimano XT shifters have a nice little rubberised pad on them, which SLX lacks. It's also possible to do multiple shifts down the cassette with the Multi-Release feature on XT, while SLX is limited to one gear down the block at a time.

The XT brake levers get the ability to just the free stroke, namely where the lever sits from the bar before you pull it. Both, however, get a tool-free bite point adjuster. All the callipers, whether two or four piston, are interchangeable with the levers, so you can mix and match to your heart's content. 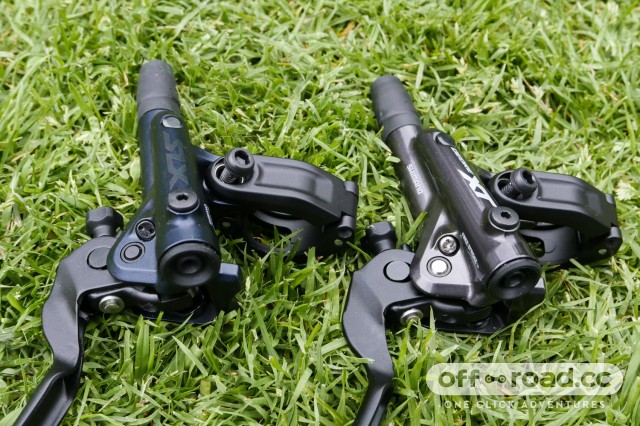 While any XT level disc rotor, whether six-bolt or Centrelock, will come with their laminated 'Freeza' rotor design, SLX only has a dedicated six-bolt, all-steel rotor, so you'll need the XT one if you want to run Centrelock. 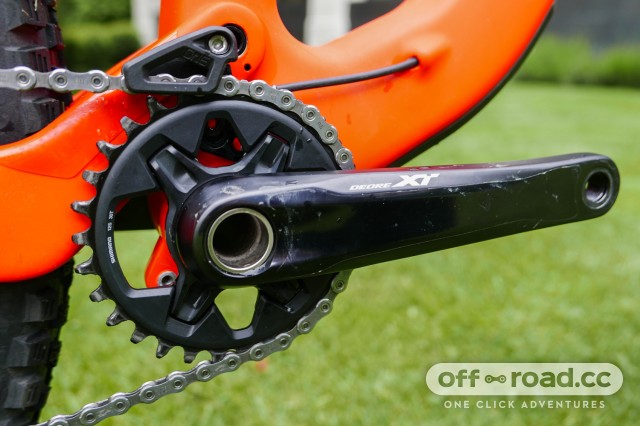 While the rings are interchangeable, there are fewer SLX level single ring options with only 30T, 32T and 34T on offer, while XT gets you a 28T and 36T option.

This has been a big issue with XTR, but things are promised to be different this time, with XT slated to arrive in UK stock from the start of June, while SLX should turn up nearer July. We'll be getting both groups in for test as soon as we can, regardless...