Skip to main content
Log In Register
We take a spin on the new Merida One-Forty, equipped with wild geometry and brimming with cool kit 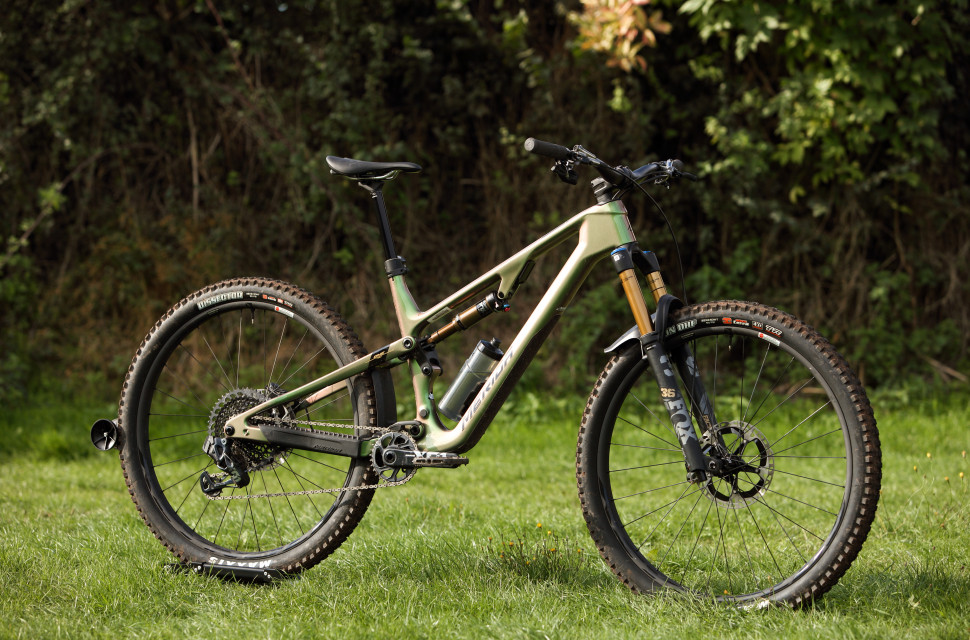 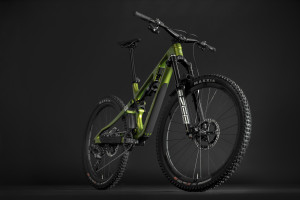 Merida has just launched the newest iterations of the much-loved One-Sixty and One-Forty mountain bikes, and I was to Minehead and the EX Enduro to put the top-of-the-range One-Forty 10K through its paces. What better way to test a bike than between the tapes? Read on to find out my first impressions.

It probably goes without saying but the Merida One-Forty of old got a little bit long in the tooth before its drastic update. To remedy this, the brand has firmly pushed the boat out, putting the bike through its most dramatic development and testing cycle to date. It's even claimed that the One-Forty and One-Sixty are the most technically advanced, best mountain bikes it has ever produced. 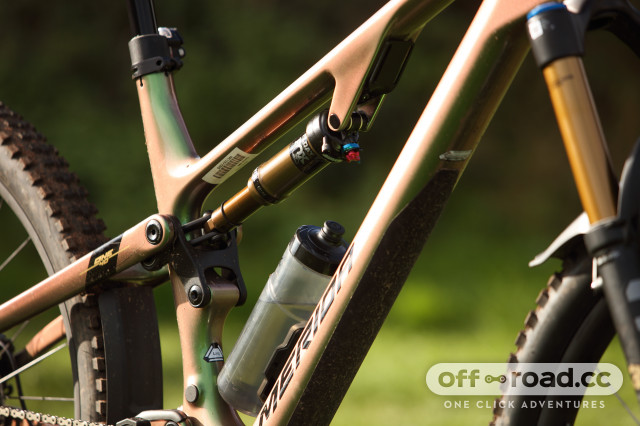 As for this First Ride, Merida gave me the One-Forty 10K, the blingiest bike in the range but, of course, it's not just about the very cool kit hung on the rig. The new bike benefits from the brand's new FAST suspension kinematic that gives the bike 143mm of suspension at the rear, with the front squish being bumped up to 150mm. This particular bike is a full 29er but it can be equipped with a 650b rear wheel while retaining its new geometry thanks to a flip-chip located within the linkage. 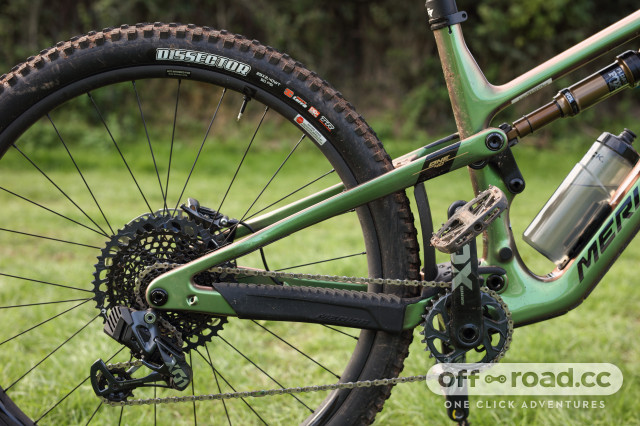 It is at the rear where things get really interesting. The One-Forty boasts the P-Flex flex stay design that we first saw on the Ninety-Six and it may be the first time we've seen a flex stay on a bike that hasn't been designed for cross or down country. This design replaces the pivot on the seat stay with some specially designed flexy carbon. Not only does this reduce the overall weight by a few grams but it also makes the bike simpler to maintain. This tech is found on both the carbon and alloy models. 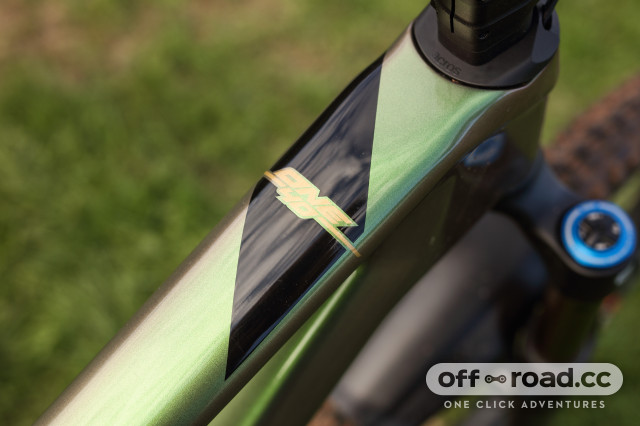 The most exciting feature about the new One-Forty, I think, is the new Agilometer geometry concept it has adopted. With this, the rider no longer refers to their height to pick the size of their bike. Now, it's all about the reach measurement and ride characteristics. Merida has gone as far as changing the names of the sizes from Large to, for example, "long". This new system lets the rider choose between an agile and a stable ride without having to think about their height. 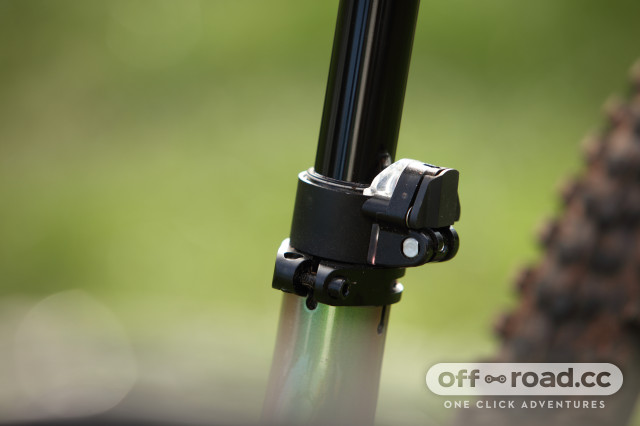 And instead of lengthening the seat and head tubes to offer a better fit, Merida has kept these short across the size range. Instead, this new geometry concept is aided by the fancy new Team TR dropper post that offers travel adjustment from 30mm up to a whopping 230mm. It's found on every size which allows the rider to tailor the dropper to provide the most drop possible regardless of the size of the bike and rider. The bike will also come with a lot of steerer tube so you have a lot of room to raise your cockpit and there will also be high-rise bars available.

Each size gets a specific suspension kinematic that offers more progression as the bike gets larger. This is to better suit the taller and weighter folk who will generally choose the longer frames, according to Merida.

Onto the geometry itself, and the progression envelope has been torn right open with a machete-shaped letter opener as on this size Long bike, there's an incredibly stretched 509mm reach paired with a steep 79-degree seat tube angle. Then there's a 65-degree head tube angle and a 437.5mm chainstay. This all results in a 1265mm wheelbase. There's no getting away from the fact that this is quite a wild shape, especially for a 143mm traveled trail bike. 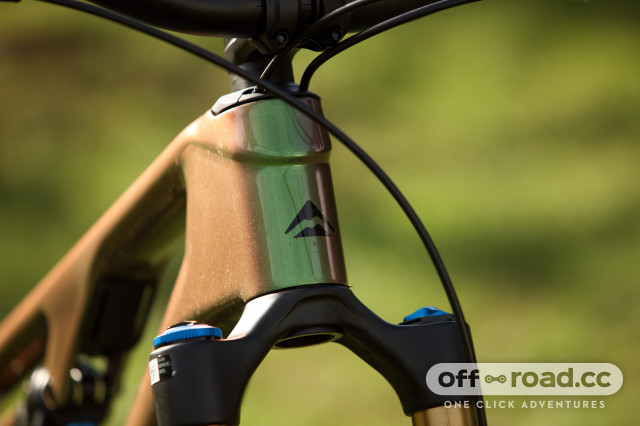 To find out more details about the new One-Forty and One-Sixty click here.

The 10K is the maximum posh, top-of-the-range One-Forty and it comes draped in kit that'll make even the snobbiest of riders' mouths water. Of course, it's all built around a carbon frame and handling the 150mm of front travel is a Fox 36 Float Factory fork with a GRIP2 damper. The rear suspension is damped by a Fox Float DPS Factory shock. 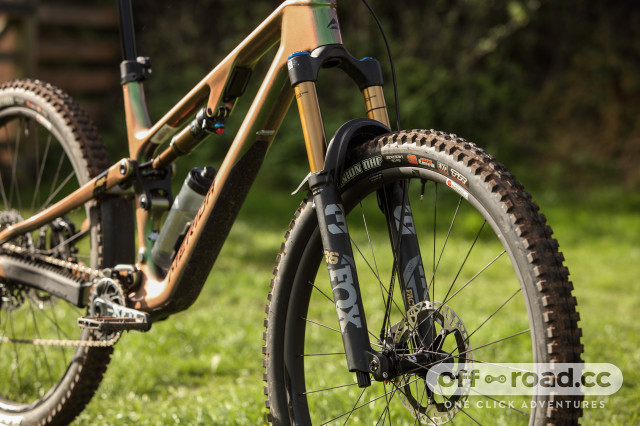 Shifting is provided by SRAM's wireless X01 Eagle 12-speed AXS drivetrain which is paired with Shimano XTR four-spot brakes. Notably, there's a 203mm brake rotor at both ends of the bike. 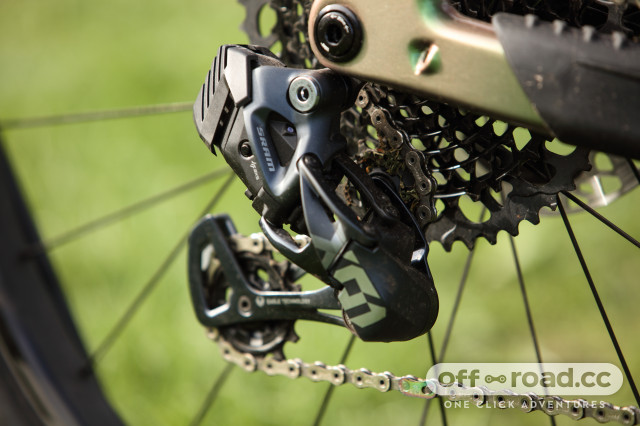 The bling doesn't stop there as this build rolls on a pair of Reynolds BLACKLABEL 329 Trail I9 wheels that are shod with a 2.5in Maxxis Minion DHF at the front and a 2.4in Maxxis Dissector at the rear. Thoughtfully, Merida has specced an EXO casing for the DHF and an EXO+ for the Dissector which saves unnecessary weight but adds useful protection where needed; top marks for this inclusion. 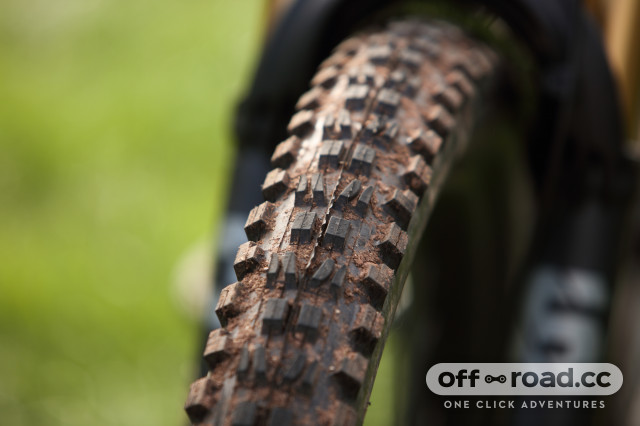 The bike comes with an under saddle multitool and a number of Allen keys are found on the rear thru-axle's handle. Speaking of tools, there's a neat tool sleeve that fits in the downtube that is home to a pump, a tubeless repair kit, and anything else you manage to stuff into it. While I don't have a weight for this Long size, it's claimed that a Mid-sized frame will tip the scales at 14kg.

With such a high end spec, this bike will cost a pretty penny of course. A round £8,000 to be exact but builds start at a very reasonable £2,250.

It goes without saying that One-Forty's geometry is rather different. It's mighty long but because of its very steep seat tube, when seated, the length is very well hidden. In fact, the bike feels surprisingly short when perched above the pedals. It actually took a little while for me to get my head around, but these radical measurements result in a bike that's an absolute machine when ascending and descending. 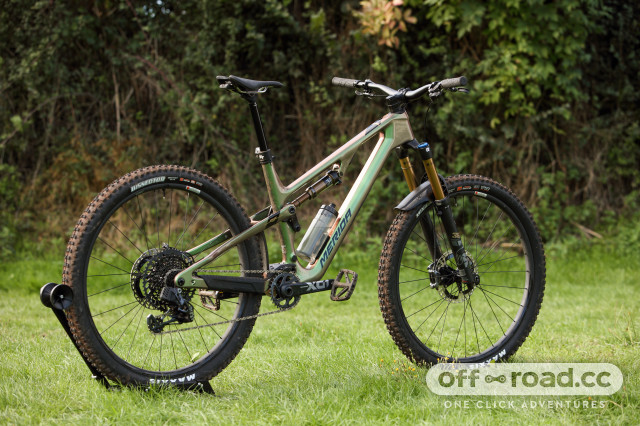 Pedaling up a hill in the saddle, the steep seat tube places you almost directly over the pedals which isn't only an efficient place to be but it plonks weight fairly centrally on the bike. This pays back in dividends when climbing because there's almost no need to manage weight distribution, even on the steepest of inclines. It's simply sit and spin.

With such a steep seat tube, I was worried that it would perform similarly to the Stif Squatch, which put weight a little too far forward over flatter traverses which made flat tech tricky to navigate. It can be quite hard to lift the front wheel because it's so well weighted. However, the One-Forty is 29mm longer in reach, its front wheel is that bit further ahead and weight is more evenly distributed, making it easier to lift when required. 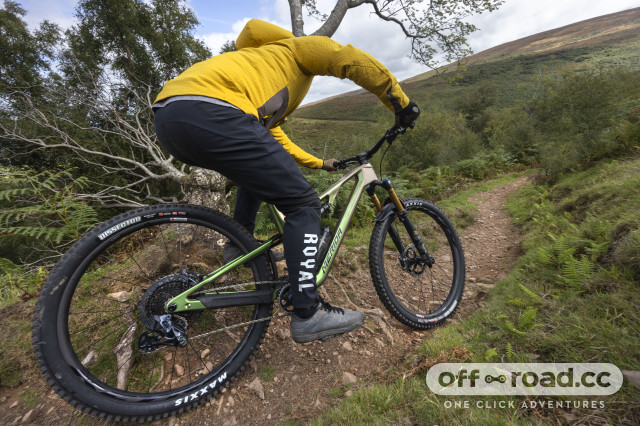 The bike's suspension kinematic offers a good heft of efficiency too and when paired with its rather quick rolling tyre combination, the One-Forty is a pleasure to crank up a hill.

Out of the saddle, the bike shapeshifts into the full aggro ripper it is. Its length becomes clear and the stability it offers is nothing short of impressive, encouraging almost ridiculous straight-line speeds with unwavering confidence. Again, the rear suspension has been very well considered as it boosts the bike's descending prowess, balancing its typical trail bike mannerisms (I'm talking poppy, supportive and engaging) with a planted feel when hauling. 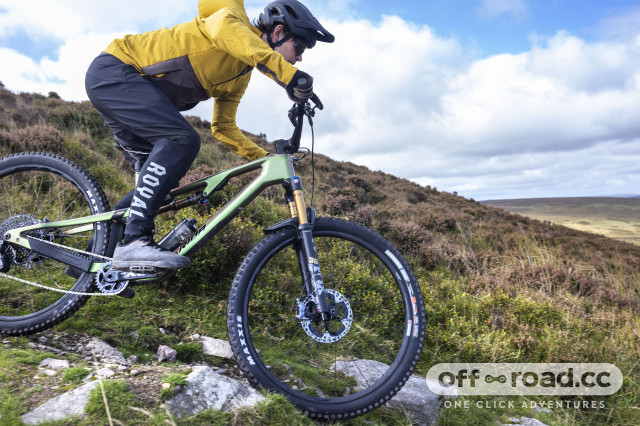 The suspension platform is incredibly sensitive to small bumps, so trail chatter is almost nothing to worry about. The mid-stroke is welcomed with a great level of support and the depths of the travel are met with excellent bottom-out resistance. This is with the suspension set at around 30% sag. As I said, the platform generally feels very much like a 'trail bike' kinematic because it blends the support and fun factor of its relatively short travel with a predictable and stable ride when the speeds ramp up.

Although, I did notice that the rear end had a tendency to firm up under heavy braking. While it's probably not fast, performance-wise, swinging the firm rear end around loose corners is awesome fun, and let's face it, this bike isn't designed for out-and-out racing, so I can forgive the One-Forty here, especially as it works so well when it matters. 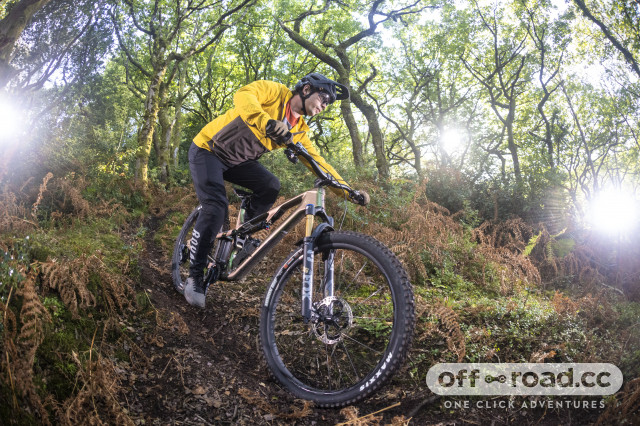 Back to the bike's geometry, as that's what is really special about the new iteration of the One-Forty, that lengthy reach makes for a very supportive front end when the trail gets steep. Paired with the stability on offer, it's an incredibly confidence-inspiring ride. In areas where I would usually expect to feather the brakes, the One-Forty has consoled me into keeping my fingers away from the levers and embracing the speed.

It can be expected that a bike of this length can be rather tricky to corner and when the turns are especially tight, it does take a bit of extra brain power to whip around. But because of that long reach, it's encouraging to ride the front end and let the rear follow. It's welcoming of being pushed firmly into berms and ruts, too, thanks to the more stretched-out riding position it offers when standing on the pedals. 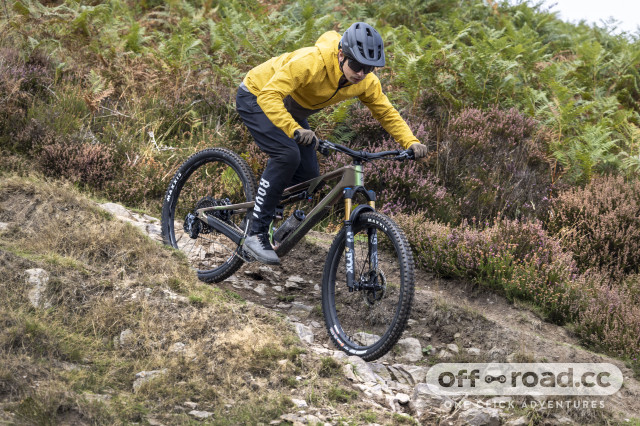 When smashing on the pedals there is a hint of lateral flex in the frame but when the wheels are as stiff as they are, it's actually rather useful. Through long sweeping corners, it helps the bike conform to the trail, making for a very steady ride. The flex, when paired with the bike's wheelbase, also helps during times when traction is sparse. I've surprisingly managed to hold brief two-wheel drifts and regain grip without letting out so much as a squeal because the wheels are so far apart, making slides easy to control, and the smidge of bendiness helps the tyres hunt for valuable traction.

So far, the new Merida One-Forty 10K is a bike that I've really gelled with. It's confident at speed but respectably manoeuvrable and I'm a big fan of the bike's clear trail bike behaviour, matched with a shape that is often reserved for enduro bikes. Its almost shape-shifting geometry and solid suspension platform make for a bike that's comfortable to pedal around all day but a force to be reckoned with once the descents start rolling in. Hopefully, we'll have a One-Forty in for a more in-depth test coming soon.