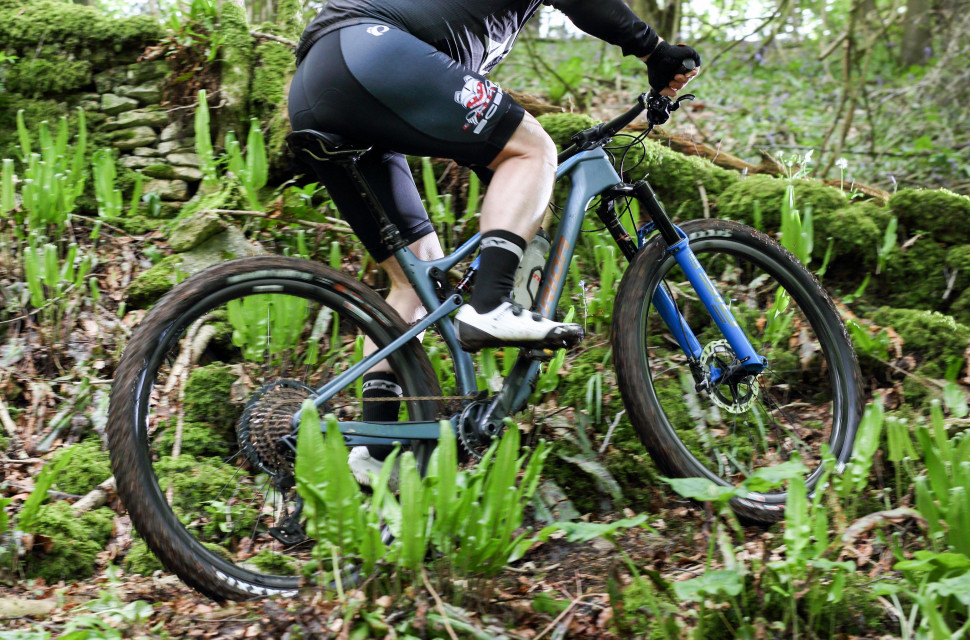 'Down-country' is the recently adopted term for an XC full-suspension bike that's been tweaked to offer more poise and ability when the terrain gets technical and gravity kicks in. In real terms, this means a slacker geometry, longer suspension travel and bigger profile tyres over its RC9000 brother. 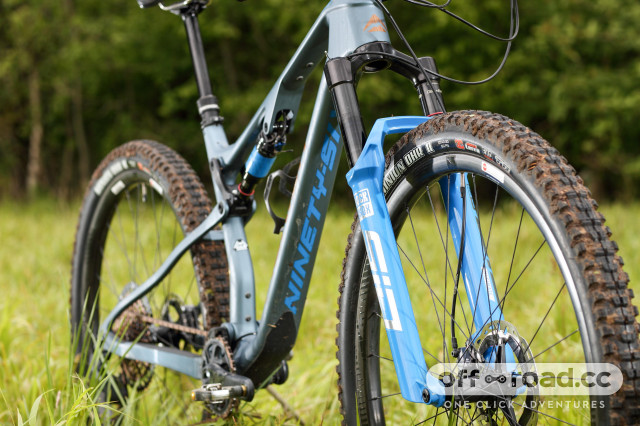 There's no doubt that the carbon frame of the 8000 is a lovely design. The frame is fashionably long, low, and slack. The beefy headtube area promises strength and stiffness, while the tubing is broadly oval in cross-section. The top of the headtube is sculpted to lower the height of the upper headset bearing and consequently the handlebar height – something which you'll appreciate if you prefer a low front end. All cables are internally routed through the frame, and there's enough space within the front triangle for two bottle mounts.

The bike comes fitted with a 60mm Team CC stem and flat 740mm wide carbon handlebars. The suspension lockout is a RockShox TwistLoc unit that locks both front and rear suspension simultaneously. It works but is a faff to set up, and, for some reason, RockShox specs a stupidly small 1.5mm Allen bolt to lock it to the bars, which is easy to round out. 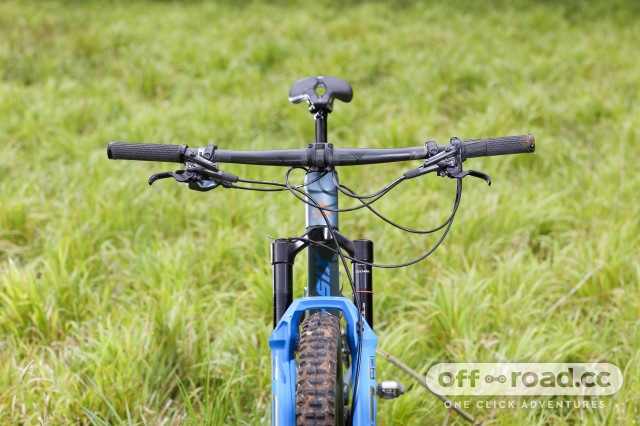 As is the norm these days, the Merida Ninety-Six 8000 comes equipped with a dropper seatpost, which is operated by a perfectly working underbar remote lever. On top is a Prologo Scratch M5 PAS saddle, which looks hard and angular but provides a good deal of comfort.

SRAM GX supplies 175mm carbon cranks fitted with a 34-tooth chainring, ditto the shifter, Eagle rear derailleur, and the ubiquitous super-wide 10-50 Tooth Eagle cassette. Still, given this model's intention to be pushed harder on descents, a 32t may be a better choice for mechanical advantage. The cranks are solid and reasonably stiff, though I wonder about the 34t chainring choice; it's perfect on the XC version of this bike. 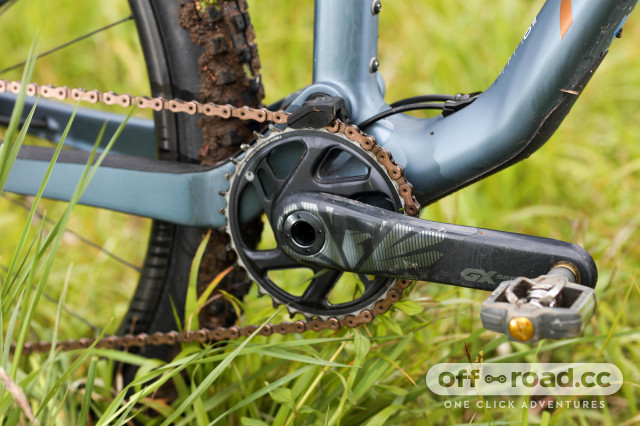 Shimano is on braking duty, with XT units. In a nod to the rowdy potential of the down-country 8000, Merida has specced a four-pot post-mount calliper with a 180mm Ice Tech rotor up front and a two-pot flat mount with a 160mm rotor on the rear. Overall, there is nothing to complain about here, and the blend of SRAM and Shimano has been done the right way that fits together seamlessly.

A RockShox SID Ultimate air-sprung fork up front and the matching SID Luxe Ultimate rear shock work to keep your rubber in touch with the trail. Both units can be locked out at the same time by twisting the RockShox Gripshift lockout unit. A handy feature for long smooth climbs or liaison sections of tarmac. The new SID fork has 35mm diameter upper tubes, up from 32mm. This increase may not sound like a lot, but 3mm on a tube makes a huge difference to its resistance to bending under braking load. The fork and shock are both easy to set up and adjust. The rear shock has a tiny 2.5mm rebound set screw, which is slightly hard to locate if you're as new to Luxe's layout as I was. 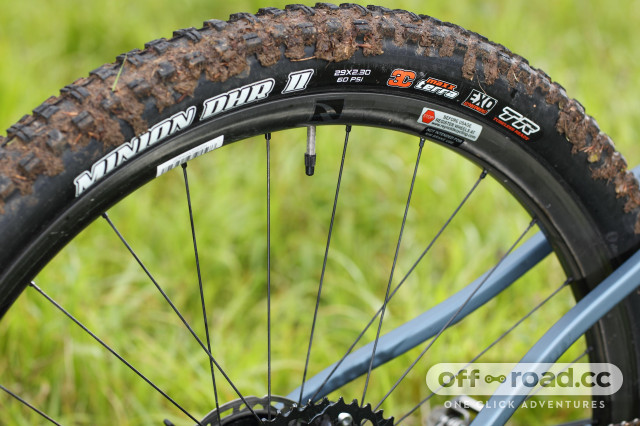 Reynolds BlackLabel TR 309/289XC wheels are the OEM spec, so you won't need to look for new wheels when you buy this bike. They're light(ish) for a 30mm wide rim on the front and 28mm wide rim on the rear, laced 24f and 28r (tightly) to Reynolds/Ringle SRX spline hubs, using Sapim Sprint spokes, with brass nipples. At 1,665g, they're neither heavy nor light. Still, they are durable and reliable, pleasingly quick to get to speed and change direction. Carbon wheels add a specific ride feel that suits the vibrations and demands of off-roading, and these on the Merida were stiff and steered with precision. 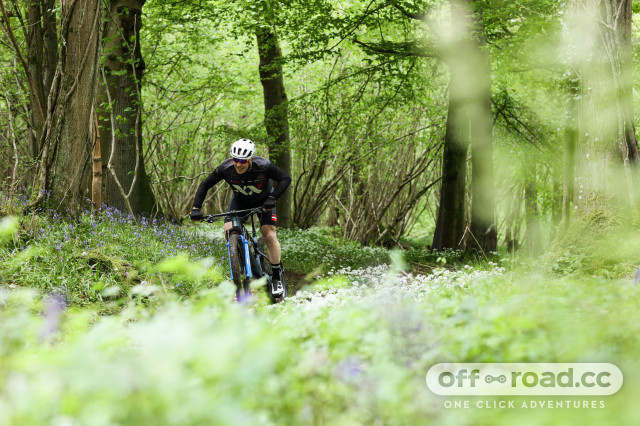 The kinematics of the Ninety-Six 8000 are active in nature, with the rear shock quick to action even over the small stuff. Middle-sized hits like patches of wrist-width roots and fist-sized rocks disappear, partly helped by the chunky 2.35" Minion DHR tyres. Similarly, drop-offs and more brutal square-edged hits are absorbed without much drama. 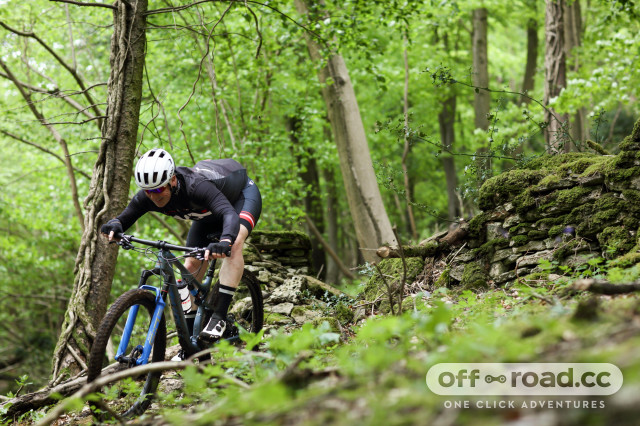 Handicaps are few and far between, but if I were going to point a finger, I'd say the burly tyres hold this bike back. It just doesn't need the slow-moving over-treaded Minion DHR 2s, especially in the chewy rubber compound. Personally, a pair of Ikons would be perfect. However, an Ardent front and Ardent Race rear would add more front-end cornering ability and increase the bike's rolling speed without sacrificing fast turns. I swapped in some Chaoyang Dry tyres to further test the theory, and the bike instantly came alive, feeling fast and ready to rip up summer singletrack trails. 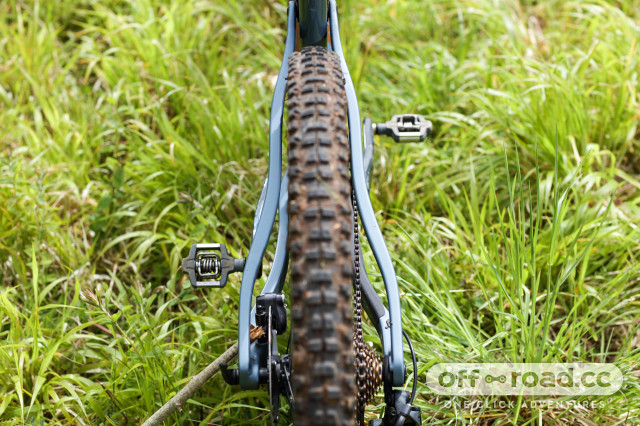 The 8000 climbs with poise in a seated position. The 67-degree head angle allows tight uphill switchbacks to be dispatched quickly and allows the supple, active suspension to deliver its grip benefits. Hit the dropper remote and point it towards a descent, and this bike takes off.

No doubt this bike feels cohesive; it's a proper case of the whole being as good or better than the sum of the parts. I felt quick on my well-used and known local laps, and the Wahoo Element proved it to be so. Not as fast as it could have been, but the core of what I need it to be in terms of raw function and performance - was most definitely there. So from a hard fact point of view, the NinetySix 8000 passes muster for me. 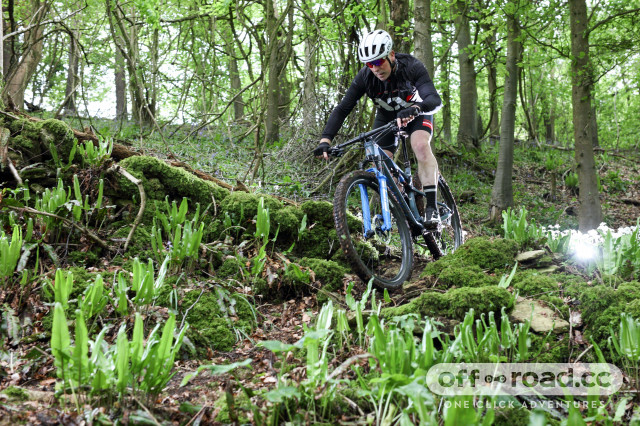 I've never loved a Merida before. But I'm an open-minded 21st Century guy and ready to be challenged. I was warm to the look from the outset. It's a handsome thing, mixing menacing intent with mild-mannered, modern looks. Once I got this bike onto the dirt and figured out how to make the suspension work for me, I was more than happy to let those initial feelings heat up. The more I rode it, the more I could dial in the ride, and I wanted it the more I liked it. I could see this NinetySix 8000 in my life long-term (with some minor spec tweaks), well done Merida. 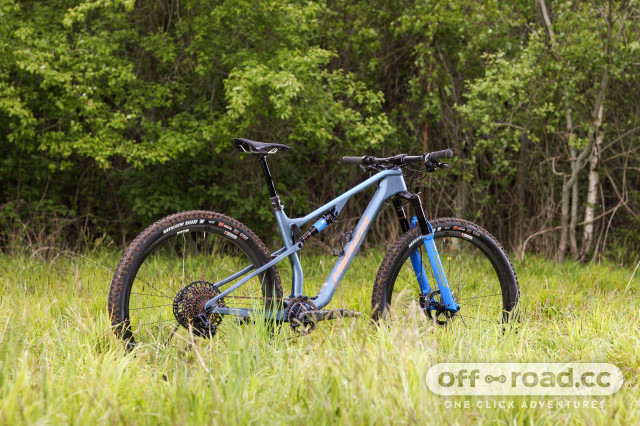 At £6,200, the Ninety-Six 8000 is plumb in the middle of the down-country marketplace, offering a well-rounded package of high-end named parts. Standout bikes to consider alongside the Ninety-Six 8000 would be the Specialized Epic Evo Expert £6,750 and the Canyon Neuron CF Ltd at £5,449 or the Trek Top Fuel 9.8 GX AXS at £6,825 the latter two offering wireless shifting as an incentive to spend a little bit extra.

That said, I think the Merida Ninety-Six 8000 is a great deal with tons of bang for your buck!

Justin has been at the cutting, and often bleeding, edge of mountain biking in the UK for more time than is polite to mention. Technical editor for Britain's leading MTB titles, and racing cross country, downhill and 24 hour solo events, he knows the difference between good and truly special when it comes to mountain bikes.