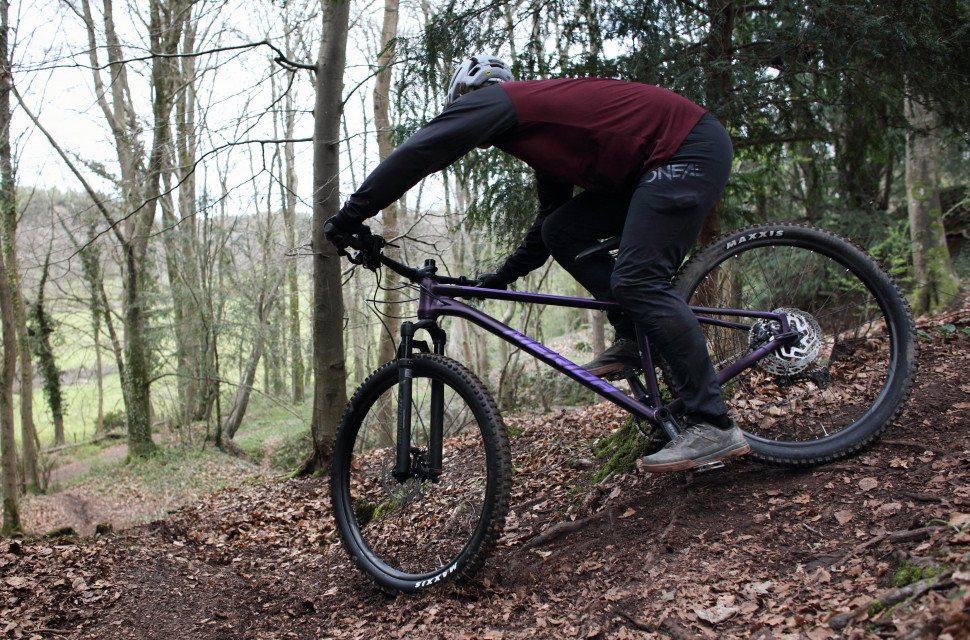 Liam Mercer
|
Apr 30 2021
|
Overall
Quality
Performance
Value
What's good?
What's not?
Buy if...
You're not really tall and you're after a bike capable of doing it all

The Big.Trail 600 from Merida is a trail-ready 29” hardtail that’s impressively capable and nicely specced. It comes with a few neat touches and a ride that’ll please both new and experienced riders alike, but it doesn’t quite offer the bang for buck its competition does.

Handling the bike’s 140mm of suspension is the mighty Marzocchi Bomber Z2. As a budget-friendly fork, it’s a difficult unit to fault. It’s simple with just rebound and compression adjustment, but it’s supple, really nicely damped and plenty stiff enough for a bike like this. 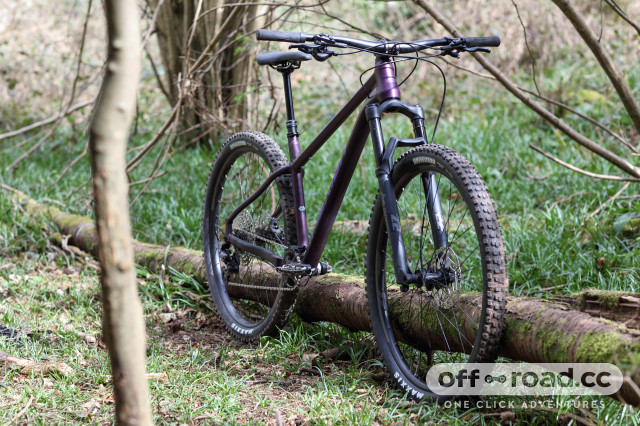 Stopping the bike is a pair of Shimano M4100 brakes and while they do the job, at this money it would be great to see something from the Deore level. The M4100s provide a very respectable level of power, but they’re missing the nice, short levers and Servo Wave tech you get on the spendier brakes. 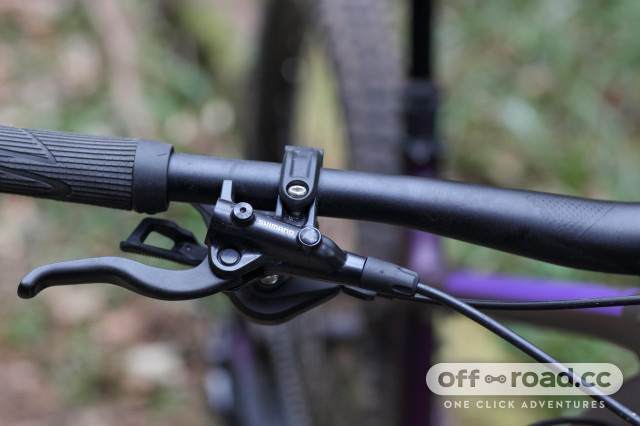 The drivetrain is also Shimano in the form of Deore M6100 with 12-speed shifting, matched to a RaceFace crankset.

As for the hoops on this hardtail, we get a pair of Merida’s own Expert TR rims, laced to Shimano hubs and wrapped in 2.4" Maxxis Dissectors with EXO casings and Dual compound rubber. 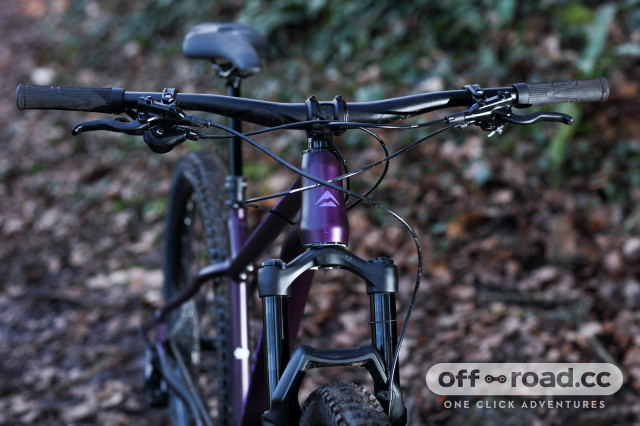 The bike’s finished with a fairly modern cockpit made up of a 780mm bar with a 35mm clamp diameter, and lock-on grips. That's a nice touch, but unfortunately they aren't the nicest grips around. They're definitely grippy but quite hard.

It’d be rude to forget the Big.Trail’s plethora of bosses. It can take two bottle cages in the front triangle, and there’s an extra mount on the top tube that's ideal for kit stashes. 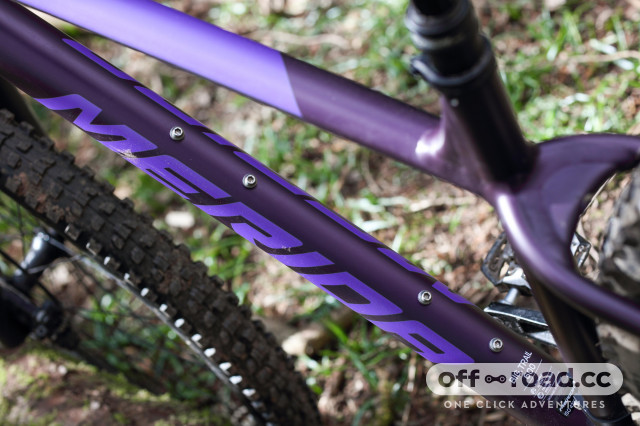 Look closely and you also find hidden rack, fender, and kickstand mounts for a dash of commuter versatility, and the bottom bracket is the threaded type – a plus for us British slop-lovers.

All hoses are internally routed for a tidy finish, and the Big.Trail 600 even comes with some super handy and neatly-hidden tools. Beneath the saddle lives a multitool, plus a clever rear axle lever with 6mm and 4mm Allen keys built in. 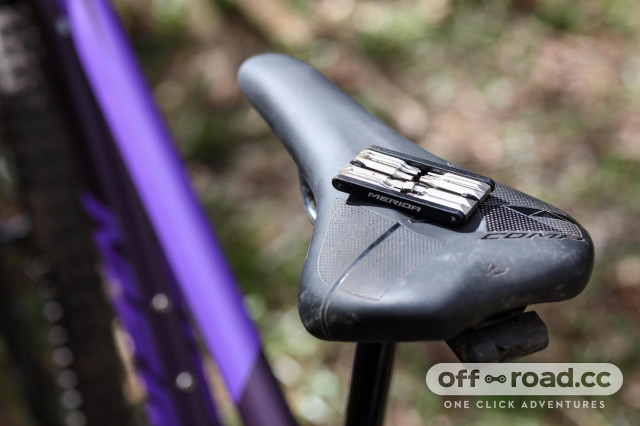 This lever means those two really useful Allen key sizes are easy to reach when fiddling with wheels and axles in the car park. It's the black thing on the log here... 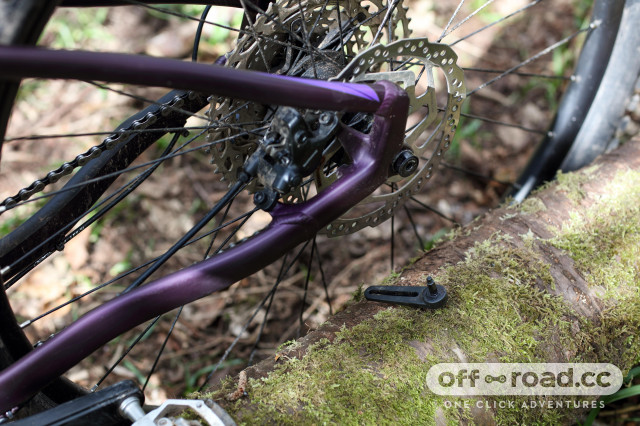 Of course, these tools are awesome for those who are totally new to mountain biking, sorting them out with some must-have gear,

The neat tricks don't stop there, as there's already a chain guide fitted too – a sly wink to how keen this bike is to get rowdy. 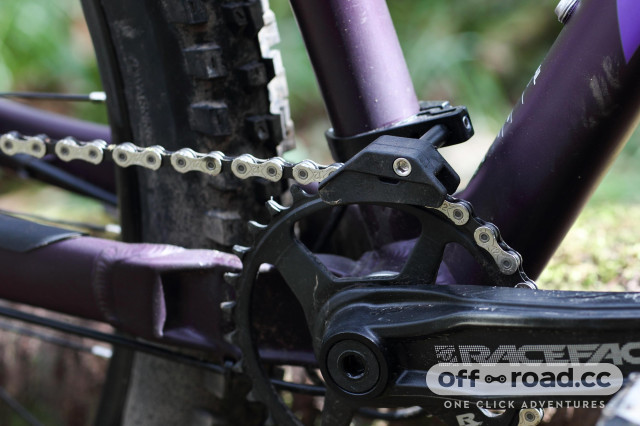 Before we get any further I would should mention that I usually fall between a medium and large frame, and go large more often than not for that extra reach. However, this test bike is an extra large.

Usually, I would avoid extra large frames like the plague, dismissing them as way too big for my 78cm inseam. But to my surprise, I fit on the Big.Trail perfectly, thanks to its lovely short 450mm seat tube. I’ve even been able to take advantage of the full 150mm of seat post travel.

That low seat tube unlocks the lengthy 475mm reach for shorter riders. As a fan of a longer bike, that’s great for me as the large has 'only' 455mm reach (although that's pretty good anyway).

What this means is that sizing up is very viable if you want the stability of a longer bike. However, if you're a tall rider looking for a long bike, there's no XXL frame available yet but I have word from Merida that it's on the horizon for 2022.

The Big.Trail’s shape makes for an impressively confident ride over a huge variety of trails. With its 75.5° seat tube angle, the Big.Trail offers a really pleasant pedaling position both for steep climbs and mellow trundles. It places you at an efficient spot over the pedals that doesn't feel too 'on top of the bike,' but you're rearward enough to confidently pedal through techy sections. 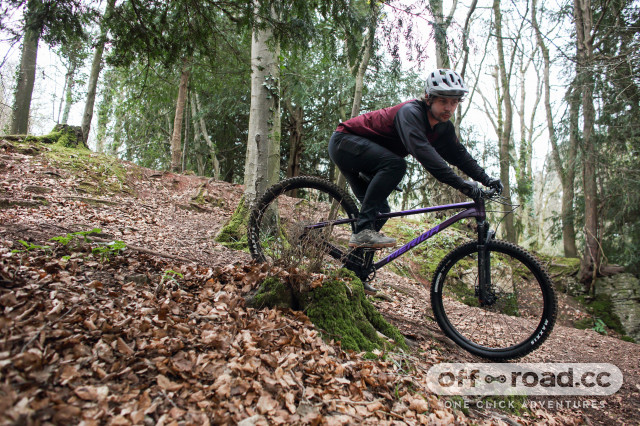 Over mellow, flowy trails those big wheels get rolling, making efficient use of each pedal stroke. The low bottom bracket's 66.5mm drop and the short 435mm chainstays result in a ride that's lively through tight successive corners and heaps of fun on more chilled trails.

Even though I've been aboard an XL frame for this test, nothing feels too big. The standover is low at 728mm, leaving me plenty of room to lean the bike and let it move around.

I do find the head tube a little tall 120mm, but that's a byproduct of sizing up and nothing that slamming the stem pro-roadie style doesn't fix anyway. Taller riders should be fine with it as-is. 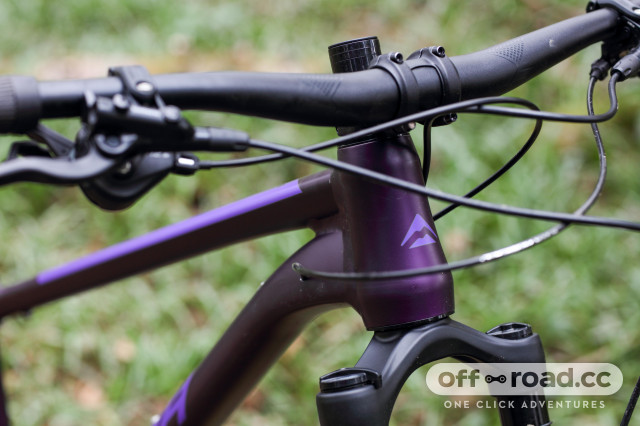 If I were to really niggle, I would say the 50mm stem is a little too long as well, but that's a cheap and easy fix.

Once the Big.Trail is pointed downhill, the 475mm reach and 65.5° head angle make for a bike that can tackle an awful lot.

Having that much bike out front is, for the most part, what makes this bike such a solid all-rounder. It makes the Big.Trail stable at speed and impressively confident when the trail drops away. That short seat tube only helps here, offering loads of room to shift weight towards the back of the bike. 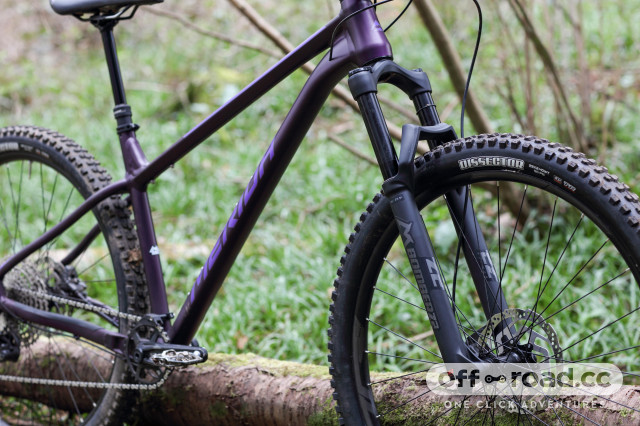 This is where the bike's Marzocchi Bomber Z2 starts to shine. It's supple, soaking up an awful lot of small bumps, and composed enough to stop you pinging offline. Its 140mm of squish is also reasonably well supported, staying nicely propped up when the trail steepens. That leaves you with a bit of extra travel to get you out of trouble when you really need it.

That fork, combined with the Big.Trails extra large geo and the 29" hoops, do a lot to tame proper chunky trails. The bike noticeably retains momentum through the rough stuff without rattling your arms to pieces. It's only your ankles you need to worry about. 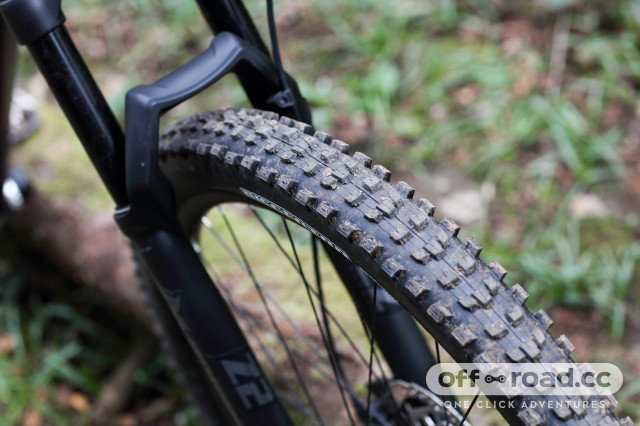 My time with the Big.Trail was spent on a blend of soggy natural trails, not-quite-so soggy hardpack, and some lovely dry stuff. For the soggy parts the Maxxis Dissector at the front doesn't quite do the job; weighting the front just leads to drift, which is far from ideal (although it makes for an excellent rear tyre).

Eventually I swapped to a Maxxis Minion DHF on the front, which seems a far better fit for the bike's intentions – at least for UK winter in the woods. Over groomed and mostly dry trails the Dissector is more than enough, so a tyre swap may just be dependant on the season for some. 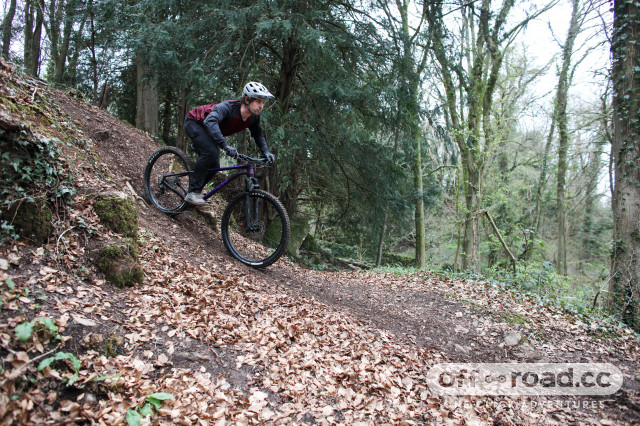 The Big.Trail has some pretty stiff competition from Ragley and the Big Al 1.0 at £1,400. That bike gets slightly more progressive geometry with a 5mm longer reach and a 0.5° slacker head tube, but it also has a slacker (74°) seat tube angle.

Just like the Big.Trail 600, the Big Al gets a Marzocchi Bomber Z2 with 140mm of squish but moves to WTB rims on Nukeproof hubs, a Brand-X dropper and Shimano Deore M6100 brakes. However, its drivetrain loses a cog and it doesn’t get those neat tools. 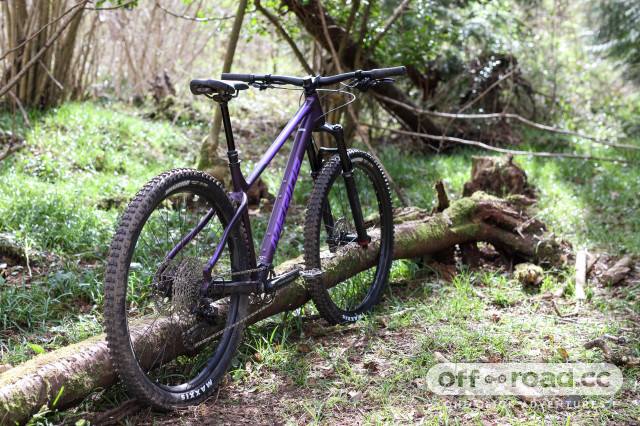 This Merida is also up against the Vitus Sentier 29 VR, which infamously carries a mighty bang for your buck – it gets much of the same kit as the Ragley, but at £1,200. However, its geometry is much more conservative and it comes with a shorter, 130mm fork. 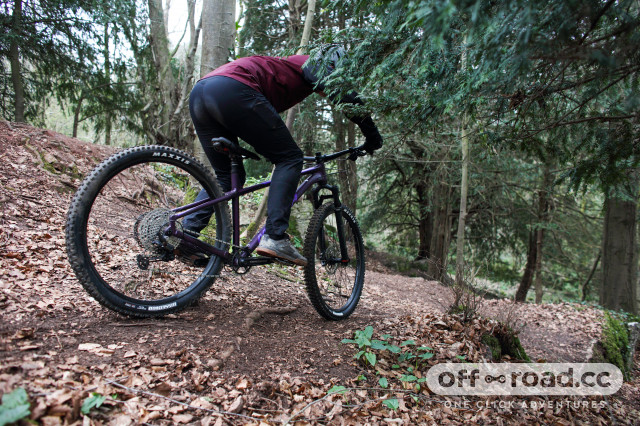 If you’re looking to size up for a longer reach, however, both these bikes have much longer seat tubes – the XL Ragley's is 500mm and the Vitus' is 520mm – and are likely a no-go for shorter riders.

The Big.Trail 600 is a bike that appeals to a large audience. It’s a very viable first bike, yet shaped nicely enough to grow into as your skills progress. Getting tools with it out of the box is also a big plus if you’re starting out. 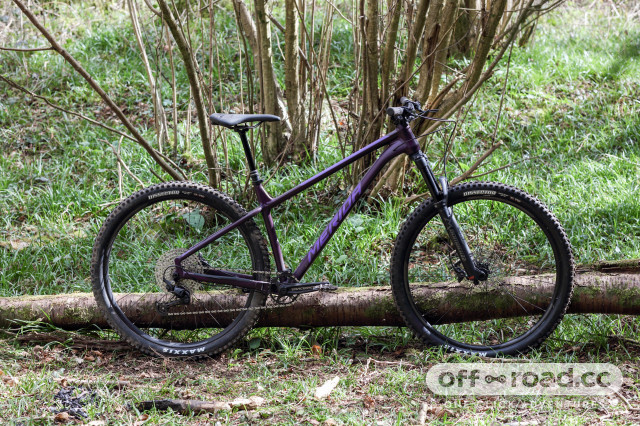 For experienced riders, meanwhile, its accommodation of upsizing makes it more than happy to be thrown down challenging trails. It’s also a really solid bed for upgrades, thanks to its well-considered shape and modern build.

Although a smidge pricier than its competition, the Merida Big.Trail 600 is undeniably a versatile and fun machine. It's shaped well enough to suit a huge variety of trails and riding styles, and it's kitted well enough to deal with most of the abuse you can chuck at it. Only really tall riders looking for a long hardtail won't find something to love here.

2021 DMT KM4 shoes review £170.00
Comfortable and airy with knit construction that stands them apart from others
Feature

The RockShox fork range, explained
Including new ZEB and Rockshox 35 fork, plus different dampers and springs in detail
Review

Endura MT500 D3O Glove review £43.00
A sorted glove that offers a little more protection, if you can forgive some warmth