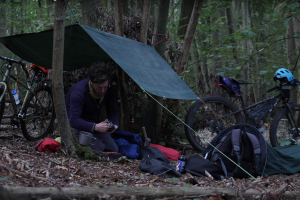 The Adventure Cycle Festival is the ideal meeting ground anyone that likes their bike rides to come with baggage. It's all about celebrating long, self-supported rides, whether you go on the road or off it.

Our resident bikepacking fanatic Pat headed up to the Lake District to take part and he managed to grab some shots of the many and varied setups that people had brought - and probably pedalled - to the show. there's a wonderful variety, with everything from hardcore hardtails, modified mountain bikes, classic tourers and bikepacking specific rigs. Check them out below! 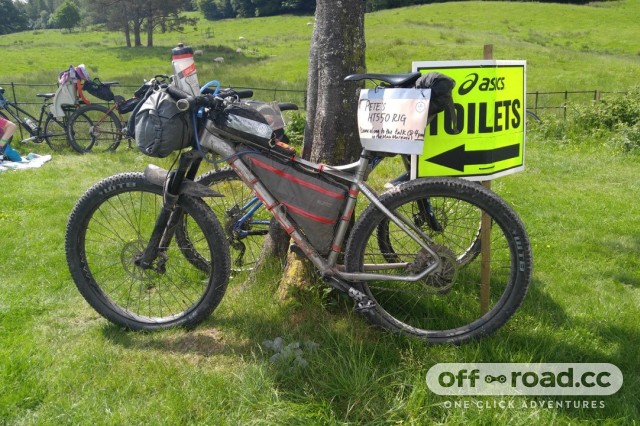 This is Pete McNeill's personal Sonder Transmitter, as used in the rather huge Highland 550 race 'individual time trial'. Pete also runs Adventure Pedlars, a guiding outfit that specialises in getting people started in the world of bikepacking, from weekend breaks to more involved expeditions. He's also got a hookup with gear manufacturer Alpkit, which explains why he's running all their storage gear, while Sonder is their house bike brand.

The Transmitter is made more as a hardcore trail hardtail than a dedicated bikepacking rig, but a slack head angle, 130mm travel fork and modern cockpit with a short stem and wide (normal riser) bar probably help when you want to tackle technical terrain, fully laden or not. 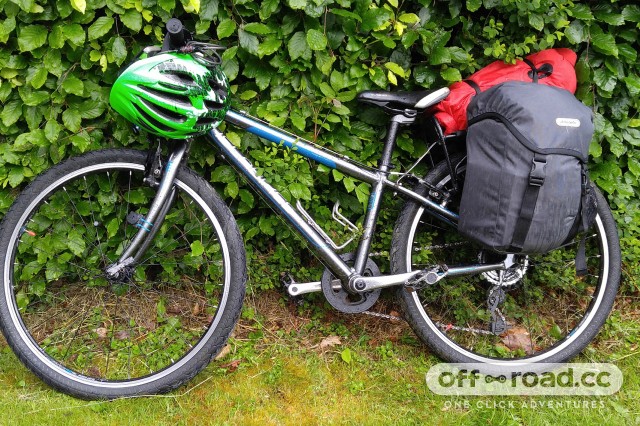 You're never too young to start adventuring on your bike, as this pannier-equipped 24" wheel Islabikes Beinn shows. For a start, your knee cartilage is all lovely and fresh rather than tired, withered and worn so humping all that extra weight won't be as much of an issue. On the downside, the traditional bivvy pick-me-up of a hipflask full of single malt is out of bounds and Ribena probably won't cut it when you're trying to fall asleep in a soggy sleeping bag in the woods. 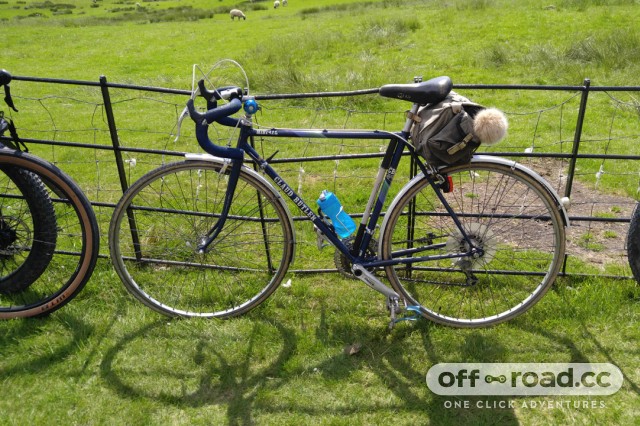 Remember when bikepacking didn't exist at all? Yes, this ride harkens back to the days when it was just called bicycle touring and hardy, weather-beaten individuals used the same bike to do everything from tarmac to rough fire roads to carrying the bloody thing up a mountainside. If only we had a category of bicycle today that could do all that - hang on a minute... 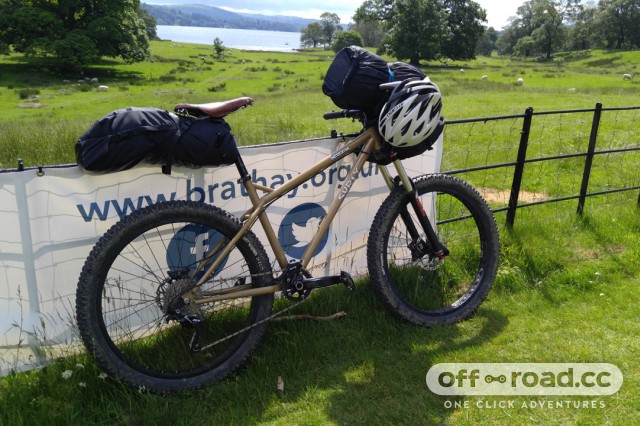 It's another odd choice for a bikepacking rig as the Instigator is a tough trail hardtail that prioritises durability over weight saving. It's also one of the very few bikes on the market that uses the 26 Plus wheelsize, with a whopping 3" tyre on a 50mm internal width rim. On the plus side (geddit?!?) that does mean you get plenty of tyre float on softer terrain, so maybe this isn't such an odd choice if you're there to enjoy the journey rather than worry about getting to the destination.

A Stooge and a Marin 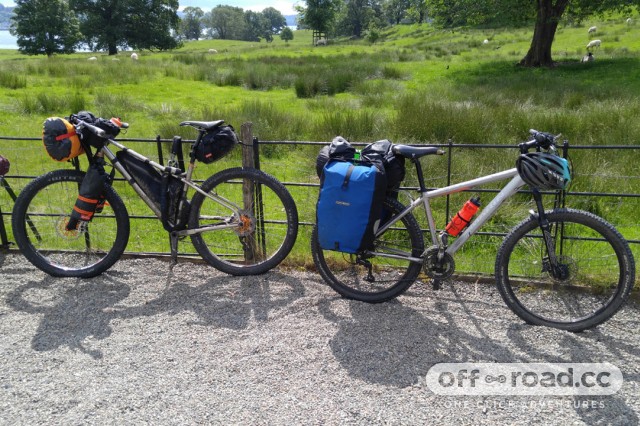 We really like this shot, simply because it shows that if you want to go bikepacking, you can go about it any way you like. On the left, we have a titanium Stooge, set up with a load of bikepacking specific kit such as Alpkit frame bags, Salsa Anything Cages on the fork and what looks like a Jones Loop H-bar. It's a pretty serious setup. On the right, that's a standard Marin mountain bike with a pannier rack and some Ortlieb panniers. It's just an everyday bike with the minimum of expensive extras. Okay, the fancy setup is probably a little bit more versatile and less intrusive when you're riding, but they'll both allow you to get out there and explore and you'll probably end up having equal amounts of fun.

Probably is, obviously the owner (of the CB) is 'living off the land/lamb

Sure way of reducing the load one is carrying..

What's sticking out of the seat pack on the Claude Butler? Looks like a bit of dead sheep.

What's sticking out of the seat pack on the Claude Butler? Looks like a bit of dead sheep.