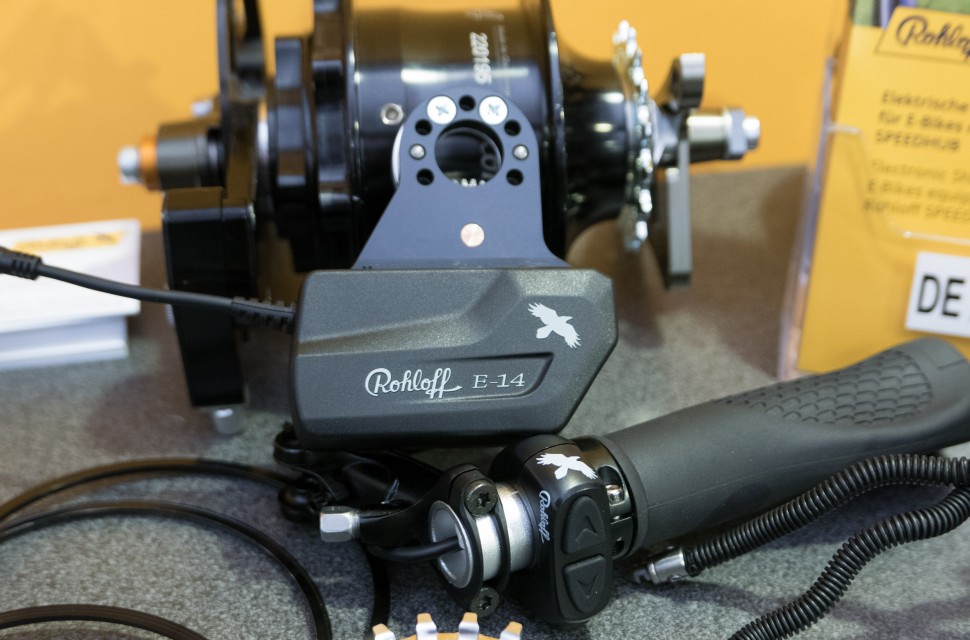 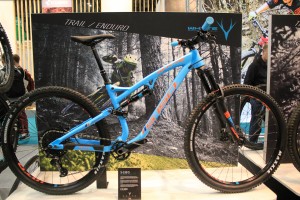 The Core Bike show brings together some of the UK's biggest brands and distributors together to display all the latest and greatest 2018 kit. We wandered the maze-like rooms to hunt out some of the most interesting bits and pieces for your delectation... 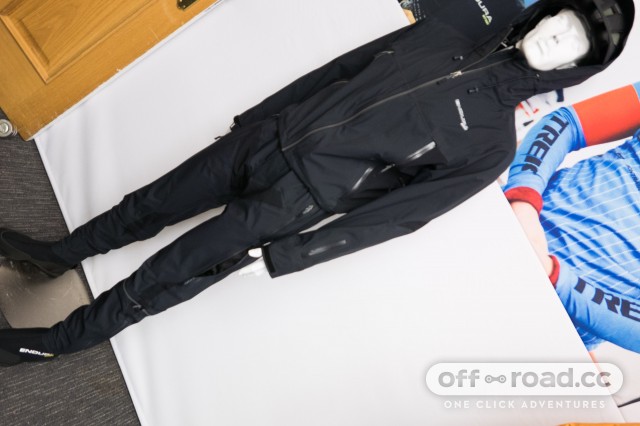 More accurately called the MT500 Waterproof suit, this top-to-toe outfit looks like it'd be ideal for soggy British winter riding. Made from their breathable ExoShell60 three-layer waterproof fabric, you can think of it as a set of waterproof trousers and a jacket, linked at the back. That means you get no gaps for water and filth to get in, but you can still unzip the front to control airflow and get out easily. There's loads of vents and the lower legs zip off.

At a penny under £400, it's a bit of an investment, but if it delivers a dry bum all the way through winter, we reckon that seems decent value. Sadly, it's only going to be available for next winter, not this one. 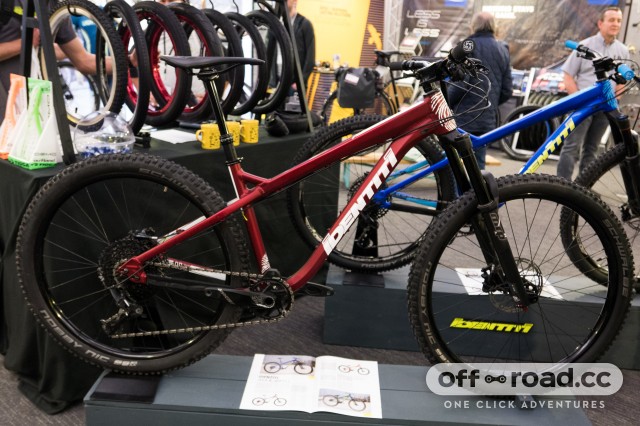 The lairy hardtail is a particularly British obsession and the freshly reinvigorated Identiti brand has followed up the Mettle full-suspension machine with this, the AKA. Running a 140mm fork, it's got decidedly new-school geometry, with a 64.5º head angle, clearance for up to 2.6" rubber on 27.5" rims and adjustable dropouts that allow you to run the bike singlespeed. There's also a 26" wheeled 4x racer version called the Dr Jekyll.

Frames start at £499, but two complete bike builds will be available later on in the year. We're keen to have a thrash on it as soon as we can. 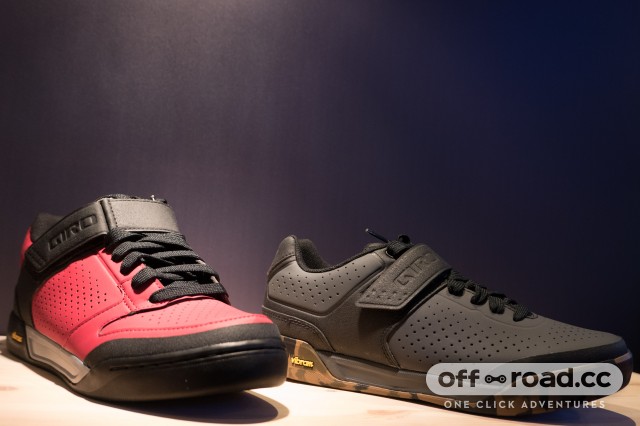 We do love a bit of flat pedal action in the office and Giro has now revised their flat shoe range to offer more grip and comfort. The soles are now made from softer Vibram MegaGrip rubber to counter criticisms that the old style lacked grip and the uppers on both shoes are now made from more water resistant microfibre material. The Riddance is the higher end shoe with the choice of a high top version for £120 or a low version for £110, while the Chamber 2 costs £130. The entry flat pedal shoe in the range is the redesigned Jacket 2 at £90. We're looking forward to getting our hands on some... 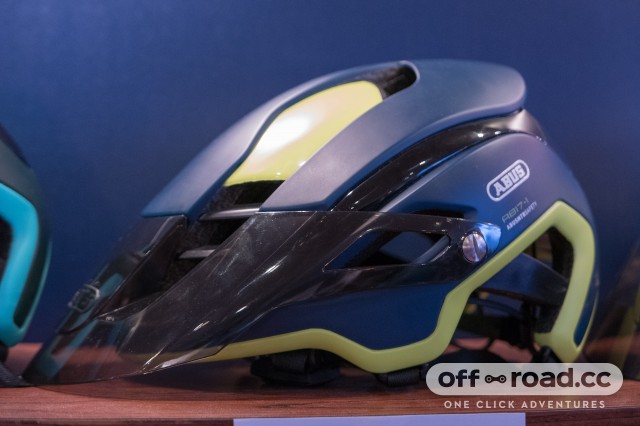 ABUS locks are well known for keeping your bike secure from thieves, but they've also kept heads secure with a range of helmets, though mostly aimed at the road and commuter market. This is their go at a proper, high-end mountain bike helmet and there's loads of interesting stuff going on.

The first thing is that the peak is made from a slightly tinted see-through material, which is supposed to keep the sun out of your eyes without impeding your forwards view as much as a normal peak would. The vents are also interesting, being relatively small in size and few in number, but instead designed to concentrate cooling airflow over your head. There are a number of different models available, with this top-level MIPS equipped model costing £150 but prices starting well below that. 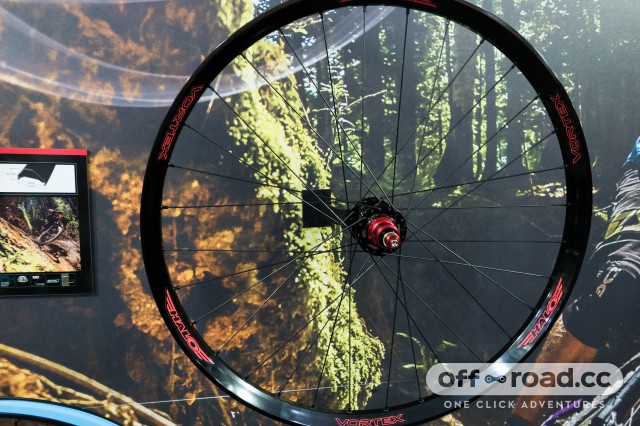 We've already had news of this wheelset, but at a smidgen over £400, this wheelset looks like a solid choice for enduro racers or trail riders who are hard on their kit but not their wallets. At over 2100g for a pair in 27.5", they aren't for anyone that likes to count grams, but the guys at Halo say that their sponsored rider James Shirley managed a full Enduro World Series on a single, well-battered pair when he'd previously been going through a set of another brand's every race. 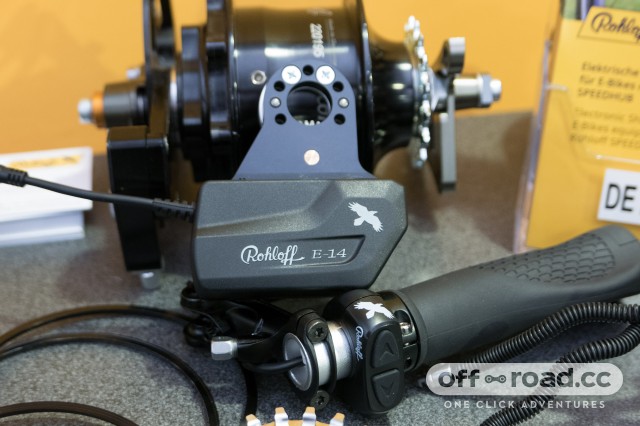 The Rohloff hub gear is a firm favourite with the mega-distance touring bike set. However, as we found when we reviewed the Rohloff-equipped Shand Bahookie Dropbar, their current shifter options aren't ideal with a drop bar or for anyone that doesn't want a twist-shifter.

This new electric shifting module will be very welcome news indeed as it removes the need for a pair of cables, instead requiring just a single wire and button shifter. Exciting eh? Well, hold your horses. It's only available to work with Bosch e-bikes, where some clever electronics momentarily cut assistance as you shift to reduce the load and ensure a smooth change. There's no word if we'll ever see a system designed to work with meat-powered bikes either... 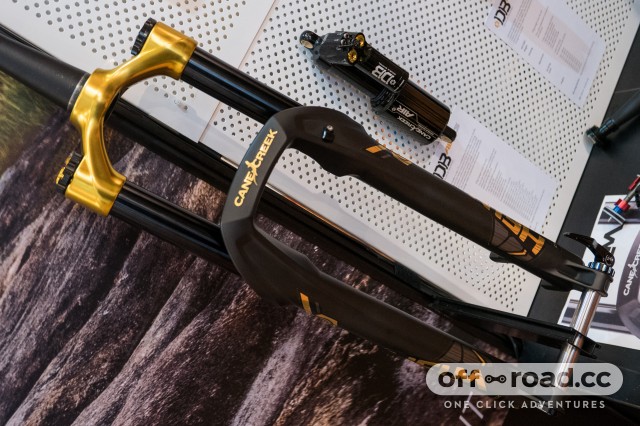 Okay, we spotted this at Eurobike, but this trail-slash-enduro fork from suspension masters Cane Creek looks really interesting, mostly because it shuns an air spring in favour of a good old-fashioned coil.

While that means adjusting for rider weight isn't as easy - you'll need to select the right weight coil from the four on offer - it does promise much more sensitive performance as it does away with the tight and sticky seals needed to keep the air inside an air spring.

You get high and low speed adjustable compression damping as well as rebound from a sealed cartridge damper, while it's possible to adjust the travel on offer from160mm down to 130mm with internal spacers. 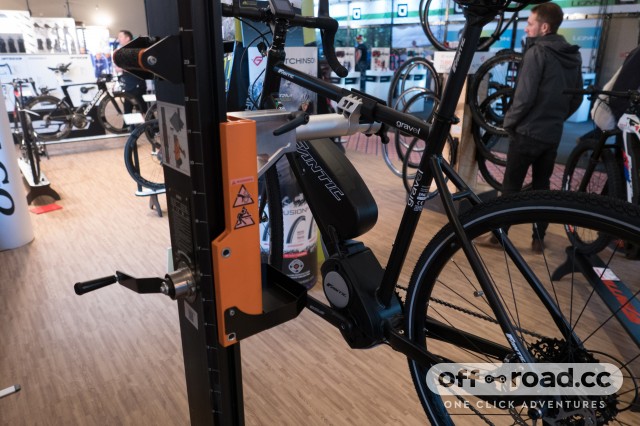 At a cool grand, this workstand is probably a bit beyond the reach of the home mechanic, but with a neat hand-crank system to raise and lower the bike, it is rather trick. It's designed to lift e-bikes up to the correct height for servicing without physically disfiguring mechanics who have to do it day in, day out. Still, anyone that's struggled to lift a chunky bike with one hand while trying to lock it into position with the other will appreciate this one. 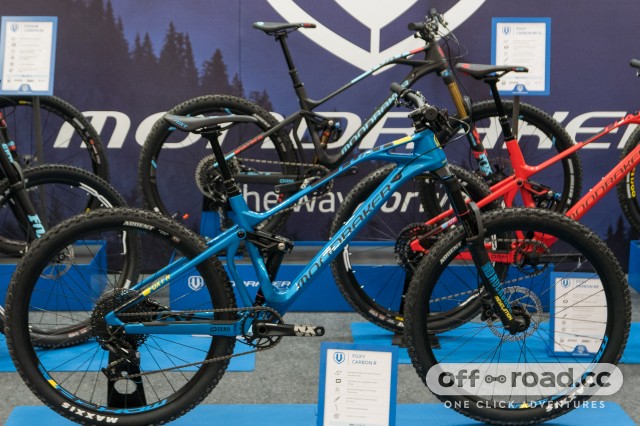 This bike isn't new, but it's the first time we've clapped eyes on it in the flesh and it's a lovely bit of kit. It uses Mondraker's extra-long Forward Geometry system that we got on with so well when we reviewed the Factor RR, but the Foxy is the longer travel trail bike in the range, with 150mm of bounce at either end. It also gets a full carbon fibre frame that's got all the mod cons such as trunnion mount shock, Boost spacing and adjustable geometry. This is the entry to the range, but at £3,799 you'll need deep pockets to sample it.