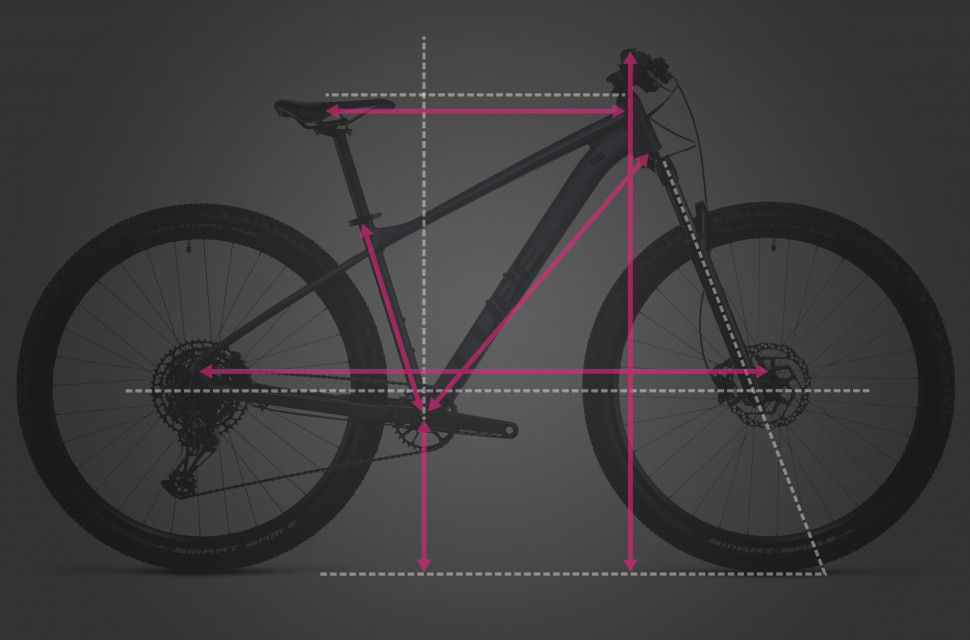 Geometry is the foundation of every bike and it is key in dictating how it handles, how it fits and what a bike may, or may not be good at doing. With the shape of a bike being so important, it's more than handy to know what all of those numbers on a geometry chart actually mean. Here, we'll go over the most important measurements and what they mean for your bike.

Geometry charts grace every bike brand’s website and at first, all of those numbers can be confusing but they’re a treasure trove of important information that mustn't be ignored when shopping for a bike. While liable to a bit of change from chart to the final product, they can give you a good idea of how a bike would ride, and fit, which if you aren't able to test a bike before buying, is incredibly important. Ignoring these measurements can land you with a bike that doesn't fit properly, or suit the style of riding you prefer.

All of the below when found on a geometry chart will be measured either in millimetres or centimetres though in very rare cases, you may find some written in inches. 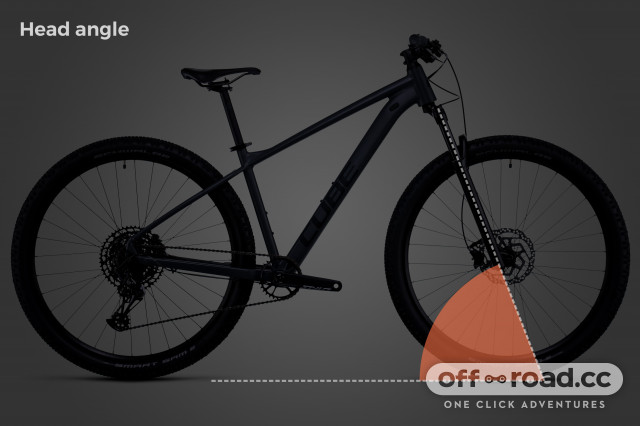 Starting at the front of the bike, this one is pretty self-explanatory but even minor adjustments to this measurement can result in big changes to a bike’s ride characteristic. It’s the angle of your frame’s head tube, the tube that your fork's steerer sits through and the one where you’ll clamp your stem above.

Steeper head tubes (67° and upwards) are often found on cross country, gravel, and more conservative trail bikes whereas this angle gets slacker as the bike's intentions edge more towards descending prowess. Steep head tube angles often result in a direct and quick steering characteristic. They put the front wheel closer to the rider which can offer a more supportive feel when climbing and it can be easier to shift weight around the bike when climbing.

These kinds of head tube angles can make the rider feel very 'over the front' of the bike when descending and nervous when speeds pick up, and trails get steep.

Slacker head tube angles help descending as they'll push the front wheel further from the centre of the bike, offering more support as a trail's gradient gets steeper. This also results in a more stable ride both in the corners and in straight lines. They also get the suspension fork working a little better as the angle of attack becomes more acute.

There are downsides with slacker head angles, however. At slow speeds, steering can feel 'floppy' and the front wheel can be harder to keep tracking in a straight line while climbing. As the front wheel is further in front of the rider, it can also be difficult to weight properly when pedalling uphill. 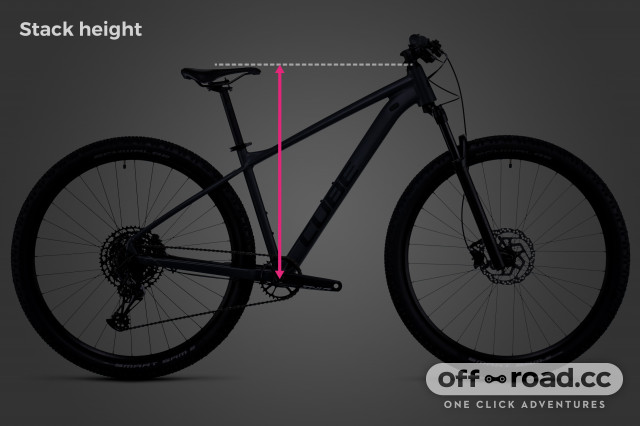 Stack height is the measurement taken vertically from the bottom bracket to the top of the head tube. This figure is an indication of how tall a bike's front end is and it's dictated both by the length of the headtube itself, and the length of the fork a bike is equipped with. Often, bikes with longer travel forks have a higher stack height, simply because there's more fork underneath the head tube. Vice versa for shorter travel forks too.

As with head tube angle, the stack height affects the bike's ride feel when descending and ascending as it changes how weight is distributed over the bike. A lower stack will make the bikes front end easier to weight when climbing and in the corners, while a taller stack height will shift a rider's weight into a more rearward position, which is desirable when tackling steep sections of trail.

This can be adjusted through how you stack your stem spacers but of course, this can only change so much. 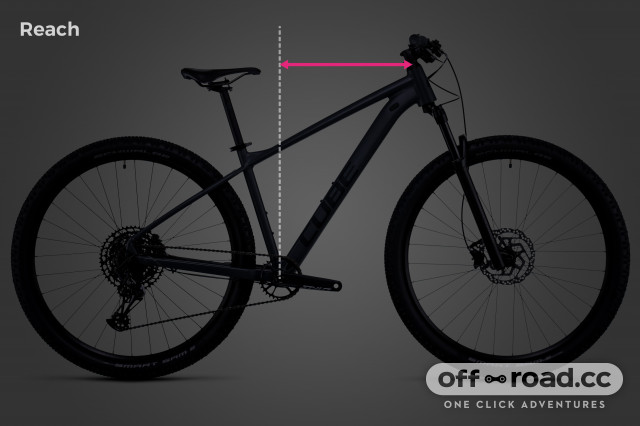 The reach measurement has become a massively important figure in recent years because it doesn't only affect how the bike handles but it's also key in how the bike fits. It's become so decisive that some brands such as Specialized and Privateer size their bikes by their reach measurements, rather than their seat tube heights or as 'small', 'medium' and 'large' as seen traditionally.

While paramount to bike fit, riders can pick from reach measurements to suit their riding styles with shorter reaches being more agile, and often found on cross country and gravel bikes (albiet with much longer stems). Bikes with an emphasis on gravity riding tend to get longer reaches, becoming more stable all-round and more supportive in steeper sections of trail. 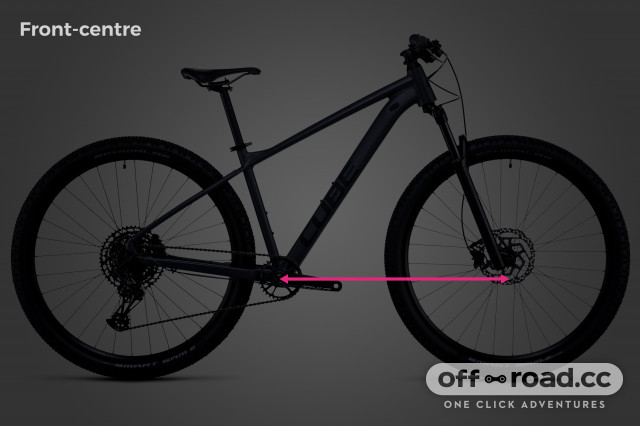 The front centre measurement is taken from the centre of the bottom bracket to the centre of the front hub. It's dictated by a number of other measurements, namely the head angle and reach. A longer front centre keeps a rider's weight further behind the front wheel, resulting in a supportive ride when tackling steep sections and it'll help keep the rider from feeling thrown forwards as the front wheel hits large bumps.

Two bikes can have the very same front centre but handle very differently thanks to differences in the head angle, and reach. 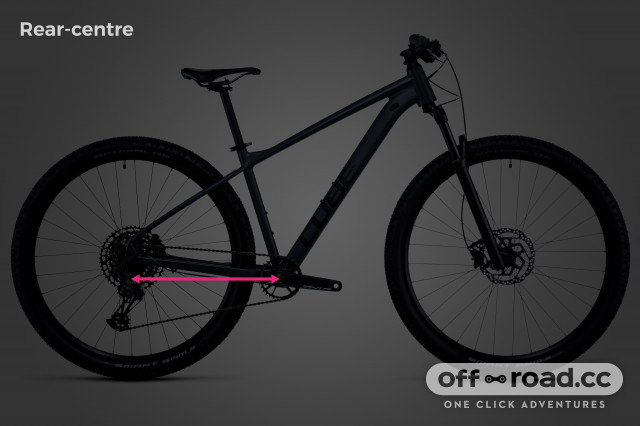 The rear centre (or chainstay length) refers to the distance between the centre of the bottom bracket and the rear axle. The length of the rear centre has a noticeable influence on weight distribution but a shorter measurement can often make a bike more agile when cornering.

Short chainstays aren't without their downfalls however as they make it tougher to achieve even weight distribution which becomes clear in flat corners where riders will find the need to weight the front end more to maintain steady traction. Bikes with short rear centres aren't as stable at high speeds either and if big volume tyres are your thing, you'll have to be careful of how big a tyre you fit before fouling the frame. 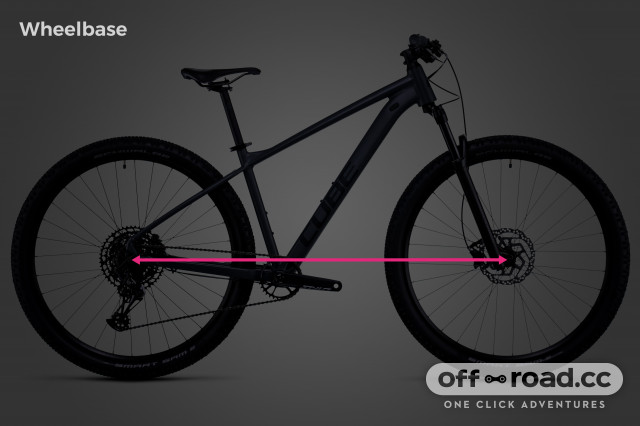 The wheelbase is very much the sum of a range of other measurements, as it takes dictation from the reach, front centre, rear centre and head tube angle. A look at this can offer an idea of how agile it might be in the corners if it's shorter, or how stable it'll be in a straight line on straight sections.

At the very least, it's a handy measurement to take note of if you want to know whether or not you'll be able to fit the bike in the back of your car. 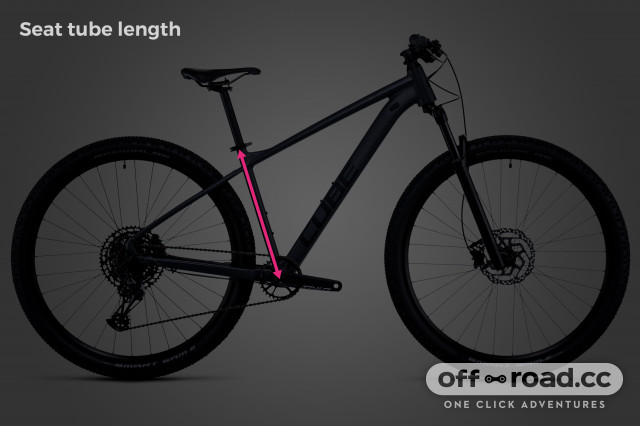 Seat tube length is what mountain bike sizing has typically been based around and to a point, rightfully so as it dictates the minimum height that the seat post and saddle height can be set. It's the distance between the bottom bracket and the opening where the seat post sits.

Checking the seat tube length will give you a solid idea of whether or not you'll be able to sit over the bike. 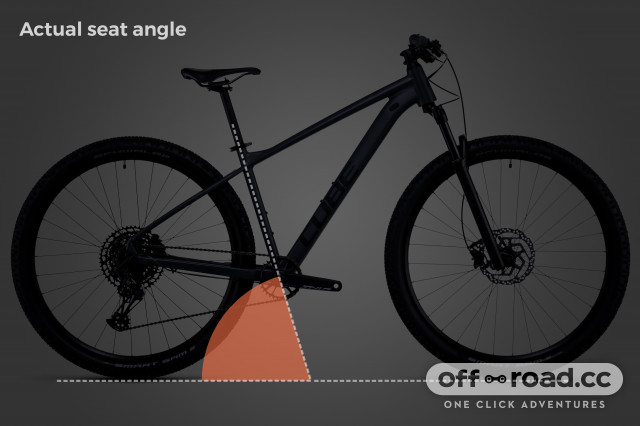 A bike's actual seat tube angle denotes the angle of the seat tube... Surprise, surprise. This has an effect on weight distribution, where your body sits over the bike in relation to the bottom bracket and how roomy the cockpit will feel. Too slack a seat tube angle and it'll be harder to weight the front of the bike and it can sometimes feel as if you're pedalling with your feet far in front of your body, where it's not very efficient. Riders will benefit from a roomy cockpit, however.

Steepen the seat tube angle and it'll be easier to weight the front end on steep climbs and you'll be able to pedal far more efficiently. The rider will feel more centred over the bike and benefit from a straighter back, reducing fatigue in the lower back. Too steep and riders might feel as if their weight is shifted forwards, resulting in nervous handling when riding over flat techy trails. 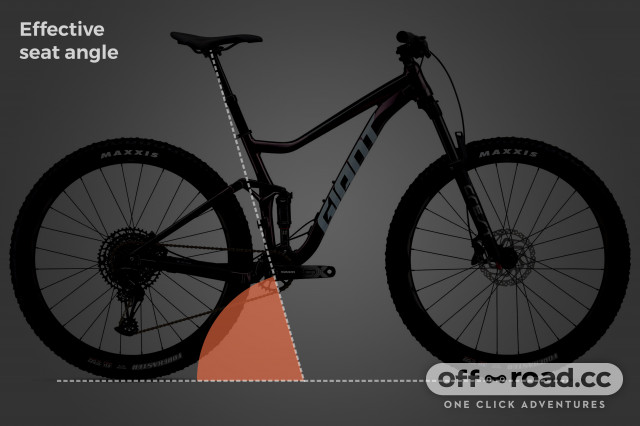 Because many mountain bikes are being designed around suspension platforms, and with the pursuit of short chainstays (or rear centres) being prominent in bike design, brands often create seat tubes with curves or kinks to make space for such mod-cons. These differently shaped seat tubes end up slacker but are cleverly tailored to achieve the effect of a steeper angle.

On full suspension bikes, the effective seat tube angle can offer a much more accurate impression of how the bike feels to ride. However, this is only used when the bike's seat tube isn't already dead straight. 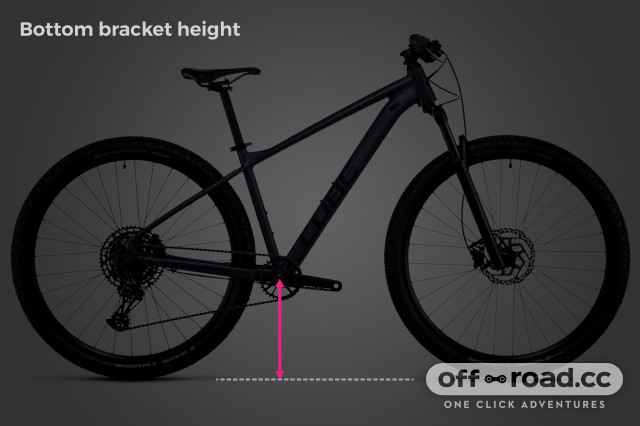 The bottom bracket height is the measurement taken from the ground to the centre of your bottom bracket while any suspension is completely uncompressed. The higher the BB is off of the ground, the less likely the rider is to strike their pedals. Lower bottom brackets often offer a more 'planted' feel.

This measurement can change depending on the size of the tyre and wheel you've fitted, and when the length of your fork changes. 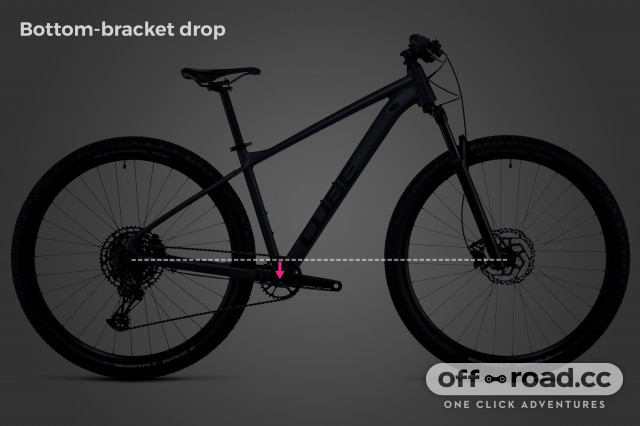 The bottom bracket drop differs from bottom bracket height as it denotes how low the BB sits underneath the wheel hubs. This can affect how a rider might feel 'in' or 'on' the bike, with the former being lower and the latter, higher. A lower bottom bracket drop can help the rider feel more confident when cornering thanks to a boost in stability as the centre of gravity is lowered.

'Long' and 'short' are words that are often used to describe measurements that are... Well... Longer or shorter. So these are the reach, and wheelbase to name a couple. A long reach, for example, could be a 475mm measurement on a medium frame size, a short one also on a medium frame would be 420mm by today's standards.

These words refer to the angles, so those are the head and seat tubes. A higher number suggests a steeper angle and a lower number points toward a slacker angle. So a 71° could be considered steep and a 63° is certainly slack.

A progressive geometry is the polar opposite of a conservative one. Progressively shaped bikes are pushing the boundaries of what we're used to seeing on modern mountain bikes. Here, we'll find 64° head angles, 475mm reaches on medium frames and steeper seat tube angles. 'Progressive' is a term that can be switched out for 'aggressive'.