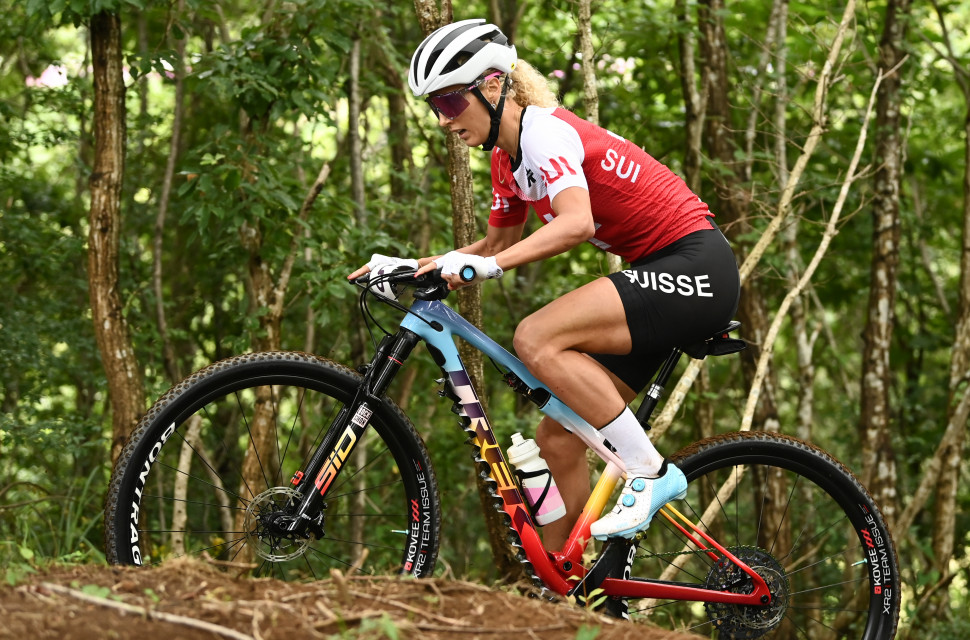 While Switzerland is certainly the most dominant nation within cross-country mountain biking, I doubt anyone would have predicted the Swiss 1-2-3 win we saw in the women's Olympic XC event. Jolanda Neff delivered a runaway performance to take the Gold medal, with compatriots Sina Frei taking Silver and Linda Indergand the Bronze. 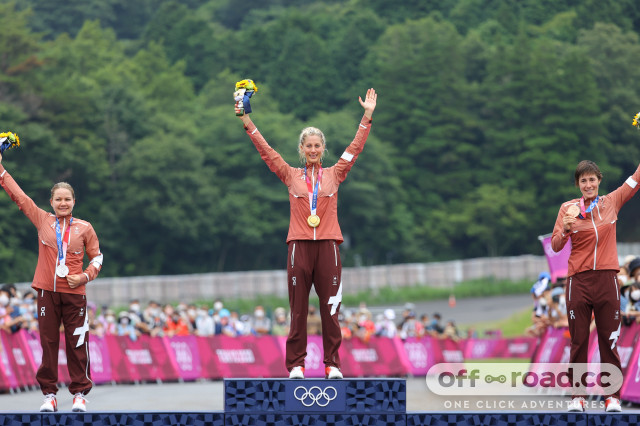 However, the event was not without controversy, with pre-race rain and wind resulting in last-minute course alterations and some interesting adjustments to bikes and kit to suit the conditions.

Course changes included reintroducing the training ramp for the rock drop-off where Mathieu Van der Poel crashed in the men's race the previous day and removing A-lines on other rock garden sections. In mountain biking, multiple line options are often used on technical features. The A-line is typically the more technical and shorter option with the B-line (and sometimes C-line) less technical but longer, adding time.

Of course, these changes will have disappointed some riders. However, all three Swiss riders are very capable of technical riding. The British rider, Evie Richards, rode a superb race to finish 7th overall, with an incredible start putting herself right in the mix. The young Brit clearly demonstrated that she has trained to improve her technical skills, clearing the rock drop with ease, a section in the 2019 test event that she chose to avoid by using the B-line. The 24-year-old now has an impressive performance to build upon for Paris 2024 in just 3 years. 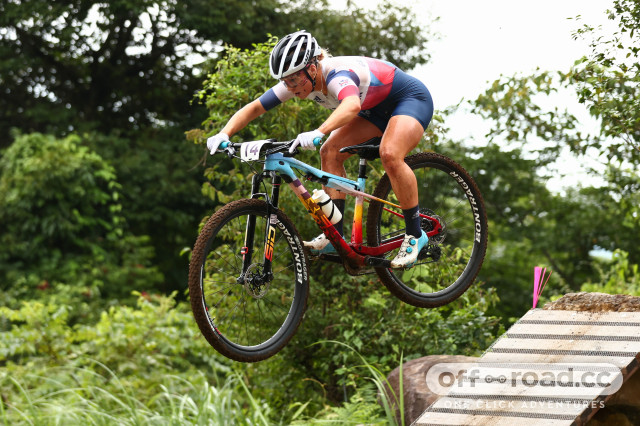 During the first lap of the race, there was some controversy between Jolanda Neff and Pauline Ferrand-Prevot, which saw Neff nearly follow a similar over-the-bar incident that befell Van der Poel. Neff has been critical of Ferrand-Prevot's approach to the rock drop, suggesting she had pulled the brakes hard just before, causing the Swiss rider to deviate her line choice while going over the drop itself.

"She was in front of me, and we were going at a good decent speed and then she pulled her brakes super hard, and I couldn't do anything. I couldn't brake, and I ended up jumping with no speed at all. I was super lucky that I didn't crash. It was such a stupid move of hers because it's really dangerous for the people behind.

I don't know if she knew I was right there behind, but after that, I just thought, 'I have to get away from her.' It's scary because you never know what she's going to do.

It's not the first time she does something like that, I'm just glad I wasn't near her anymore, I was glad I was riding on my own and safe." - Jolanda Neff

Shortly after the incident, Ferrand-Prevot slipped on a greasy rock ascent which saw her crash into the race tape, providing Neff with the opportunity to push ahead, riding alone to take a commanding victory.

We saw some interesting extra touches caused by the pre-race rain, especially from the Swiss riders, with tyre choice also proving crucial. All three Swiss riders (but no other riders that we could see) had an intriguing wavy pattern on the down tube. This creation was first seen on riders bikes at the World Cup in Les Gets a few weeks ago and is, in fact, just gaffa tape applied in a way that creates the wave pattern.

The idea is to create a surface that mud is less likely to stick to, and as I am sure many riders will know themselves, certain mud can feel like the stickiest stuff in existence, adding substantial weight to bikes in a World where weight and performance are absolutely vital. 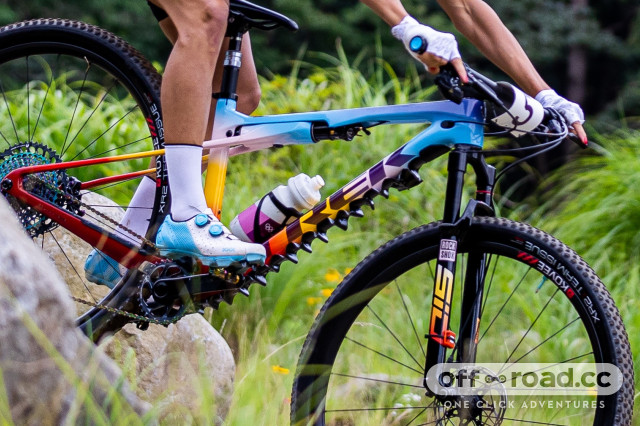 Both Jolanda Neff and Evie Richards ride for Trek Factory Racing. As we suggested in the pre-race feature, we chose to use the Trek Supercalibre bike.

Both bikes feature an exotic selection of components with SRAM XX1 Eagle AXS wireless groupset and RockShox SID SL Ultimate fork. The cockpit setup is reasonably neat, with the SRAM Twistloc used as a simultaneous lockout for both fork and shock. Both riders make use of the RockShox Reverb AXS dropper seatpost with wireless activation from the shifter on the left of the handlebar with the right shifter used for rear shifting. Both riders use SRAM Level Ultimate brakes, featuring carbon levers and titanium bolts throughout. The wheels for both are Bontragraer Kovee XXX carbon wheels with a claimed sub-1,300 grams total weight. 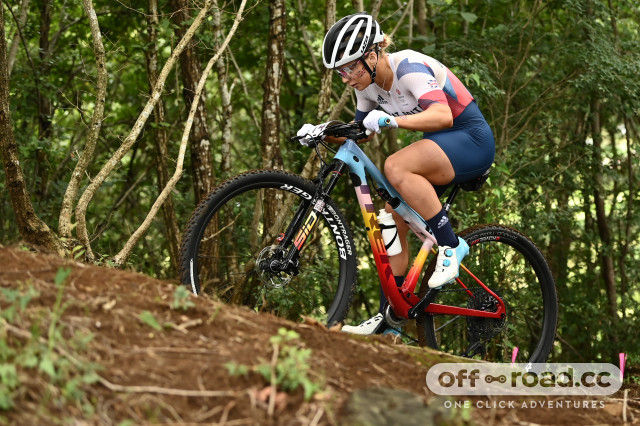 The bike specification varies with the tyres, with Jolanda Neff perhaps taking a risk, choosing the Bontrager XR2 Team Issue tyres, usually reserved for drier conditions. Neff must have had confidence in the weather improving but also in her own technical ability. Evie Richards used a pair of Bontrager XR Mud Team Issue tyres, which was perhaps a sensible choice given the early conditions. However, with the warmth and rain stopping, it appeared that the ground had improved substantially as the race progressed. 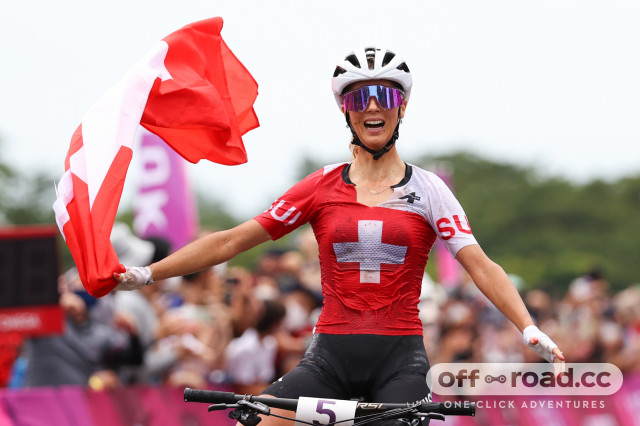 The heat may have been the reason behind the Swiss rider's clothing choice. Their ASSOS jerseys had no zip or means of cooling, perhaps designed for aerodynamics on the road above all else. All three riders had chosen to cut the jersey themselves with the hope of improving some cooling.

That is quite standard. Tom Pidcock wore a skin suit and the majority of athletes do the same.

The lack of zip is odd however and not something that was likely welcomed in the heat.

One might suggest that the Swiss cycle team only bought roadie flavoured kit?

One might suggest that the Swiss cycle team only bought roadie flavoured kit?