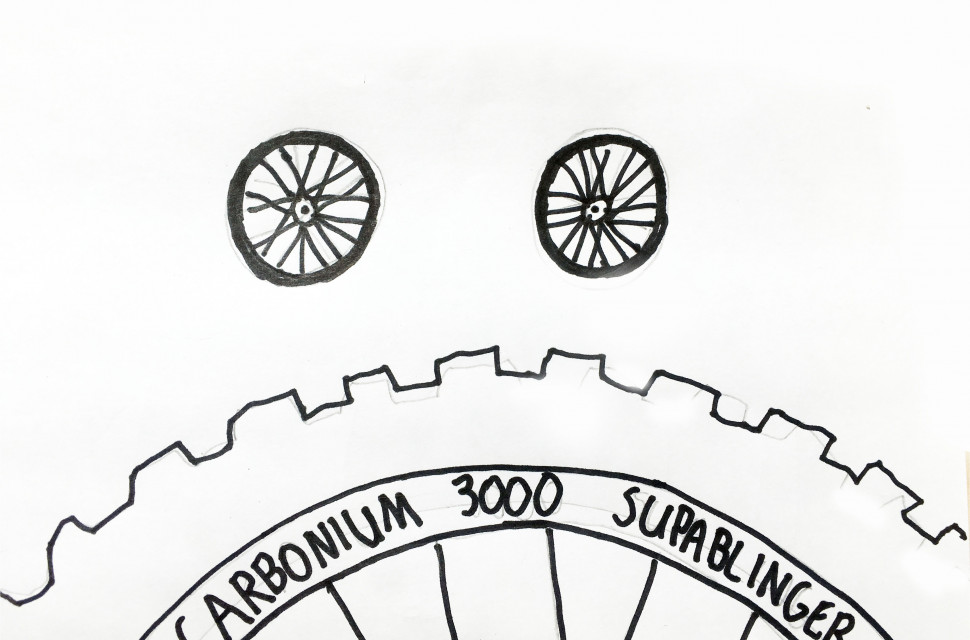 Carbon mountain rims are without doubt one of the pinnacles of bicycle engineering achievement - they're strong, light and stiff, usually with a great big price tag to match. Our Jon just really can't see the point in them.

Before I get stuck into this, I should say a few things. First up, there's very little science in this, just some personal observations and broad thoughts. I'm not a heavy rider - neither in weight nor riding style. I don't find most rims too bendy and I'm not a cross country racer obsessed with weight. Your personal experience may vary based on those variables.

I also have no problem with carbon fibre as a material for making bikes out of. In fact, the opposite. It allows engineers to tune the feel of a bike frame and create shapes that'd be simply impossible with other materials and it's allowed bikes to be much lighter overall. I think all the stuff about it being an accident waiting to happen or fragile is overblown; I've spent my own money on a full carbon fibre full sus bike that I ride as hard as I can without ever worrying about it, though admittedly with a lot of frame protection tape on it.

My issue is that I just don't think it's very well suited for making rims out of, certainly not if you have to buy your own. Rims live in a harsh and horrible environment all of their own, with just over a couple of inches of rubber and air cushion protecting them from the worse terrain going - and often failing to do that, which is when the bad things happen.

It just doesn't make sense to put a brittle and very expensive material near that, even if it is lighter and stiffer - and I'm not sure that either of those things are wholehearted positives either.

Yes, I know there are plenty of downhill race teams using carbon fibre rims out there but this is an environment where smashing components to bits on a run by run basis is normal and budgeted for. They don't pay for them, ergo it doesn't matter; whether the rim offers the most performance possible and still holds together for a single run is what does.

This is my primary issue with the entire thing. For the most part, carbon rims are many, many times the cost of a comparable aluminium wheelset, especially in the trail, enduro and downhill world, where the carbon equivalent isn't often that much lighter.

I do not pay for the things I test, but if I'd just launched into a rock garden on a wheelset that costs as much as a very good full suspension bike, I suspect that rim-preservation might win out over giving it the beans, if only at a subconscious level. Do you really want to be riding all the time worried that you might break your fancy rims and be left with a great big bill?

Yes, most premium brands offer crash replacements at cost - still not cheap though - and have test data that proves you can smash their wheels into a rock much harder before bad things happen. I'll still take unbending the bead of some aluminium rims with a spanner and carrying on any day.

Then we move on to the whole stiffness thing. At first, I was pretty taken with it - rims that feel stiff feel precise and they also feel fast. I am willing to bet my little toe (very important for balance, it is) that 'feel' is the operative word there.

Carbon rims are stiffer and that means they go where you point them, but stiffness is not always such a great thing. You need your tyres - and to some extent, your wheels - to be able to move around the stuff they're running into and being super stiff doesn't help here. Try running your tyres at 50psi and see. Flex in the tyre is what gives grip and it's the same with rims, though obviously there are limits of how flexy both should be before grip is replaced by unpredictability.

Stiff carbon rims don't smear around rocks and roots - they tend to get pinged off in a different direction. That probably doesn't happen if you're a super strong racer in superb condition - in fact, that accuracy is probably what you're after - but for most of us, it's not great. It's tiring and unpredictable.

Okay, I am 65kg and don't have any issues with most wheels feeling bendy. If you're a 110kg beefcake and riding on aluminium rims feel like surfing on a bowlful of Super Noodles, fill your boots. Just don't cry when you hit rocks really hard.

I'm also pretty damn sure that the stiffness of most carbon wheels is why people (including myself) often rave about how 'fast' they feel. Moving back to our tyre analogy, there's been plenty of work done in the road world about tyre size and pressure. Despite there being proof that a fatter tyre at a lower pressure is often faster (never mind much more comfortable) in real-world situations, when you feel how zingy a high-pressure tyre feels, it's easy to convince yourself otherwise.

I think the answer to that is - most likely - in the fact that the stiffer setup transmits more vibrations to you. You tend to gauge your speed by what you feel through your hands; if you're feeling more, it must be faster, right? Probably not, it's just more tiring and less comfortable.

Of course, there are now many carbon rims on sale that aim to solve this, by providing varying kinds of tuned flex. I think this is all laudable work and though I've not ridden them - I know, a black mark when you're off ranting about something - I have no reason to doubt that it may work to help this.

My main problem is this; why on earth would you pay so much more money to have something that's designed to work more like something that's a fraction of the price? Why not just have that thing in the first place? Get yourself a comfortable wheel you won't be heartbroken by if it makes a bad noise on a rock and also pocket enough money to buy yourself multiple spares, surely?

Okay, I get it if you're in the pursuit of the very last bit of performance then there's nothing wrong with that. The performance versus the cost math might start to be good sense if you need that edge in order to achieve your goals; that's totally fine.

Again, if you just are lucky enough to be able to spend that sort of money or you just want to have the best possible product then there's nothing wrong with that either. I mean, if you had to be capable of extracting every ounce of performance from a product in order to prove yourself worthy of buying it then I doubt very few supercars would leave the showroom.

My main point is that for most people, myself included, carbon rims sit in the same category as ceramic bearings; yes, they do work as advertised - i.e. marginally - but they simply don't make economic sense for 99.9% of riders. Yes, I do find myself guilty of lusting after them and I'm sure they'll get better and cheaper - but until then, I'm out.