Skip to main content
Log In Register
Calibre Sentry review £2,000.00
Near perfect platform for more aggressive riders and racers at a bargain price 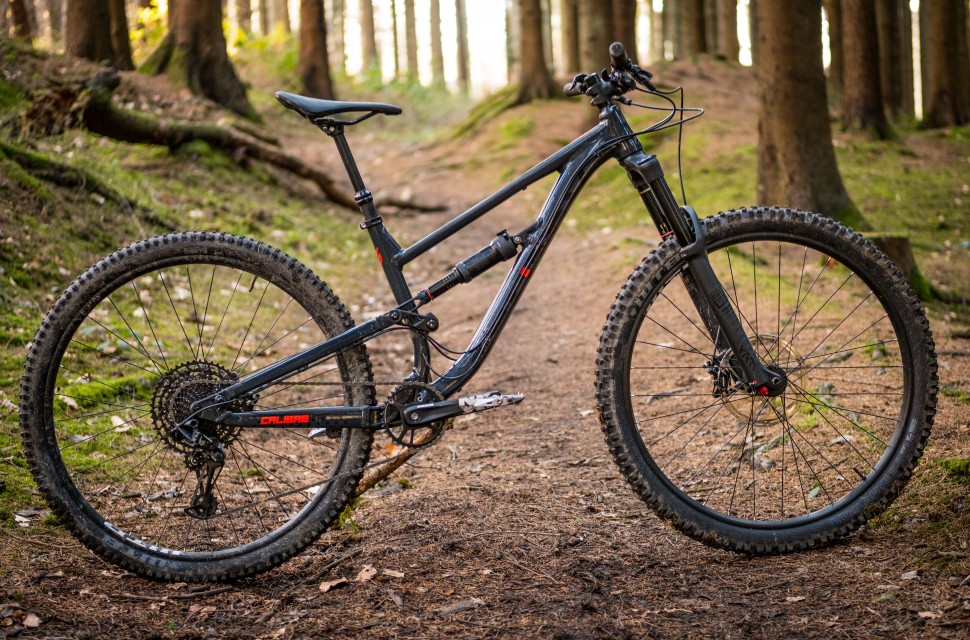 The Calibre Sentry has rewritten the rule book where full suspension enduro bikes are concerned; it's the full package, incorporating progressive geometry, spot on component choices and a price so low that you’ll need to sit down before you read it.

Before I dive straight in with the review, here’s a video rounding up everything you need to know about the new bike from Calibre, plus more details on its brother the Sentry Pro, straight from the mouth of the designer at Calibre, Mike Sanderson.

Starting with that price, this Sentry comes in at £2,000 (with a £5 Go Outdoors card) and that gets you rather a lot of bike. The Sentry is a 150mm travel 29er using a 160mm fork, there's a Rockshox Yari with 42mm offset fork up front and a Rockshox Deluxe R shock dealing with bumps at the rear. The bike gets a SRAM NX Eagle drivetrain with a 32T chainring - yep, 12-speed for two grand. There are also uber powerful Guide RE four-piston brakes specced and WTB STi29 rims on Formula hubs. 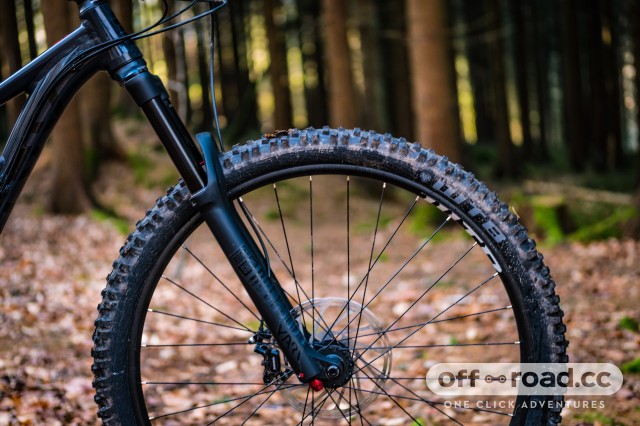 These are all components you’d expect to see on much pricier bikes and nothing there you’d need to upgrade in the first instance. The brakes are worth an extra mention for being the most powerful pair I’ve ever seen on a 2K bike. The crankset, does, however, use a square taper bottom bracket which is a cheaper and heavier way of doing things but can (and probably should) be replaced by a regular external threaded bottom bracket (and new cranks) once this one wears out to save a fair old bit of weight. 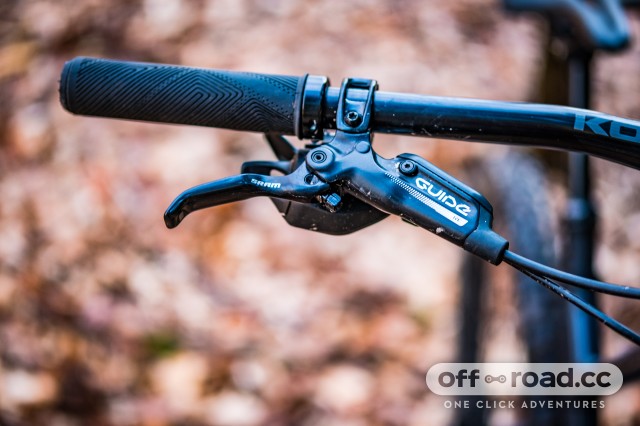 The branded spec list continues with Kore Durox 800mm wide bars and a Kore Mega Stealth 150mm dropper post. In fact, the dropper post was the only piece of equipment to cause us issues in the test period with the post moving very slowly both up and down and being hard to compress fully. Calibre says they have contacted Kore and there has been a faulty batch issue; all Calibre bikes on sale will have fixed posts and shouldn't experience this issue. The dropper post lever isn't the most intuitive to use but you could swap it out for an aftermarket under bar lever. 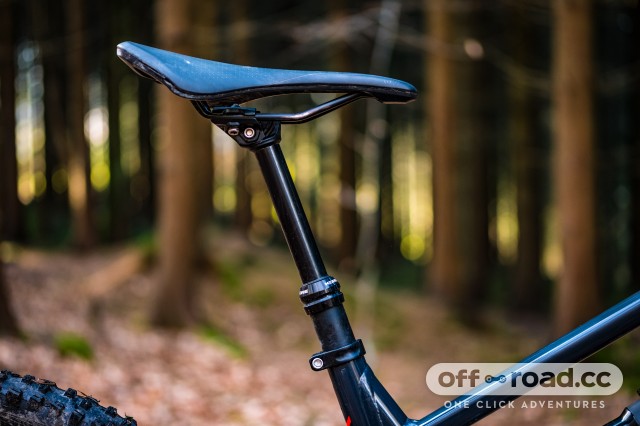 On the ground are WTB tyres, with the brand new 2.6” Vigilante TCS G2 on the front and a 2.4” Trailboss on the rear. The large lugs of former make it pretty good in both wet and dry conditions, the latter spices things up somewhat in the wet but rolls well, so what you take with one hand you give with the other. There are some own brand items, but it's only the 45mm stem and saddle being that are from the Calibre stable. 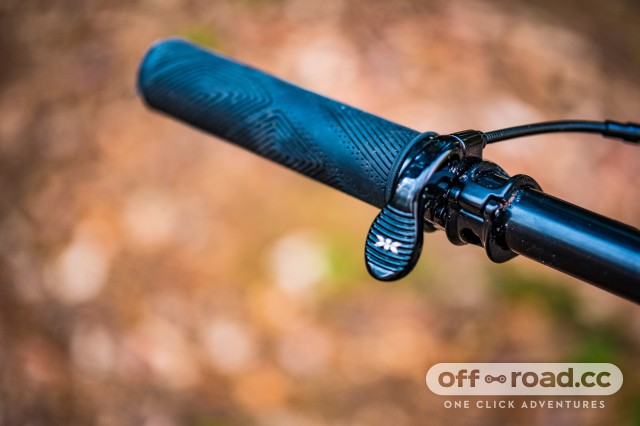 All this gear weighs in at a slightly portly 15.42kg. I'm not that bothered about the weight of a bike as long as it isn't excessive and the sprung weight will help the suspension work better on descents and coupled with a decently steep seat angle it won't hinder you on the climbs. There's also the opportunity to drop a fair bit of weight with some judicious future upgrades - that crankset being a prime example. 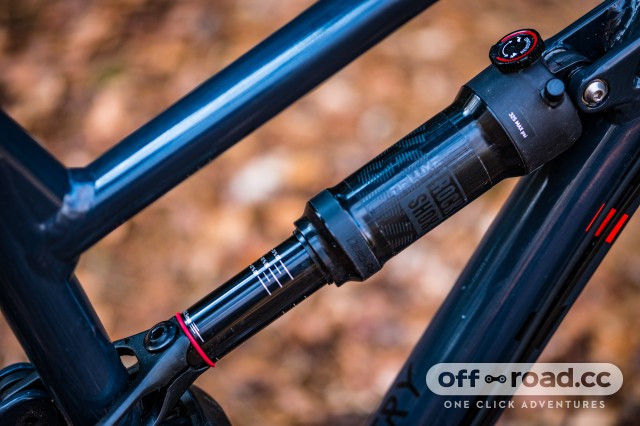 Geometry wise, it is clear the Sentry has been designed by a rider who is switched on to modern geometry trends, with a slack 64° head angle, steep 76° effective seat tube angle and 445mm chainstays. I tested a size small which gets a 445mm reach, a 1,218mm wheelbase and 420mm seat tube length. The steep effective seat tube angle means the seated position is comfortable, the effective top tube on my small is 597mm despite the longer reach. 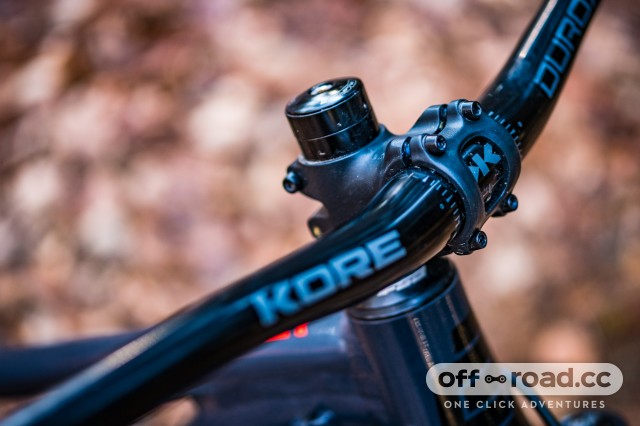 There are four sizes in the range in total with each size adding 20mm in reach and to the seat tube length incrementally, this adds up to a 465mm reach on the medium bike and a lengthy 506mm reach on the XL bike. The frame is well thought out with stealthy graphics, easy to manage cable routing which sits out of harm's way on the outside of the down tube and clevis style pivots joining the seat stays to the linkage, which in theory is a stiffer way of doing things. 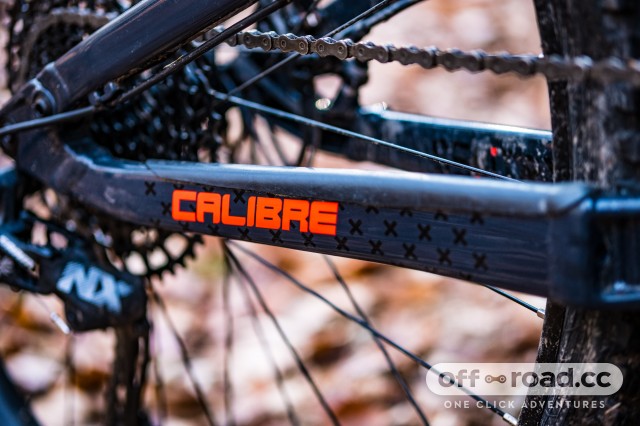 Mike at Calibre says he wanted this bike to be a bike for “Enduro World Series racing out the box but without breaking the bank”, it’s designed to be a bike for going fast and tackling techy trails. But don’t let that put you off though, you don’t have to race this bike, it is also a capable and tough trail machine for riders that enjoy descending tough trails regularly. 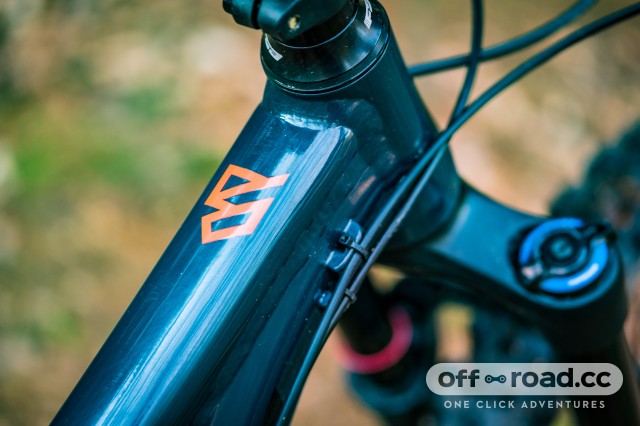 The Sentry, with its 64° head angle and roomy reach figures, is a confidence inspiring place to sit at the trailhead of a track that might be outside your comfort zone. It encourages a feeling of assurance that you can tackle whatever is ahead of you. The big wheels plough through everything in its path and it's pretty stable too, the long back end and low bottom bracket (330mm) sees to that. 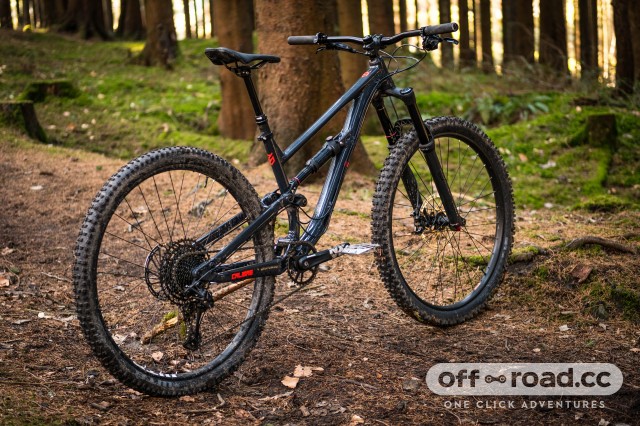 In fact, stable in a straight line is this bike’s game, the low bottom bracket height makes it less accustomed to quick changes of direction and more at home letting the brakes off and hooning downhill. That’s not to say it doesn’t corner, it does and with plenty of grip too, the roomy reach allows the rider to place their weight in the centre of the bike and really push this bike hard, rather than defending the front wheel as you might on shorter bikes. You can push this bike around and weight the front wheel on the quest for as much grip as possible at speed. 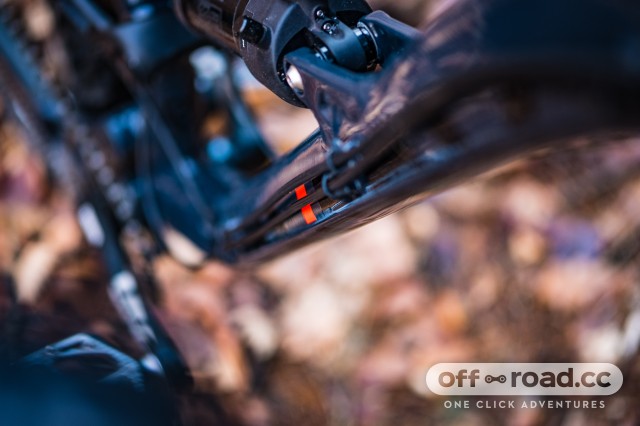 The linkage driven single pivot suspension set up trumps all other bikes at this price point and the Yari fork is simple to set up and reliable too. I did find the fork to ‘spike’ a little on bigger hits which got rather tiring on the hands and wrists, but that isn't anything bike specific, I’ve found that on Yari forks previously too. I had added two volume reducers on this 29er fork and found this was a good balance between small bump compliance and ramp up for bigger hits. 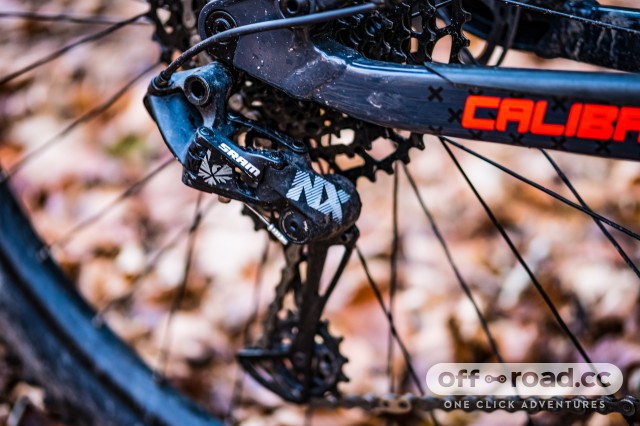 Fewer volume reducers stopped the fork from ‘spiking’ but also gives less midstroke support, making the fork dive through the mid travel. Those who want to can upgrade their Yari and essentially make it a Lyrik by putting in a Charger damper for about £200 and get access to the super plush, supportive feel that provides. 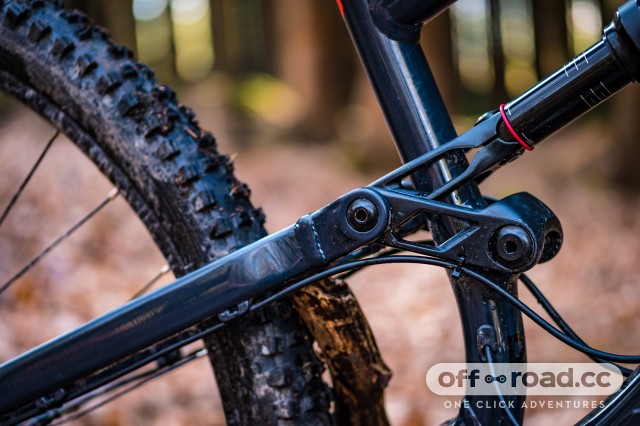 The Deluxe R shock I found was a little overdamped for me and I found the shock slow to extend even with no clicks of rebound damping applied. That said, I am only 57kg, so heavier riders are less likely to find this a problem as a higher air pressure in the shock will consequently cause the shock to rebound more quickly.

To fix the problem for my riding I added three volume reducers to the shock, this meant that the shock gave a more supple feel off the top (small bumps) due to less air pressure (although still a tad slow) and ramped up more at the end of the stroke meaning that high-speed rebound was faster and the shock didn’t get packed down either. Even with this alteration the bike’s suspension feeling a little wooden due to the slow low-speed rebound but it’s my only real criticism of a bike which by all other accounts is an absolute banger of a bargain enduro bike. 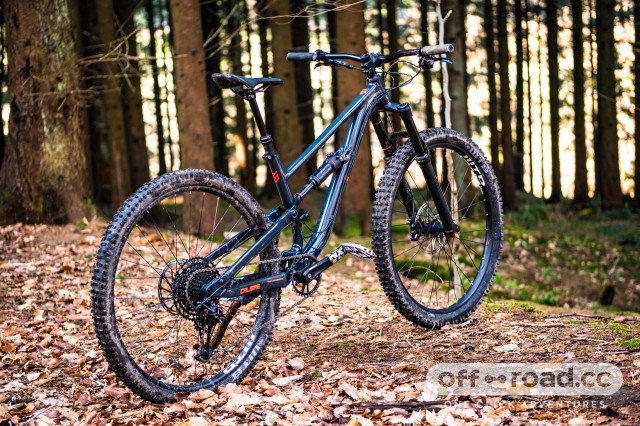 Taking the bike back uphill, whether for another take on that gnarly trail or for the next stage of your enduro is no trouble at all and thanks to a steep effective seat tube angle, it is easy to climb technically too thanks to a well balanced, longer front and rear ends. All kitted up to ride with tools, pedals and water, the bike is well over 16kg and it does make its weight felt but I’d say you’ll only notice it on longer days or when your legs are lacking power. 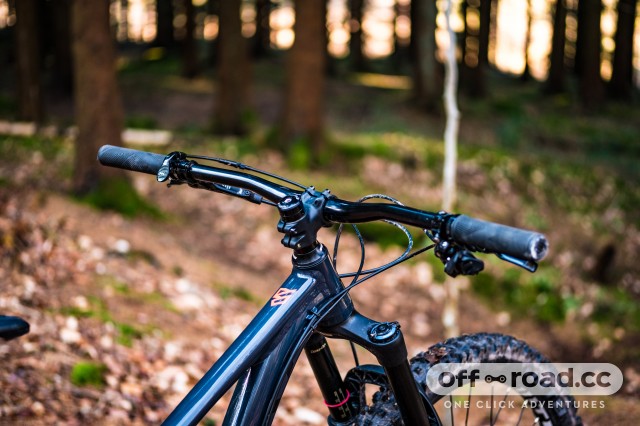 The Calibre Sentry will make riders and bike manufacturers rethink the rulebook where bike design and pricing is concerned. The geometry of this bike makes it a perfect platform for more aggressive riders and racers alike, it’s very well specced for the money and a bike you can jump on and ride straight away and have an absolute blast at the same time. It’s a hard bike to fault, my gripes with the shock are personal and different rider weights and rider style may not feel the same issues.

Looking for your next bike upgrade? Look no further than this bike and remember you can also buy the Sentry Pro, which at a mindblowing £2,800 gets you a Lyrik fork, a coil shock and SRAM GX Eagle. The bikes are due in stock at the end of April rather than March as we mentioned in the video, you can register your interest in one here. Finally, Calibre will be at our Bike Live Demo Day at Cannock Chase on the 6th April, where this bike will be available in an array of sizes to test ride. Get your tickets here. 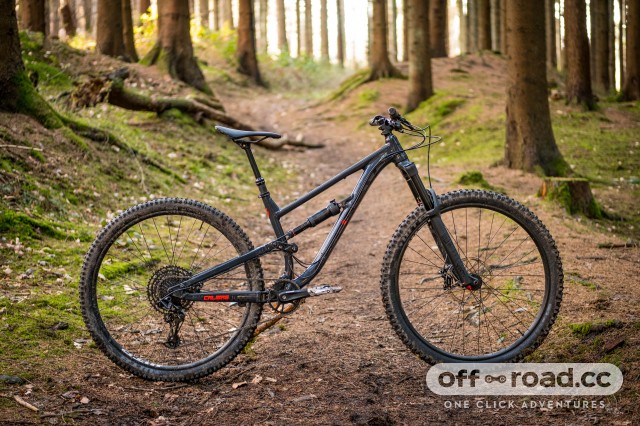