Skip to main content
Log In Register
British downhill racing ace and pioneer Steve Peat is a true giant of the sport. Here's his story. 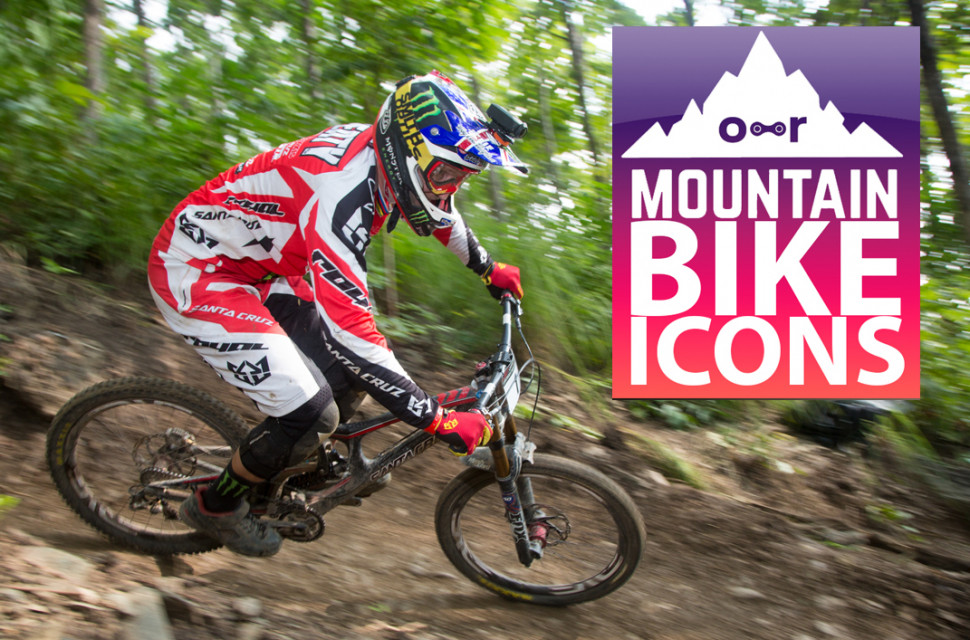 From fixing burst water pipes and unblocking toilets to becoming one of the greatest and most influential downhill mountain biking racers of all time, the life of Sheffield’s Steve Peat has been as bold and colourful as the man himself.

Peat started mountain biking in his teens when the sport was just about gaining pace in the United Kingdom - at the time he was also working as a plumber. His 6-foot 3-inch stature ensured that he immediately stood out, not only in height but with his early trademark flare and edgy riding style, which he demonstrated on both cross-country mountain biking and downhill tracks of the British national and NEMBA series races of the early 1990s. 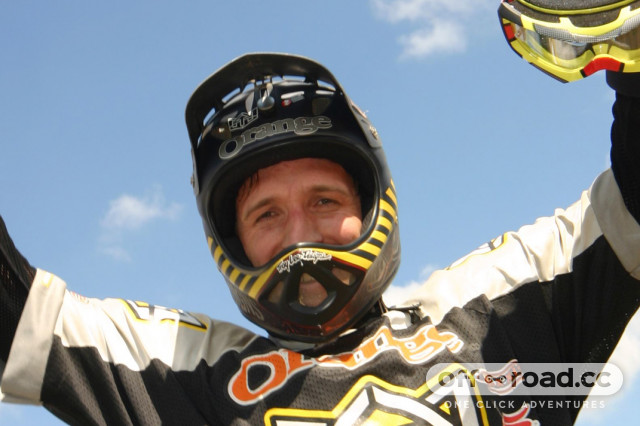 “Back in the early 90s we all rode everything; on a Saturday it was trials and downhill, and on Sunday it was cross-country,” Peat told us, recounting his days in early mountain biking.

“I used to ride the same Kona hardtail for everything and was competitive in cross country at national-level, too. I finished second in the Expert XC category National Champs as well as in downhill.”

The sport was just “barely legal” back then, having only achieved UCI World Championship status in 1990, and yet it was already trading its youthful soul for a more mature outlook.

“Things were a lot more relaxed, maybe even more fun back then. But, it was inevitable that things would go the way they have (separate disciplines). If you want to do well in a particular discipline then you have to specialise in it. For me, at that time, downhill made more sense.”

Stepping up and going solo

From being a major player on the British national scene (which was a long way off being competitive worldwide in those days) Peat scored a couple of great World Cup results and earned a ride with the GT factory team, which was to transform his career.

“Suddenly I had all of the support. I wasn’t doing everything for myself, which greatly impacted my performance.”

As Peat began to rise through the world rankings the decision was made to become a privateer, effectively turning away from the team support that had helped him towards the top and going back to basics.

“I think doing things my own way, and independently, fitted better with my character. It’s harder work, but it suited my persona.” 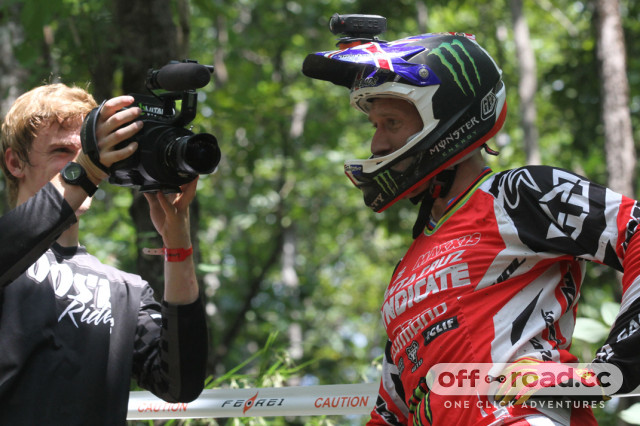 The downhill mountain biking scene grew and evolved almost beyond recognition during the great reign of Steve Peat, which could be considered to have started in awe with his opening World Cup victory in the USA back in 1998, and which drew to a close in 2016 when he finally called time on his lengthy racing career.

Throughout that time, Peat was a major presence on World Cup circuit, and he was idolised by aspiring downhillers out there. Although he took 17 World Cup round victories and three overall titles, his time at the top coincided with that of his great nemesis, Nicolas Vouilloz.

Vouilloz was a rider totally contrasting in style and persona when compared to the Sheffield racer, but one who had something of a parchment for rainbow stripes and would deny Peat finally earning his own stripes until 2009, which was one of the most applauded and anticipated downhill world titles ever earned.

What adaptations did he have to make during his career?

“Downhill and mountain biking, in general, is a constant evolution; the bikes, the training, the teams, the athletes, the riding techniques, and everything else that comes with it is about constantly trying to get better and evolve.”

“I would change up my training to suit my way, and to keep it fun each year. I would work with the Santa Cruz engineers, and other sponsors to grow with them on new products. In my eyes, it wasn’t changes or differences that I had to adapt to, it was more about pushing the boundaries to change the way we went forward.” 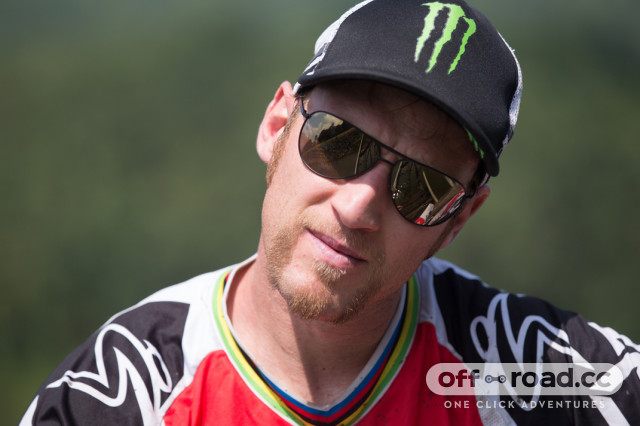 Peat continued to race into his early 40s but, in 2016, he decided to call time on his career. How tough was it to make that decision – when he still eyed another rainbow jersey?

“Fortunately, for me, I had a very happy and fulfilling career and I enjoyed every minute of it. But the decision to stop had been coming for many years, or should I say talked about for many years. It got to the time when training was getting harder, recovery took longer, and my results were dwindling because of this. When the time came it was totally on my terms, and how I wanted to do it.”

“I worked closely with Santa Cruz, and we made a plan for custom bikes for special races, although this all came together great it was also daunting, as all I had known for many years was racing World Cups. I had a plan going forward and was happy with it.”

For many, it would be his World Championship title that we would consider the highlight of his lengthy career – but how about for the man himself?

“There are many to be proud of and, any race I have ever won is a proud moment. That could be World Champs in Australia, Fort Bill World Cup, a British National or a local XC race when I first started racing - even a win at the Lisbon Downtown race, they all mean something special.”

Equally so, success isn’t always just about results on the track.

“Working with some great sponsors throughout my career is also something that I am very proud of. I've built long-term relationships with people - that will last me a lifetime.”

The regrets and lows

Having a positive attitude and self-analytic character is all part of what it takes to become a sporting great, which Steve Peat genuinely is – but what were the lows during his career, and were there any regrets?

“Not many regrets, I’m not really a person to dwell upon anything like that. The downsides would be the injuries, it’s always a bit of a bummer to get hurt and miss part of a season and then have to spend the time to recover instead of preparing.” 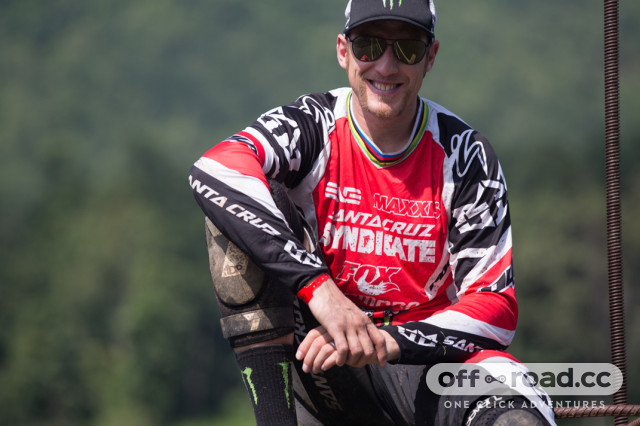 Being a role model

It’s hard to dispute that Peat was a huge influence on what was to become a long global dominance by British downhill racers – how does that feel?

“It was never my goal to influence the younger generation but I guess that came about with me winning races, and from working really hard with filming, photoshoots and with different media outlets. I would be training in the mornings and then doing photoshoots or filming in the afternoons. I saw this as furthering my career, and it wasn’t until many years later that I realised I’d left a mark on the scene.”

“I’m proud if I did influence a few British downhillers to get out on their bikes and have some fun - and I'm still proud to see our Brit crew get results.”

Known as an entrepreneurial grafter, Peat has remained very much involved with the sport since he stopped racing.

“I am still heavily involved in Santa Cruz and helping to run the Syndicate team, and we have a great group of people doing ambassador projects all over the place, and I’m still and generally involved in the sport.”

“Peaty’s Products has also been lucky enough to go from strength to strength over the last few years, and we have a fun group of people trying to make mountain bike products better and more fun for the masses.”

Being so heavily involved with the sport and industry for so long is often a passion killer but Peat still loves shredding the local trails as much as ever.

“My main go-to these days is getting out on my Bullit or Heckler e-bikes. Where I live, we have short, sharp hills with loads of great downhill-style tracks. The e-bike allows me to do more of what I have always enjoyed the most. I also get to bike parks quite often and love to bash the V 10 Downhill bike the most.”

If you do find yourself on the trails to the west of Sheffield and hear a rumble coming up behind you it could well be Steve Peat, arguably Britain’s most influential downhiller of all time – and that’s saying something.