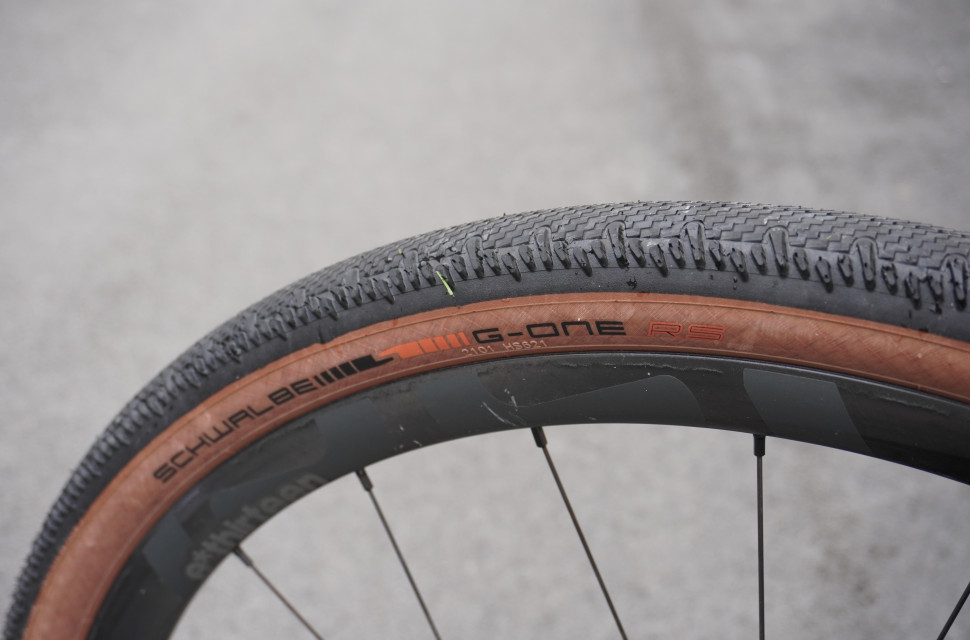 The Schwalbe G-One RS tyres focuses on gravel racing where speed is a priority and sits at the top of the brand's best gravel tyre line-up. For the price, you would rightly expect impressive performance to back up the claims and that is exactly what you get: a supple tyre that feels fast yet grips on more surfaces than the low-profile tread pattern suggests.

The G-One RS represents an evolution of the G-One R, which I actually found to be fast enough, especially for our typical British surfaces. Claiming to have 20% less rolling resistance than the G-One R, it borrows the same shoulder tread design and combines it with the low-profile X-One Speed centre section. The tyre is available in three widths: 35, 45 and 50mm, and all for 700c diameter. The 45mm version was tested, with our pair weighing in at 525g, a touch heavier than the claimed weight but still a light tyre for the size. Claimed weight for the 40mm version is 445g, which would make it among the lightest gravel tyres available for the size.

I initially mounted them to a pair of Zipp 101 XPLR wheels, which have a wide 27mm internal width. Installation was reasonably simple and inflation easy. The tyre measured 45mm at the widest area, meeting what is listed in the specifications. I also tried them on a pair of e-thirteen XCX rims with a more common 24mm internal width where the tyre measured 44m edge-to-edge. Throughout testing, I used the tyres on a wide range of surfaces and kept the pressures between 25psi and 30psi, depending on the terrain. The maximum recommended pressure for the 45mm version is 55psi (4.0Bar). The tyre is designed to be run in opposite rotational directions for the front and back, which is something that was standard practice for mountain bike tyres in the 90s and 00s (it's become less apparent in recent years). The benefits are to provide maximum grip on the rear and better braking traction on the front, although on such a low-profile tyre the differences will likely be slight. 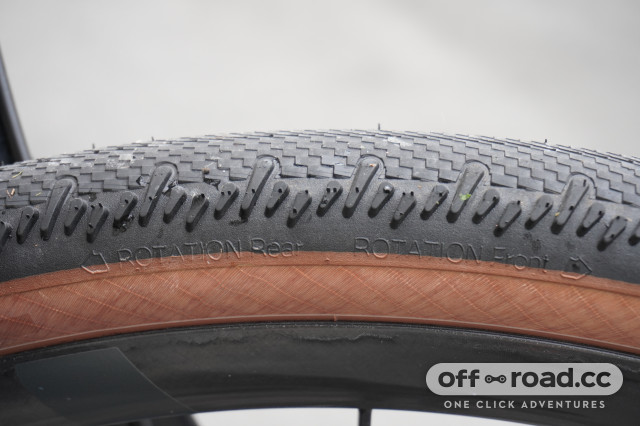 The Schwalbe G-One RS is smooth and feels fast even in the widest 45mm version. On firm surfaces it feels supple thanks to the Souplesse construction, which is also used on the G-One R version and premium Schwalbe road tyres. It feels communicative, with no surprises, allowing you to push the limits of grip and know exactly when you are approaching them. 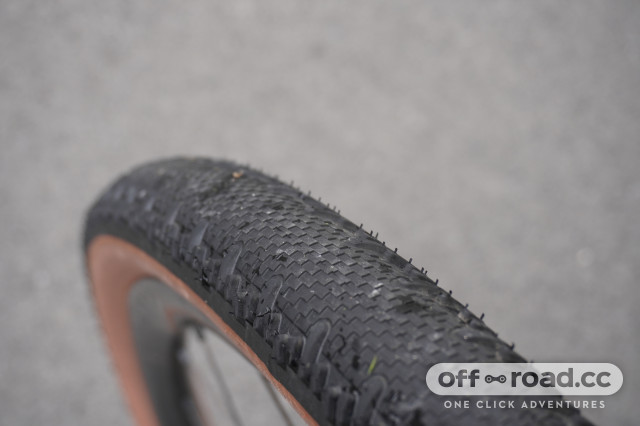 Off-road, on typical British “gravel” trails, it was confident through the corners with the more pronounced edge tread certainly working. While the generous width will have played a factor, I soon found myself flying down descents with just as much confidence as a more aggressively lugged tyre. Of course, to unlock the performance you'll need to up your confidence, flick the bike into the corner and trust the tyres for maximum traction benefits.

As a semi-slick tyre, there will always be a compromise and there are a few areas where it will struggle. Slippery mud and muddy ruts in particular, were a challenge but it would be unfair to critique it in this setting as it's not designed for mud. The low-profile ridges did surprise me and, on wet or dry trails, they gripped well – uphill or down. The only times I lost traction were either on loose gravel climbs with the rear wheel unweighted or similarly uphill on muddy climbs where the tyre struggled to bite. With the wider size having more surface area and being able to safely lower the tyre pressure, it quite simply exceeded every expectation.

I made a point of testing the pair on rockier, more challenging terrain and covered a large distance, which has included a two-day north to south Wales “WalesDuro” event. Not holding back on even the rockiest terrain they delivered on every surface, despite several tyre-to-rim impacts. 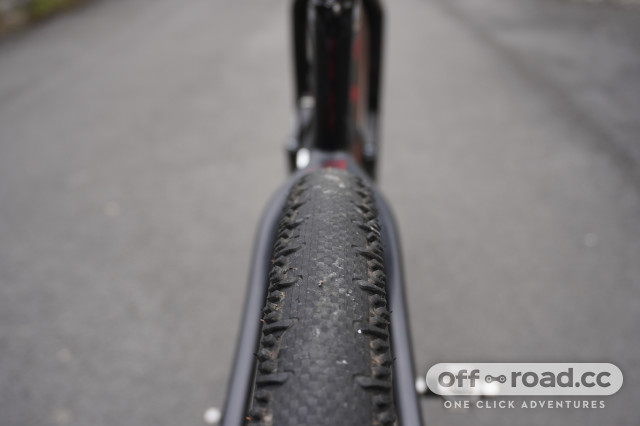 The G-One RS features the Schwalbe V-Guard puncture protection layer, the lightest offered by the brand, and covers just the top area under the tread. Throughout testing I did have a few small punctures, although these were only evidenced after each ride by way of clotted sealant residue. As a race-oriented, low-profile tyre the lifespan will be reasonably short and, with a mix of on and off-road riding, I would expect the tyres to last a few thousand kilometres. In fact, the rear tyre, in particular, started showing some wear after 1000km.

In terms of pricing, £75 is a significant amount to spend on a single tyre - especially when similar options such as the Maxxis Receptor come in at £50. The Schwalbe G-One RS tyres, however, make a convincing case for themselves when you consider the spread of width options available, not to mention the more capable tread pattern.

It provides the rider with levels of grip that belie its low-profile semi-slick tyre. Not only is it fast but it can also cope with a range of surfaces and conditions. It might not last as long as other tyres, and I would be hesitant to use it in areas around sharp rocks where punctures are very likely, but it's a race option and quite simply the best gravel tyre I have ever used.

It feels incredibly fast, and grips suprisingly well with the exception of mud, which is to be expected given the low-profile tread design.

Puncture resistance seems OK, but this is not a high-mileage tyre and designed for racing and speed.

Undoubtably helped by the larger volume and being able to run lower pressures, but it also feels supple and very comfortable.

It delivered speed – as expected, but also impressive grip and, despite taking the tyre on some extremely rough terrain, it held up without any major issues. For maximum performance, it is very hard to beat.

Speed, feel and more grip than I expected.

It costs a lot, and if used for general riding it won't last as long as other tyres.

Yes, without a doubt. If conditions are good, this would be my go-to tyre for racing or faster adventures.

If you want speed, without sacrificing grip completely this is a tyre for you.

A seriously impressive tyre that meets its bold claims, delivering a very fast ride with levels of grip on a multitude of surfaces and conditions. It is expensive, but can give levels of performance that will be justifiable for those who are looking for one of, if not, the best race-orientated gravel tyre currently available.

Coild you compare it with Vittoria Terreno Dry, that has a similar teead?

Sure. It feels faster, and much more complaint and that gives a brilliant ride quality. Grip levels are about the same, both exceed what you might expect. The Terreno dry is still a good tyre, but nothing else I have used beats the G-One RS for feel and speed.

Coild you compare it with Vittoria Terreno Dry, that has a similar teead?

Because "it's a race option and quite simply the best gravel tyre [he has] ever used". Did you not read the article?

How is this worth 2, WTB horizon gravel tyres, with super puncture resistance and similar tread?