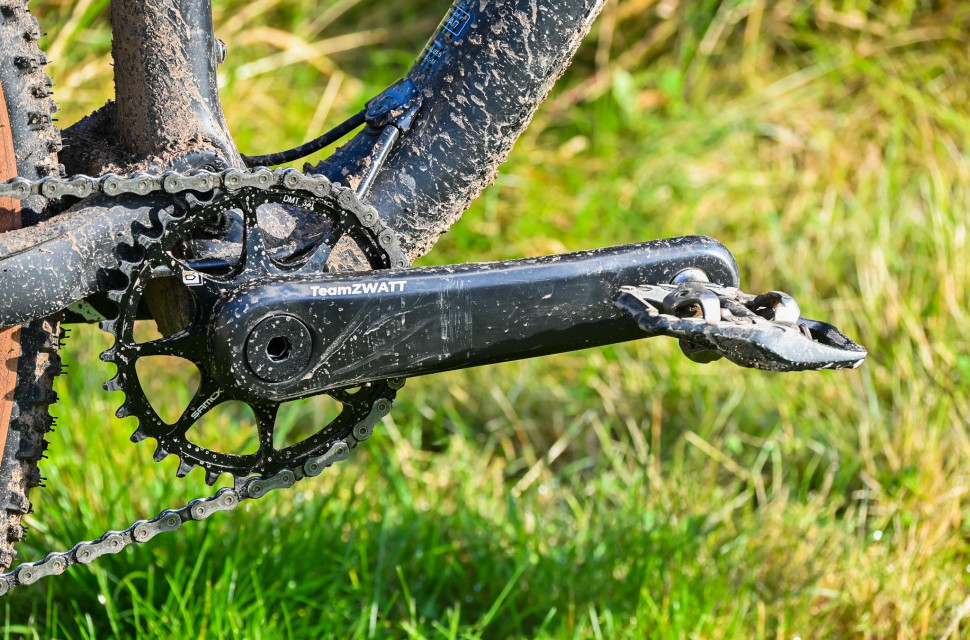 Team Zwatt's ÿding power meter is a high-performance way to train or race, with power measurement build into the aluminium spindle of the carbon fibre armed chainset. Assuming you want a new chainset, it's a pretty affordable option that provides accurate and error-free measurement as well as easy synchronisation with head units.

Measuring your power is pretty big in the world of road cycling, but it offers a lot of benefits for the keen mountain bike racer, whether that's for ensuring you don't overdo it during a race or being able to monitor your training progress. Most setups tend to be rather expensive add-ons to existing cranksets, but the ÿding power meter offers decent value as it includes the carbon fibre armed crankset, chainring and bottom bracket too.

Team Zwatt's ÿding power meter is a fairly unique design in that it houses all the clever power measurement gubbins in the 30mm aluminium axle of the cranks, meaning that all the sensitive stuff is kept out of the way of danger as much as possible. That's definitely a good thing on a mountain bike, where bashing crank arms or hooking up chainrings on rocks or logs has the potential to do some serious damage with some designs. 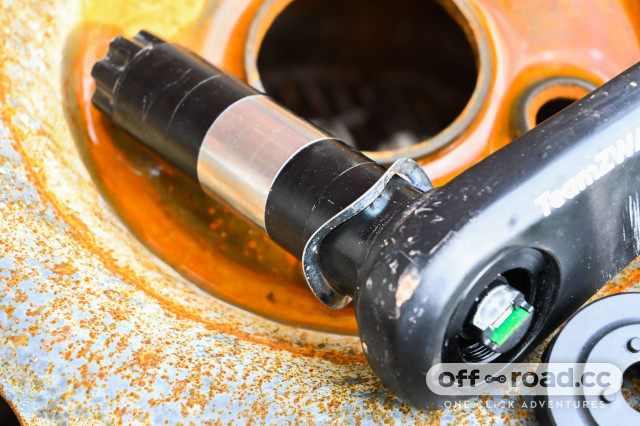 The axle also houses the battery, which is charged via a USB 2.0 connector and provides an impressive runtime, claiming over 250 hours. I've no reason to disbelieve that, with only one top-up charge needed after an extended period. It automatically switches off when inactive and it's also possible to put it in an 'airplane' mode to prevent it waking up or emitting signals when travelling.

The charging port has a plastic screw-on cover which was a bit fiddly to fit and I lived in fear of rounding out the threads on the crank's metal ones, but it was totally weatherproof in operation. There's also a little light that flashes from red to green when it's fully charged, too. 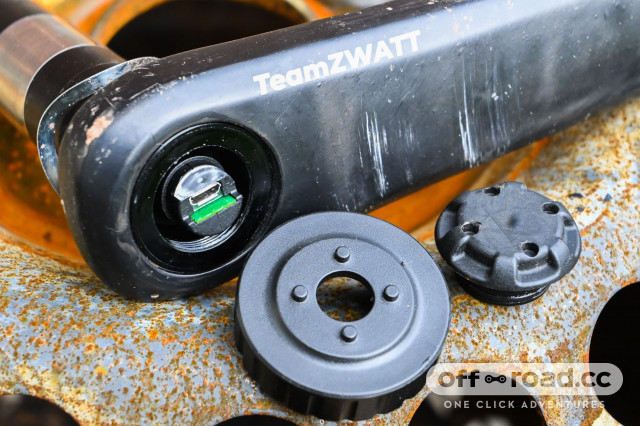 The carbon fibre crank arms are made by Samox, a well-known brand in the original equipment world. As standard, you can get the cranks in either 170mm or 175mm lengths and they come with either 30, 32 or 34T rings in Boost or standard spacing. They're very similar in shape to SRAM's pre-Eagle X0 carbon chainsets and they also use the same three-bolt direct mount chainring attachment as all SRAM MTB cranks, so there's broad aftermarket support if you want oval rings or different sizes too.

The aluminium axle has a 30mm spindle and it's possible to run it with externally threaded BSA or Press Fit 30 and BB 30 bottom brackets, all of which are easily available although the BSA requires a fairly niche BB tool to fit. If your bike has a Press Fit 92 bottom bracket, you'll need to hunt a little harder, but it looks like Race Face's PF92 Cinch would do the trick. There's no way to adjust the bearing preload, however, with tension provided by a wave spring washer and BB spacers providing further coarse tuning of chain line.

The chainset is a pretty decent weight though, with a full setup including BSA bottom bracket and 32T Boost ring tipping the scales at 650g.

Accurate, with impressive error correction on the trail 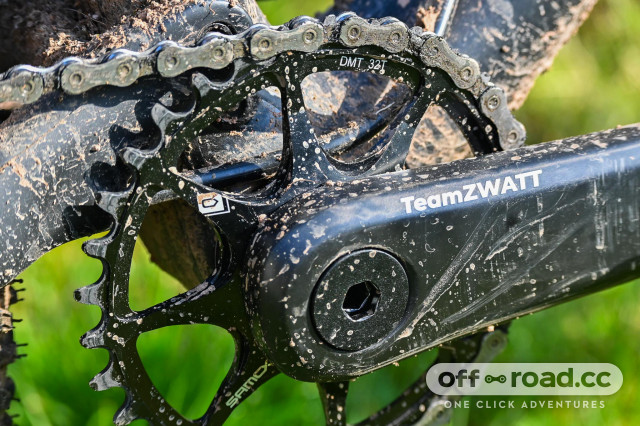 When it comes to the job of measuring power, the ÿding is impressive, though it only measures an overall power rather than individual left and right leg outputs, so some data geeks might be disappointed. It does seem to track very accurately, however, with the output closely matching that of the indoor trainer I used to benchmark it against and other metrics such as cadence matching closely too. Claimed accuracy is +/-2%, which compares well with rival units too.

Team Zwatt's big party trick is more apparent when our riding in the real world, however. Mountain bikes are a tricky prospect for a power meter as large impacts from jumps, drops and generally barrelling about create readings in strain gauges are very hard to distinguish from pedalling inputs. That can often lead to big artificial spikes in the power recorded, throwing out dodgy results.

The ÿding has had an awful lot of work done to ensure this doesn't happen and it seems to have been very effective, with no obviously erroneous high readings being recorded. These are most obvious on descending sections where you're not pedalling but high spikes can appear, likely due to vibrations and impacts.

Not having enough power meters hanging around to stick multiple measuring units on the same bike, I had to be content with repeating the same track to try and catch both units out, but the ÿding only offered up sensible-looking results when I analysed them later. I didn't suffer from any signal drop-outs, either and there was no noticeable creep due to temperature changes, though I didn't have any particularly extreme conditions to deal with. 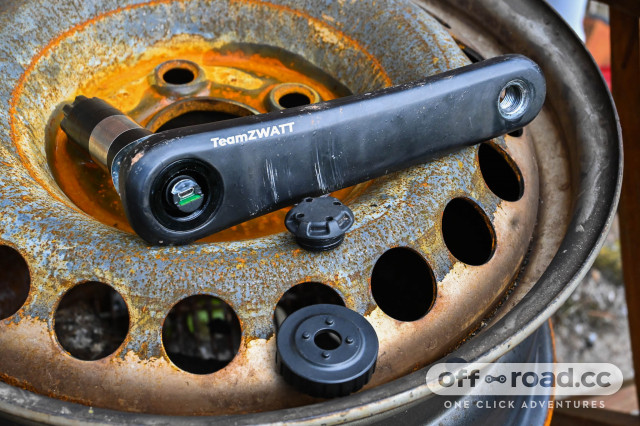 As the device uses both ANT+ and Bluetooth Low Energy, it was also very simple to set up with GPS head units, laptops running Zwift or any other way you choose to monitor or record your ride. Pairing was quick and reliable too, with calibration generally working without issue whether done through the Zwatt app or GPS head units.

Talking of the phone app, it's pretty basic, so if you're after any deeper analysis of your performance, you'll be best off using a third-party service like Training Peaks or Strava. Its main purpose is probably updating the firmware as and when needed and it does that well enough.

How does it compare?

At this sort of money, there are a few alternative options for mountain bikers, with Stages, Rotor, 4iii and Quarq being the main rivals.

The Rotor IN2Power costs £999 without chainring or bottom bracket and uses the same 30mm diameter spindle as these cranks. While it's a fair bit more expensive, you do get both left and right leg power measurements rather than a single output, which means the data is more accurate and you can figure out if your leg strengths are unbalanced. Claimed weights are a little heavier, however, but it also has an easily rechargeable battery.

Stages has long been the go-to brand for mountain bikers after power and their design replaces one or both of your crank arms with one with a small strain gauge fitted. It's a lightweight addition too, usually only adding about 30g. If you're only after one-sided power measurement, then a Shimano XT M8100 left-hand crank arm with the Stages unit costs £349. That makes a £549 cost if you include a new chainset and ring, making it a more affordable option at a similar weight of around 700g.

For those after both left and right-hand side power measurement, the Stages LR setup on XT M8100 arms costs £629 and if you want to drop weight right down, you can opt for the £1099 option of Shimano's latest M9100 crankset with Stages LR.

On the downside, it's possible to run into clearance issues with certain frame designs with Stages meters, due to where the sensor is placed on the crank arms and they use disposable CR2032 coin batteries rather than rechargeable ones.

SRAM's power meter brand Quarq also offers up another option. If you'd like their top-level XX1 Eagle carbon cranks with a Quarz DZero meter attached, that'll set you back £980 for a claimed weight of 611g, but if you have a set of compatible cranks then the Quarq spider on its own will cost £625. Again, this unit only measures single-sided power and they also use coin cell batteries. If you regularly beat chainrings on rocks, then the fact the unit is the chainring spider may be a slight cause for concern too.

Final mention goes to 4iii, whose affordable road power meters have done well in road.cc reviews. It's a very similar design to Stages, with a crank arm that has a pre-fitted meter on it, with all the drawbacks and benefits that entails They offer XT and XTR arms with a single-sided meter attached in the US, but the UK site only seems to stock road kit. 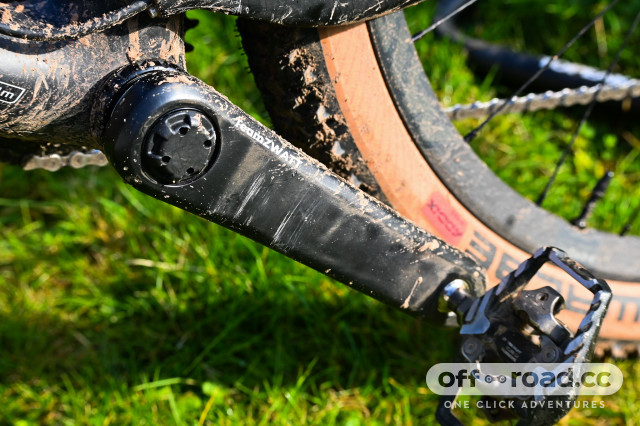 The ÿding is a sound unit for someone that wants to measure power on their mountain bike without breaking the bank.The fact that all the sensitive bits are hidden away in the axle is a big plus point and although finding a USB cable long enough to charge the unit with it still attached to you bike might be tricky, it's great not to be using throwaway batteries and it lasts long enough that it's not a big hassle.

The accuracy and consistency impressed too, especially with the lack of obviously erroneous results from impacts and vibrations I had during my testing. While there are cheaper units if you have an existing chainset you'd like to adapt - 4iii and Stages being prime examples - if you're in the market for an all-new chainset and want power measurement, then this is a pretty good value option. 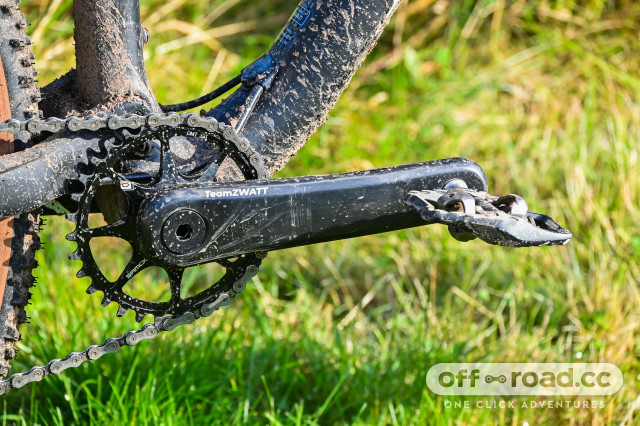 It's worth noting that I tested a pre-production prototype which is why I've not commented on the finish of the chainset or been overly mean about some elements such as the plastic cover, both which were merely okay rather than great. Hopefully, Team Zwatt will polish those up a little bit for the real thing.

Doesn't look like this is available at the moment. Shame.