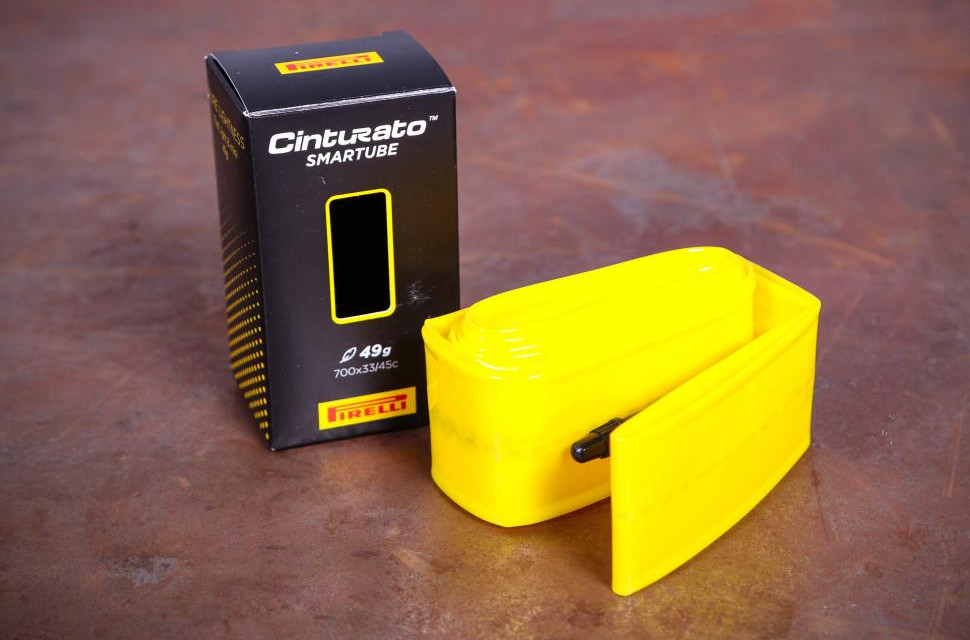 Pirelli has released a range of lightweight thermoplastic polyurethane inner tubes with the 700c Cinturato version tested aimed at gravel bikes with 33-45mm tyres and weighing a superlight 52g. You might expect that makes them fragile but my experience to date has been the opposite...

Pirelli has released 3 sizes of the 700c inner tube, one aimed at road bikes 28/35mm, and two for gravel with 33-45mm tyres. We're testing the lighter one which weighed in at 52g on our off.road.cc scales, so pretty close to the claimed weight of 49g. The heavier version is reinforced and approximately double that weight at 110g and the 650b 40/45mm version has a claimed weight of 45g.

To put the low weight into context, the lightest known butyl inner tube for road use is Continental Supersonic, which is 50g but is also known for being incredibly fragile and only fits 20-25mm tyres.

All versions come with a single valve length of 60mm, which is quite long and might look odd in shallow rims but otherwise won't cause problems. The main reason for only a single valve length will most likely be due to the fixed valve core. Should you need to extend the valve beyond the 60mm standard size you will need to use external valve extenders. 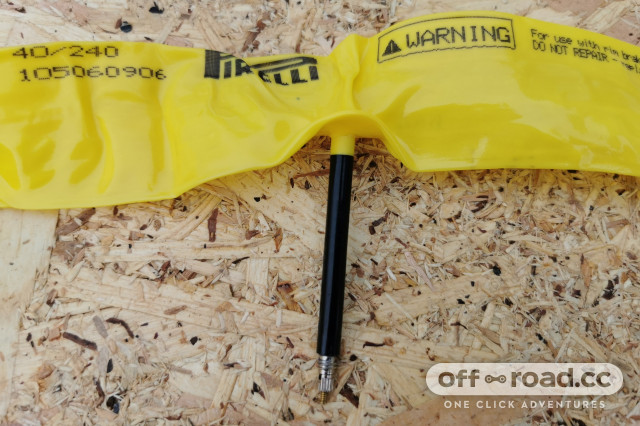 Thermoplastic polyurethane, also known as TPU is a material that has slowly gained traction within the bicycle world with manufacturers such as Schwalbe with their Aerothan and Tubolito who specialise in the material. TPU is used for many inflatable products, such as the tube within the Alpkit Aeronaut tent and packrafts. TPU has benefits including being stronger than butyl as a raw material, which allows the material to be thinner creating an incredibly small inner tube.

A Cinturato tube will take up significantly less space than your average butyl tube and when compared directly against a Schwalbe SV17 inner tube (700 x 28-45mm) which weighs 155g it is around one-third of the volume.

How do they perform? 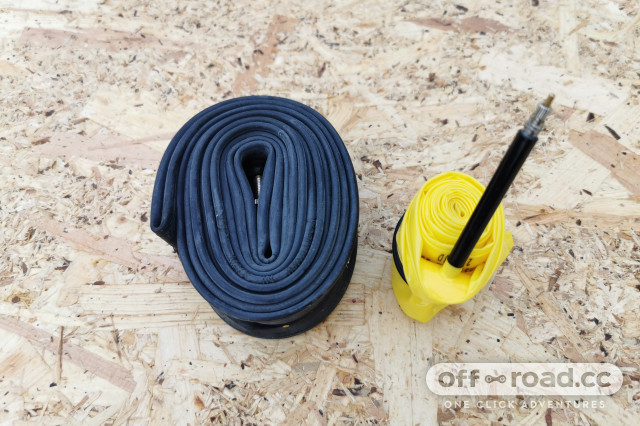 Surely such lightweight tubes are never going to stand up to off-road abuse?

For road bikes, saving weight off the wheels is a common way to increase performance but off-road, reliability and strength are far more important with inner tubes. Off-road you are far more likely to puncture when riding rough terrain or ground littered with thorns or glass which is why tubeless has become so common for both mountain bikes or gravel bikes.

To my amazement, despite sticking to my usual 30psi, rough tracks, and not going easy or changing my riding style at all, the tubes have remained intact and not suffered any punctures.

TPU is not bulletproof however and while testing Schwalbe Aerothan and Tubolito inner tubes previously, both have suffered punctures and one big issue I have suffered was catching the tube when installing, especially on road tyres. With wider gravel tyres and such a slim tube, this problem is much reduced but it is still worth taking extra care when fitting and especially if using a tyre lever.

On road bikes, TPU tubes deliver a smoother ride in comparison to butyl, however off-road due to the lower pressures normally used, this is more difficult to gauge but I found them to be as comfortable as tubeless and impossible to put one ahead of the other.

Probably the biggest downside of the tubes is the difficulty to repair, with the early versions that we have on the test having do not repair printed on them. Pirelli has now updated this and allows repairs, although it must be with specific TPU patch kits, such as the one Tubolito produces.

While the patches work the drying time is significantly greater than with a  normal vulcanised patch and can take around 30 minutes to dry enough to reinstall. In an emergency, I have used glueless patches before, which is something Schwalbe recommends with their Aerothan, although they have never lasted long, they might be suitable as a “get you home” repair, especially if using lower pressures, although Pirelli would not recommend doing so.

Each inner tube costs £28, which is quite a bit especially when you consider the difficulty in repairing them. However, when compared to other ways to reduce weight on the bike, they stack up well on £/g saved basis. Each tube costs £0.28 per g saved compared to £2.50 per g for a £1000 set of lightweight wheels saving you 400g over your stock wheels!

While £28 is expensive, they are on a par with Tubolito gravel-sized tubes at the same price as Schwalbe's Aerothan only slightly less at £25. Typically a butyl tube can be anything from £2 to £10, but I expect those looking to purchase Cinturato or TPU inner tubes will be looking beyond cost and if there is a performance advantage to be had, the price doesn't seem so bad.

For me, there are two potential uses for the Pirelli Cinturato SmarTUBE, with one being simple to use and as an extremely lightweight replacement for either tubeless or a butyl inner tube. The second being due to the incredibly small size, carrying as an extra “just in case” spare, or second spare tube with my main recommendation if that is the case to be extra careful when installing to avoid catching in the tube and ripping the material.

The slow repair process is the biggest drawback with these tubes, requiring a specific TPU patch kit and time. And whilst I can see the appeal for die-hard inner tube fans wanting to create the lightest wheel weight possible, for me tubeless is still the preferable system. That said at 52g per tube, the 700c Gravel Pirelli Cinturato SmarTUBEsb is phenomenally light and has proved to be surprisingly tough when ridden off-road at low pressures. Definitely worth considering. 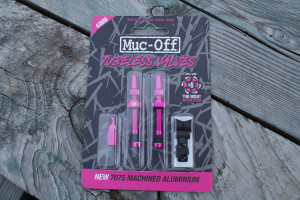 Pirelli says: Cinturato™ SmarTUBE is the cycling inner tube designed for gravel, adventure and endurance. The tube provides all the benefits of the innovative TPU (Thermoplastic Polyurethane) and thanks to a specific formulation delivers the best performances for those who are looking for superior puncture resistance with low weight and compact size. Cinturato™ SmarTUBE is a one-of-a-kind inner tube: reduced weight and compact with an unparalleled puncture protection when compared to standard butyl inner tubes. The ultimate solution for the cyclists that take on long travels and explore remote lands, the low weight and compact size are crucial when packing water, food and extra clothing. Compatible with disc and rim brakes. Presta valve, black

Very light, but no punctures yet. Pirelli do also make a more robust reinforced version for the same size, claimed at 110g.

Very light and surprisingly despite riding lots of rougher tracks I had no punctures while testing.

Expensive at £28 each. If you do puncture, a specific repair kit is required and this has a slow (~30 minutes) drying time Single valve length of 60mm and if you did happen to run very deep rims the fixed valve core will mean only external valve extenders will work.

As a lightweight spare

Yes - if lightweight or low volume is important

At 52g per tube the Pirelli Cinturato SmarTUBE but designed for wide, gravel bikes are phenomenally light and yet they have proved to be surprisingly tough when ridden off-road at low pressures and no easing off in the slightest. The slow repair process is the biggest drawback, requiring a specific TPU patch kit, which is at least reasonably priced and taking approximately 30 minutes to fully dry. For me, tubeless is still preferable, although I appreciate some are die-hard inner tube fans and in that case, if you want to create the lightest overall wheel weight possible, these are at least worth considering.

I've been using the road version of these tubes for the past few months and the difference in weight and comfort was instantly noticebable. I must caveat that I did change my tyres from a wire bead 26mm to a Pirelli 28mm folding at the same time so I know that the gains are not just the tubes alone. No punctures over approx 2,500 miles in that time.