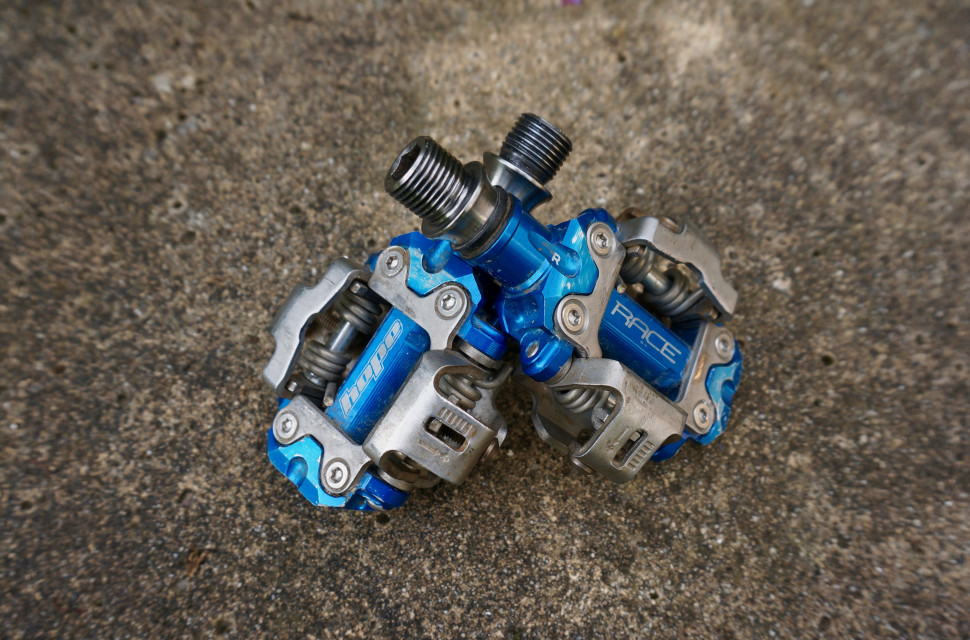 Hope’s Union Clip Pedal RC comes in six colours and offers a unique mechanism housed in a dual-sided, beautifully CNC machined body. As one of Hope's best mountain bike pedals, they spin on three bearings, a self-lubricating bush and a titanium axle. They are fully serviceable, can be accessed with regular bike tools, and come with a two-year warranty.

Hope makes a range of pedals and this version, the RC, is designed for cross-country mountain biking, cyclo-cross, and gravel riding. All of Hope’s pedals are designed with a unique cleat making them incompatible with any other system on the market. It's a brave decision for Hope to have gone with, and one that ultimately could prevent many riders from trying it out which is a shame as it offers an excellent experience. 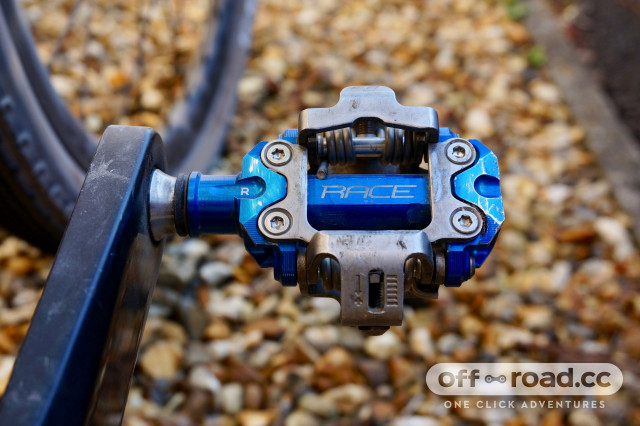 The Union Clip Pedal - RC  (Union RC for short from now on) certainly stands out in bright blue, but do they have the performance to match?  I put them through a six-month extended test period to see how they perform.

The Union RC is delivered with a smart box and two sets of stainless-steel cleats (4-degree and 5-degree) to give users choice in the amount of float and the release angle required for the pedal mechanism to let go. Both cleats allow a small 2mm of lateral movement. 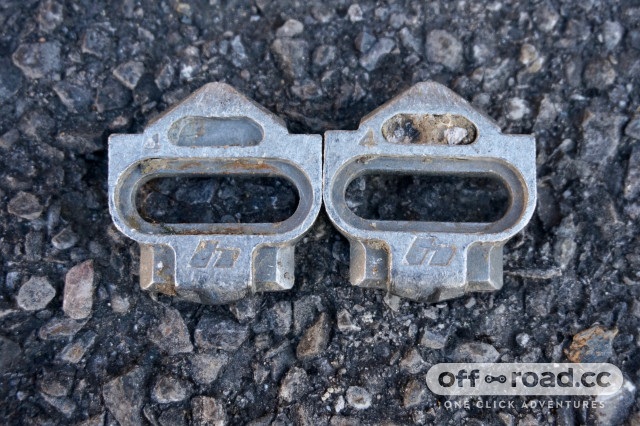 The pedals weigh in at a pretty light 322g, not including the cleats and bolts which puts them in a similar category to Shimano XTR (320g claimed), Crankbrothers Candy 7 at 320g, though a little heavier than Time’s XC8 at 290g and Crankbrothers Eggbeaters 3 at 290g, but they have no pedal body at all.

In each box of Union RC pedals is a very important cardboard cleat-channel-depth-gauge cutout which allows you to measure your shoe's cleat box depth and work out what spacer shim you need to use (if needed). This is important as if you use a shim that's too fat then your shoe will be floating on top of the pedal and not getting any support from the body. If you under shim the pedal, it will be hard to click in and release and you’ll find it hard to wiggle your foot in the clip.

It’s worth checking both shoes as I have a pair of heavily used gravel shoes that have different depths of the channel due to sole wear that required different thicknesses of shims under each cleat. Using different cleats means that both shoes feel the same on the pedal. The Union RC pedals offer less shoe support than the Union TC version tested by Liam or GC version for Gravity riders. 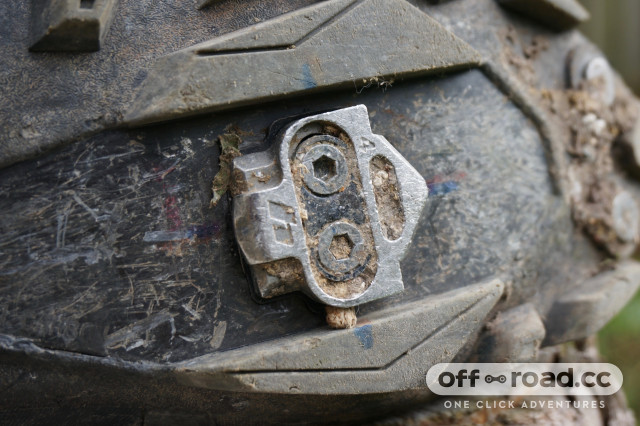 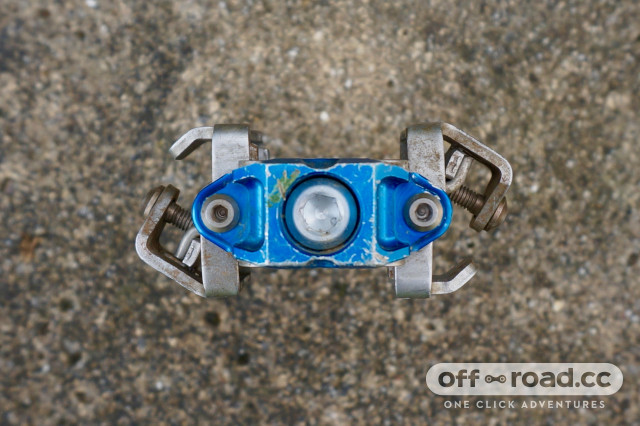 Clicking in is more of a solid snap than a click, very easy if you have used clipless pedals before. I found it both natural and straightforward. If you haven’t tried clipless before then, as with all clipless pedals, it’s best to have a bit of practice in a local park so if you do fluff it up, the grass will be kind to you. Make sure that the release tension screw is fully unwound so that it’s as easy as possible to start with, then simply push forward with a natural downward pressure and, clunk, you’re in.

Releasing is not that much harder. Simply swing your heel outwards rotating around the cleat. Practice repeatedly and get used to the release angle. You can actually unclip inwards by the same degree but your frame or wheel might block this direction when riding. 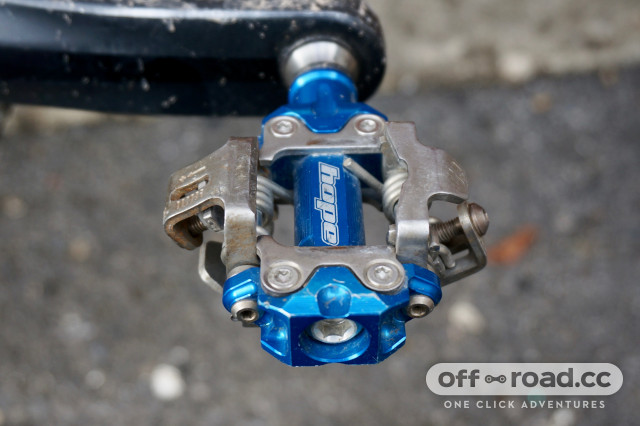 As a bit of Time ATAC pedal stalwart (thanks to their 6mm of lateral float), I was a little nervous about trying a new system and how my old knees would feel about the change. The Union RC holds the cleat tightly on top of the pedal but doesn’t have quite the lateral float of Time which could be important to those with sensitive knees. Although, while I did notice the difference in this lateral float, it was not an issue and my knees have been fine.

In use, the Union RC pedal has performed perfectly every time with just two exceptions. First I started having difficulty with knee pain on the right pedal which I assumed was the lack of float but it wasn’t. It was a cleat installation error, or rather a combination of carbon sole, 1mm plastic shim, and the cleat moving quite a large amount and therefore wrecking my position and ride.

This has never happened to me before, normally I measure repeatedly and fit and forget. I suspect it might be due to the plastic cleat sliding on the carbon sole and an extra turn of the T25 bolt being required to really sandwich that plastic cleat firmly to the shiny sole. It's a pretty tight fit with the bolt length and the 1mm shim on several of my shoes, so just make sure you do them up tight if you have a similar combo. 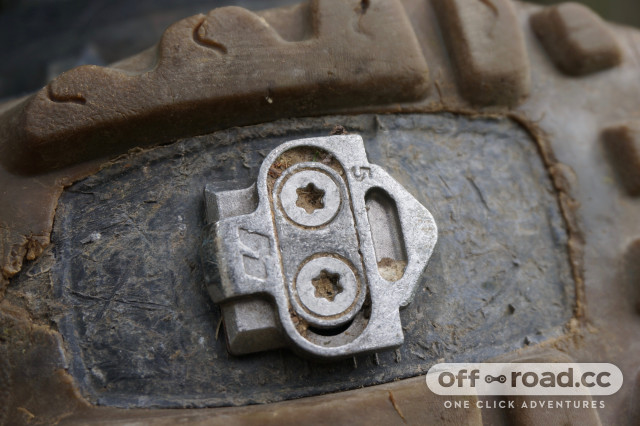 The second occurred during Gritfest where I got a small angular piece of granite stuck between cleat and shoe preventing engagement. The Fizik X1 shoes have a narrower cleat box, 4cm wide, with much less space around the cleat than the Quocs I wore on the same surface on day one, so I think I was very unlucky here with the floor covered in granite chippings, but no amount of stones, mud, wood and cack has caused an issue since. 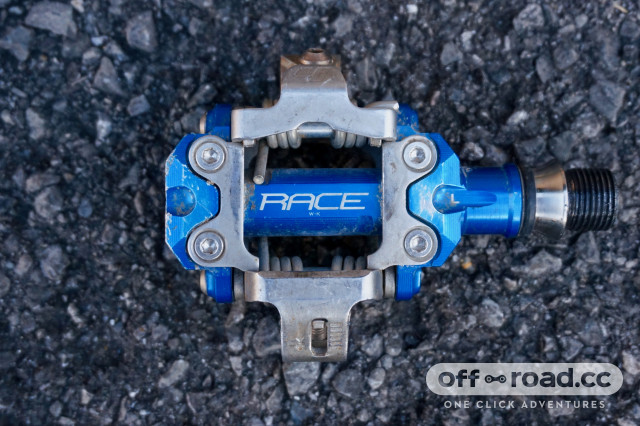 Unlike my recent experience with other XC clipless pedals, I’ve not heard a peep out of the axles on the Union RC pedals. Silence is their middle name and I can now enjoy long climbs without the accompanying creak from each pedal stroke. The blue anodising is starting to wear, more on my left which is my favoured dismount foot, but they still look great. The mechanism still looks fairly fresh after six months and continues to work as new on both sides of each pedal. It’s fair to say I’m impressed with the overall durability of these pedals.

The Union RC’s main competitors are Shimano’s ubiquitous SPD pedals, and at this price point, that’s XTR at £140. Riders who do not get on with Shimano SPD mechanisms with their knees should try the equally light Crankbrothers Candy 7 at £165 or the Time ATAC XC8 at £140 with a 30g weight saving. All good options. If you wear stiff race-soled shoes then give the £130 Crankbrothers Egg Beater 3's a go at a claimed 10g less than Time's XC8s. Matt liked them but they need a stiff sole and knees that like a lot of movement.

The Hope Union pedals are not cheap at £160, but they weigh a competitive 322g a pair and have super durable Ti axles, three bearings, and stainless steel cleats and clips, so should outlast some of their competitors. They are also fully serviceable and parts are readily available from your local bike shop, and that definitely beats some other brands. The Union pedals are a good investment.

Only one instance of cleat and clip connection due to wedged stone in between cleat and shoe.

Lookng smart and running smoothly after six months of use.

Spot on most of the competition at 322g ACTUAL weight not claimed.

Some knee concerns for those that require more than 2mm of lateral float. Time and Crankbrothers offer more.

Another £20 on the competition but serviceable rather than trash.

The cleat and spacer make for a slightly difficult fit with the supplied bolt 'just' engaging the shoe (both on Fizik X1 and Shimano RX6).

A good set of pedals which have performed brilliantly apart from one small stone issue at Gritfest. My knees are still working after testing and that is a good sign.