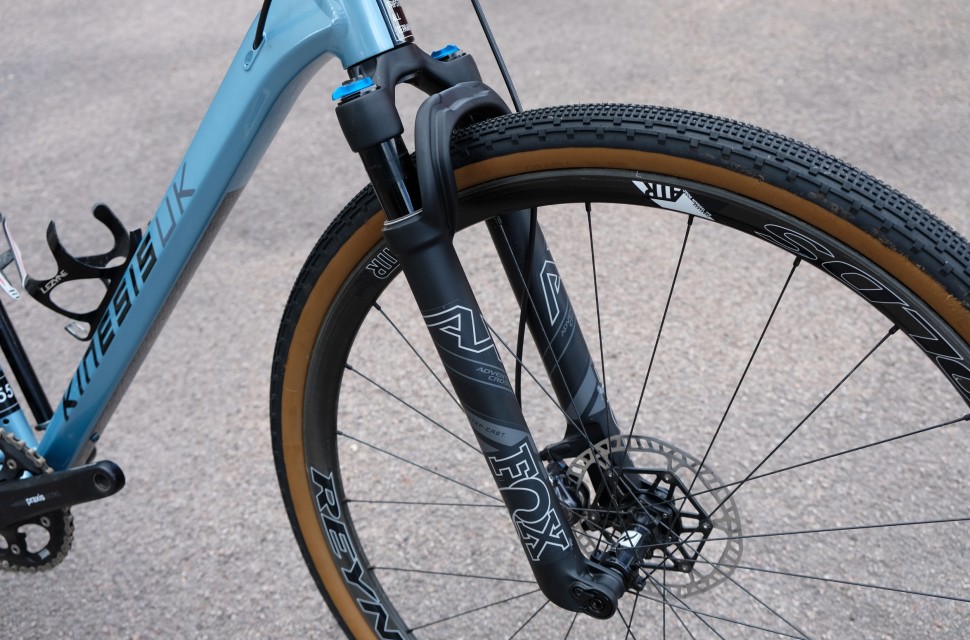 Dave Arthur
|
Apr 20 2019
|
Overall
Quality
Performance
Value
What's good?
What's not?
Buy if...
You really need suspension on your adventure bike and don't want to switch to a mountain bike

Suspension specialists Fox shocked everyone when it released a 40mm travel suspension fork designed for adventure and gravel bikes earlier this year.

After some extensive testing, including the Grinduro, I can confidently say it works very well and is a revelation in the more challenging terrain you might want to take an adventure bike, but it’s not without its downsides, chief of which are the high price, extra weight and long axle-to-crown that might play havoc with your geometry, and compatibility issues with many frames.

Provided it fits your frame, is the AX fork any good and is it worth the money?

That’s a tricky question to answer. A lot depends on the sort of riding you are and the terrain you’re riding over. For smoother gravel roads - like those in the Dirty Reiver for example or around Salisbury Plain - I didn’t find the benefits of the fork outweighed the negatives, but over very long distances the culmination of the shock absorption swung the dial back in their favour. 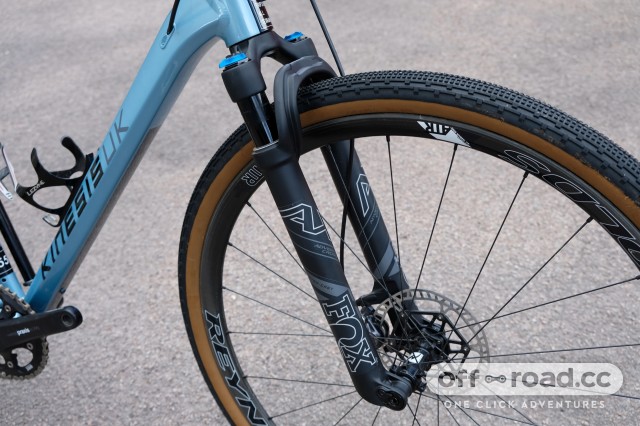 But if you want to take an adventure bike into the sort of terrain that a mountain bike would probably be the better choice, the fork does provide a big dose of extra capability. Though 40mm doesn’t sound like much it’s enough to just smooth harder impacts with rocks and roots and take away the harshness that can turn you from pilot to passenger on a very rough descent. 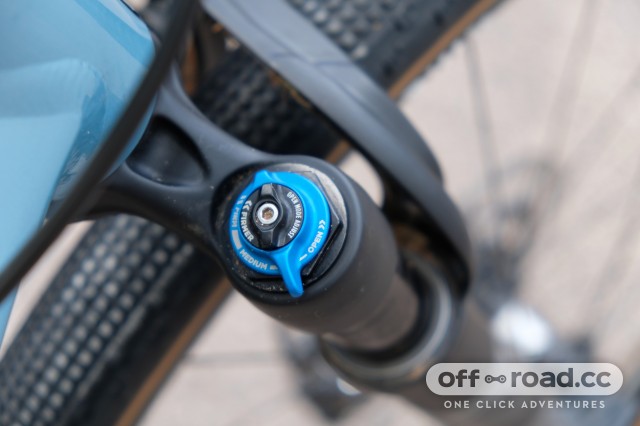 Rather than design a fork from scratch, Fox has actually modified one of its existing 32 StepCast 650b mountain bike forks and reduced the travel to 40mm. That the company took this approach is a result of the guys and girls at Fox wanting to experiment with a short travel fork for their lunchtime rides, and delved into what is probably a very large parts bin and threw a fork together.

That meant they didn’t have to design any new parts and could tinker with the fork until they got it just right. It also means all the parts are standard, and they’ve utilised some of the company’s best components. It’s an air sprung fork with the FIT4 EVOL damper providing three levels of firmness, from open to locked out, adjustable by a dial on the top of the right leg. 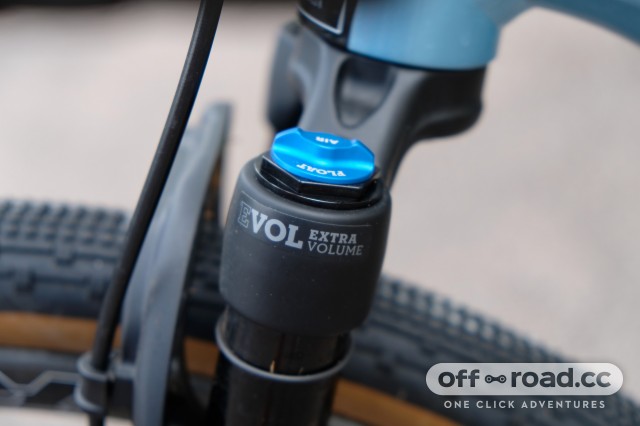 This dial is fairly easy to access when you’re riding along and depending on the terrain you’re riding over, you’ll probably want to make use of it as you transition from the smooth to the rough. The middle setting provides a good level of support for the majority of terrain, but you’ll want to employ the locked out setting for road climbs to stop it bobbing.

There’s some adjustment to fine-tune the fork to your preferences. In the open position, you also get 22 clicks of low-speed compression, adjusted via a small dial at the centre. It’s a bit overkill when you have just 40mm of travel to play with though. Meanwhile, at the bottom of the right leg is rebound adjustment. It’s worth experimenting with the both, especially the latter, to get the right balance for the riding you’re doing.

You’ll need a high-pressure shock pump to add air via the valve at the top of the left fork leg. There are no recommended air pressure settings but going by the amount of sag when you’re sat on the bike helps guide you to the right pressure - I settled on about 100psi. This offered a good compromise between support for road sections and plush enough to handle the technical trails.

There is further adjustment in the air volume reducer spacers that can be added to the left leg where the air spring resides. Essentially plastic tokens that snap into the bottom of the top cap (it’s an easy task, just remember to let all the air out first) and reduce the volume of the air spring. They’re of most use to heavier riders that might find the fork going through the travel too keenly, and two additional tokens in the box provide tuning options.

The fork has a 15mm thru-axle with a neat Kabolt skewer that provides a cleaner appearance than the often ugly levers on some thru-axle systems. It does mean you’ll need an Allen tool to remove it but this isn’t a market where speedy wheel changes aren’t an issue. With rapidly changing standards 12mm thru-axles are becoming increasingly common on road and adventure bikes, but most decent wheels let you change the end caps so I had no problems adapting my wheels from 12 to 15mm to accommodate the fork.

The disc brake caliper fits a post mount and natively supports 160mm rotors. I had no issue swapping from the rigid fork on my test bike to the Fox. Tyre clearance is generous, it easily swallowed a 43mm tyre on a 700c rim and it’ll also take a 650b wheelset with a 2.1in tyre, so you’ve got plenty of options for tyre choice. 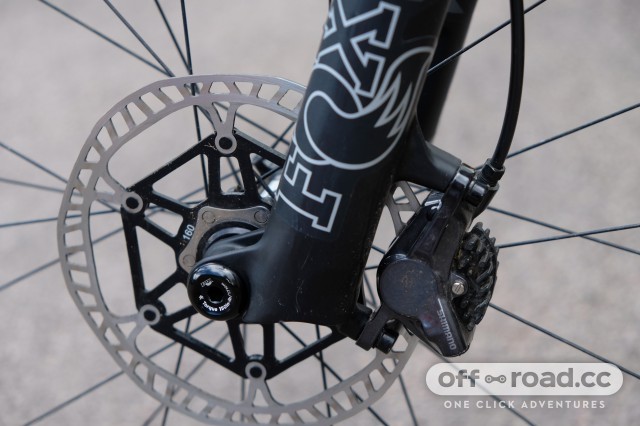 Not without its issues

There are two big issues with the Fox AX fork. The first is that it simply might not fit your bike. The raised crown compared to a regular rigid fork is going to foul many bikes with straight downtubes, so you really do need to check this before you hit the buy button. Fox is expanding a compatibility list on its website so I urge you to check it first. Fortunately, the new Kinesis Tripster AT essentially uses a mountain bike downtube with a kink that provided the necessary clearance for the fork dials, and It worked just fine on this frame.

The other issue is the axle-to-crown height. At 427mm it’s longer than most rigid adventure forks which are in the 400mm region - the Tripster fork measured 395mm. That extra 32mm in fork length impacts the geometry by raising the front-end and slackening the head angle. Fox advises any bikes with about a 69-degree headangle are going to behave strangely with the AX fitted. 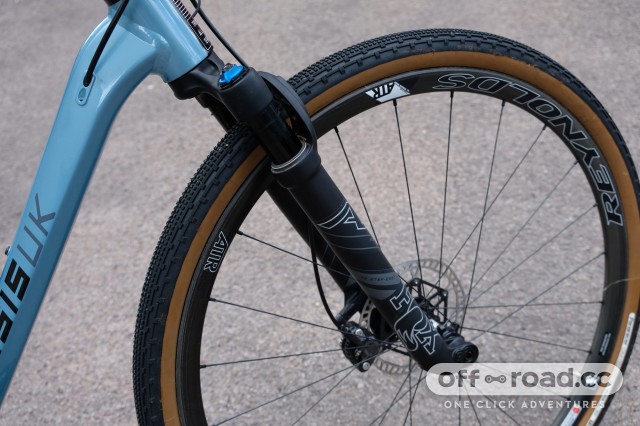 The Tripster AT that I used to test the fork has a 70.5-degree headangle and was close to 1-degree slacker when static with the Fox AX fitted, but when sagged the difference was reduced. I fully expected the fork to mess up the handling of the Tripster but I was surprised to find it really didn’t. Okay, it was a little more relaxed at times, not quite as direct as with the rigid carbon fork, but in off-road scenarios, the small negative impact on handling was compensated for by the increased capability of the 40mm of smooth and well-damped suspension travel.

In very technical and demanding off-road terrain, and especially when the gradient pitched sharply down, the slightly slacker headangle became a bonus, placing a bit less weight over the front-end than previously and making it a bit less of a handful to negotiate tricky descents safely and in control. It certainly pushes that invisible line dividing adventure and mountain bikes back into the mountain bike yard more than before.

With the Fox, AX fitted to the Kinesis Tripster AT it didn’t take too long to get used to it. It raised the front-end a bit but flipping the stem offset that to a degree. While the slacker headangle softened the handling on the road, in off-road situations it didn’t harm its performance too adversely.

The suspension works marvellously. It’s smooth and well damped and there are plenty of tuning options for dialling it into your preferred setting and to suit the sort of riding you’re doing with it. The rebound damping does a good job of keeping the fork controlled even during rapidly repeated hits.

There are obvious comparisons to be drawn with the Lauf Grit fork. Where that unusual looking fork does well is being lightweight, not affecting geometry and no setup hassle. But the glass fibre leaf springs are undamped and this provides the biggest disadvantage when the trail gets really rough and does a good job of resembling a pogo stick! Keep it on smoother trails and it works well. Where the Fox AX pulls ahead is in providing genuine suspension performance that increases your capability on rough trails and it pulls ahead of the Lauf in how much speed you can carry through very technical sections full of roots and rocks and other obstacles.

So the Fox AX works then, providing proper suspension in a short travel adventure-specific package, but it’s expensive, potentially complex to setup, won’t fit all frames and is longer than a rigid fork it’s replacing. But by far the biggest question you need to answer if you’re considering the Fox AX is how much do you really need suspension on an adventure bike? That all comes down to where you live and the terrain you’re regularly riding over, and the style of rider you are. If you’re regularly finding the limits of a rigid adventure bike the Fox AX might be a worthwhile upgrade for you, but for most people, I suspect it’s probably a step too close to a mountain bike. 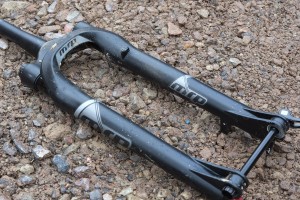 The FIT 4 damper features three on-the-fly settings —Open, Medium, and Firm— making the AX adjustable for any adventure you find yourself on, planned or not. A lightweight 32 Step-Cast chassis with lockout means you'll still get great power transfer on those long stretches of fire road and pavement. With 40 mm of travel, you'll have predictable cornering and descending when the route gets rough.

Smooth and composed suspension with lots of adjustment

Heavy and raises the front of the bike and slackens the steering, also won't fit all frames

While not a purpose-built gravel and adventure fork, the Fox AX does raise the question of whether suspension is necessary on an adventure bike, and at times it was certainly a benefit, but it doesn't come without some serious issues

Seems like a lot of money for that much travel and compromise. I'd be interested in a proper head to head with the Lauf.

5 cool things from e*thirteen, Bluegrass, YT and 7mesh
More cool kit, pumps and components have landed for us to test
Feature

Velo Saddles: The story of Stella Yu
The name of Velo Saddles may not jump out at you, but the chances are that you're riding a saddle made by this Taiwanese master seat maker, led by a remarkable woman.
Review