Skip to main content
Log In Register
TRP Trail EVO brake review £180.00
A powerful and consistent brake ideal for gravity riding, though weighty and pricier than rivals of the same ilk 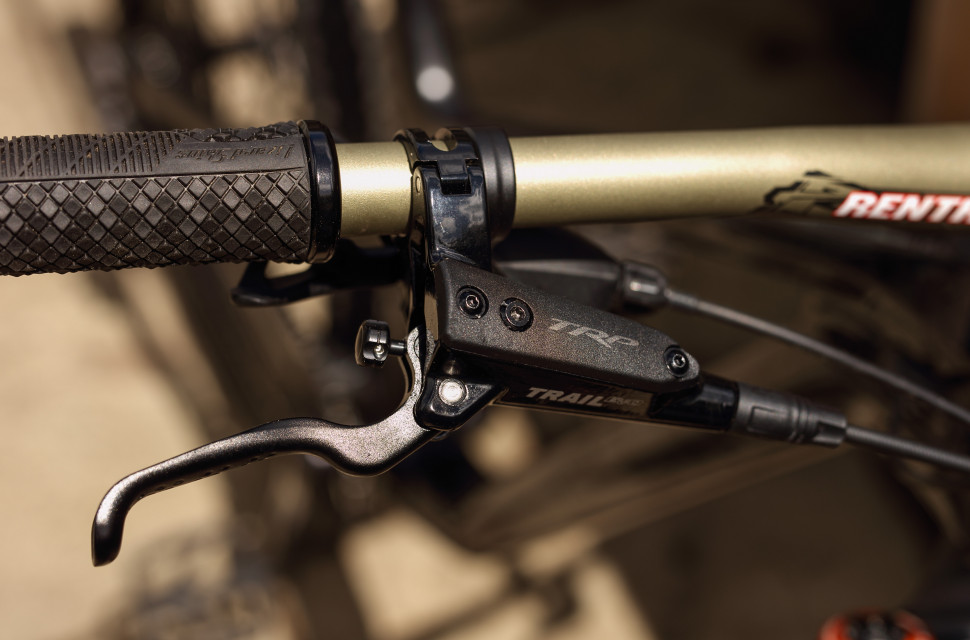 Benefitting from a lot of tech found on the brand’s range topping DH-R brake, TRP’s Trail EVO stoppers produce enough power to slow even the weightiest of bikes with impressive consistency. However, the lever feel won’t suit everyone and they’re certainly not the lightest options in the best mountain bike brakes category.

For 2022, TRP’s family of brakes saw quite the overhaul. Along with three new pad compounds, the brakes have adopted a new, Aaron Gwin-inspired lever shape and slimmer, 5mm hoses across the board, which boosts hydraulic pressure, according to TRP. This has not only helped thwart heat build up but also made it easier to route internal hoses. 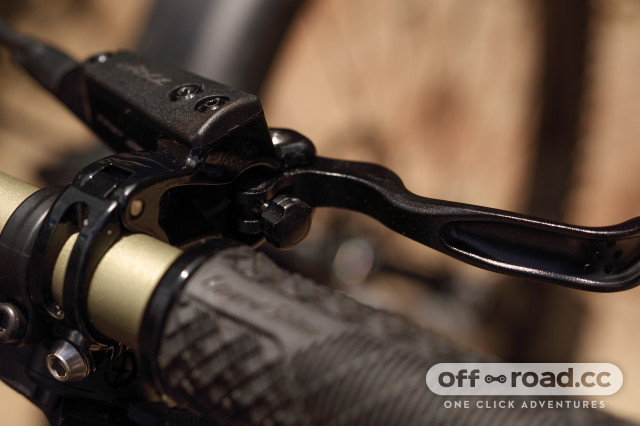 The brakes also run on a thinner mineral oil than before that’s claimed to deal with temperatures up to 230 degrees, not to emntion improve the bleeding process. It’s nice to see the use of mineral oil here too as it’s less likely to ruin your frame’s paint and the environment.

As the middle product in TRP’s braking line-up the Trail EVO is built with a die-cast, forged alloy construction but rather than the 9mm lever piston found on the DH-R, it gets a 10mm piston. It’s said that this offers easier modulation, which helps with control over longer descents. It also benefits from tool-free reach adjust. The brakes also come sorted with four-pot calipers, which is a powerful, fade-free configuration. 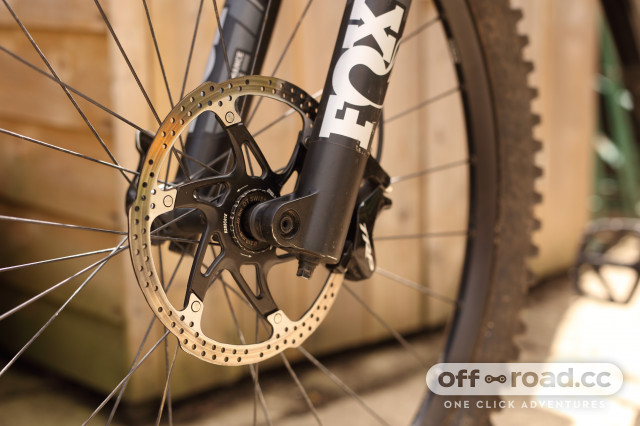 Of course, as a TRP brake, it’s optimised for a thicker, 2.3mm rotor. This dissipates heat more effectively but comes with a clear weight penalty. For example, TRP’s 203mm rotor weighs 88g more than Shimano’s XT RT86 Ice-Tech rotor in the same size.

While we're on the subject of weights, the caliper and lever come in at 302g.

Installing the Trail EVO’s was impressively easy as everything is pre-bled and sealed with removable caps. The single-bolt clamp lever clamp also makes the job that bit quicker. 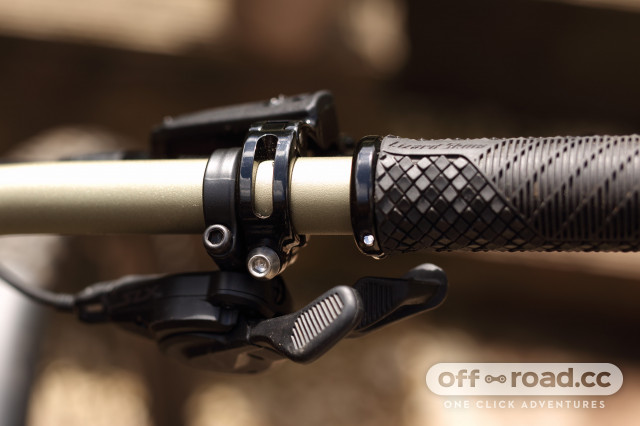 Bleeding the Trail EVOs is a reasonably simple task that uses a very similar method to how you would bleed a Shimano brake. However, the cup that’s screwed into the lever uses a fatter thread, so it will only play nicely with TRP or Tektro bleed cups. 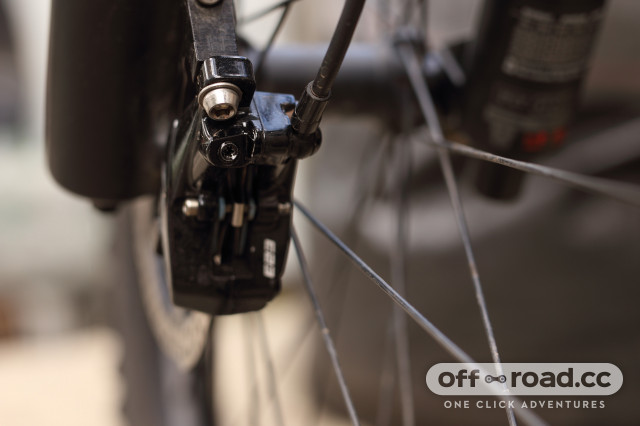 It’s an easy method that I’ve come to like, especially when it comes to performing a quick lever bleed. However, the bleed port is worryingly close to the inside of the caliper, so be sure to take care when bleeding - and clean the caliper thoroughly afterwards to avoid contaminating the pads and/or rotor.

One thing that was very noticeable with the Trail EVOs is that it took a little longer than usual for them to bed in. This is totally understandable as the fat rotors take a little longer to warm up in order to mate with the pads.

As soon as the two became firm friends, power was plentiful and confident. Lever feel, however, is where it gets a little interesting. You don't need to pull them in an awful lot before the brakes engage which might not be to everyone's taste - but they do well to quell progress. Once the brake does engage, the lever firms up nicely and, against previous TRP models, modulation seems to have improved to a point.

As I said before, the short lever throw can apply a lot of power surprisingly soon, so in areas where grip is questionable, you'll have need to be softer on the brakes to avoid sudden lockups. 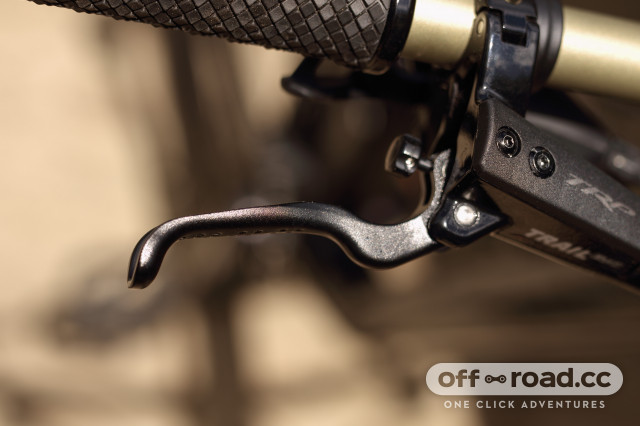 I quite liked the lever’s shape. It can be likened to what’s found on most of Shimano’s brakes but it’s fatter and the end curls around the finger for better ergonomics. For me, it felt like a tailored fit and it wrapped around my finger snugly and comfortably. There are holes and indents cut into the lever's blade to boost grip, however, I didn't really notice them. 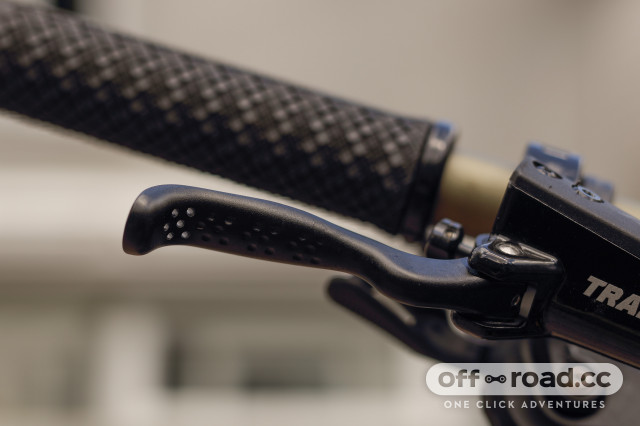 All of TRP’s efforts to dissipate heat have certainly not been in vain. Down some of the longest descents on my test routes, braking was consistent and crisp. The lever’s bite point is just a little far away from the bar for my tastes, which resulted in some fatigue later into extended descents. Unfortunately, there’s no bite point adjustment available to fix this issue.

At £180 a brake, the TRP Trail EVO brakes aren't the cheapest on the market with rivals offering more adjustment at a cheaper price. That Shimano’s SLX four-pot brake is priced at £175 with 220mm rotor prices topping out at £50 a piece. These rotors are thinner and are likely to overheat sooner compared to the TRPs during longer descents.

SRAM’s Code R brake is cheaper still at £170 an end. They might not be quite as powerful, but they do offer more modulation. A 200mm CentreLine rotor will set you back £50.

Spend £15 extra an end and you could go for the Hope Tech 4 E4 brakes. They’re built much nicer with a full CNC-machined construction, better lever adjustments although bleeding is a bit tricky. These are also available with 2.3mm rotors which certainly put some competition in the face of the Trail EVOs.

If you’re after all-out consistency and a strong lever feel with short throw, the TRP Trail EVO brakes are well worth a look. While you may have to spend a little more than some its rivals, the power is impressive and totally consistent making them ideal for gravity-focused riding. 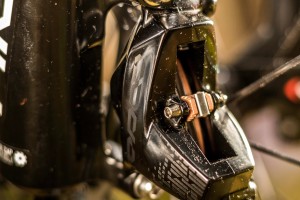 TRP says, "When designing the all-new Trail EVO we wanted to create a brake system for the specific needs of modern mountain bikes. With the added speed and potential weight from an electric motor and battery, these bikes will typically generate more heat than a typical mountain bike." While not tested on an e-bike, braking is strong and fade-free.

Performance is great. Powerful, consistent and fade-free. Though lever feel won't be to everyone's tastes.

Pads have kept up with test period rather well.

Weighter than similar brakes but that's down to thicker rotors.

Comfortable lever blade but the bite point is quite far away from the bar and range of adjustment is slim.

A bit pricier than similar brakes but none of them are built for fat 2.3mm rotors.

Overall, the Trail EVO is a solid brake that'll please most e-bikers and gravity riders. It's just the brake feel that may turn some people off.

A solid and reliable brake with plenty of stopping power.