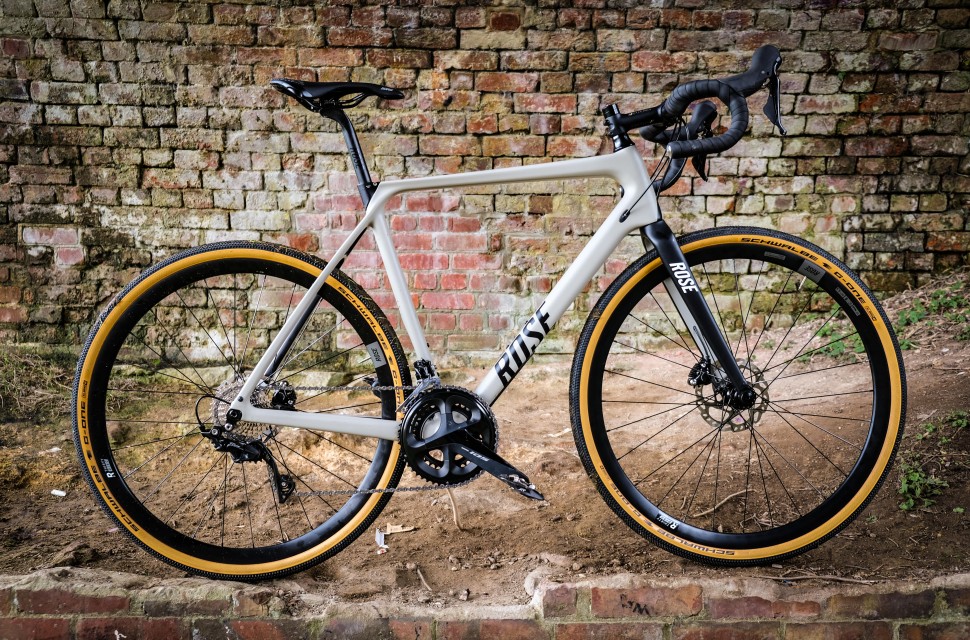 Rose has entered the growing allroad/gravel/adventure bike market with the Backroad, and this Shimano 105-equipped model offers good performance with enough versatility to chuck it into service as a commuter or touring bike when you’re not micro adventuring. The ride quality will appeal more to speed merchants than comfort seekers though.

The Backroad is right at home blasting along quiet country lanes with the excellent 38mm wide Schwalbe G-One Allround tyres providing low rolling resistance. Turn off the tarmac onto a dirt forest track or rutted byway and, providing it’s dry or at the very worst, moist, the tyres handle well with decent traction at all sorts of speeds and cornering angles. 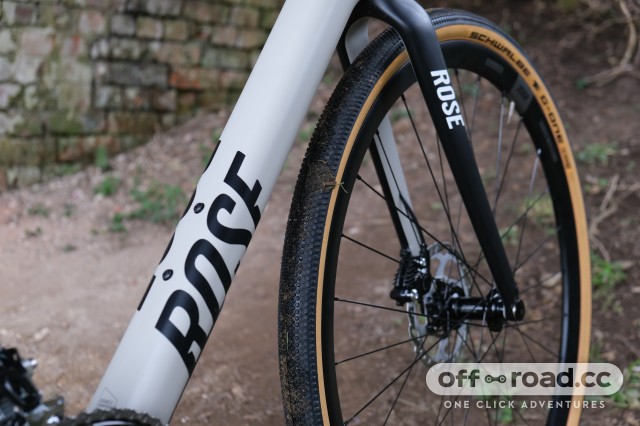 The design of the carbon frame and fork clearly places an emphasis on performance and speed over comfort. It’s not the smoothest or comfiest carbon gravel bike I’ve tested, but there is space for up to 42mm tyres so you could certainly upsize the tyres for a bit more cushioning from rocks and potholes. But if crossing swathes of open countryside at speed is your bag, then the Backroad duly delivers.

A carbon frame weighing just over a 1kg ensures that, even with a Shimano 105 groupset, this is a reasonably light bike. That means plenty of speed on the ups and when chugging against double-digit gradient climbs, where the 11-32t cassette really comes into its own. It’s a surefooted bike on technical trails with plenty of ground clearance and fast steering responses helping to keep you on the right track. 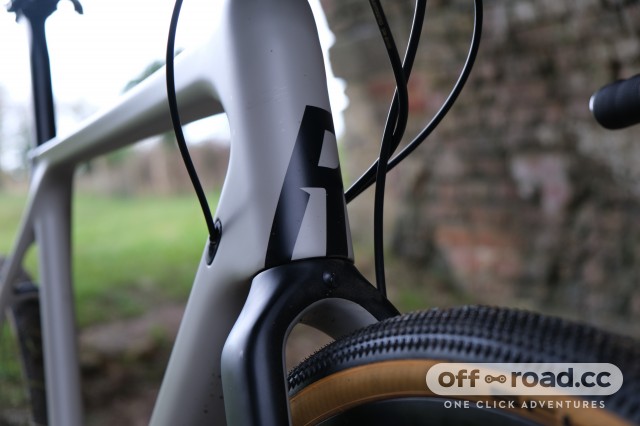 It’s a reasonably stable bike at speed but doesn’t feel as planted as some gravel bikes I’ve tested. That’s a problem compounded by the high bottom bracket which means it doesn’t feel as settled in fast corners or over loose gravel compared to more low-slung gravel bikes.

The 60mm bottom bracket drop is markedly higher than most rival gravel bikes, which on the positive does ensure massive pedal clearance in choppy terrain but at the expense of feeling a little on top of the bike. That measurement is of little surprise when you realise there’s also a cyclocross version of the Backroad, a discipline where higher bottom brackets are a benefit, but slightly hobbles the Backroad from being as capable as a more rounded gravel and allroad bike. 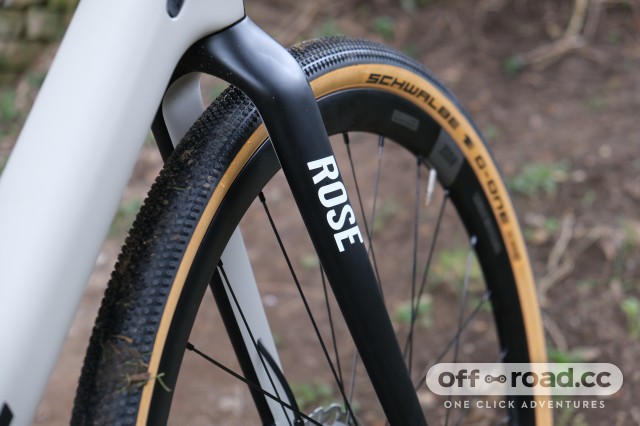 When you get into the twists and turns though, the Backroad is satisfying agile and turns easily because while the 1,024mm wheelbase and 72-degree headangle are both longer and slacker than a regular road bike, they aren’t as extreme as other gravel bikes I’ve reviewed.

There’s plenty of versatility backed into the design too, and to demonstrate it the Backroad Randonneur Ultegra model (£2,540) is packed with dynamo lights, mudguards, rear rack and Continental Grand Prix 4 Season tyres.

Equally, a second set of wheels would give you two bikes in one. A commuter on weekdays and off-road warrior at weekends.

It’s a smartly detailed carbon frame and as well as this understated sand colour there’s a teal colour option. Both are smartly set against the tan sidewalls of the G-One tyres, which despite my best efforts are still looking in good condition. 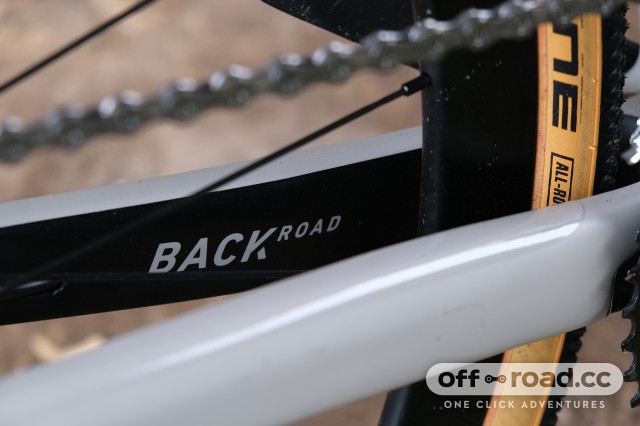 Fancy sounding 'High Modulus Aerospace Carbon Fibre T30/40, H.O.C. Technology' delivers a frame weighing a claimed 1,040g for a size 51cm and it’s matched by a full carbon fibre fork. Disc brakes via flat mount callipers and 12mm thru-axles front and rear are largely standard on road and gravel bikes these days, and all cables and hoses are routed internally. 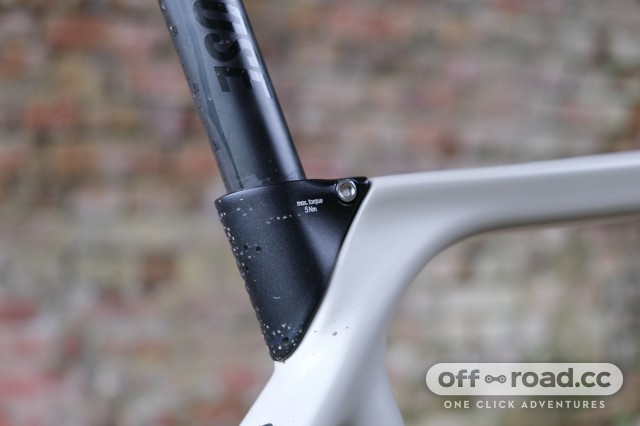 Providing the appearance of an internal clamp with the simplicity of an external design, the seat collar is unique to Rose and provides easy saddle height adjustments. It also gives a nice clean and a straight line from the seatstays that I like.

As mentioned already, there are mounts for mudguards but instead of a third bottle cage, Rose has added some carbon protecting plastic to the underside of the downtube. That’s a sensible choice if you are going to smash a carbon frame through some loose gravel.

Rose sells direct to the consumer, like Canyon, and the Backroad here is specced with Shimano 105 and costs £2,041.12, plus the £35.90 shipping costs. The range also includes mechanical and electronic Ultegra, SRAM Force 1x and Force eTap AXS. 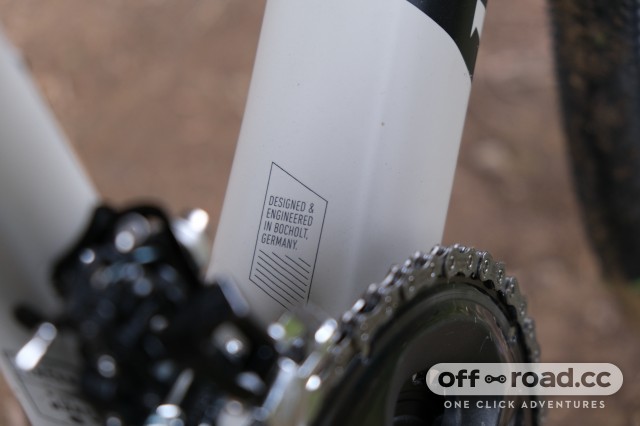 Interestingly, you can get the Backroad Cross, same frame, fork and groupset but DT Swiss P1750 Spline wheels with cyclocross-ready Schwalbe X-One 33mm tyres for £1,995.74, which is a bit cheaper than the model I tested. If you’ve already got a spare set of suitable gravel tyres this option would save you a few quid. 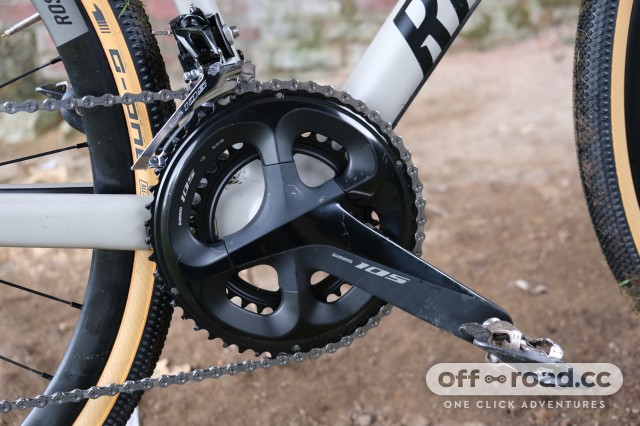 To go 1x or 2x on a gravel bike? It’s an argument that will rattle on for years, and there’s no right or wrong, it’s down to personal preference. Rose offers that choice, there’s an SRAM Force model if you don’t want a front mech, but the Shimano 105 2x groupset here with a compact 50/34 chainset and 11-32t cassette strikes a really good price and it’s ideally suited to the fast road and dirt track riding the Backroad is so good at.

The shifting quality of 105 is flawless and the hydraulic disc brakes are impressively powerful with huge control - single finger braking from the hoods is one of the best things about disc brakes. Durability, as evidenced on this test bike and countless other 105-equipped bikes, has been just fine. 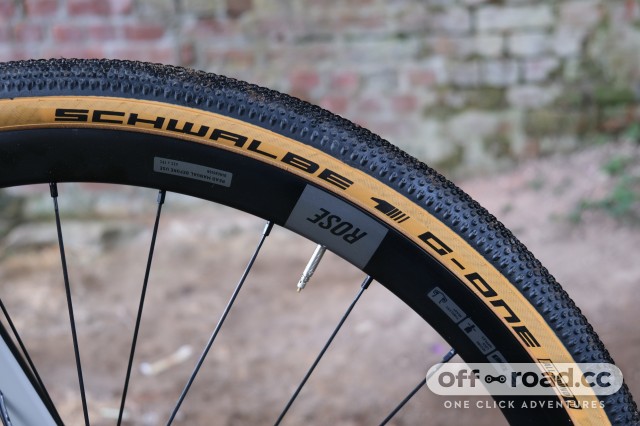 The Schwalbe G-One Allround 38mm tyre is a common sight on a lot of gravel and all-road bikes and the 'Classic-Skin' sidewalls as the German company calls it, or tan sidewalls in our world is a great look. Not so great is the fact these tyres aren’t tubeless-ready so you’re unfortunately looking at a new set of tyres if you sensibly want to go tubeless. A real shame and an own goal by Rose because the regular black sidewall version of this tyre is tubeless.

Rose’s own RC-170 Carbon seatpost has a design that is said to provide a bit of extra seated comfort, but it doesn’t feel as effective as other seatposts designed to provide flex.

The Selle Italia Novus Flow saddle wasn’t to my taste so it got changed after the first ride. I did like the shape of the Ritchey WCS Evomax handlebar, a good spec choice by Rose.

The 12-degree flared drops give your forearms more clearance on the drops and boosts comfort and control on the descents. You can read a review of them here.

Rose’s own R Thirty Disc wheels have a 30mm deep aluminium rim with a 19mm internal width and 28 spokes per wheel, laced to aluminium hubs with CenterLock disc brake rotor mounts. They’re also tubeless-ready which we’d consider imperative for off-road riding and worth the faff of installation.

Due to Rose’s direct-sales business model you’re getting really good value. Of comparable value, on paper at least, is the Canyon Grail CF SL 7.0 (£1,999) which also has a Shimano 105 groupset and good finishing equipment, but there’s the divisive double-decker handlebar which isn’t to everyone’s taste. 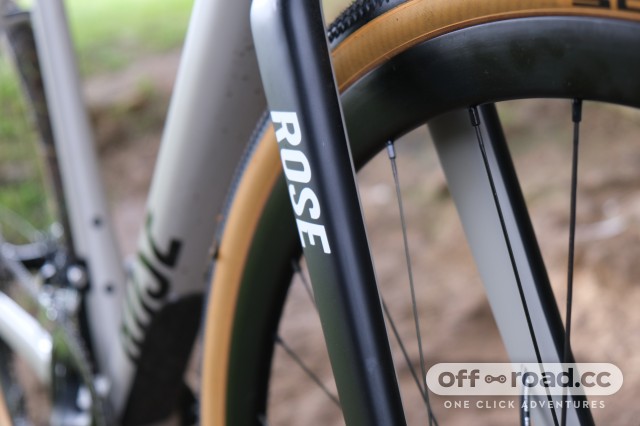 Undercutting both by swapping from carbon to aluminium is the Nukeproof Digger Pro, which adds a bit more gnar with a dropper post, stubby stem and wide handlebar, and uses SRAM’s Rival 1x groupset with hydro brakes.

The Rose will suit someone seeking a fast companion for road, lanes and dirt trail riding with enough versatility that it can be used for commuting or touring/adventure riding. The performance is commendable and it’s more than competent at bridging from tarmac to dirt but it favours the former.

A gravel bike is suited for gravel grinding and allows you to ride everywhere a classic road bike would have its difficulties. Therefore, the BACKROAD GRAVEL features the 38 mm wide G-ONE Allround Evo tyres by Schwalbe, impressing with extremely low rolling resistance and a Classic Skin look. For additional comfort, the gravel bike accommodates tyres with a maximum width of 42 mm. The combination with lightweight, robust ROSE R Thirty Disc wheels promises speed and comfort on any gravel path. The ROSE RC-170 Flex carbon seat post skilfully absorbs unpleasant shocks; the Ritchey WCS Evomax bar provides freedom of forearm movement and greater leverage when in the drops. True to ROSE's philosophy, you can choose between different groupsets: Shimano Ultegra and Ultegra Di2, SRAM Force or Shimano 105.

Tell us some more about the tyres. Did they work well in the conditions you encountered? Would you change the tyres? If so, what:

Great tread pattern but not tubeless-ready

It's a competent bike on tarmac and off-road trails, but the ride is a bit firm and the bottom bracket a touch high, but it's versatile and great value for money
Bikes