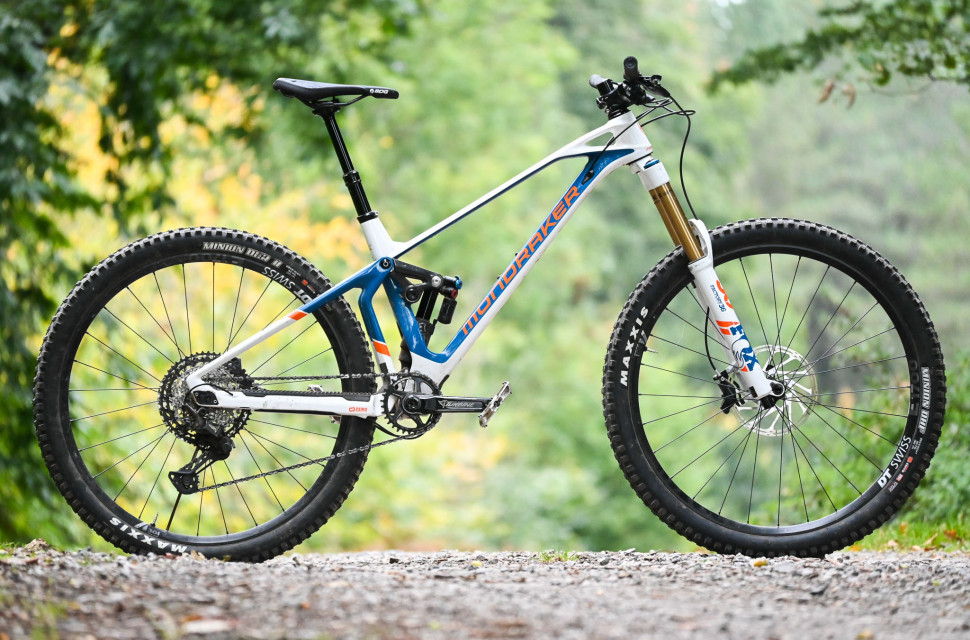 Mondraker's SuperFoxy Carbon R offers big wheel, big travel thrills in an impressively lightweight and capable enduro package that's no slouch when it comes to pedalling either. However, a relatively slack seat angle makes itself known on climbs and the kit is functional rather than flash for this sort of cash.

The SuperFoxy is a pumped-up version of the Foxy 29, sharing the same front triangle but a sporting a longer travel 170mm fork and new linkages and swingarm at the rear that change both quantity and quality of travel. There's now 160mm of bounce from the multi-link Zero suspension, with less anti-squat for more supple action and a much more progressive rate that makes it possible to run a coil shock, as some models in the lineup do.

As ever, the full carbon fibre frame is a lovely bit of work, with a flattened top tube that braces elegantly against the headtube. There's now also a full carbon fibre upper rocker link and the chunky back end now has Super Boost spacing for an even stiffer and stronger rear wheel. 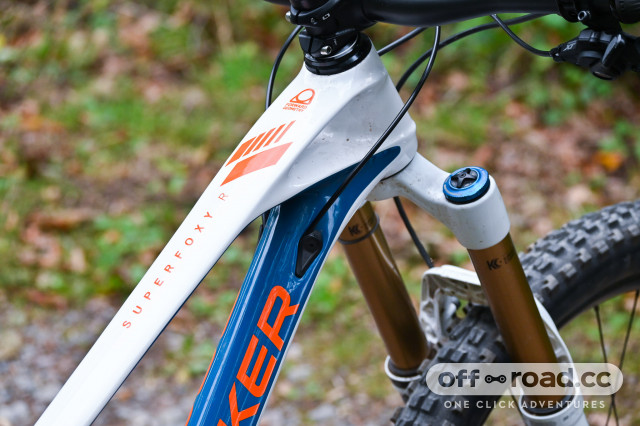 This Carbon R model is, despite the price tag, the entry bike to the carbon-framed lineup, though there are more affordable aluminium framed options. While it's hard to call this build great value relative to direct sales competitors, all the kit fitted to it is totally solid and the all-in weight of 14.6kg for a medium is pretty respectable too. 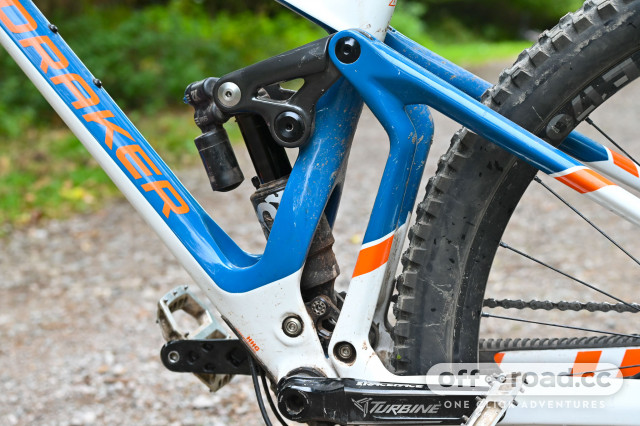 Fox provides the suspension, with a 36 Float fork that gets the four-way adjustable GRIP2 damper and golden Kashima coating. It's stiff, supple and well-controlled, though incoming 2021 models will get a stouter Fox 38. 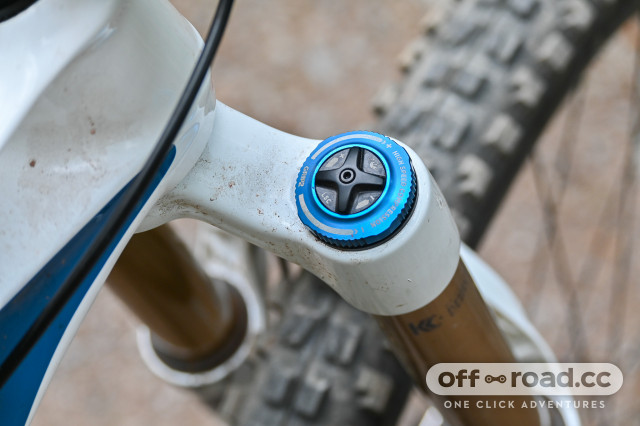 At the back of the bike, there's an air-sprung Float X2 shock rather than the coil-sprung version the top model gets. In my opinion, that's probably a good thing for most riders that don't want to mess about swapping different weight coils, though those after totally consistent performance on brutally long and rough descents might disagree. I doubt most UK riders will find it a problem, however. 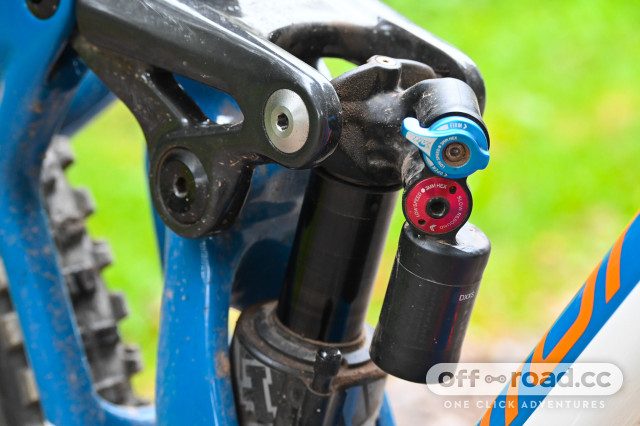 The shock works well with the bike's kinematic, offering very supple small bump performance and really impressive back end grip. The addition of the climb switch on the shock was welcome too; it made a useful difference on flatter trails and climbs to tame the bit of bob that inevitably comes with lower anti-squat figures. It's a good compromise for being able to give top tier performance on the downs without killing you on the climb back up. 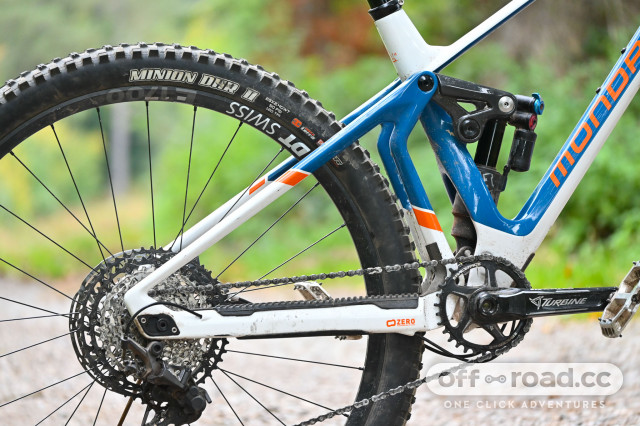 The X2 shock is actually very linear for an air unit, so it works well with the progressive back end; I took out all of the volume spacers that came installed from the factory but heavier and harder riders will still appreciate being able to fine-tune the bottom out response, something that is not as easily done with a coil unit. 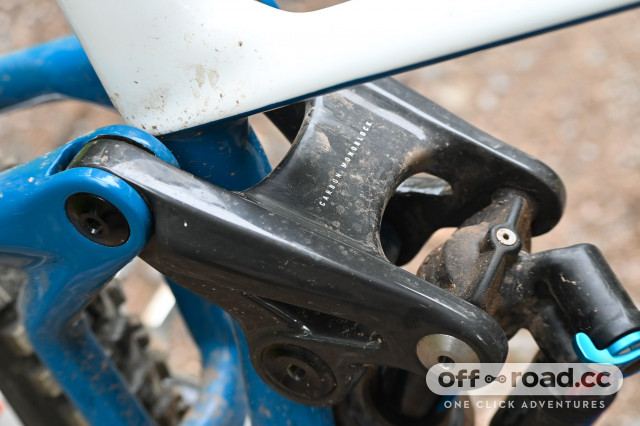 Mondraker has led the pack for many years when it comes to its long reach, short stem Forward Geometry system, which offers super stable handling without any drawbacks in terms of sluggish handling. It's taken many brands a long time to catch up - and a lot still haven't - but compared to more progressive bikes from the likes of Whyte, Yeti and Privateer it's starting to look a little dated, especially when it comes to seat angle. 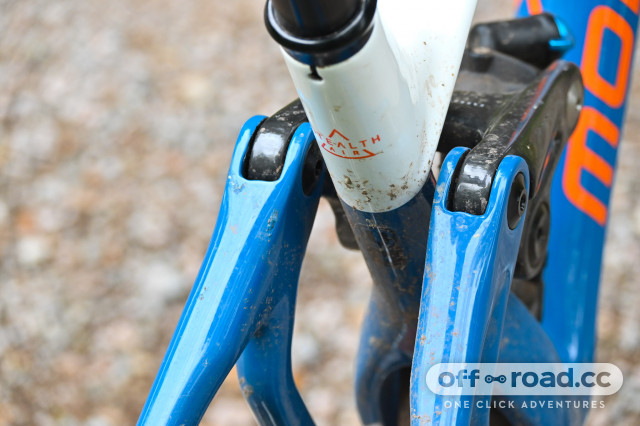 Part of the problem is that this bike is a bit of a hybrid, rather than a ground-up design. Using the front triangle from the Foxy 29 means Mondraker doesn't have to create all-new expensive moulds, but it's led to some compromises. The first is that the head angle of 65° is achieved with the adjustable headset cups in the slackest setting despite the fork being 10mm longer than before. It's not steep, but it's certainly not super slack for a 170mm enduro machine.

Sticking a bigger fork in the frame also gives a knock-on effect of raising the bottom bracket up to around 358mm, some 8mm more than the (shorter travel) Foxy 29. It's not stupidly high for a 160mm bike (Specialized's Enduro is 354mm), but it's certainly not slammed either.

That's all understandable from the point of hot-rodding the bike into an enduro heavy hitter, but some elements of the basic Forward Geometry of the Foxy 29 - with which the SuperFoxy shares reach figures and seat angle with - are starting to look a little dated compared to the more progressive end of the spectrum; even when you disregard the likes of Pole and Geometron.

While the reach on the medium frame isn't tiny at 470mm - it's still longer than most brand's large frames - the seat angle is a bit more of an issue.

It's not hugely steep by modern standards at 75.5°, but that's compounded by the fact it's quite heavily offset with an actual seat angle figure of 70.5°. That means that it gets much, much slacker than stated as you increase the post height, something that will make itself known as a very rearward weight bias for taller riders on larger frames. 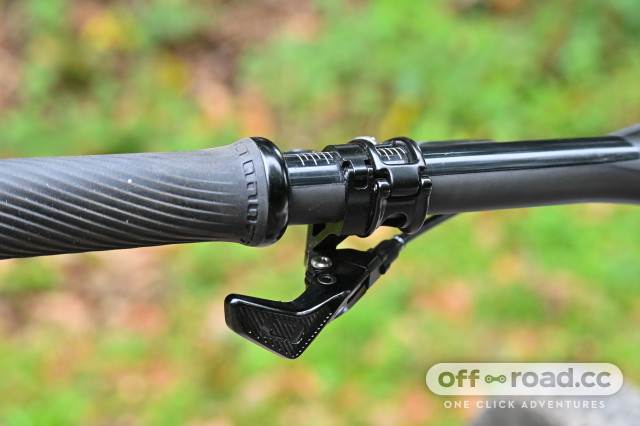 Even riding the medium, I found myself having to fold up quite a bit to keep the front end down on steep climbs; something not helped by the fact a 29" wheel and 170mm fork make the front higher than on a smaller wheeled or shorter travel bike. It's worth noting that you can adjust the chainstay length from 440mm to 450mm in 5mm increments using chips in the dropout; I kept them as short as possible, but it'd be well worth stretching the back end out on the larger sizes to counteract lift. 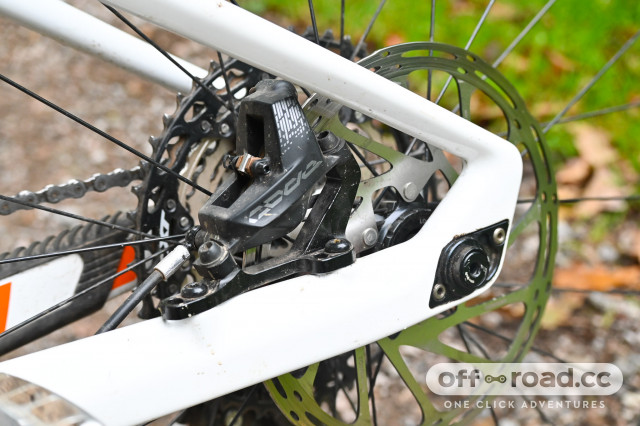 All this criticism is rather harsh considering the base geometry of the bike is still miles ahead of most, but Mondraker no longer stands in a field of one when it comes to offering this, with even big names like Specialized offering very similar angles on their bikes and affordable alternatives like Privateer's 161 being much more progressive. 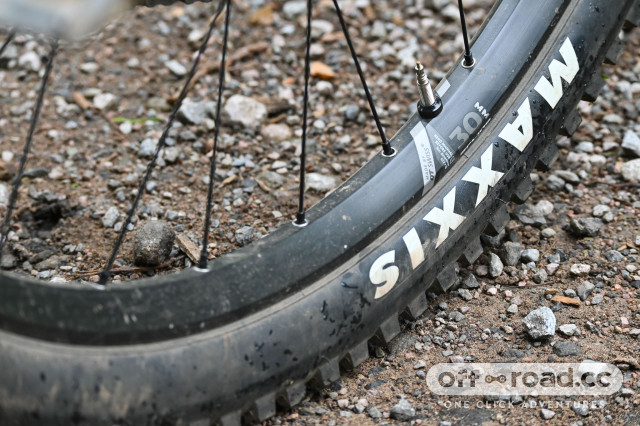 All that makes it a little harder to justify the price premium the Spanish brand has traditionally had. The SRAM Code R brakes offer loads of control and power with the 200mm rotors, the Shimano XT 12-speed drivetrain is smooth and durable and the same can be said for the DT Swiss E1700 wheelset. It's all very functional stuff that's hard to argue with on pure performance terms but it's not top drawer by any means. 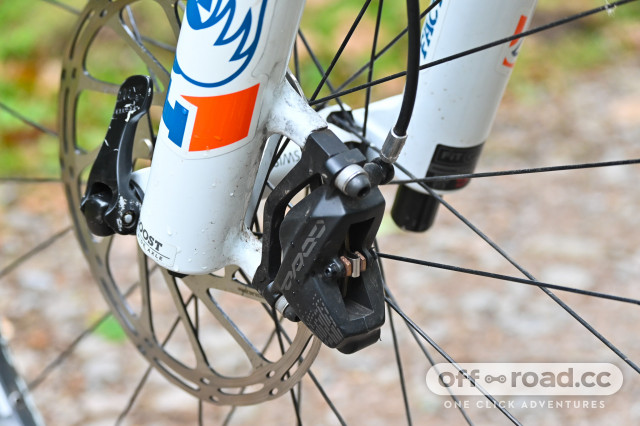 The same goes for Mondraker's own-brand finishing kit. The low-rise 780mm carbon bars are nice and wide, the dinky 35mm stem clamps them securely and the own-brand dropper post is smooth and reliable, if rather short on travel at 125mm on this medium bike. 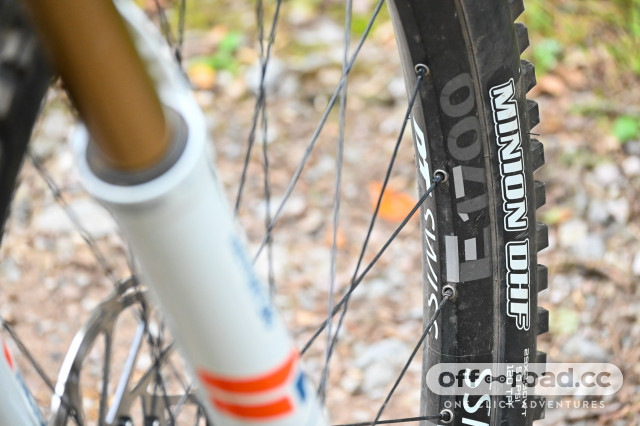 However, if you forget all that, the SuperFoxy delivers a really well-sorted ride. It's super stable when battering through fast and rock terrain - though you might want something more aggressive and tougher than the EXO+ casing Maxxis rubber at the rear if you regularly get wild in sharp rocks. 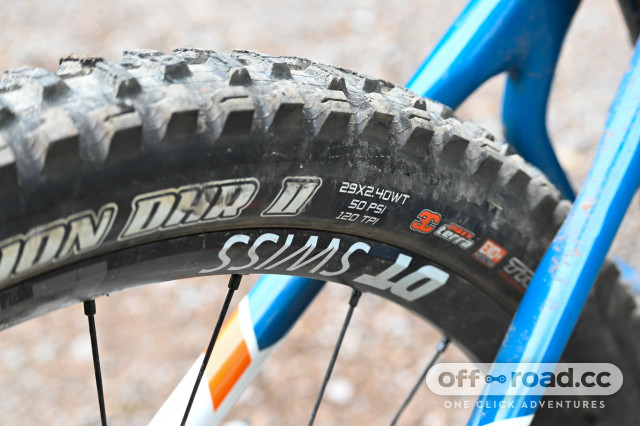 It's still no slouch when the trail gets tighter, steeper and twistier - shorter riders getting their arse buzzed on the rear tyre notwithstanding. It's here that a little bit more off the head angle might help with turn in on steep corners, but the extra reach in the bike still means that you can trust that the front end will merely push wide rather that flip you over when you start nudging up against the limits.

Mondraker's SuperFoxy might no longer be in a class of its own when it comes to geometry any more, but it still delivers a quality ride that means it can hold it's own amongst it's rivals. The suspension offers excellent, supple traction and the progression gives great support on bigger hits, especially with the adjustability of the Float X2 air shock, with the climb switch being very useful on flatter drags.

The frame is well made and well thought out too and while the kit fitted isn't quite as nice as you'd hope for the asking price - with the exception of fork and shock - there's nothing that causes any functional issues in use, with effective and reliable wheels, brakes and drivetrain.

It's just hard not to think what the brand might have done if they'd started this bike as a completely blank slate rather than adapting an existing bike, however. It would be nice to be able to adjust the head angle slacker than the stock 64° using the cup system, but the relatively slack seat angle is one area where chucking a degree or two on it would have a profound effect on the bike's climbing manners.

That said, it's possible to get some bargains on this bike as the new year models roll out,  so with a slice of the price it could be a very tempting proposition for anyone after a hard-hitting big wheeler that's still light on its toes when the trail goes up.