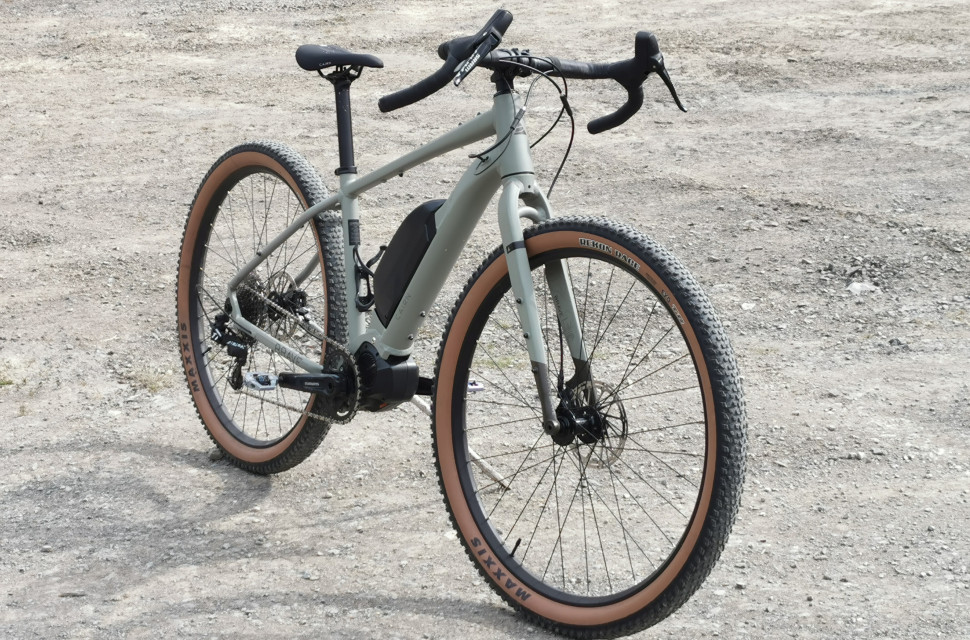 Cairn has delivered a bike that manages to not only cross between established categories but create its own with the BRAVe. The Shimano powered bike mixes the downhill ability of a mountain bike with the ability to cover ground that a gravel bike can provide. While there are some less than perfect areas, the overall package and price make it well worth a look.

The Carin BRAVe might not be the easiest bike to classify with predominantly gravel bike parts and drop handlebars matched to a mountain bike wheelset with 2.35” tyres. Cairn do also produce a flat bar version of the same bike. 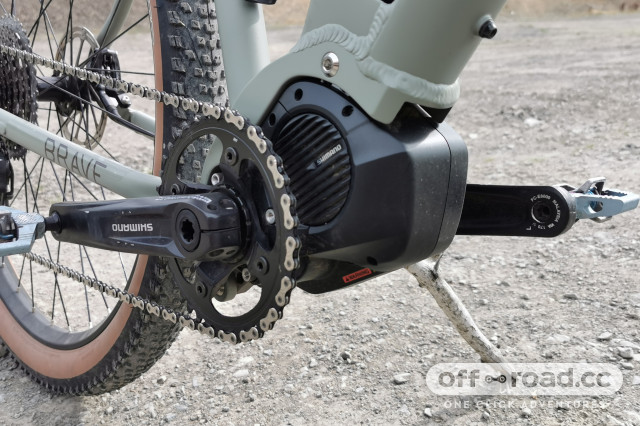 The mountain bike features are not only limited to the wheels with the geometry that is also more akin to a current mountain bike, rather than a road or gravel bike.

The BRAVe is assisted with a Shimano Steps E7000 motor, which is a motor originally designed for mountain bikes, with 60Nm torque matched to the largest battery Shimano offer for the system at 630Wh.

The frame is 6061-T6 alloy and has multiple mounting points, including 3 bottle cage mounts (2 on the size small frame), top tube bag mounts, 3-bolt anything cage mounts on the fork and mudguard mounts front and rear. 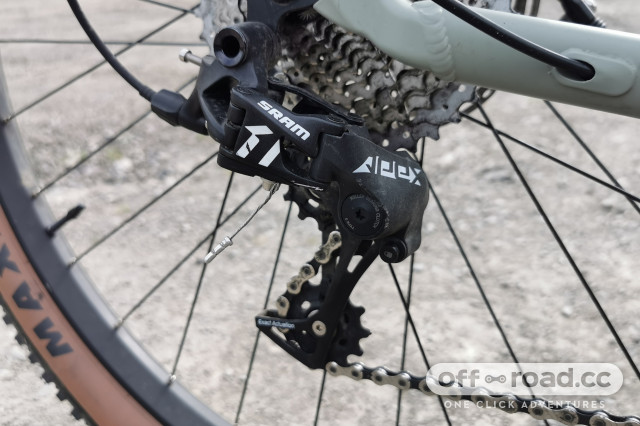 A SRAM Apex 1 drivetrain with 38 tooth chainring and Sunrace 11-42 taking care of shifting with the wheels being BOOST spacing with a wide 30mm alloy rim and Maxxis Rekon Race 2.35” EXO TR tyres.

The finishing kit includes a wide and generously swept Ritchey Beacon handlebar with a very short 60mm own brand stem, inline seatpost and saddle with the total weight of the bike, without pedals is 18.68kg.

The cross-genre nature of the bike has followed to testing, ensuring that it has covered all styles of riding from more road-based rides, through more technical, MTB inspired rides and also bikepacking.

Cairn BRAVe: How it rides 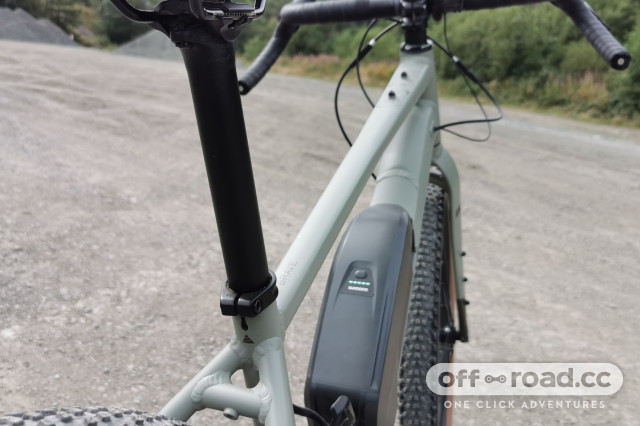 From the first ride, the riding position is something that stood out with a tall, comfortable position that gives a commanding ride and the long top tube preventing a squashed up feel. The 42cm wide bars on the medium test bike feature 36 degrees and measure 54cm at the widest point. The short 65mm drop on the bars also suits the bike with easy movement from tops to hoods and drops.

On flatter tracks, the E7000 motor assistance is effective and works well through a range of cadences with the only time that I found any issue being at very low cadences using a higher boost mode and very occasionally the response can feel a little slow. I found that while riding I attempted to adjust my natural cadence and spin faster, which helped and meant more assistance applied when required. 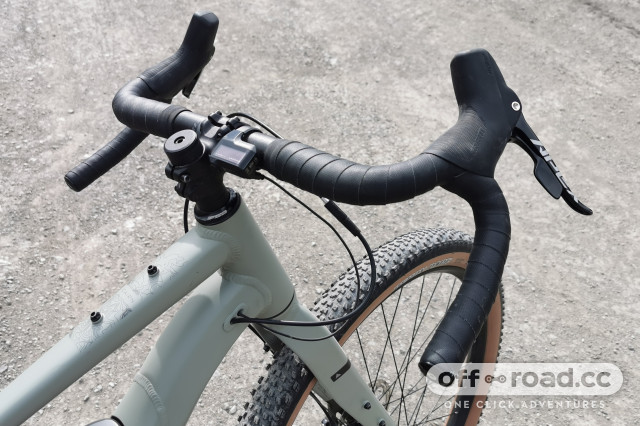 The E7000 has 3 modes, Eco, Trail and Boost, each adaptable very easily through the Shimano app. The biggest and most frustrating issue is the lack of a control switch for the motor. This is due to the motor being designed for mountain bikes, which have a different bar diameter and means the standard switch can not fit. Some companies, including Kona with the Libre EL, tested recently, have an adapter to fit one, but Cairn has kept a simpler setup, which means all adjustment is made through the very small button on the STEPS display screen. 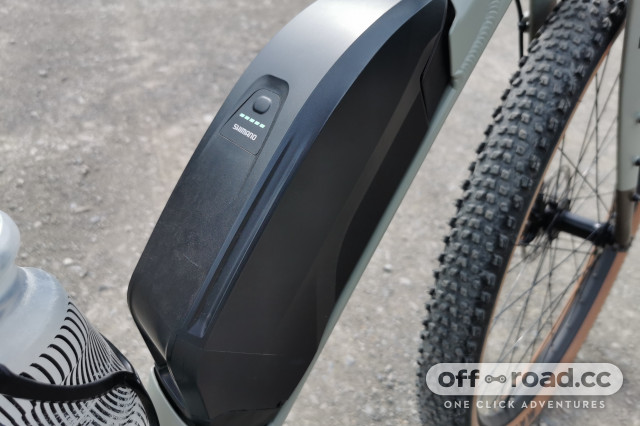 The process is far from simple as a short press cycles through the pages, and a longer press will reset the current display, such as distance travelled and means changing power modes can feel hit and miss. The modes also cycle through in order, which includes 'OFF', so if you wish to go from 'BOOST' it will mean going through an unassisted mode first. The lack of a switch may also be an attempt to keep the cost low, and it is a part that could be added after if you can find a suitable adapter, should a rider feel the need.

You can feel the 25kph assistance limit, especially on roads and flat terrain, but it is not a complete stopper. The pedalling resistance with the motor off does not feel too restrictive, with the wider Maxxis Rekon tyres likely having a bigger effect. 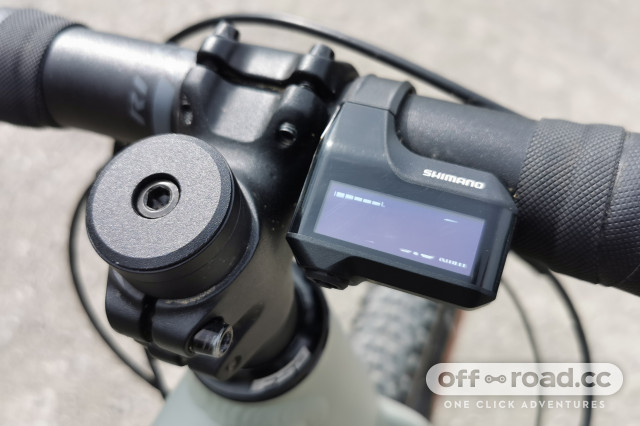 A few less positive elements are noticeable going off-road and onto rougher tracks, with the harsh fork being the standout. It is perhaps unsurprising given the wide diameter of the alloy legs, and unless you get the tyre pressure right, the comfort, or lack of it, is very much a factor.

From the first ride, I started with a reasonable 22psi within the front tyre. However, I very quickly removed air, checking later it was reduced to just 15psi. The large volume 2.35” tyres help generate some cushioning at this level, but it is still far from a magic carpet ride. Thicker bar tape would be another consideration I would suggest, and if this was my bike, I would use tyre inserts, which would reduce the risk of rolling the tyre when using at such low pressures.

With the tyre pressure adjusted, riding downhill becomes a lot of fun, taking descents and lines you normally wouldn't even consider riding on a drop-bar bike. The lack of suspension and dropper post are limiting factors. Still, this isn't a mountain bike and nor is it trying. The fun comes from simply getting down successfully, rather than any attempt at riding at speed. 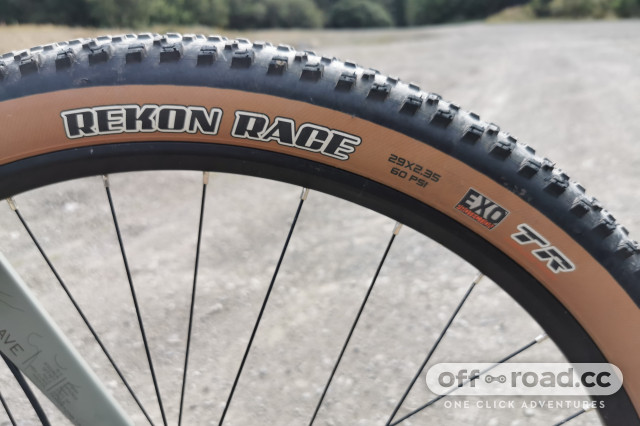 The geometry and tall-riding position help when the gradient increases. The 68-degree head angle is a number more commonly seen on modern cross-country bikes, and the Maxxis Rekon Race tyres give plenty of grip, even on steep, looser tracks. The tall riding position and short stem mean that track-stands and manoeuvrability are very good. When tackling more technical tracks, I was simply able to pause, check the line and proceed slowly in a way that really adds confidence. While a dropper seat post would likely make it even more capable, not everyone is likely to want one and will have helped keep the price lower. If you wanted to retrofit one, the spare cable port would allow an internally routed post to be fitted.

The bike we have on test is a pre-production example, so more minor aspects might change and one that I hope will is the finishing on the cables. The thinner Steps wire hangs loose, feeding into a wide internal cable routing hole with no grommet. Adding a grommet and a section of coil wrap to keep the Steps wire and gear wire together would improve aesthetics considerably. It may also help relieve the noise from the frame. The wide, open alloy frame becomes an echo chamber with any noise, such as a creaking bottom bracket or cable tapping inside that can be heard loudly. 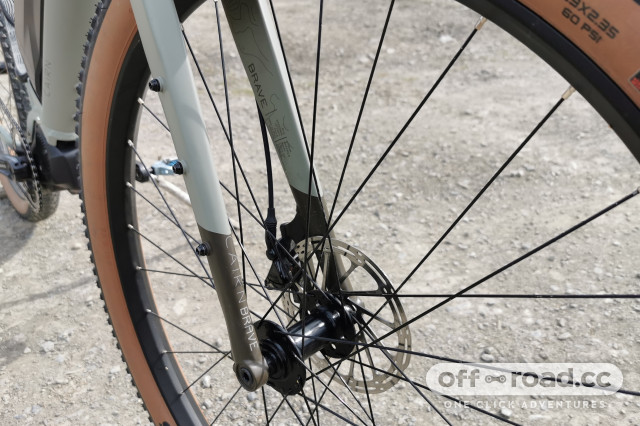 Another aspect that I hope is solely due to it being pre-production is the fork 3-bolt “anything” mounts do not line up. When I was out bikepacking with the bike, only 2 bolts secured the cages, which is obviously not ideal.

Otherwise, the bike is exceptionally well adapted for carrying loads, with the fork mounts plus bottle cage mounts on the seat tube, the underside of the down tube and the underside of the top tube. There are also mounts for mudguards front and rear, which I would recommend fitting given the amount of spray and mud that comes from large volume tyres in wet weather riding. 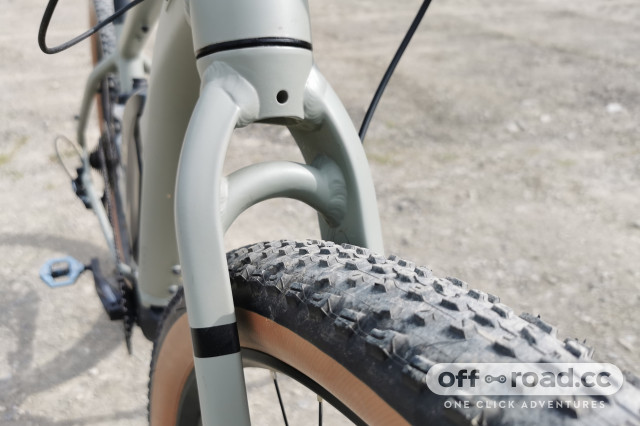 The mounts combined with the assistance and a huge 630Wh battery opens up the genuine possibility of a multi-day bikepacking bike for those looking for an e-bike and possibly trying some bikepacking.

The range will be dependant on the individual to a large extent. For example, on one overnight ride with a loaded bike, I used the BRAVe in Trail and Boost for the majority, a total distance of 69 kilometres which included 1,200 metres of elevation, much of it on steeper pitches. When kept in Eco mode, I found it was easily possible to exceed 100km, and the longest between charges was a multi-day bikepacking was 126km with 1200m of climbing and still had 2 bars remaining. 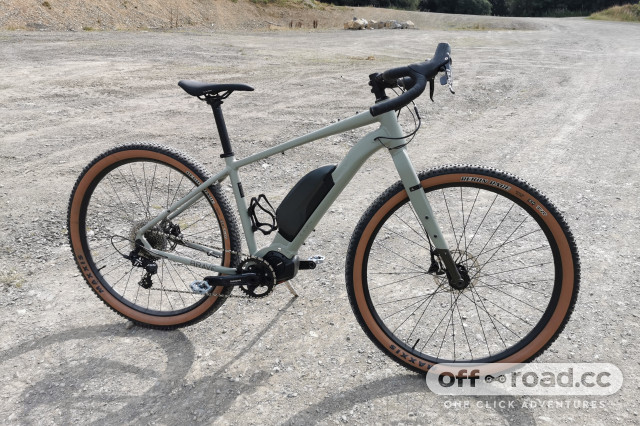 The drivetrain and finishing components fitted all work well with SRAM Apex that feels a little agricultural with the gear shift, but ultimately works and is easy to use with braking that I found powerful enough with 160mm rotors fitted to our pre-production model, but bikes will be shipped with 180mm rotors, which will give increased power and modulation.

The finishing kit is all basic, own-brand kit with the exception of the well-shaped Ritchey Beacon comp handlebar, and for this style of bike, it all works well with sensible choices, such as the inline seatpost to create a more upright, shorter reach position while riding. The wheels are also suitable and while they are heavy, the wide 30mm internal Ryde rims help give the tyres a little more support, which will be useful if you run the tyres at pressure as low as I have done. 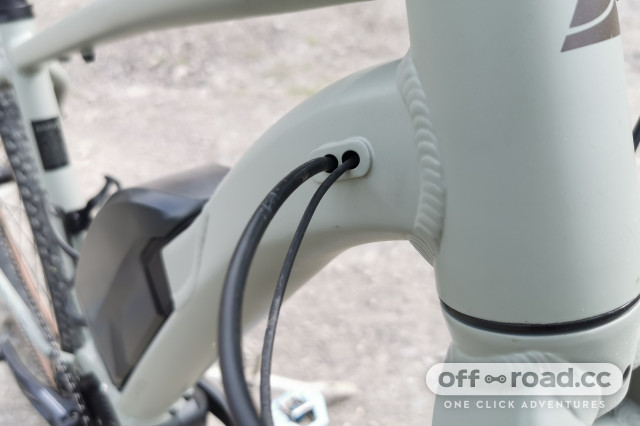 It is clear that thought has gone into what the bike is intended for, especially where it can go given motor assistance. While there are a few similar bikes without a motor, they are something of a niche product, and when I have ridden them in the past, they can feel the worst of both worlds, but when the assistance provided by the motor is factored in, it flips the scenario. The motor nullifies the issue of the slower, heavier tyres while the geometry creates a far more capable bike downhill.

There is perhaps one main question that many will see, and that is why the BRAVe over an assisted mountain bike? A mountain bike will be even more capable downhill and still able to do the limited 25kph. Still, it will lack the mounts for possible adventures, and the BRAVe will be a better option should more sedate forest, gravel and roads be more what you plan to ride. 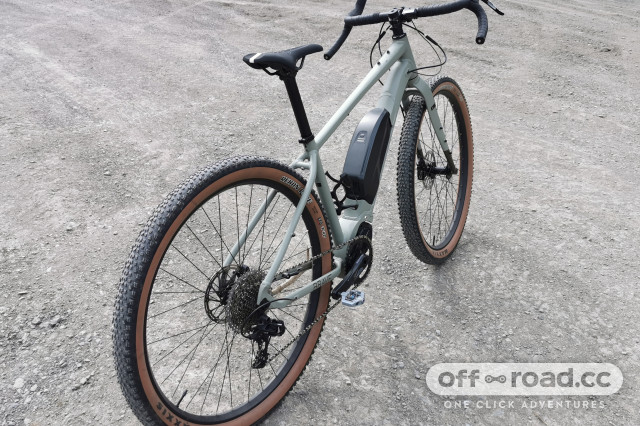 The BRAVe retails for £2,549, making it one of the cheapest bikes currently available with the E7000 motor system, especially when you factor in the large 630Wh battery capacity. The Ribble CGR Al e that Mike tested a little while ago, which now starts at £2,699, is lighter, features the MAHLE Ebikemotion, which is both less powerful and has a much smaller battery at 208.8Wh.

The Cairn BRAVe has impressed not simply with the motor and assistance on offer but more so the geometry and capabilities that the bike has. While the downtube battery would normally mean fewer mounting options, Cairn has added more and combined with the generous battery. It creates a truly possible adventure e-bike that currently at least is missing from the market. There may be a few small areas that we hope will see improvement beyond our pre-production sample, but it is fun, adaptable and far more capable than you might assume for a bike with drop handlebars and rigid forks that add up to make a standout e-bike for gravel style riding.

Reads as very much a beta version.  What on earth possessed them to spec that agricultural fork, when there is so many better choices available (like every other gravel fork ever)?  The lack of a handle bar based controller is another obvious error boosting the output whilst approaching the bottom of an offroad hill is going to be tricky.  Surely its not beyond the wit of man to get an adapter made?  Given STePs is just DI2 in disguise perhaps there's an option there?