Skip to main content
Log In Register
Bombtrack Hook EXT £2,200.00
If you aren't fussed about 11kg+, this is a great bike with all-round potential and the lifelong assurance of a steel frame

KiwiMike
|
May 22 2017
|
Overall
Quality
Performance
Value
What's good?
What's not?
Buy if...
You're not too fussed about weight and want a great go-anywhere machine

We first saw the German Bombtrack Hook EXT back in January and, as Dave Arthur said, 'we liked what we saw'. Having spent a month trying to find a trail it couldn't handle, I'm stumped. This is simply an awesome bike to take off-road.

After our initial intro on road.cc, Dave got into more detail here. As he noted, the defining feature of the Hook EXT is the 650B (27.5in) wheel size. It's becoming popular in the category of do-anything bike – the ability to rock the toughest of mountain bike trails, then either fit really fat slicks for road riding/touring, or a set of 700C wheels on normal tyres makes for as close to one-bike-to-rule-them-all as you currently get.

At over 11kg in its SRAM Rival 1X 650B-fat-tyre guise, the Hook EXT is portly by road bike standards, and the 44T chainring as tested will spin out quickly – but let's not damn with faint praise here. Understand what you can do with the Hook EXT and your horizons widen. Literally.

Since bicycles were invented there have been hardy souls pushing the limits of where you can ride one. Fatter tubeless tyres have turned bikes that were previously roadbound into perfectly capable gravel bashers, particularly bikes better suited to endurance pursuits befitting slacker head angles and longer wheelbases. At 1020mm in a medium frame size, the Hook EXT is properly stretched out and stable at any speed, on any surface. 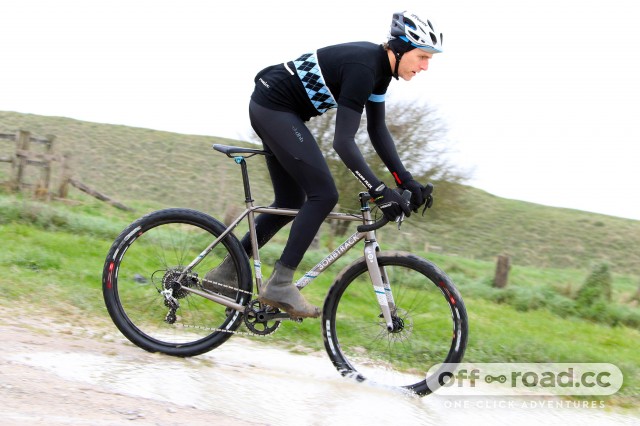 And it's on the rough stuff that this bike shines. With knobbly, wide, inner-tubed rubber underneath, any road riding will be a chore, but it makes the anticipation of hitting the trails ever-sweeter. I felt more confident on the Hook EXT than on my (admittedly ageing) full-suspension GT i-Drive, it's that good. And not even in the drops – the substantial SRAM Rival hoods provide ample grip for gloved hands, even on 20mph rocky descents, the one- or two-fingered hydraulic braking providing the reassurance that you can get out of trouble quickly.

Once back on the black stuff, those same hoods make for excellent aero handles, helping towards a not-too-shabby 20mph solo average back down the valley.

Chopping between flinty, rutted, branch-strewn chalk downhills and overgrown bridleways, the Hook EXT performed flawlessly, even on the tubed tyres running considerably harder than I'd go on a tubeless setup in order to avoid pinch flats.

The box-girder fork, 15mm thru-axle and tapered headset held everything together on warp-speed off-road descents, with the 160mm front rotor making scrubbing off speed a one-fingered affair, while the drop bar made dicing along narrow, foliage-lined tracks a blast, with far less swerving required compared with the usual 700mm-plus mountain bike flat bar.

The Hook EXT frame is defined at the chainstay bridge. Here you'll find obscene amounts of tyre clearance – Bombtrack says it's designed to take 2.2in tyres, but there's another half an inch of clearance here, a tiny bit less at the slightly narrower seatstay bridge. Looking down at the box-girder construction at either end of the chainstays welded to the massive 86mm-wide PF30 BB shell, this is clearly a bike built from the ground up to go full fat. 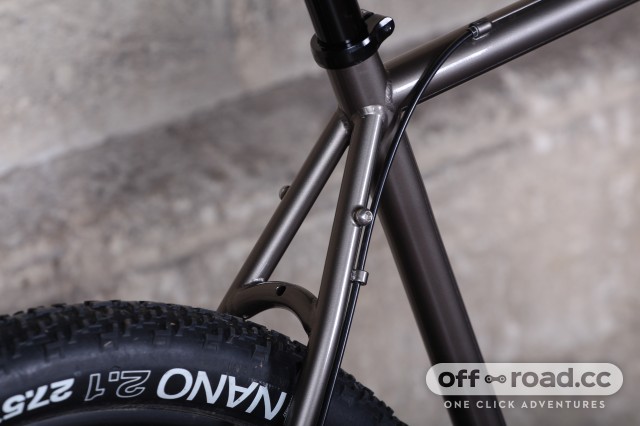 Should you be concerned about potential squeaks and creaks from the PF30 bottom bracket on a bike designed for serious off-road thrashing, Bombtrack claims 'great success' with PF30 in its steel frames, not suffering the possibility of creaking that carbon does. 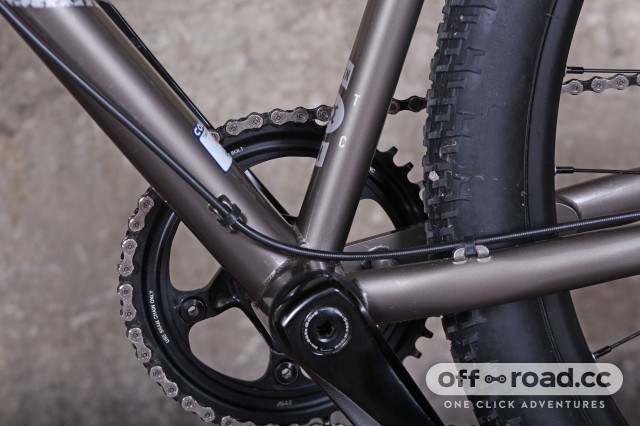 The frame is Columbus double-butted chromoly steel, finished in a gorgeous grey with a clear topcoat. The relaxed 71-degree tapered head tube keeps things tracking nicely up front, and the well-proportioned, slightly overbuilt-looking (for steel) top and down tubes maintain the solid feel of the bike.

While the down tube is generous, it's half an inch narrower than the front tyre – meaning on my first ride out I was plastered within a few minutes of hitting waterlogged bridleways. Clearly a front mudguard is a must if you want to retain your vision and a sense of decorum. 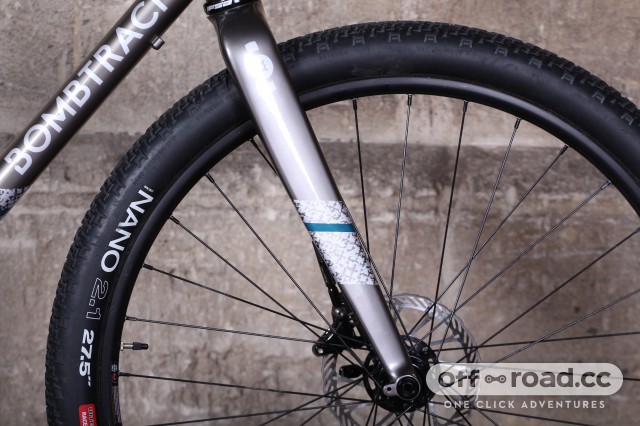 Befitting a bike designed to get seriously muddy, the seat tube slot is forwards-facing – a nice detail. At the aforementioned PF30 bottom bracket, the driveside chainstay starts out as a 6.5 x 30mm tyre-swallowing steel bar that merges into the oval chainstay heading rearwards. On the non-driveside there's a rather odd dual-cowled platform for the rear flatmount calliper to bolt to, providing just enough heel clearance for size 45 mountain bike shoes in overboots. Those with larger feet might want to test clearance first. 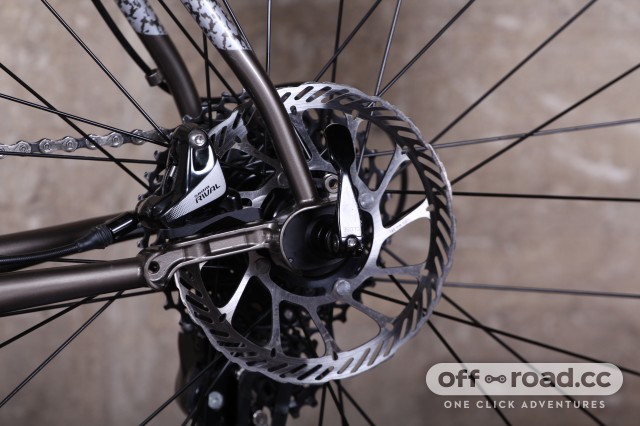 The replaceable rear dropouts are large cowled affairs to facilitate welding, each with a single rack/mudguard mount matched by a drilled seatstay bridge, chainstay bridge and an upper rack mount below the seat tube junction. Setting this bike up as a deep winter or load-carrying machine would pose no problems. The rear end is held together by a large 12mm thru-axle.

Bombtrack has steered clear of internal cable routing on the frame, simplifying trailside repairs in the middle of nowhere. Its choice of cable stops strikes me as a bit odd though – the rear mech cable is exposed along the top tube then goes into a long run down the seatstay, passing through three loose-fitting metal hoops. 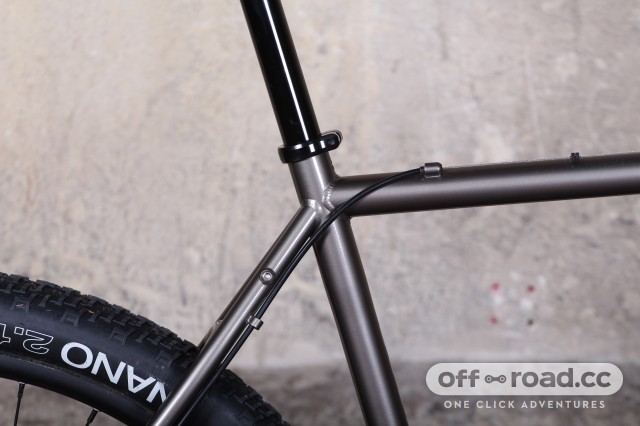 I can understand going for a solid cable lower down where mud and water are much more of an issue, but what this means is there's no chance to clear out the lower section when the inevitable happens and it becomes contaminated. The old trick of popping the whole cable free of the stops and sliding the outer sections away to then wipe down a sticking inner just won't work. 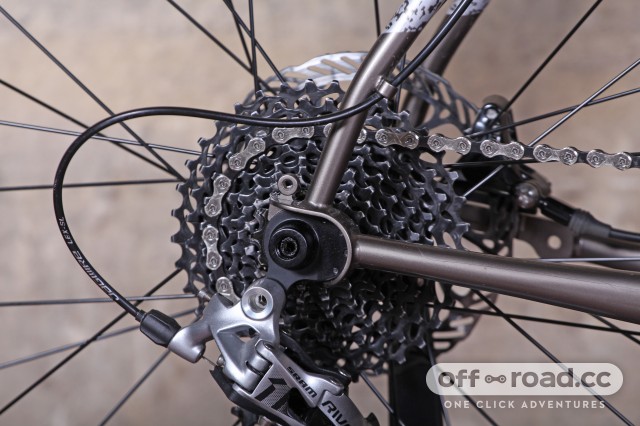 I suppose you could drill the stops out and put in a full outer cable run – it would be nice to see frame makers providing the option with wider diameter stops fitted with reducers for using naked inners.

The design has featured on previous Bombtrack bikes, and the company claims there's very little contamination gets down the cable. There's an unused cable stop on the right of the down tube for a front shift cable, and a tapped hole in the BB that would hold the plastic cable guide for a front mech. Bombtrack advises you can fit a double crankset up to 52/36, should you wish. 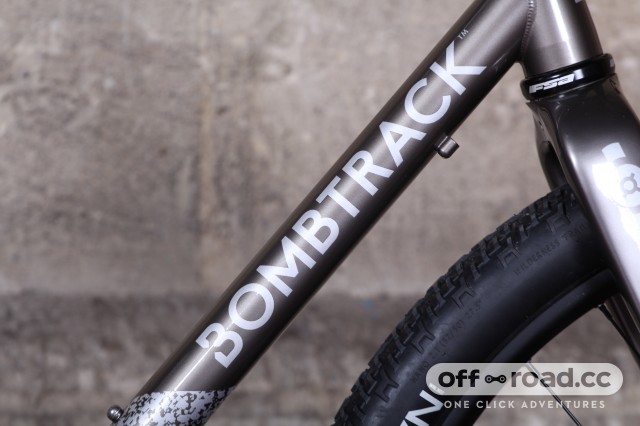 The muted paintjob and graphics are lovely, but you do need to keep an eye on the cables around the head tube, because they will scuff up the topcoat if left unguarded. 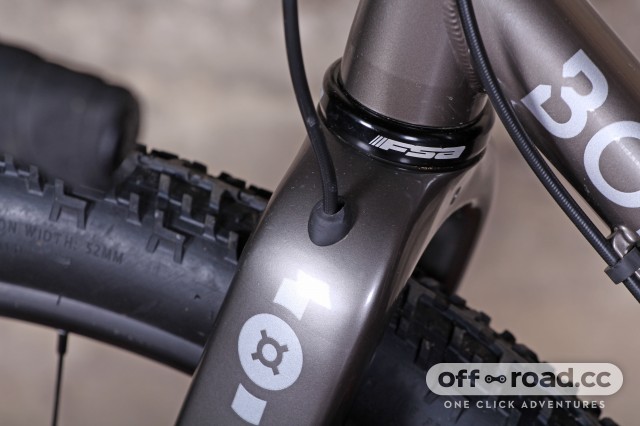 The cavernous carbon fork with its tidy internal routing, flat mount calliper and 15mm through-axle means serious off-road business – but you can fit mudguards too, courtesy of the drilled crown and dropout tabs. The steerer is alloy, as befits a bike where weight isn't the concern but crash survivability in remote areas is. As for the frame, the fork is defined by clearance – there's a whopping 3in of space at the crown, surely enough for pretty much any rubber you'd think of fitting.

Bolted to the top of the fork are the Bombtrack-branded stem and bar, the latter with a 10-degree flare at the drops to widen the grip when off-road and offer more varied hand positions. It's quite wide on the tops – not a full-on aero tabletop but certainly nice and broad to help spread the load and minimise pressure on rough roads. The flare does mean that the SRAM levers are the outermost part of the bike, so careful leaning on that coffee-stop wall... 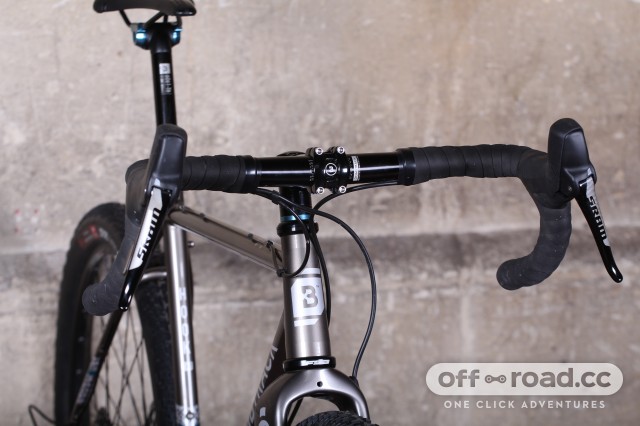 Other items of note are the supplied 2.1in WTB Nano tyres, which, annoyingly, aren't tubeless-ready, unlike the matching WTB rims. With excellent off-road capability this is a bike crying out for tubeless, and would be the first upgrade I'd make. During the review process I fitted a set of tubeless Maxxis Re-Fuse 2in slick tyres to get a feel for how the Hook EXT handled on faster-rolling, more gravel-road mix orientated rubber, and found that, at the lower pressures possible, comfort and grip were almost on par with the WTB Nanos on Hampshire's varied chalk downland bridleways. Bombtrack says you can go up to a 45mm 700C size tyre, but I didn't have a matching set of 700C wheels to swap in to try.

I just couldn't get to be friends with the Selle San Marco Squadra Startup saddle, but hey – saddles are personal and after swapping to my beloved Charge Spoon I couldn't complain.

The rather excellent SRAM Rival 1X groupset was well liked by Dave on its release. Here in its 44T chainring, 11-36 cassette guise I feel it's a tad overgeared for off-road use in hilly areas, offering 33-108 gear-inches to be precise. This is akin to pushing a compact chainset, 700C-wheeled bike on 28mm road tyres up a hill in the small chainring and 29T sprocket. Once you get steeper than 7-8 per cent that's going to see many riders out of the saddle – not an ideal climbing position off-road where you want to keep weight as rearward as possible for the best traction. 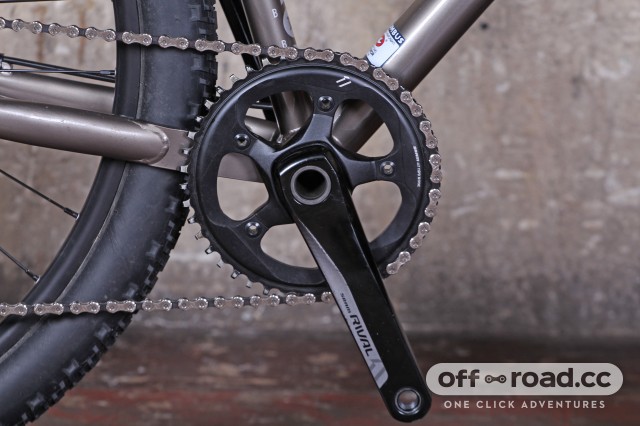 It's fine for short bursts, but prolonged climbs with short, steep or technical pitches won't be welcomed towards the glycogen-depleted end of decent days out. There's nothing stopping you swapping out the 44T for a 38, or going for the SRAM 11-42 cassette to make things more enjoyable without compromising top-end speed.

As Dave noted in his review, the combination of alternating tooth profiles on the chainring/jockey wheels plus rear mech clutch meant in hundreds of miles of bouncy, rutted riding the chain never once skipped let alone came off, and chainslap was literally unheard of. I quickly re-learnt SRAM's Double Tap shifting, and after a tweak of the paddle position was happily shifting away through the mud and grime through double layers of glove.

I'd previously ridden up to 40mm tyres on gravel/cyclo-cross bikes and thought I was having 'fun'. The Bombtrack Hook EXT takes 'fun', adds ride-anything confidence and barrels you down bits of bridleway and rutted farm track at speeds that will see you leaving bemused and abashed mountain bikers in your wake.

If you aren't fussed about 11kg+, this is a great bike with all-round potential and the lifelong assurance of a steel frame