Skip to main content
Log In Register
Bergamont Grandurance 6 review £1,350.00
A great value all-rounder that is hard to fault 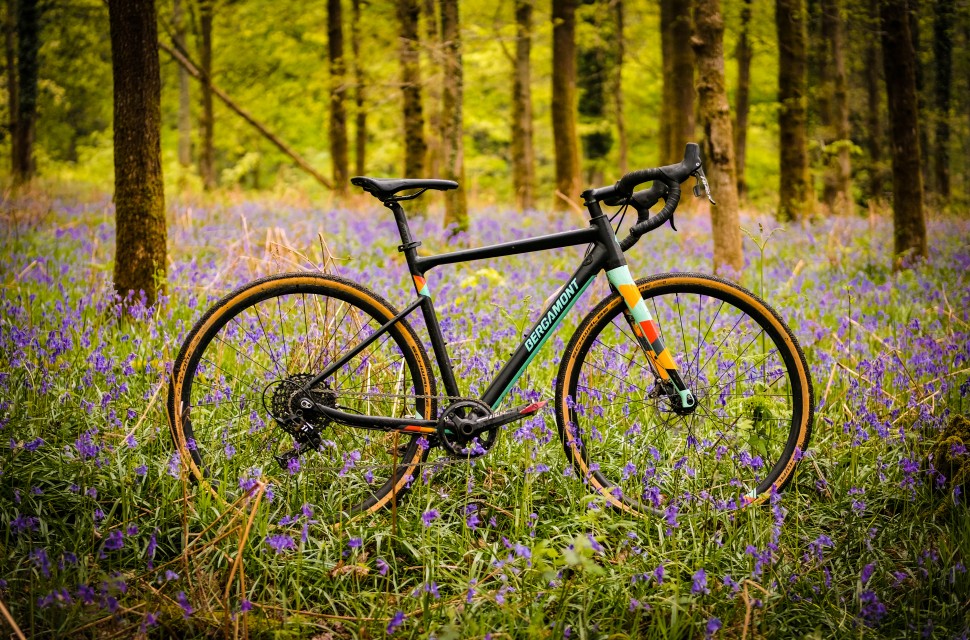 Rachael Wight
|
May 10 2019
|
Overall
Quality
Performance
Value
What's good?
What's not?
Buy if...
You want a proper all rounder fitted with some great spec choices

The Bergamont Grandurance 6 is a well equipped aluminium gravel bike or ‘all-road’ bike. It’s decent value and has got a striking paint job, if not paired with the most progressive geometry. This is a classic endurance road bike with allowances for gravel tyres, mudguards and racks but for the price, I think it’ll make any owner a great weekend gravel adventure bike that will commute with ease on the weekdays too.

The alloy framed Bergamont Grandurance 6 is a middle of the range bike in a five bike lineup. Although that's really a three bike model line as two of the five are equipped with racks and mudguards making them aimed at commuters and tourer rather than gravel and endurance fans as the 'all-road' Grandurance 5, 6 and Elite are targeted at. 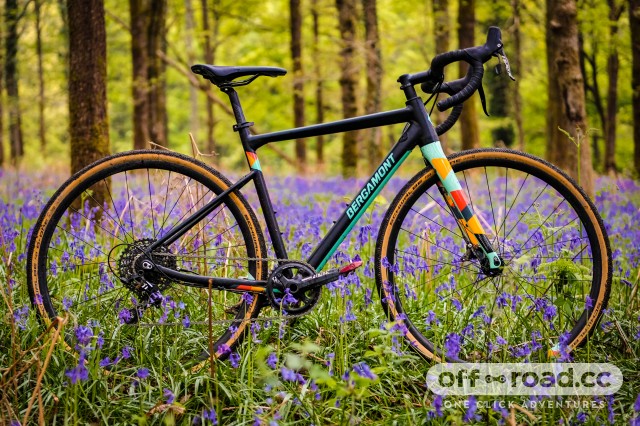 The Grandurance 6 that we have here costs £1,349 and for that you get an alloy frame with a carbon fork. The frame features internal cable routing (fork aside) with space for an internally routed dropper post too. Elsewhere there are cleverly hidden mounts for mudguards, and although our bike didn’t come with one (your's will) there is a small front mounted fender which is recessed neatly up into the fork. Inside the frame, there are bottle bosses for two water bottles and plenty of room for bikepacking bags. 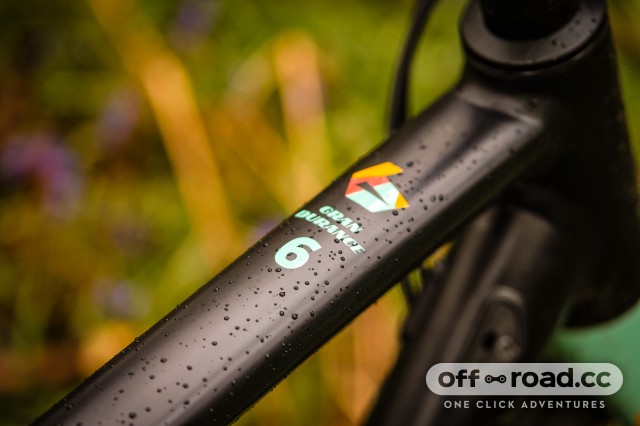 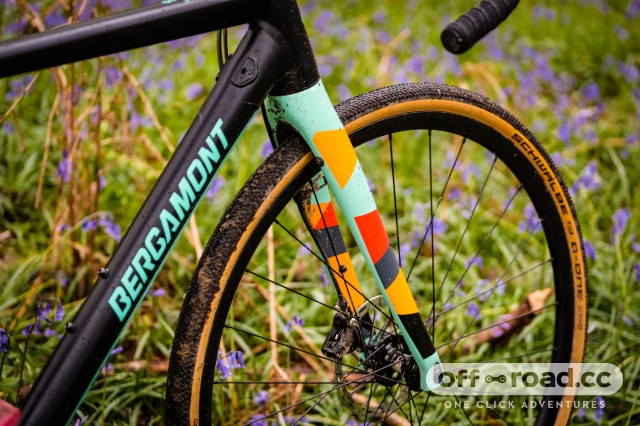 The fork is carbon with carbon steerer too and a thru axle (12x100mm) up front matching the 12 x 142mm thru axel you’ll find at the rear. I really like the way the head tube shape flows neatly into the fork, and whilst we are talking about the fork, I’m a huge fan of the colourway, it’s striking and suits the tan wall tyres, of which I’m also a supporter. 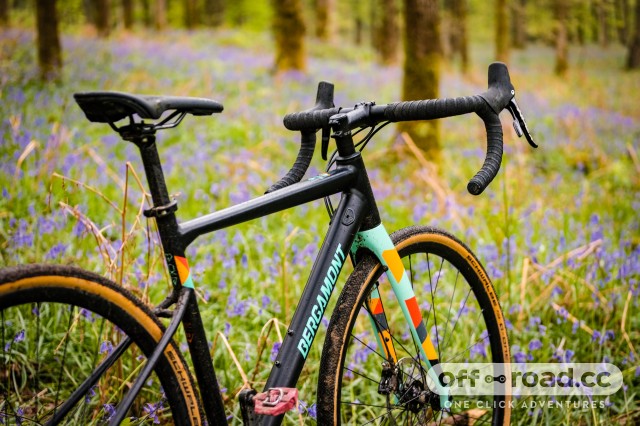 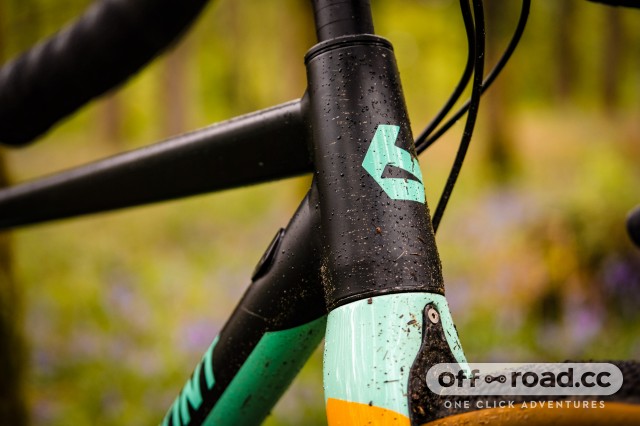 The bikes sports some pretty good kit, I'm talking a full SRAM Apex 1 groupset and with the £1,349 price tag, that’s pretty good going. You’ll struggle to get a single ring bike this cheap with hydro brakes, although Canyon’s Grail 7.0 SL is tempting, that’s a carbon bike with 1x Rival groupset for £1,449. Other options include the 2x Giant Anyroad 1, the Boardman ADV 8.9 or there’s the Whyte Glencoe but that only has an alloy fork. There is the option of a Ribble CGR AL but that’s got 650B wheels, making the Beragmont look like it’s filling a gap other brands have missed at a decent price. 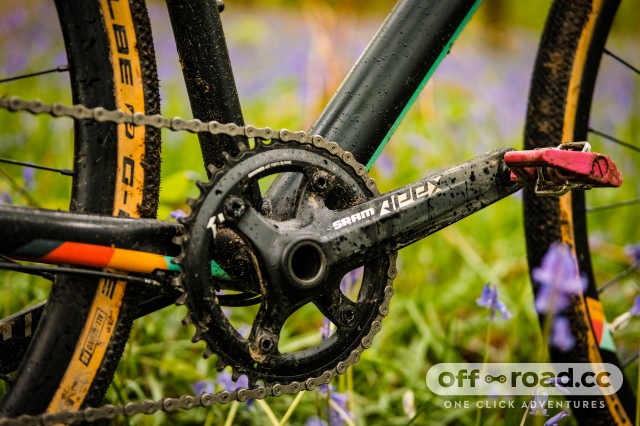 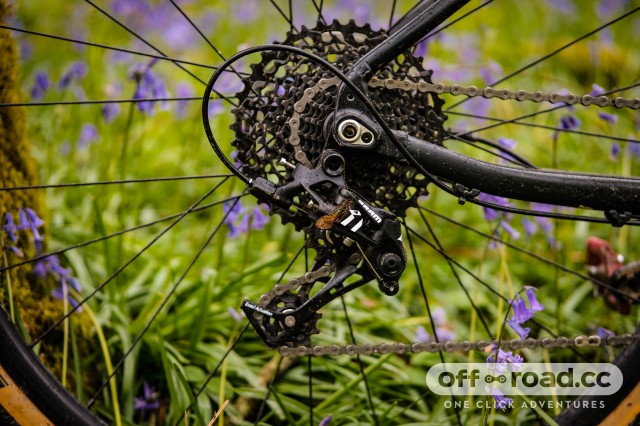 As alluded to, the drivetrain is a 1x affair, aiming the bike squarely at those that want an all-road bike to spend a majority of their time off-road rather than on it. There’s a 42t chainring paired with an 11-42T cassette, it might be the bottom of the range SRAM gravel gear but it looks good and has worked faultlessly and quietly throughout the test and a clutch mech is a welcome feature over rough ground. 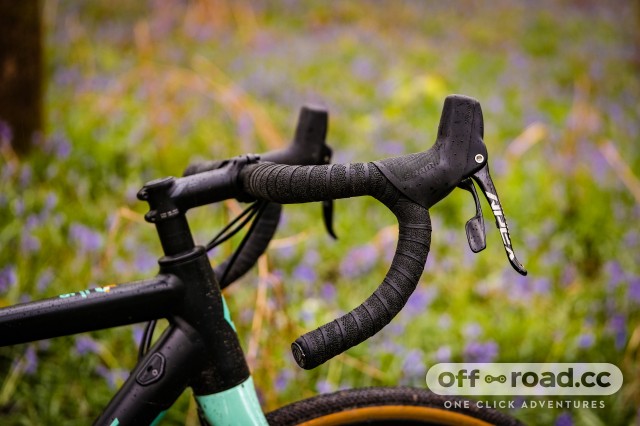 The 700c wheels specced are Mavic Allroad's with hubs from the same brand, the rims measure up with a 22mm internal width onto which are mounted 35c Schwalbe G-One Allround tyres. Bergamont says there is clearance for 700x37c if you fancy something wider. The tyres roll well on road and are a great width for dispelling the bumps of the rough roads around the UK. They will give you grip on dry gravel tracks and fire roads but add mud to the mix and you’ll need to change them out for something a tad grippier like a, WTB Cross Boss, that’s a much better tyre for mud and is 35c wide. 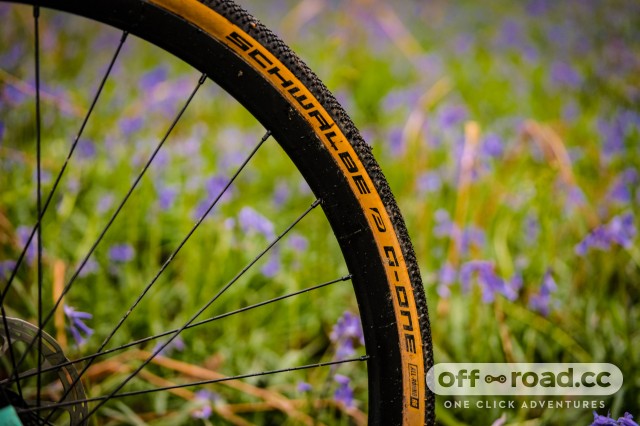 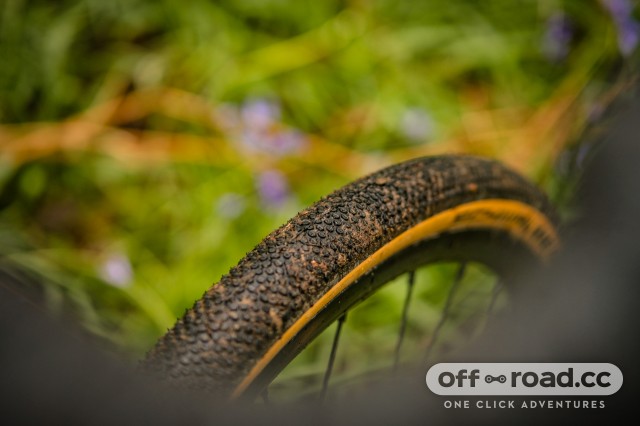 These Bergamont bikes come from the same stable as Scott bikes so there’s a Syncros Creston bar, a handlebar with a 10 degree flare I really liked on the Scott Contessa Speedster Gravel I reviewed recently. The top of the drop bars curve backwards slightly to bring the hoods closer to the hands which along with some great bar tap was super comfy. The seatpost, saddle and 90mm stem are all Syncros parts too with the seatpost getting a quick release clamp for hasty adjustments on the trail. 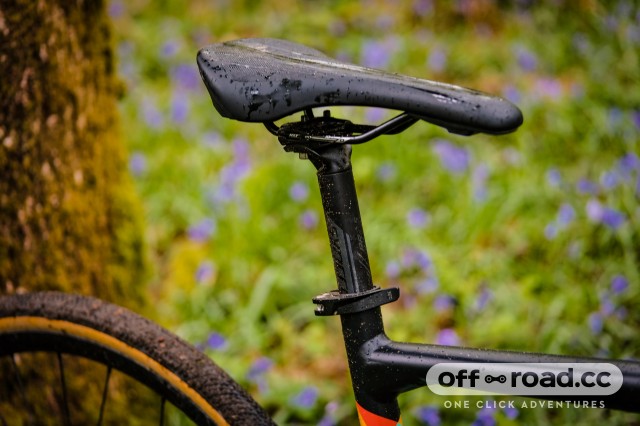 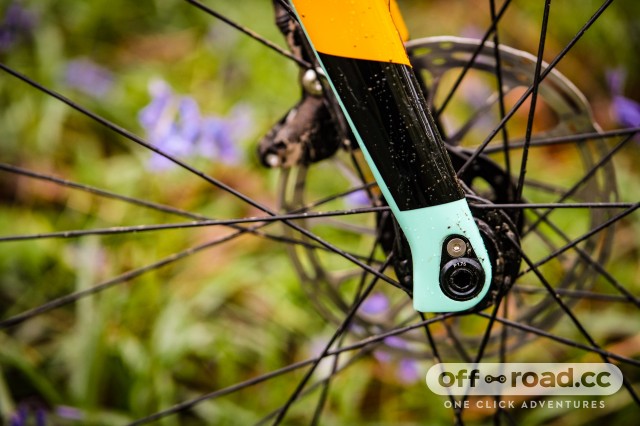 The geometry is fairly standard for bikes in this 'all-road' category. There's a 71.5 degree head angle on our 53cm test frame which gets steeper as the bikes size up. Our bike gets a 74 degree seat tube angle, which again gets slacker as the bikes increase in size, not dissimilar to other brands of bikes. This bike as has a 530mm top tube, a 510mm seat tube, a 135mm head tube and 425mm chainstays. 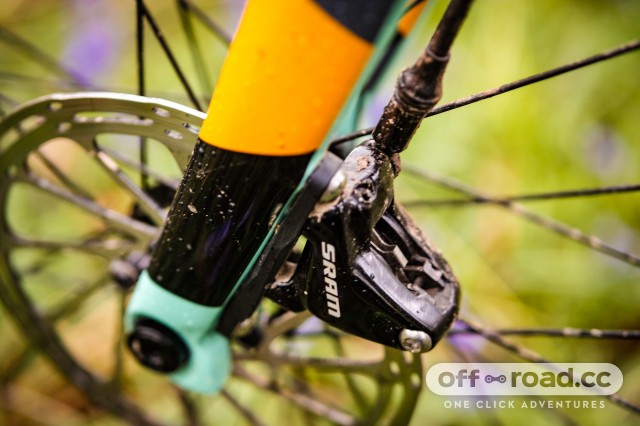 Riding the Bergamont Grandurance I get exactly the kind of feeling I expect to get from an all-road bike, it’s capable, tough and will happily turn a wheel to most situations. It is a myriad of contradictions, the tyres are really built for the road or at least dry fire roads, the position isn’t particularly aggressive, think endurance road bike rather than MTB’esque. The head tube length is a bit shorter than other bikes in its class but there was plenty of room left on the steerer to choose your bar height, something I left rather high to prevent me feeling too tipped over the front, giving the feeling of better balance and control on off-road descents. The gearing is aimed at adventures off road rather than on it but if you've chosen a 1x bike, I expect that's your intention anyway. The parts complement each other and this bike is a brilliant jack of all trades, it gives you the option to stray from the beaten track and widen your route horizons! 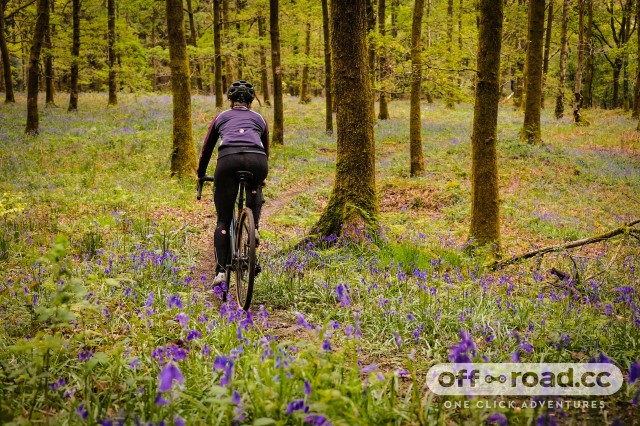 I’ve taken this on road rides, where yes, I don’t have the gear range to keep up with the roadies, but for solo training or recovery rides its ace, a quiet, simple bike that is happy on the roughest of the UK’s B-roads. I’ve also taken it exploring in the muddy Forest of Dean where the reliable Apex groupset is a pleasure to use, where other bikes at this price point get 2x drivetrains that don’t shift well after getting caked in mud, or mechanical disc brakes with little feel, the Grandurance 6 is well equipped to cope with wet trails, grit and grime. The hydro brakes will be a real treat where reliable stopping is concerned if you are used to mechanical discs, I wouldn’t be without them on any gravel bike of mine. Serious tourer's might say these are trickier to fix if you have a problem out on the road, but for the myriad of uses from commuting to weekend trips, I don’t think this will cross a buyer’s mind as a huge problem. The gear range is good, if you are struggling to grind uphill off-road then you can always swap out the front chainring for a 40T cheaply enough, I'd be tempted if this were my bike. 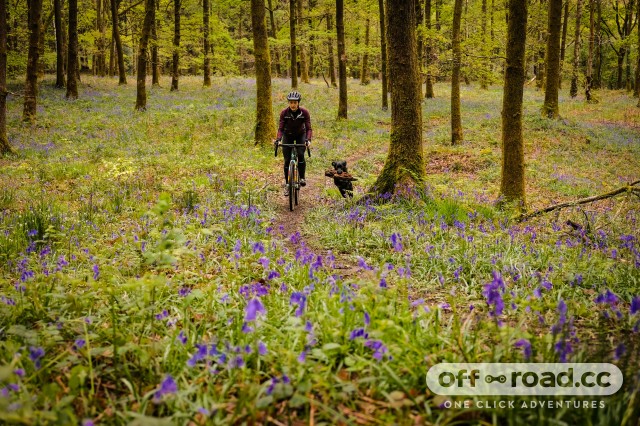 The geometry, and my set up, lent itself to a rather upright riding position, I found it to be one that with a slightly shorter stem was comfortable for long periods in the saddle. The top tube is pretty straight rather than dropped like many modern gravel bikes, so it’ll pay to make sure you’ve got enough standover clearance here. In bikepacking terms the large front triangle lends itself well to bag placement inside the frame whilst still being able to use a full size water bottle. The bike is fairly efficient too, its 9.8kg (21.6lbs) weight moves along nicely and the alloy frame isn’t the harshest ride I’ve ever experienced. 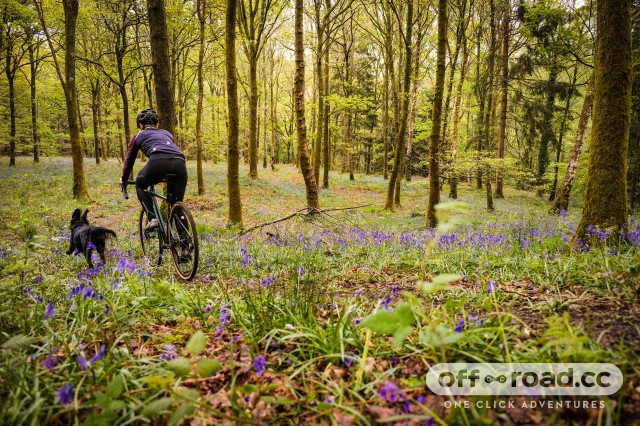 The Bergamont Grandurance 6 is an ideal bike if you are going to be commuting, exploring the back lanes and occasionally bikepacking. To make it truly, truly versatile, I'd like to be able to fit up to 40c tyres in there but as an all-rounder, it’s hard to fault, especially given the fact that it costs less than £1,400 and looks this good! 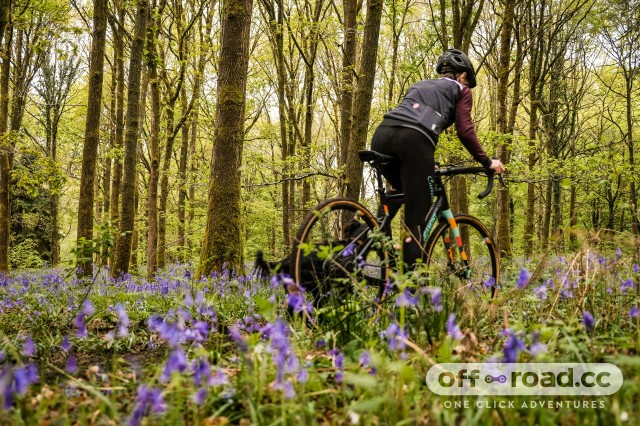 Hard to give firm advice on this one without seeing your proportions. I suggest comparing the geometry to another bike that you have ridden and see if it matches up or use the Bergamont Size Finder, that suggests you might need a 55cm.....