Skip to main content
Log In Register
All City Electric Queen frameset review £1,150.00
Lovely looking but rather flawed as a trail hardtail due to geometry and pricing 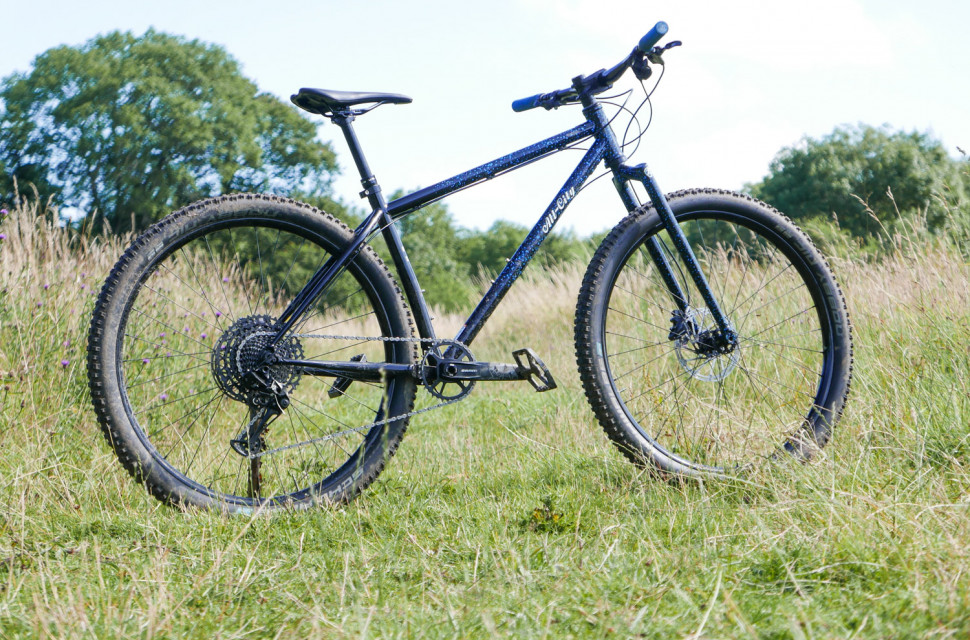 All City's Electric Queen is regal when it comes to looks, with a snazzy splatter paint job and traditionally skinny steel tubing plus some lovely details. Sadly, the handling matches the old-school looks and it's expensive compared to the competition, meaning there are probably better options if you want to build up a fun ferrous trail hardtail.

The Electric Queen is billed as the brand's do-it-all 'ultimate trail hardtail', all based around a rather elegant looking frame made from the brand's own pick of double-butted 4130 Chromoly steel tubing, which they call '612 Select'.

The skinny tubes get some nice detailing, with very smart looking investment cast lugged dropouts and a delightfully retro cyan-coloured spatter paint job that's a huge head-turner. It's possible to run the bike with 2.4x29" tyres or plump 3.0" Plus rubber on 650b rims and there's Boost hub spacing all around, married to a matching five-piece segmented fork the frameset comes with. 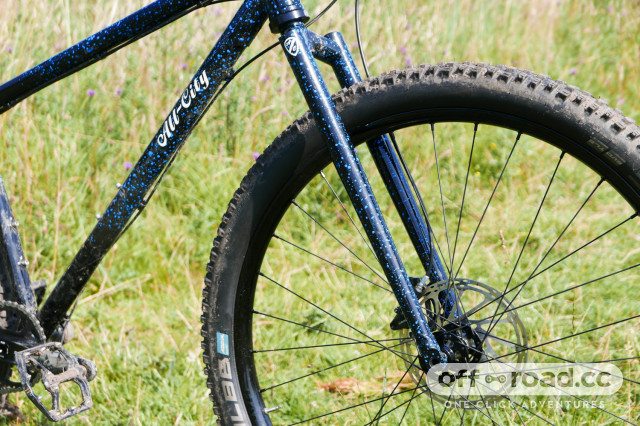 Distributors Ison only supply the Electric Queen as the frameset rather than complete build but they assembled this test bike for us with their own-brand Gusset finishing kit, Halo wheels and a SRAM 12-speed NX Eagle drivetrain and Level brakes.

It's all functionally solid stuff, though somewhat overly so places, with the complete bike coming in at a rather hefty 13kg. I suspect the frame is built from fairly sturdy tubing to begin with, but the SRAM NX  Eagle groupset isn't light and neither are the heavy-duty, wide rimmed wheels and various bits of finishing kit. 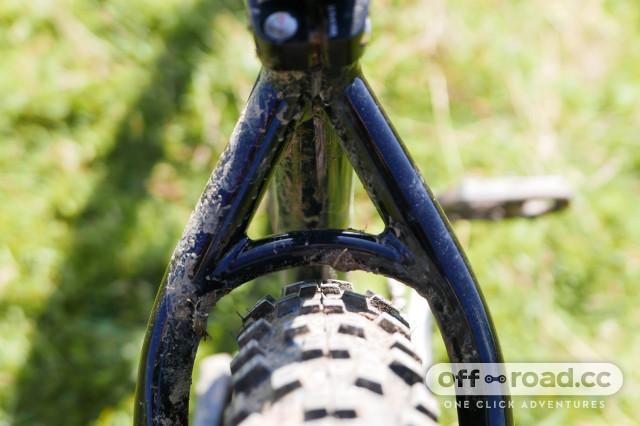 The burly kit and build would make a fair bit of sense for a tough trail hardtail, but the rigid fork really throws a spanner into that particular works. You can fit a 120mm fork - indeed, All-City offer on the complete that in their native US - but the rigid fork this frameset comes with isn't suspension-corrected, which seems a very odd move. 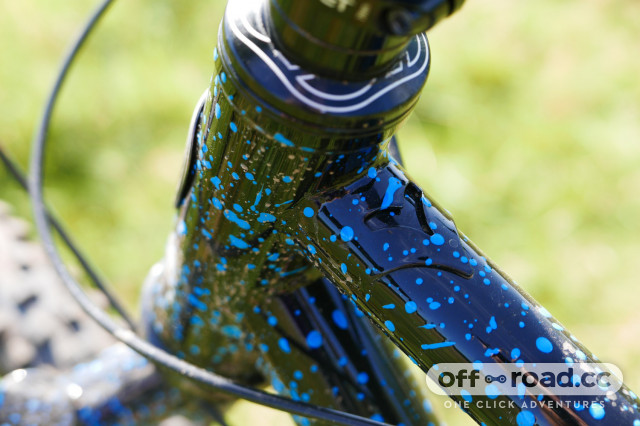 It means that the not-exactly-slack 67.7° head angle with a sprung fork is a steep 68.5° when used with the rigid unit this frame comes with. I had my hands full when it came to anything that wasn't relatively flat and smooth in this guise - you're fighting the twitchiness and the vibrations - and it's not exactly going to prove much of a rival to more progressive machines such as Cotic's similarly wheel size swappable  SolarisMAX if you do go down the suspension route. 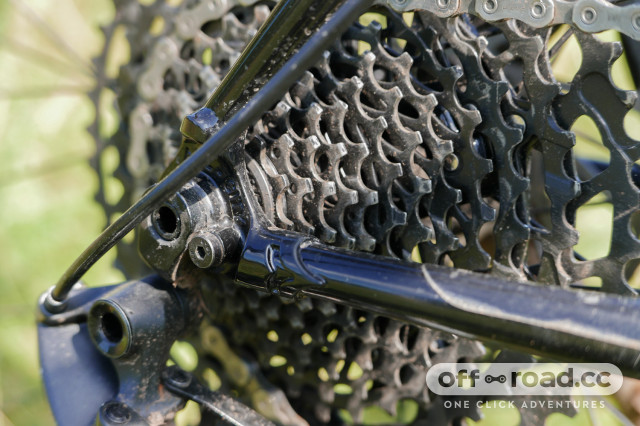 With the 120mm fork, it still sits almost a full degree steeper than Cotic's bike, but the seat angle is decidedly slack at 71.5° (72.3° with rigid), which really makes it known when climbing steep stuff. The reach isn't overly long at 454mm for the large I tested - compare that to the Cotic's admittedly huge 486mm figure - which means there's a much more perched than planted feeling and consequent lack of confidence on anything gnarly. 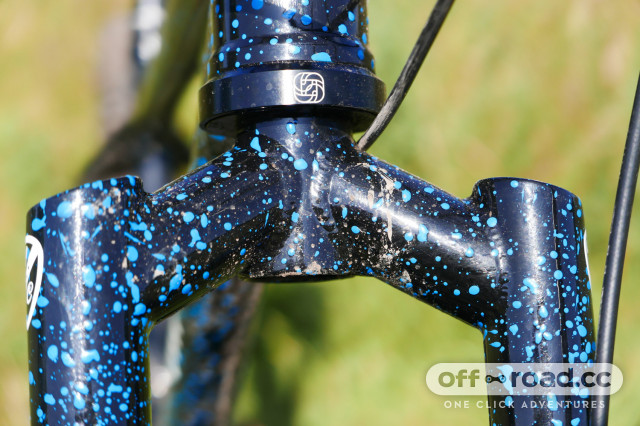 That said, it all feels pretty balanced and fun in a very old-skool way on flatter terrain, but then it lacks the zip and spark you expect when you forgo suspension due to the overall weight of the thing. The rigid fork also suffers from a fairly substantial amount of fore-aft flutter when you stick the brakes on, which doesn't help things any.

The All-City doesn't particularly shine as a more cross-country rigid machine with this build, but I could see it offering giggles to anyone that wanted to build it up with much more lightweight kit hacking about the woods for anyone that prefers the fast - dare I say nervous - handling of steel hardtails of yore. It's still going to have a weight penalty over other bikes pitched at that particular niche, however. 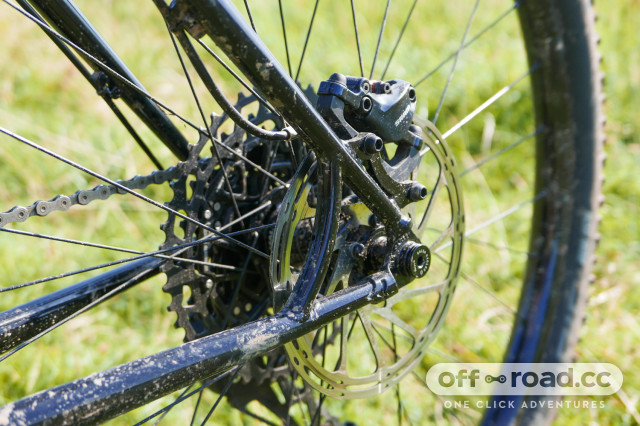 However, there are plenty of other options out there that hit the modern trail hardtail nail more squarely on the head, whether you want to keep it steel (Cotic, Ragley) or sample any of the many aluminium bikes out there. It doesn't really help things that the £1,150 frame and fork cost would buy you one of Cotic's progressively shaped, higher grade tubing Reynolds steel framesets plus a suspension fork for the same money, plus some full-build aluminium trail hardtails from the likes of Nukeproof.

That said, if you're not fussed about progressive geometry (and I get that plenty of riders aren't), like the sweet paintjob and cool detailing, don't mind a bit of extra weight and buy into All City's fun-time, retro vibes then I'm sure you won't be disappointed with machine that's something rather different from the norm.