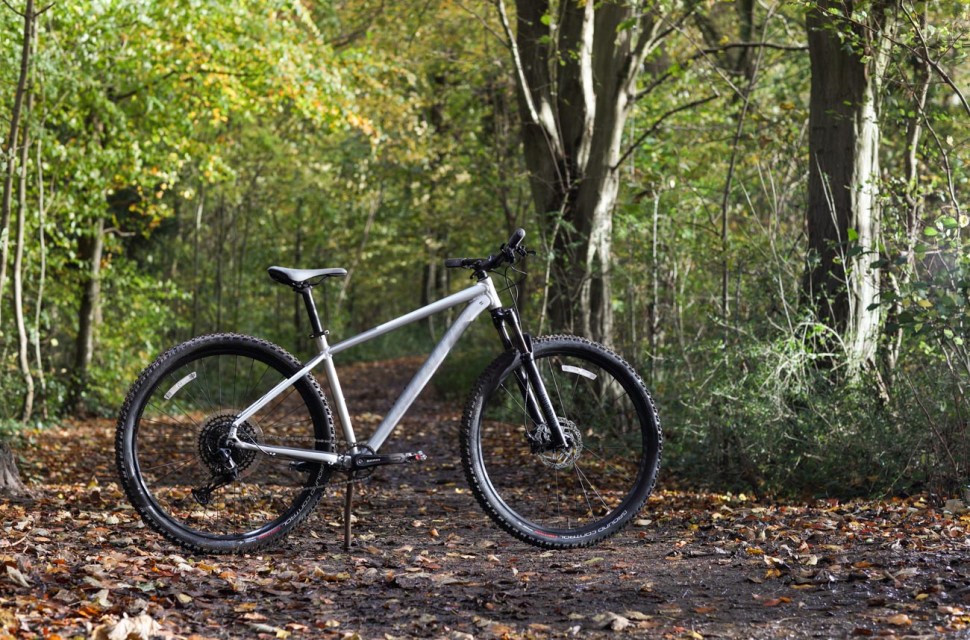 The Rockhopper Expert sits atop Specialized's entry-level cross country range. It’s light and the frame is pretty well-shaped, but the spec leaves a lot to be desired and the price sits at a confused spot in Spesh’s line up.

The Specialized Rockhopper Expert is built around a reasonably light alloy frame, runs a 120mm fork, and rolls on 29” wheels. The frame itself is shaped rather well and the bike offers an engaging, efficient and ultimately entertaining ride.

Unfortunately, the bike as a whole is not without its downsides, and a couple of them are bigguns. 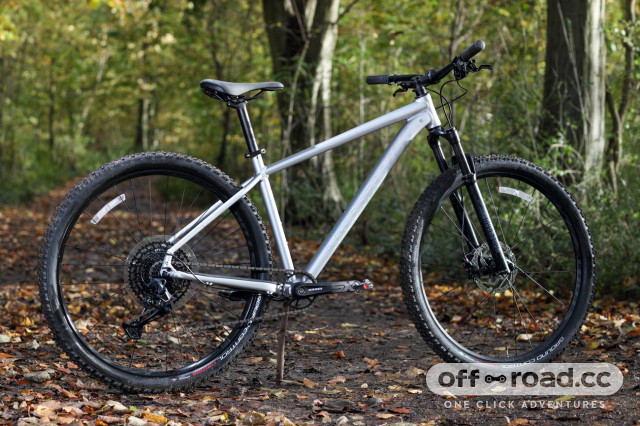 Up front there’s a decent modern cockpit with a 60mm stem and a wide handlebar, but the grips scream out for an immediate upgrade. They’re proper plasticky and don’t provide masses of grip. 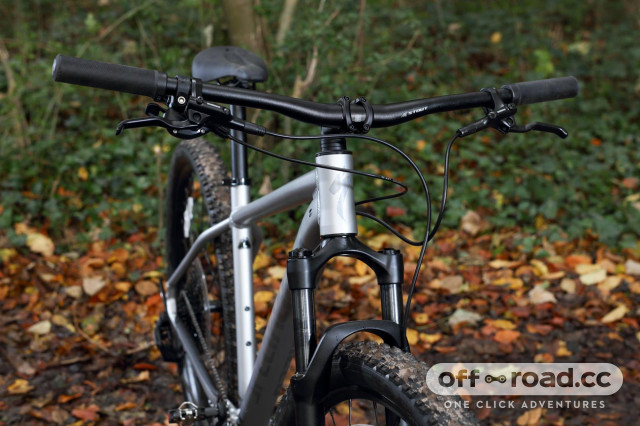 The frame, meanwhile, is surprisingly capable, and only really held back by the agricultural-feeling RockShox Judy Solo Air fork at the front and the slack seat tube at the back. 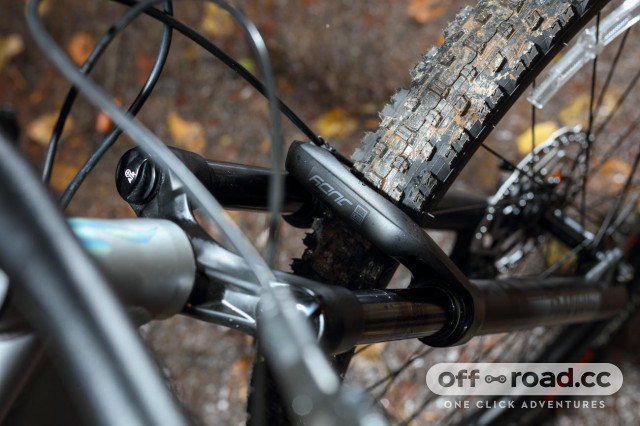 The fork is a simple unit with rebound and compression adjustment, but doesn’t control itself incredibly well. It moves for bumps fairly eagerly, but is keen to spring back without much control and there’s little progression to its stroke.

It’s good enough for easy general use, but on more serious trails it’s easy to overwhelm. The flexy quick-release axle doesn’t help with control either. 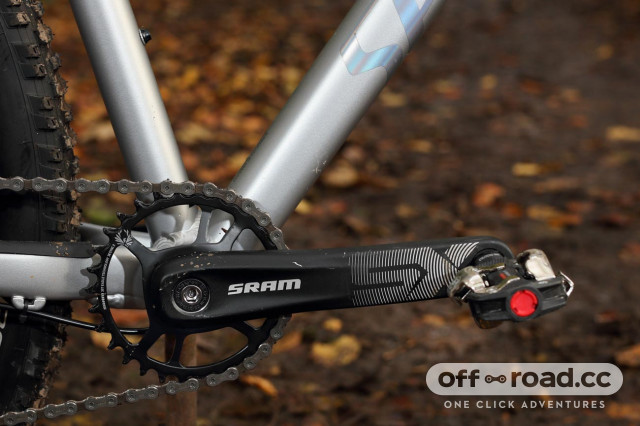 A big plus for most riders, and for rookies especially, is the 12-speed SRAM Eagle SX drivetrain, which is of course 1x. While the cranks are weighty the whole system performs very well indeed, and shedding the front derailleur means there’s less to think about – and there's less weight, too. 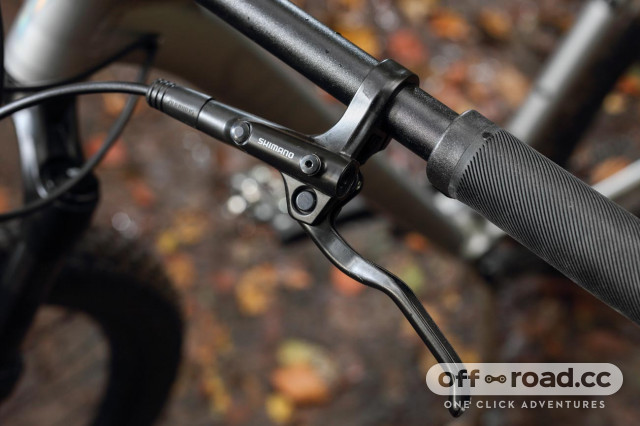 The brakes aren’t too shabby either. They’re Shimano BR-MT200s, and while not as refined as Shimano's spendier options, they reliably slow the bike. They’re also easy to service. 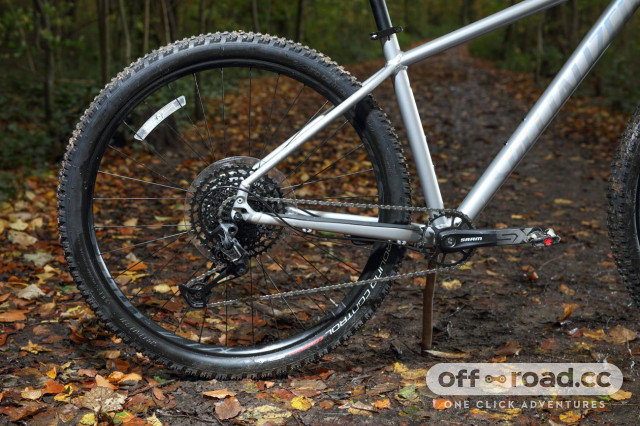 Specialized uses its own wheels here, and there’s not an awful lot wrong with them bar the QR axles, which introduce some flex – you might reasonably expect at least a front thru-axle for this money. The 25mm (internal) rims are ideal for XC and provide a good seat for the 2.3" tyres. 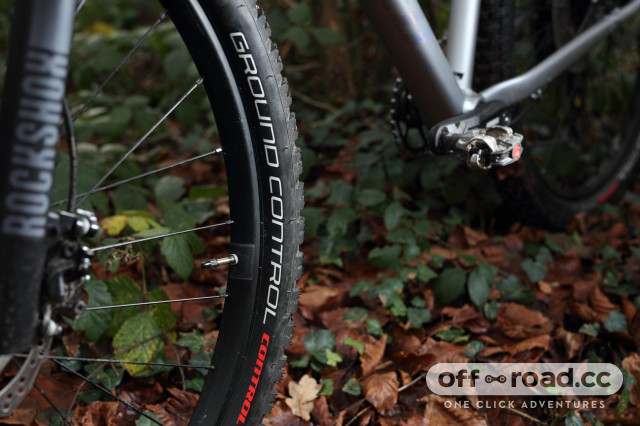 Those Ground Control tyres are also from Spesh and, while the casing rolls over a bit easily in fast and tight corners, they provide impressive grip in a range of conditions... although, they’re easily overwhelmed on soft, wet trails. If you like a spicy ride in the wet, you’ll be happy, anyway... 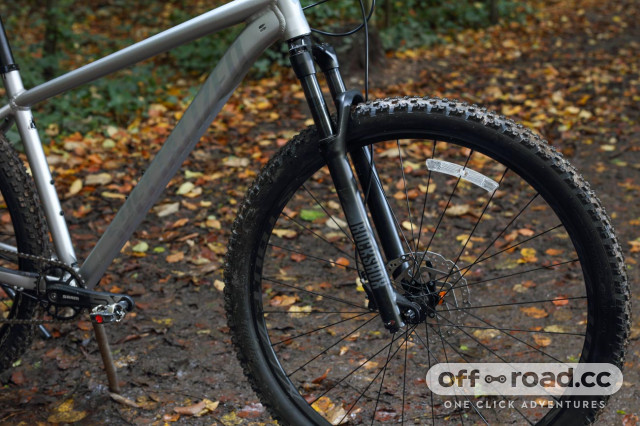 Overall then, the Rockhopper is surprisingly capable, if held back by the way the fork rapidly gets uncontrollable over repeated large hits. You soon find your weight pitched forwards, onto the slightly lengthy 60mm stem, for a ride that lacks confidence on lumpier tracks.

The Judy is a bit of a disappointment compared to, say, the rather capable bolt-through RockShox Sector RL on the Rockrider AM100 HT – a similar bike that's a full £150 cheaper than this Rockhopper. 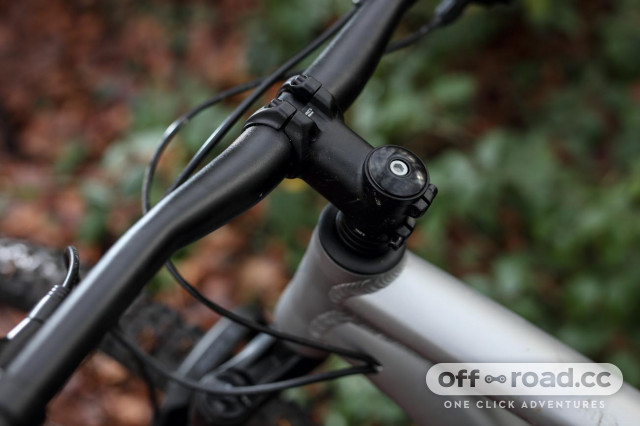 The 445mm reach on the Large frame is fairly short, and that makes it tricky to keep weight properly centered, especially for those rough sections of trail. Something similar to the 465mms of the (also cheaper) Marin Bobcat would be ideal, though would also edge the bike into trail/enduro territory and beyond XC. 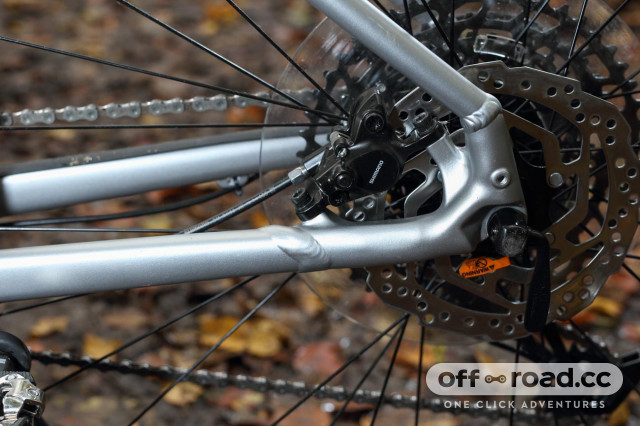 Unfortunately for the XC fans, climbing performance is impacted by the rather slack seat tube creating a fairly stretched out riding position when paired with the 60mm stem. While some may appreciate the room it creates,  the slack angle puts your weight quite far back, and makes it tricky to transfer forwards when the trail points up.

Standover clearance is decent, though, so there's plenty of space for a dropper should you choose. 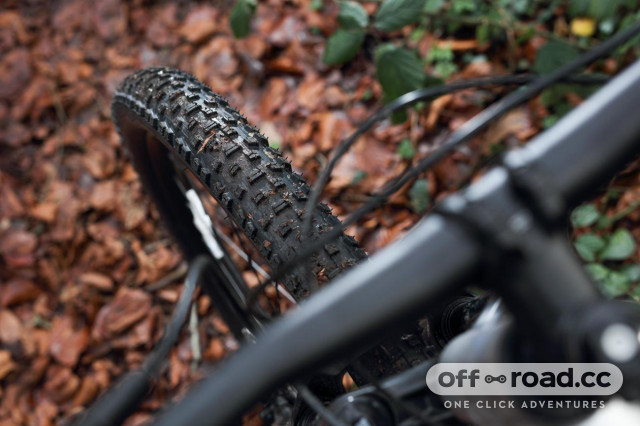 The strongest part of the Rockhopper’s performance is in cornering. Its shortish frame is agile and it’s very well composed on tight, bermy sections – just be careful of those keen-to-roll tyres.

At heart though, the Rockhopper Expert is a great mile muncher on smooth ground and most at home on groomed singletrack. 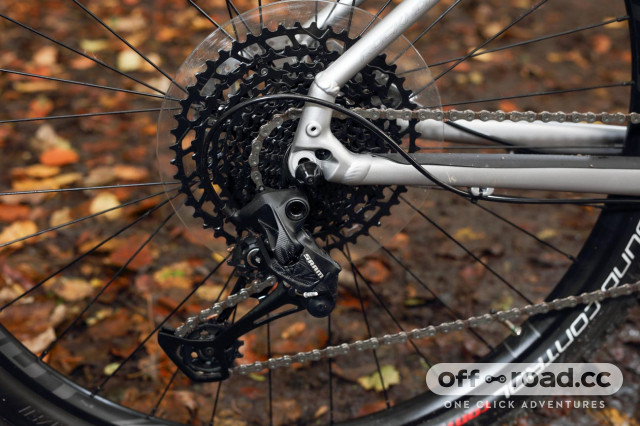 The Expert sits at an interesting price point in Spesh’s line-up. Another £400 gets you the Chisel, which is even more XC focused but has a thru-axle fork and a lighter frame (it’s more open to upgrades too). The Rockhopper Elite, meanwhile, is £250 less, and pretty close in spec bar the 10-speed Shimano Deore drivetrain. 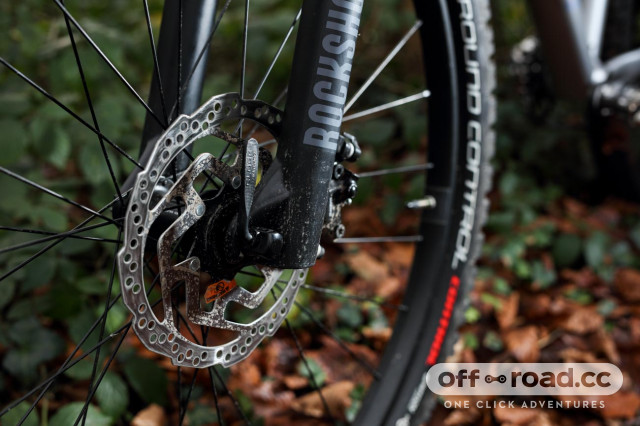 The upgrade path on this bike is extremely limited unless you're happy spending another heap of cash. Fitting a better fork also involves the expense of a new front wheel or a new hub and a rebuild – it's going to be bolt-thru – while if you don't but instead look at lighter or wider wheels, you're limited by the QR skewer. 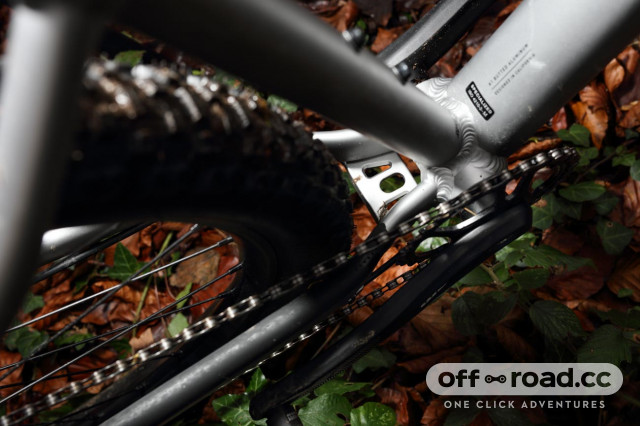 At £1100, the Rockhopper Expert faces some very fierce competition. There's the Marin Bobcat 5 with a Boost-speced, bolt-through fork at £825. Or there's the Trek Roscoe 7 at £50 less with a much better spec, though that's more aimed at trail riding than XC. 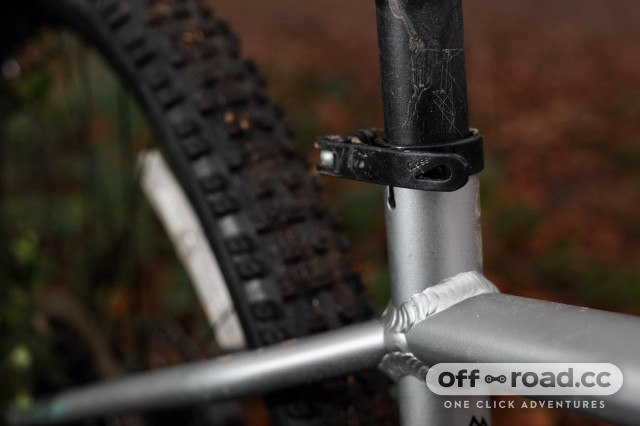 The Trek X-Caliber 8, meanwhile, comes with pretty much the same spec at the Rockhopper and a similar geometry, is aimed at XC, but has a bolt through fork and a price tag of £975. 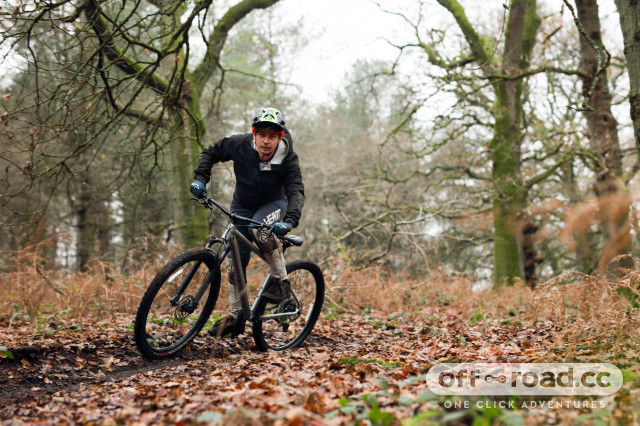 All in all, the Specialized Rockhopper Expert is a fun and engaging ride, but not without its quirks both in the frame and the spec. If you’re riding smooth singletrack or blurring off-road riding with commuting it’s right on the money, but otherwise its fork bounces it away from serious trail riding, and neither the ride nor the spec is seriously competing on price.