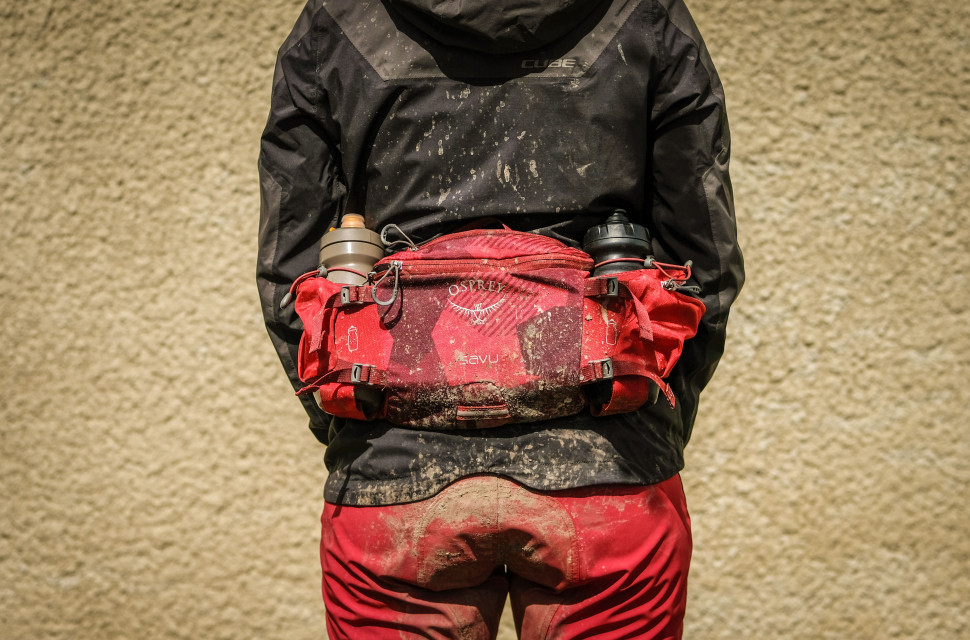 Rachael Wight
|
May 21 2020
|
Overall
Quality
Performance
Value
What's good?
What's not?
Buy if...
You're committed to taking two bottles into the brief showers

The Osprey Savu waist pack offers four litres of cargo space and a minimalist design that's intended for use with water bottles – there's no provision for a drinks bladder. It's relatively large and won't suit smaller riders, but it's structurally rigid, well-supported, well-ventilated, and the price is good.

The Savu sports a symmetrical layout with slots for a water bottle on each side of the 4L main storage compartment. There's an internal framework for shaping, and great ventilation from the Airmesh fabric and thick, ridged foam lumbar pad. It's all pretty robust, and it's showerproof too.

The main compartment, accessed via a full length zip with a usefully large toggle, features mesh pockets for tools. There's a slim rear section with its own zip that's the perfect size for a large smartphone, too – handy for protecting them from tools and things in the main space. Outside there's also a light attachment and a carry handle. 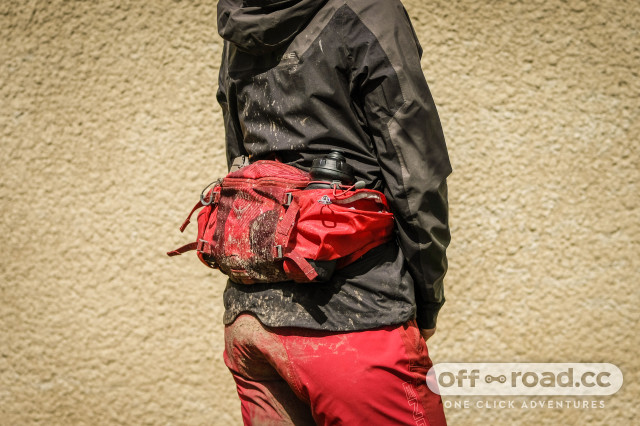 The bottles sit above your hips in collapsible padded sleeves which, when employed, hug the bottle tightly inside that triangular space. 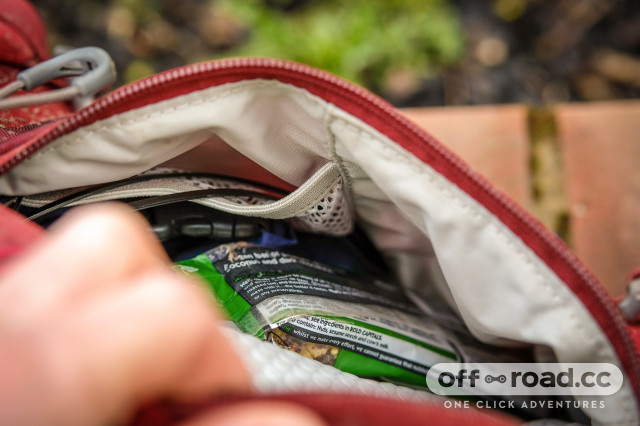 Each has two elastic, toggle operated loops to stop bottles bouncing out of the holder. It's a good safety feature but actually a little unnecessary – once the pack is winched in around the waist the bottles are secure anyway. In fact, they're so secure that toggle aside, it's hard to get them back in the pack! 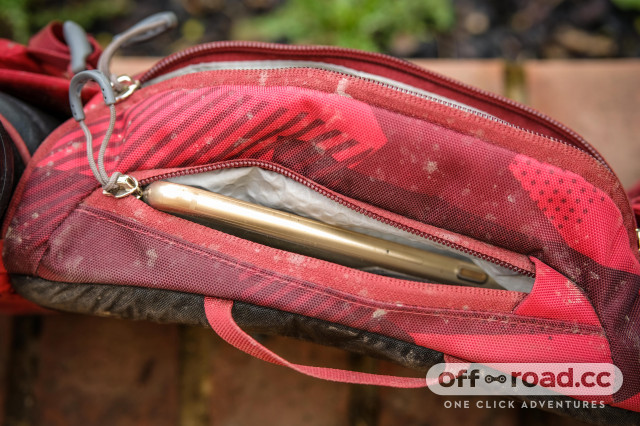 Pulling out a typical 500ml CamelBak bottle on the move is easy, but stuffing them back in is another matter. I ended up generally limiting my drinks to stops so I could use two hands – this pack won't suit determined cross-country riders. 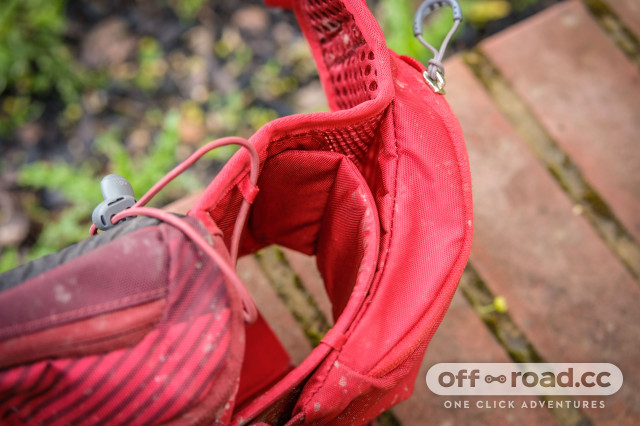 The two large external pockets are super useful for snacks, multitool, keys and so on, and well-positioned for easy access. There are also four outer compression straps to tailor the fit. The waist belt itself is large and, along with the substantial side wings, has a very stable, secure fit. 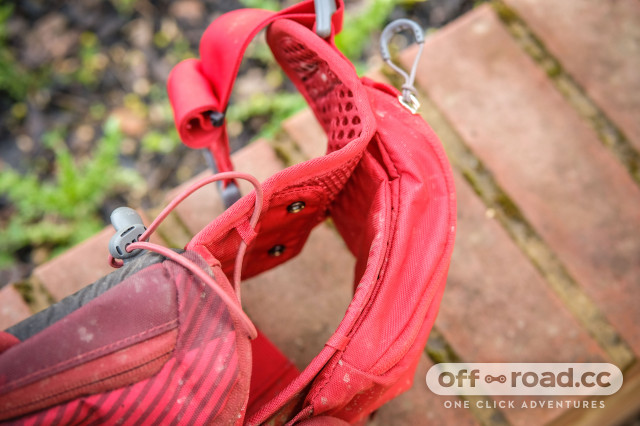 One minor annoyance (which crops up on other Osprey packs too) is the way the long straps are left to flap around with no keepers. I fashioned my own out of zip ties. 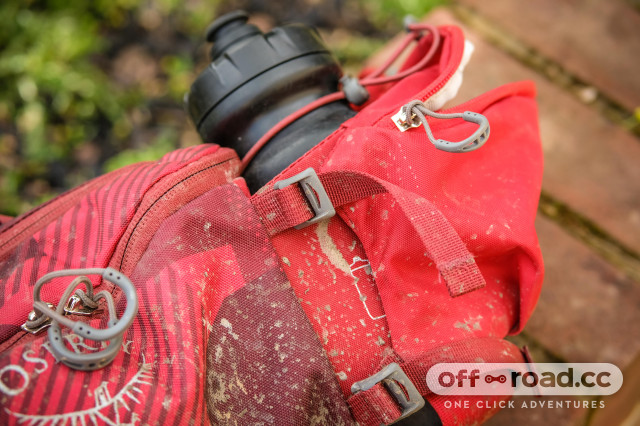 Riding with the Savu proves a little uncomfortable, especially when loaded with two full drinks. Two full 500ml bottles add a lot of weight on your hips, and can also compress the bag uncomfortably into your sides. 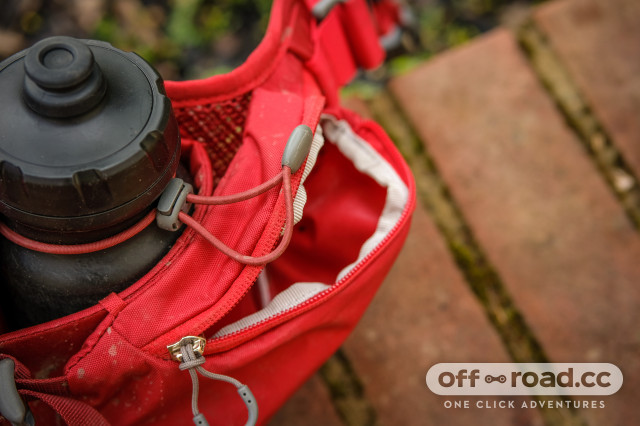 To be fair, I think this might partly be due to my small size (160cm and dress size 8-10). Riders with broader backs will find the Savu wrapping around the sides less, and it feels like that would help. 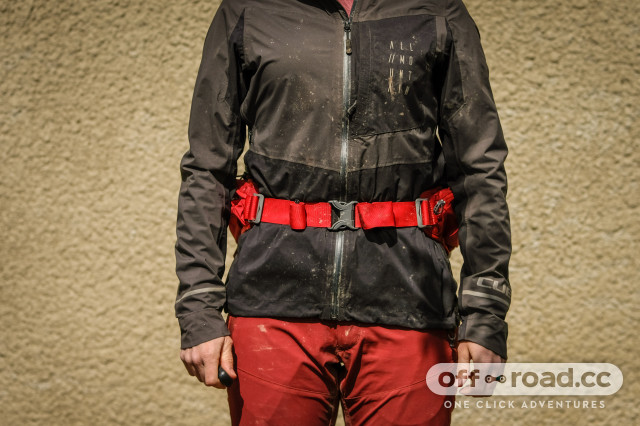 The Savu is super-stable, never jumping around or sagging even when loaded. It's not even that bothered by lopsided loads – a bottle in one side and a rolled-up jacket in the other didn't faze it, and it's a great secondary use for the storage!

The Savu hasn't sold me on carrying two bottles, though. It's bulky, stops the pack conforming easily to your shape, and can be uncomfortable. Without bottles the pack is a nice shape, and it's roomy too – though Osprey's own Seral 7 arguably takes the good bits and adds a reservoir for the ultimate bumbag experience. 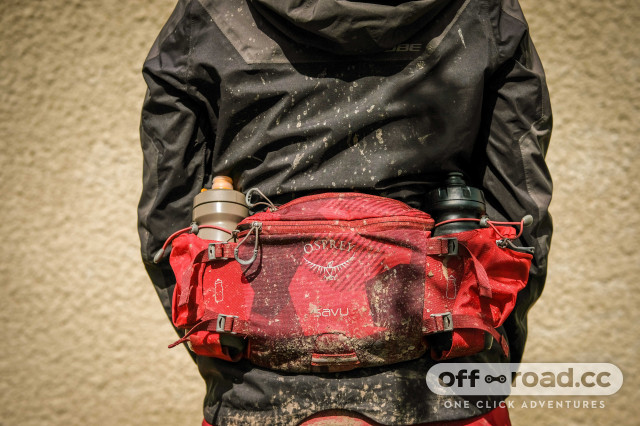 Alternatively, check out the CamelBak Podium Flow, which is also £45 but carries less, or the CamelBak Repack for £70 – it holds a 1.5L bladder, as does Osprey's own £70 Seral 7 (not yet reviewed).

Given its capacity, security and build quality, the £45 Savu is good value. It's comfier without bottles though, and there's no provision for fitting a bladder, so arguably it's best for those looking for minimalist cargo capacity to use alongside a bottle cage.