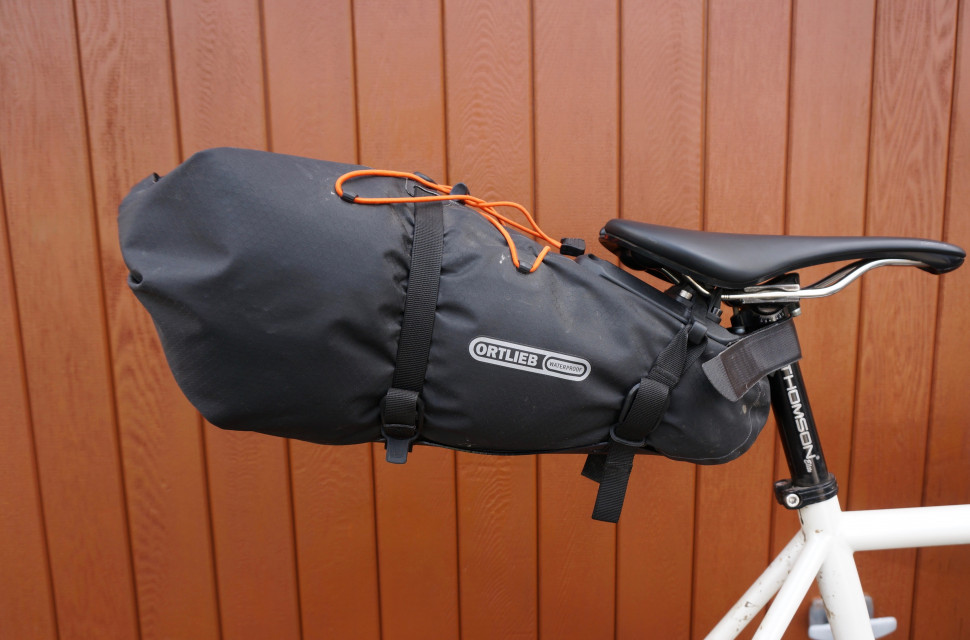 Patrick Joscelyne
|
Jun 24 2022
|
Overall
Quality
Performance
Value
What's good?
What's not?
Buy if...
you want the best non waggling seatpack out there at the moment.

Ortlieb’s Seat Pack QR is a saddle bag that just doesn’t wobble. It mounts via an ingeniously simple mounting system that clamps to your saddle rails and is secured around both fixed or dropper seat posts. It has the usual Ortlieb signature air release valve and is of course waterproof. It’s a great seat pack as long as it fits your saddle

Ortlieb’s QR 13L seat pack is dropper compatible and will fit most round metal railed saddles (not carbon ones) using the patented Seat-Lock attachment. Ortlieb helpfully provides a very handy infographic online showing the saddle position/rail specs that the attachment requires, which is easy to read. You will need 13mm from the rail behind your clamp to the point where it bends up and another 13mm of height between that bend and the bottom of your saddle. Ortlieb also tells you what the angle of the corner of the saddle rails needs to be, but I’m not sure how you are supposed to check that? At least the width of the rails at the mounting point is an easier one to check.

This is asking a lot more of the consumer than they have previously had to worry about during a seat pack purchase with simple straps and hooks. Normally you’d just sling a bag under the saddle on straps and do them as tight as possible to hope it doesn’t wag too much when you are out of the saddle.

While it does take a bit of extra time, it's well worth checking the infographic to make sure that the pack fits your saddle. Either that or take your bike to an Ortlieb stockist and try before you buy. 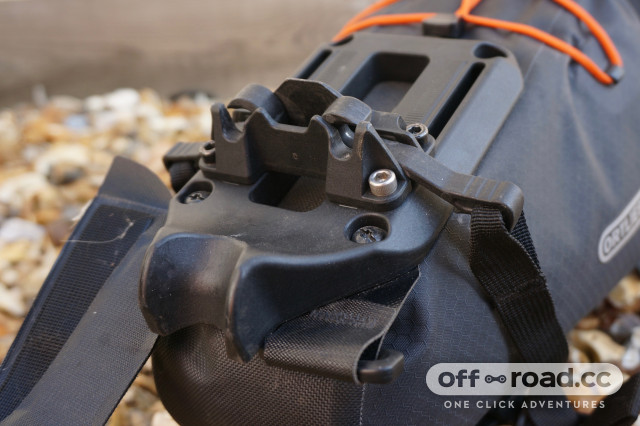 In order to deal with the multitude of different seat post clamp designs, inline and setback, for example, the Seat-Lock attachment system can slide back and forward to fit. Although, it wasn’t able to cope with everything my garage had to throw at it without moving some of the saddles to unusual pedaling positions to make space.

Luckily for me, it fitted my bikepacking bike equipped with a Fabric Line saddle and Thomson inline post with the Seat-Lock adjusted to be as close to the front of the bag as possible.

Fitting the bag is simplicity itself. Straddle the rear wheel with the Seatpack and saddle in front of you, loosely fit the velcro strap around the seat post, lift the bag up under the saddle, and flick the little plastic levers down with your thumbs until they ‘snap’ over the rails. Then, simply tighten up the seat post strap and you’re away. It really is that simple and it just doesn’t move. 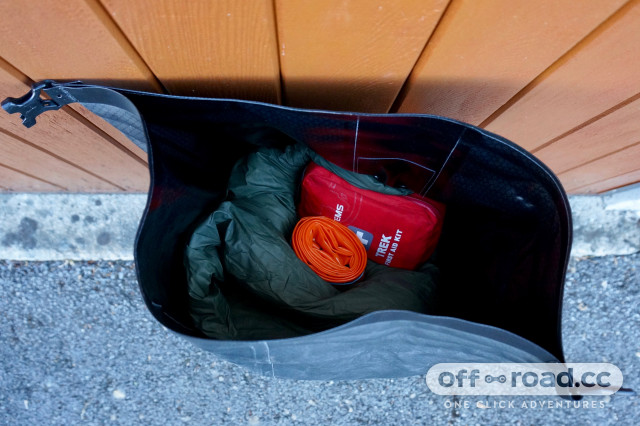 The bag features the usual high-quality welded construction with a wide opening, easy access waterproof roll-top style closure. Ortlieb’s air release valve is present to help you roll the bag down tight by releasing any trapped air. Once at the desired pack size push the valve in and the pack is sealed. 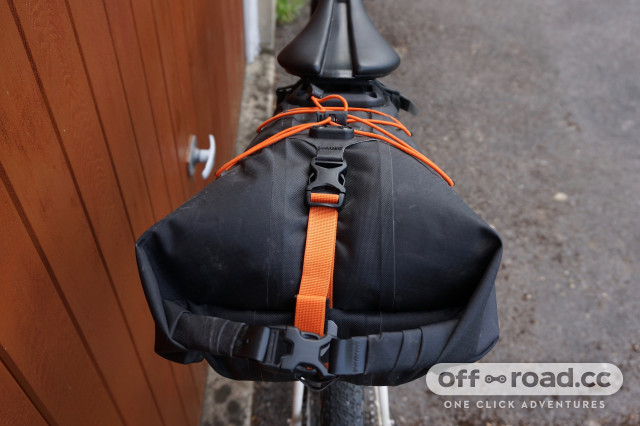 If you have never used this system, it’s very simple and saves lots of time doubled over rolling and rerolling your seat pack to get as much air out as possible. The bag is then closed using a standard buckle with an orange strap and the ends of the roll top are clipped together rather than fixed to the bag’s sides. At first, I was unsure about having this sticking out from the rear of the bag but in use, it’s never bothered me.

Next tighten the side straps on the bag to further reduce the volume, using the valve again to purge any excess air, and tuck the loose ends into their own retained rubber strap keepers. Very tidy. 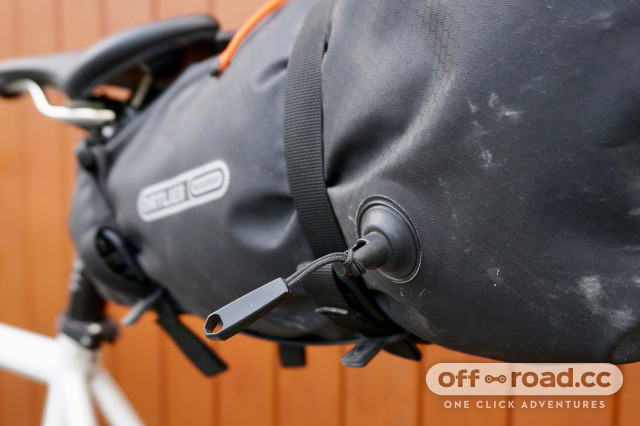 The top of the bag has the classic bungee attachment for extra stuff such as waterproofs and flip flops but it is also easily removable if you don’t want it or replaceable if you break it. 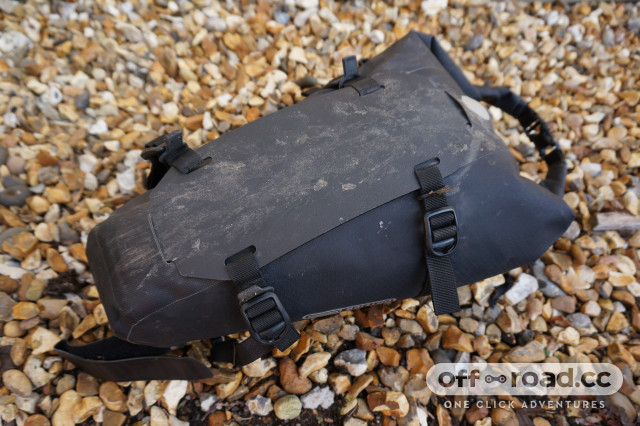 The underside of the bag had a plastic skid mudguard to prevent accidental tyre wear if you mount it too low  (check you have clearance before you ride) and also to keep most of the muck off the bag.

At the rear, the bright orange tightening strap is a little fiddly to guide through the ‘daisy-chain’ slots in the bag which act as both an excess strap holder and reflective detailer. In general, it works well to keep the strap centrally located and there is also a Velcro strap keeper at the end to wind up the final bit of excess strap so there won’t even be any flapping strap behind you. 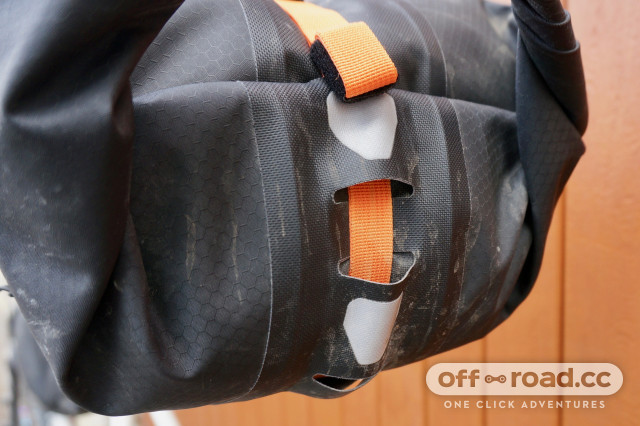 It also comes with a dropper post clamp which mounts to the top of your clean dropper post and the strap goes around that instead of the actual post. The guide is shaped to fit neatly over the top of the dropper post without damaging the seals. Yes, you will lose 4.3cm of travel on your post (clamp height) but you will be able to drop it without problem (tyre clearance allowing) and it still won’t waggle more than your post. 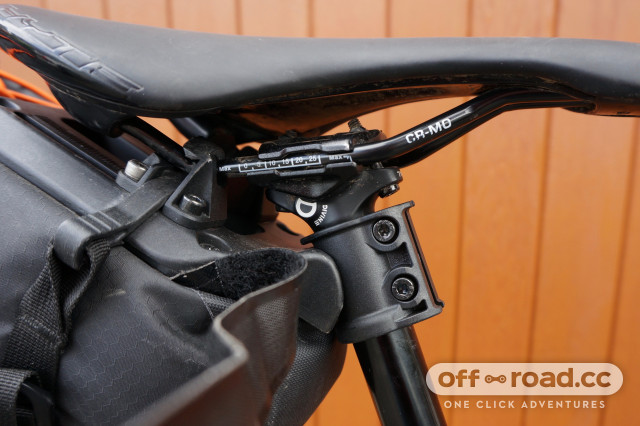 In use, it is the single most solid seat pack that I have used and I’ve tried quite a few. It really is part of your saddle and seat post and I detected no movement whatsoever at all from the bag under riding conditions regardless of how lairy I was being on the bike.

On a recent 100miler off-road with the bike packed for a spot of camping, the impressively solid sway-free performance got a lot of admiration from my fellow bike packers as they waggled and swayed around me, and again at the campsite when I demonstrated putting it on and off. It’s such a simple system that so far has performed faultlessly. 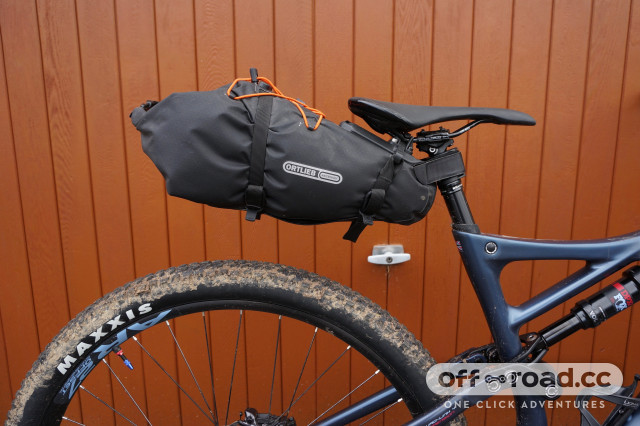 The only issue I have with the seat pack is that it doesn’t fit all saddles, and for some that it does fit, it might require too much saddle adjustment on the rails for some riders. In order to fit one of my bikes I had to move the saddle so far forward, it would not be comfortable for my knees to ride longer distances.  It may simply have been that the saddle rail spec on that bike is not 100% compatible. 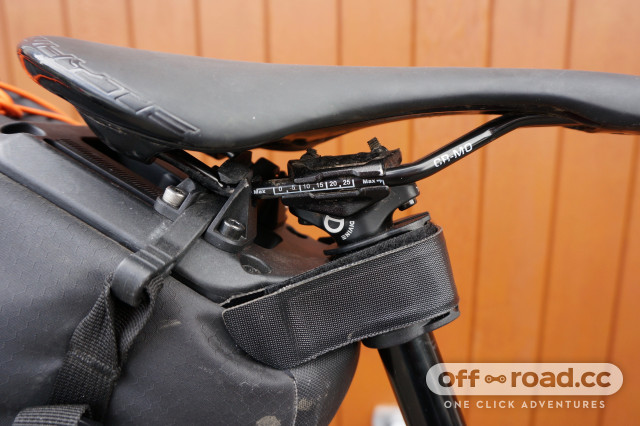 Competition is strong in the Seat pack market and many of them have their own ways of controlling the wagging effect with greater or lesser degrees of success with inserts and stiffeners. Restrap makes the very good Saddlebag at £120 with a clamlike hardcase to hold a dry bag with much the same capacity at 14L but it is not specifically dropper compatible. Apidura offers the Backcountry Saddlepack which is dropper compatible but at nearly half the size and £140 it's only for those shorter trips or very minimalist packers. At around half the price Altura Vortex 2 comes up slightly larger or slightly small Seatpacks at £80 and £60 respectively but they are not dropper compatible either and miss out on a lot of the features.

Ortliebs Seatpack QR is no lightweight at 625g so that will upset some weight weenies but for everybody else, it’s got to be close to the top of the list.

While not the lightest, or the cheapest, the Ortlieb Seat-Pack QR is very impressive being both incredibly stable and a doddle to fit. The only downside is that it doesn’t fit all saddles, so if it doesn’t fit yours and the outright performance of the Seat-Pack QR has you tempted, you’ll have to account for the price of a fresh saddle too. 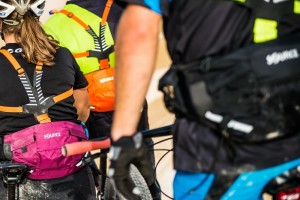 Ortlieb says "Thanks to the unique Seat-Lock attachment system, the Seat-Pack QR is quickly and securely mounted and just as speedily removed, completely residue-free. An adapter even enables the use of a dropper post, making the innovative Seat-Pack QR suitable for a variety of bikes."

extremely well built from high quality durable materials. Just in case anybody asks - the miss-matched colour bolts in the photograph are my fault. I lost to black ones.

As long as you check the spec and it fits your saddle it's so simple to fit. One of the other reviewers picked it up in the office and walked over to three bikes in for review and fitted it in seconds to all three having never tried to fit it before. It's very simple and intuitive,

So far so good, stuffed to the limit it shows not sign of wear. Only the muduard underneath is looking dirty and the rear where it get spattered. Otherwise it's still good lookiing

No waggle at all. it has no measurable affect on the handling

It's more expensive but it has all the features that you'll need in a seatpack. Many cheaper models only have part of the feature set.

It didn't fit every bike i own

A well-designed, waterproof, good-size seat pack with all the features that doesn't waggle at all and can be used on both your Gravel and Mountain bike (saddle rail permitting)

Can get a set of two panniers AND a rack for not much more than half that price...