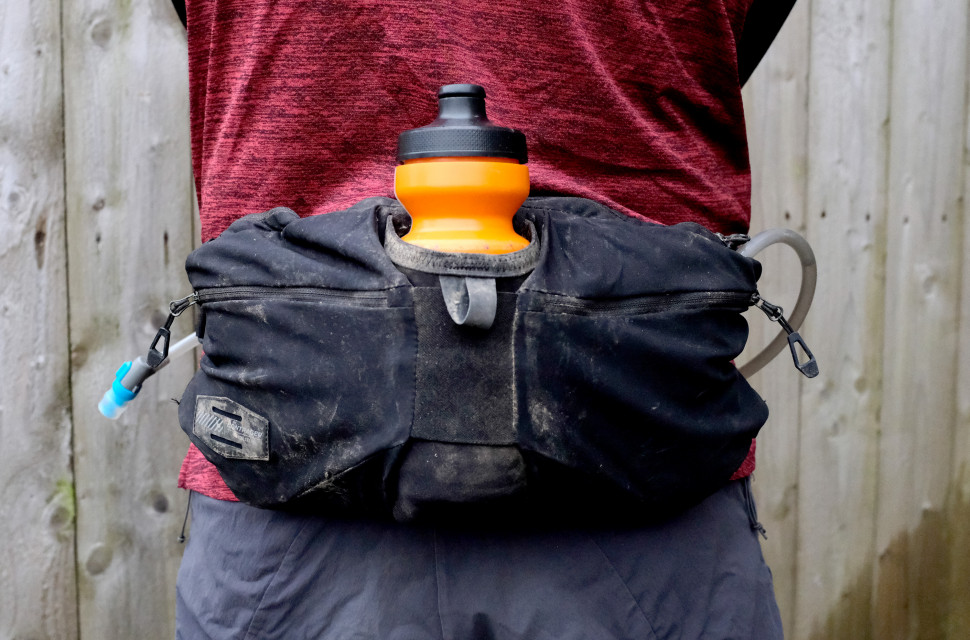 Jim Clarkson
|
Feb 19 2022
|
Overall
Quality
Performance
Value
What's good?
What's not?
Buy if...
you carry featherweight kit and have to use a hip pack.

The Bontrager Rapid Pack Hydro is a low profile hip back with a 1.5L reservoir, space for a water bottle, and carrying just the very basic, essential items. Its round shape and lack of reinforced back structure make it move around when riding anything but sedate trails, especially when loaded up. The hose magnet also became loose, resulting in a compromised hip pack. 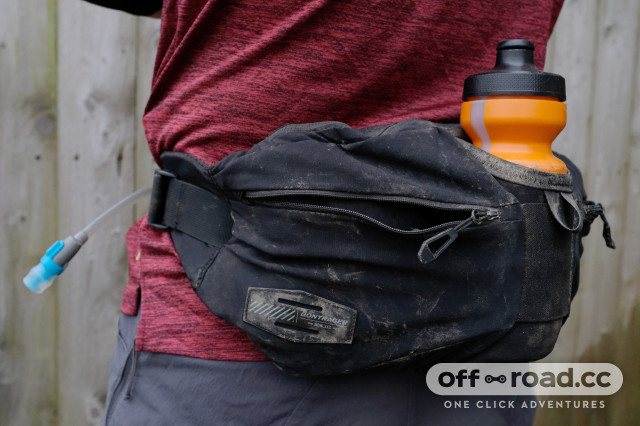 This is a sleek and clean looking hip pack with a claimed 1.64L internal storage, a central pocket for a standard water bottle, two outer pockets on either side and a main pocket for the reservoir.

The main material feels thin and stretchy but tough enough for off-road use. The waist strap has minimal foam padding, so it also feels quite thin. The rear of the pack has a mount for a clip-style rear light, made from a thicker, rubberised material that also carries the Bontrager logo. While there are no reflective elements across the pack, there is a magnetic clip that stows the reservoir tube in place.

Inside the main body, there are two velcro tabs for securing a pump and the 1.5L Hydrapak reservoir, which is well made, easy to fill and have always been reliable in previous test packs. Its construction is good, and it felt tough and remained so during the test. It's also pretty low weight at 316g with no reservoir.

While designed as a light and minimal hip pack, it can be loaded up with a fair amount of stuff, the usual tools/tube. It's a pretty straightforward hip pack in terms of material, closures and build, except for the elasticated central pocket built solely for a water bottle.

The pack has a bias towards more cross-country riding. It's aimed at replacing a seat pack that aren't compatible with dropper posts, and there is a non-reservoir version also available. 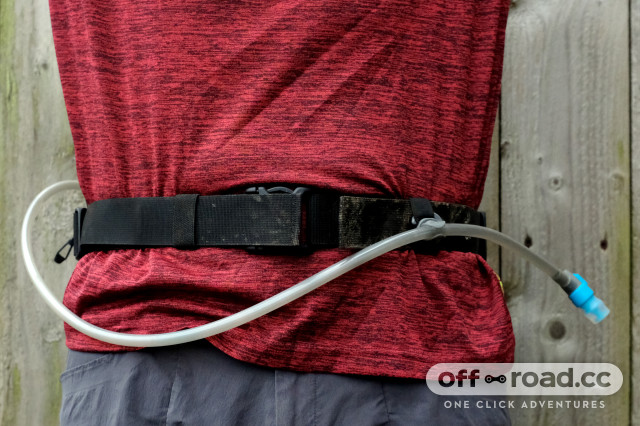 I began testing the Bontrager Rapid Pack Hydro without a water bottle. My first impression was that there was a fair amount of vertical movement even with the leanest amount of kit, even with the waist pulled in tight. The waist strap has minimal padding and feels relatively thin, causing it to dig in. The pack area that sits against your back isn't well supported with any type of semi-rigid structure like a more rigid foam or thicker fabric. Without this stability, the pack tends to roll into a cylindrical shape against your back. This issue only worsens with more weight, especially with a full reservoir.

I also found the hose was difficult to route effectively and often would not remain on the magnetic security point. This happened even on smooth trails and frequently on rougher trails when I moved around the bike.

I understand the ethos of low weight, minimalist kit, but it feels wasted when its performance is compromised. It feels distracting when riding with a full bottle in the pack on anything but fire road. The bottle remained secure in its pocket, but it's also directly in the line of rear tyre spray, causing your bottle to get covered in muck. I'd also not be happy with it being against my back in a crash. 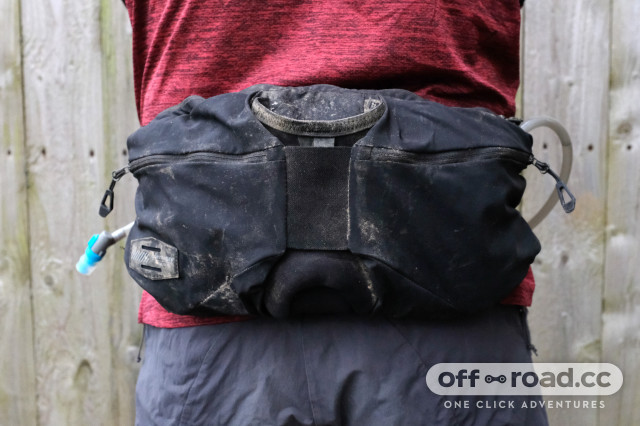 If you ride short loops near your vehicle or home and want to carry the very least amount of stuff and perhaps no water in the pack, then it just about works. Add water (and weight) or solid objects, like a pump or bottle, and the pack feels awkward and bouncy. For the price, there are better packs that are larger and stow gear better, and the weight increase is so little that the performance benefits outweigh them. The price is also pretty high for a low load pack - just under £100. I would definitely look at other options. The Amplifi Hipster 4 tested recently, while not perfect, still offers superior storage and stability, which highlights the Rapid Pack flaws: it isn't great when riding, has the annoying hose magnetic, and there are plenty of other packs that work and ride better.

I liked the ethos of the Rapid Pack Hydro - simple, light and minimal. It's the execution of it that I don't. Despite the actual shape being good, the foam area that sits on your back doesn't stay flush and, when full, it peels away from your back, creating, at times, a very bouncy feel. Even with just a small multi-tool, pump, tube and tubeless kit (which I think is the least you'd take riding), the contents feel loose inside. When strapped into the velcro tabs, a pump ended up feeling like it restricted or misshaped the pack more. When you have a loaded bottle and a pump, this increases the poking out manner of the pack. If I added a jacket to pad it out better, the fuller pack made it misshape even more. It's really down to the lack of structure overall.

The Rapid Pack Hydro is meant as a essentials only hip pack for short, faster rides. I found it lacks stability, the straps weren't very comfortable and the hose magnet was ineffective.

It's well made, as in decent stitching but the choice of a light foam in the back panel is up to task.

The pack rolled and bounced a fair bit, even when pulled very tight. The hose magnet was weak and often came loose.

The fabric is durable and hasn't show signs of wear in the test period.

It's use of a thinner, lighter but durable fabric makes it lighter - but the thin, flexible foam on the back panel, being lighter, lacks rigidity and effects the stability.

Not really, it rolled and bounced even with a very tight strap compression.

If it performed well, it would be ok value, but there are plenty of other packs that perform better and still carry more, but also work low loaded.

It didn't work particularly well for a hip pack - perhaps for gravel riding when it's very smooth, but even then, at high cadence it bounces.

Despite a good ethos of light and fast, the flexible construction makes for a bouncy uncomfortable pack and then the. weak magnet on the hose adds another flaw. I can't recommend, and when compared to others in the same price range, it lines up even worse.