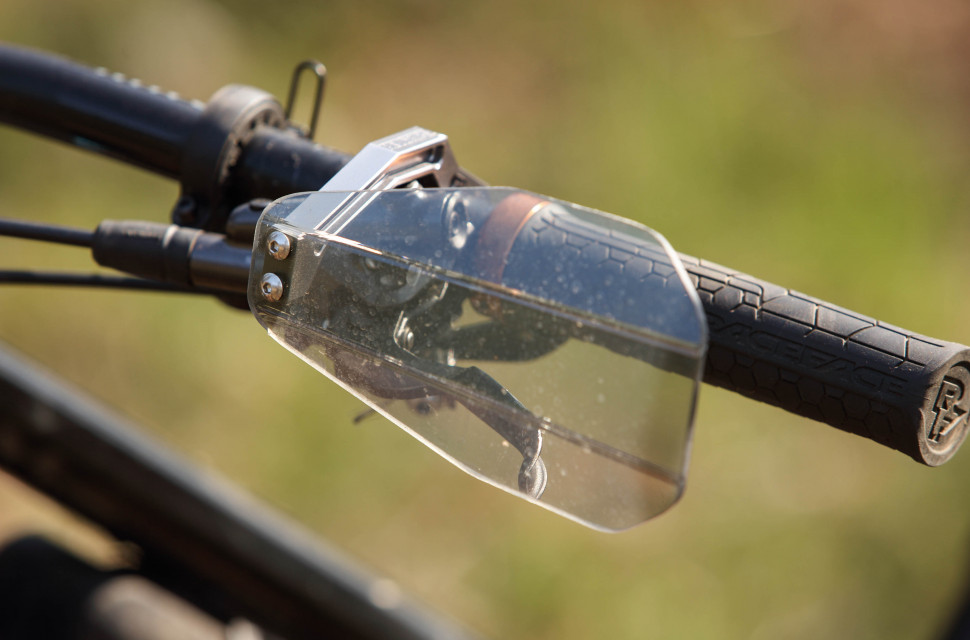 Liam Mercer
|
Mar 26 2022
|
Overall
Quality
Performance
Value
What's good?
What's not?
Buy if...
You don't like the look of handguards but want to reap the beneftis

As some of the most expensive handguards on the market, the Revgrips Handguards solve two of the biggest issues that plague others; the looks and integration with Shimano brake levers. These handguards are built to impressively high quality, and they do their job exactly as expected. They are pricey, but you definitely get what you pay for.

The Revgrips Handguards were born by needing something to bash away overgrown trails, but the folk at the brand struggled to find anything that suited their particular needs. Thus, they designed their own. Revgrips also recognized that handguards aren’t exactly the prettiest component and wanted to change that.

Their build is simple, with mounts constructed from 6061-T6 aluminium that’s been anodized to a dark grey colour to match Revgrips’ existing grey stem and grip collars. Then, the shield that’s screwed on with two Allen bolts is made from transparent polycarbonate. The pair of guards tip the scales at 132g.

These handguards look the part, the mounts are finished to extremely high quality, and the fact that the shields are transparent does a lot to solve the questionable look of handguards. Something that was a bit of a concern was the stiff polycarbonate shields. At first, I thought they would easily snap as they feel like acrylic planks. Still, after some serious bending, they proved their strength while remaining malleable enough to cope. 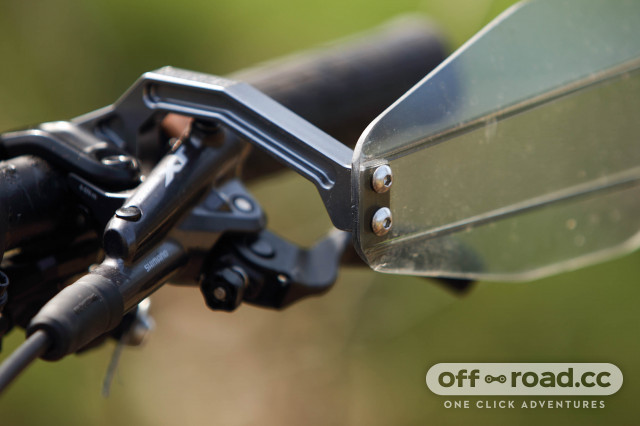 I’ve said this about other guards before, but installation is as easy as it gets; simply bolt the shields on with the included Allen bolts and then clamp them around your bar with the hinged clamp. You don’t have to remove your grips or disassemble any of your cockpit like you have to with other guards. You might have to move your shifter, but that’s as much effort you’ll ever have to put in. 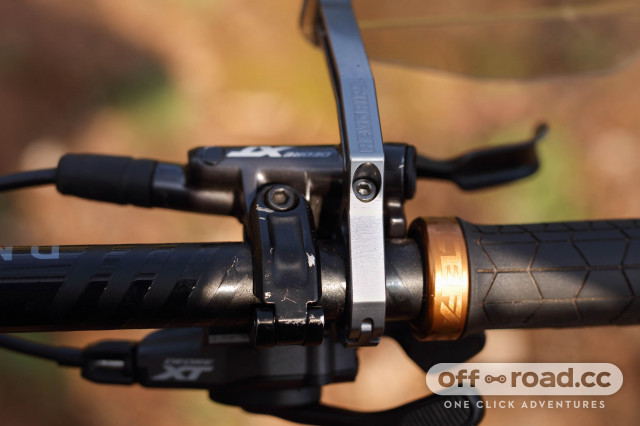 Going back to those mounts, they solve another flaw found on other guards; they work with Shimano brakes. These can clamp in between the brake’s clamp and the support attached to the reservoir, allowing you to run your Shimano brakes butted right up to the grip while keeping the full coverage of the guard. On others, you’ll have to run your brakes a little more inboard to mount the guard in the best place, which isn’t ideal for many.

Having mounts that stretch over the top of Shimano brakes isn’t just useful for brake set up, but it also makes for easy handguard alignment. Sit them on top of the Shimano brake, and you shouldn’t need to whip out the protractor to line them up properly unless you run your brakes at different angles. 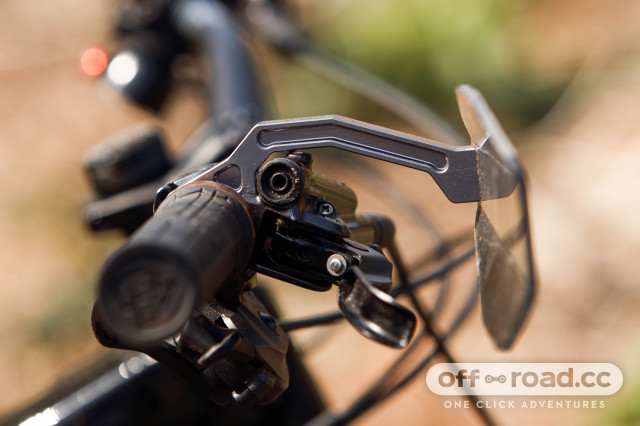 At £80, the Revgrips Handguards are the priciest on the UK market, but you’re buying some serious quality. To compare, I really like the Sendhit Nock handguards, priced at £60. They’re mega adjustable, and they even come with a bit of protection built-in, though they’re not as well made as Revgrips’ offering.

Then there are the AVS Racing handguards, which are even more basic than the Revgrips guards, using a slide-on clamp, and they don’t offer as much coverage. I also found the shield-mounting screw to work its way loose once or twice. They cost £63.

One thing that neither of those guards comes with though is the seamless compatibility with Shimano brake levers. That in its own right has got me really liking Revgrips’ handguards. It allows me to run my levers just as I like them while reaping the benefits that handguards offer. They look great, too, and will likely find a permanent home aboard my race bike.

If you’re not one for the looks of handguards but want to avoid painful scrapes with trailside foliage, the Revgrips Handguards look great and are built to very high quality and the best bit; they integrate perfectly with Shimano levers.

Revgrips says, "Our Hand Guards are manufactured in our facility in CA. The Shield is made of high-strength, transparent gray Polycarbonate. The Mount is 6061-T6 Billet Aluminum, anodized Dark Gray to match our other components. Not only do our Hand Guards look pretty cool, they also work great and install in a matter of minutes." The guards are of high quality, they're easy to install and they do their job very well.

Excellent coverage and they work well with Shimano levers.

Polycarbonate shield feels brittle but bends. No issues with durability.

6g heavier than the lightest set on the market.

More expensive than many handguards on the market but none of those come close to the build quality of the Revgrips handguards.

Does it's job very well. They bat away foliage while looking good and being easy to install.

An excellent pair of handguards with a sky-high build quality and easy integration with Shimano levers.

Full finger gloves do provide some protection but they definitely don't stop nasty thorns and other painful things from finding their way into your knuckes. It's also nice to be able to take a tighter line around a corner (or similar) with the ability to stuff an end of the handlebar into a bush with a much-reduced fear of something grabbing hold of your brake lever.

Then, if you're going quick enough for something to force your bar around, it's likely going to happen with or without handguards. Though, there's some likelihood that the handguard will offer some protection, leaving you with slightly less mangled hands after an encounter with an immovable object. Take a look at the Nock handguards, they even have foam built in... If you can't tell, I'm quite a fan of handguards!

Surely if you are this precious full finger gloves are a better option?

Having a giant flappy paddle in front of your bar just increases the risk of catching a big enough branch to force the bars around.

Surely if you are this precious full finger gloves are a better option?

Having a giant flappy paddle in front of your bar just increases the risk of catching a big enough branch to force the bars around.