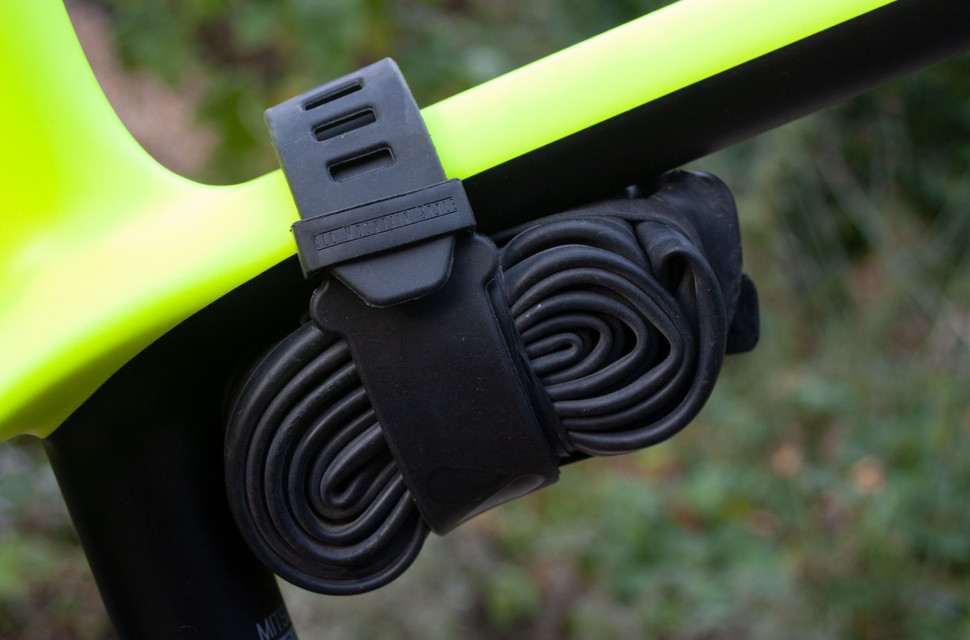 The All Mountain Style OS Strap is focused on securing the barest of essentials, which is to say your punctures repair kit. That's a pretty narrow focus that really limits its usefulness, however, plus it's awkward to fit and insecure unless you manage it perfectly.

The OS stands not for oversize – or even Ordnance Survey – but for Oh Shit. Yes, really. All Mountain Style says it's for ‘those Oh Shit! moments when you flat,’ which basically means it's a little rubbery belt for strapping a tube to your frame.

Wrapped around an average top or seat tube, the OS Strap can encompass an inner tube, C02 cartridge and tire levers. Need a multitool too? You're out of luck unless you have an HP as well (Handy Pocket).

This strap is designed to be mounted anywhere on the bike, and weighs just 42g. It’s a bit narrow, however, which isn’t great for stopping your stuff flopping out one end or the other, and it’s very short. It would be nice to have some sort of case for security, although that would obviously add weight – plus it does include a small band to bundle up your stuff before attachment. Handy if you're looking to lose it all at once...

On rough ground, I often found my kit loosening after a very short time, which is probably not what AMS meant by ''Oh Shit! moments'. For gravel or very mellow trail riding it’s okay, but as the OS is so small I ended up running an additional carry strap anyway. Which kind of negates the minimalist weight thing.

The OS is secure if loaded carefully, but just isn't as reliable as other carry straps. Plus, once stuffed full, attaching it is awkward as you need to hold the tube in place, wrap the strap and then pull super tight – it’s fiddly.

Even on skinny steel frames it takes some force to get it on (which can then squeeze the tube out), while bulky frames (here’s looking at you, eBikes) may defeat it entirely.

It wouldn’t take much more material to make it hold more stuff and be easier to use. As it is, it’s vital to load your kit centrally and not roll your tube too circularly, or the strap will work its way off. The issue is the clasp. It’s simply not big enough. 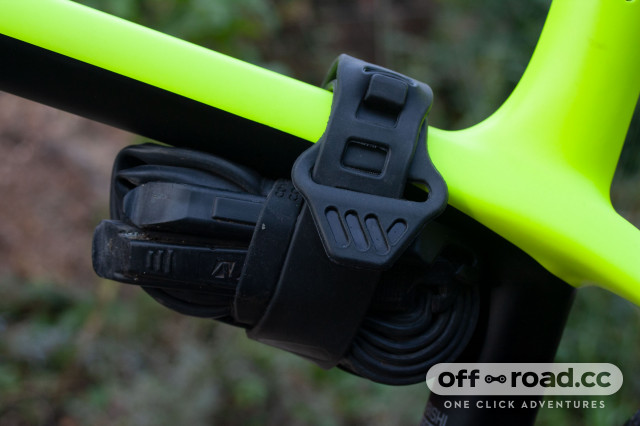 The clasp and everything else is made from a smooth TPE (thermoplastic elastomer, a kind of plastic/rubber hybrid that's apparently safe to eat off... not exactly a useful point), so it does at least feel both strong and durable.

Unlike any woven material it’s not absorbent, so it doesn’t hold water and mud comes off pretty easily, though of course it can still collect between it and the frame. Being soft and smooth, it’s less likely to grind your paint away with it than a woven fabric, too.

It’s metal free – even the buckle – so in a crash there isn’t anything extra to poke you or your frame, which is good. The downside of TPE is that it does feel a bit less stretchy and harder to fasten when cold.

I feel the OS Strap misses the mark, yet with few small improvements – a little extra length and width, essentially – it could really be useful. For now though, it's more Oh Dear than anything else.