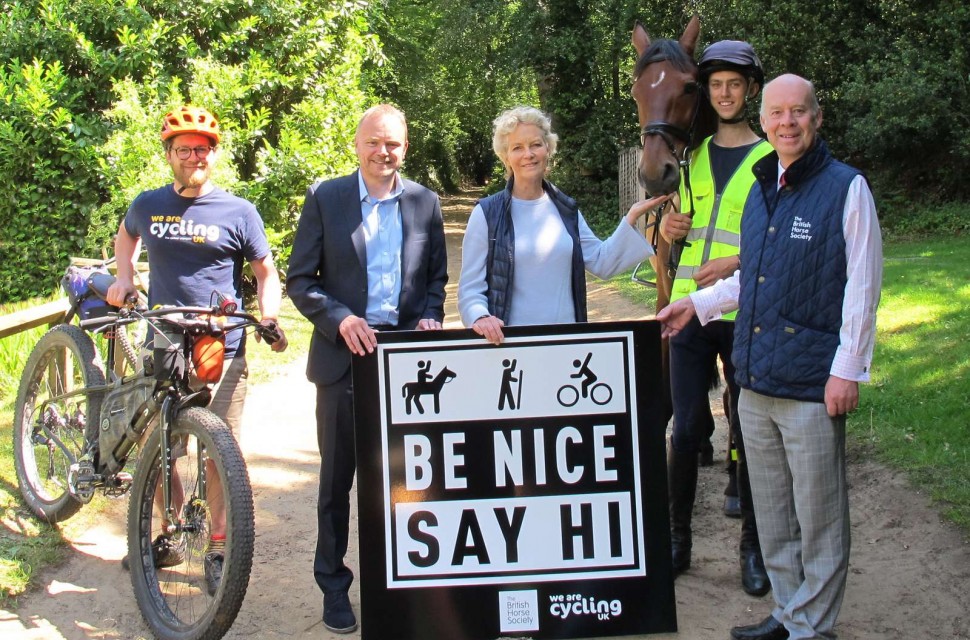 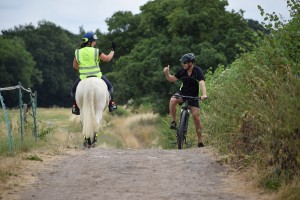 Following on from some seriously dodgy overtaking of horses, Cycling UK and The British Horse Society are launching a campaign called "Be Nice, Say Hi" that aims to promote harmony between equestrians, cyclists and other user groups.

Cycling UK and The British Horse Society have teamed up to encourage better riding near to and around horses which should improve safety for riders, horses, and cyclists.

Put simply, the scheme is asking cyclists to give a cheery "hi" when approaching horses. This alerts the horse to the cyclist's presence, making them less likely to spook. Add this to the sensible approach of passing horses wide and slowly and you should experience no problems.

The discreet message of “Be Nice, Say Hi” appearing on signposts in the Surry Hills area.

Duncan Dollimore, Cycling UK’s head of campaigns said: “Every time a cyclist encounters a horse, there are three brains involved: the cyclist’s, the rider’s and the horse’s. Many people aren’t familiar with horses, and there can be confusion on what they should do when overtaking on a bike. Cyclists may already know to pass wide and slow when it’s safe to do so – but they could still startle the horse unless the horse and rider are made aware of your presence.

“Generally, if a cyclist startles a horse, it is due to simple lack of awareness that a horse needs more time to react, which is why Cycling UK is pleased to be helping the BHS promote the consideration and courtesy message of ’Be Nice, Say Hi’ and is delighted to see it adopted in the Surrey Hills.”

Mark Weston, Director of Access at The British Horse Society said: “We are thrilled to see the Surrey Hills Area of Outstanding Beauty (AONB) adopt the ‘Be Nice, Say Hi’ initiative. As vulnerable road users, horse riders, carriage drivers and cyclists face considerable dangers on our roads and the need for safer off-road riding opportunities has never been greater.

“By promoting the courtesy and awareness message of ‘Be Nice, Say Hi’ in the Surrey Hills (AONB) we hope that more riders and cyclists will have the confidence to pass one another comfortably and safely.”

Together, the two charities have released instructional videos with examples of good practice. The advice comes not long after shocking footage appeared from a triathlon where a triathlete clipped a horse as he passed recklessly.

At the time, Cycling UK called the overtake "completely irresponsible" and said that advice would be drawn up with The British Horse Society. Iain Plumb, the cyclist that clipped the horse in the video, was subsequently given a lifetime ban from Human Race events and then found guilty of riding without due consideration.

A roadie at heart, Liam thinks anything wider than a 33mm 'cross tub is 'crazy. The inclusion of pub lunches means that he's now a big fan of gravel riding and he's also been known to do some MTB races.