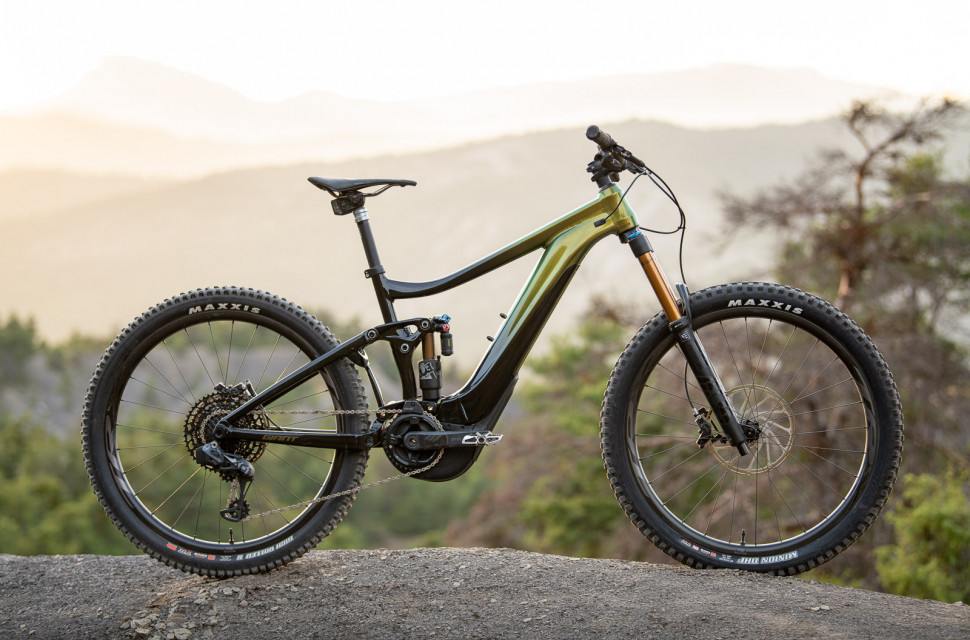 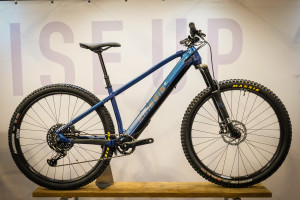 Giant's new Reign E+ long-travel e-MTB uses a drive system it's own battery and control technologies along with a Yamaha sourced motor. With polished all-in-one systems from the likes of Bosch and Shimano being used by most rivals, does forging your own path pay off? We rode the new bike at the launch in Morzine to find out.

While the focus of the new range of bikes might be on the electrical bits, at the heart of the Reign E is an aluminium chassis that sports 160mm of travel at the back from Giant's well-established Maestro multi-link suspension system paired to 170mm up at the front. It rolls on 650b wheels designed to be shod in fat tyres - 2.6" rubber is used across the range but there's clearance for 2.8" - with geometry that mostly borrows from the regular Reign, save for a few tweaks.

Giant's mastery of aluminium forming is well established, so it's not surprising that the frame is all smooth swoops and very tidy looking welds that almost have you convinced it's carbon. The downtube has Giant's own 500Wh powerpack tucked inside it, which uses high-quality Panasonic cells. The battery is built to Giant's own spec, with the individual cells widely spaced in a honeycomb-like structure that is said to improve heat management by isolating cells with a temperature imbalance, improving the time maximum current can be delivered.

While the low-hanging, somewhat pregnant looking bulge that the drive unit sits in is bulkier than Bosch's latest drive units, it'd be easy enough to mistake the Giant for a purely meat-powered machine. It very much isn't, however, with up to 80Nm of torque on offer from the Giant branded but Yamaha sourced motor, the assistance of which is limited to the usual 250W and 25kph. There have been some tweaks to improve higher-cadence support over the old unit - you can now spin to a jelly-leg inducing 170rpm should you wish - and it can now multiply rider input by up to a beefy 360%. 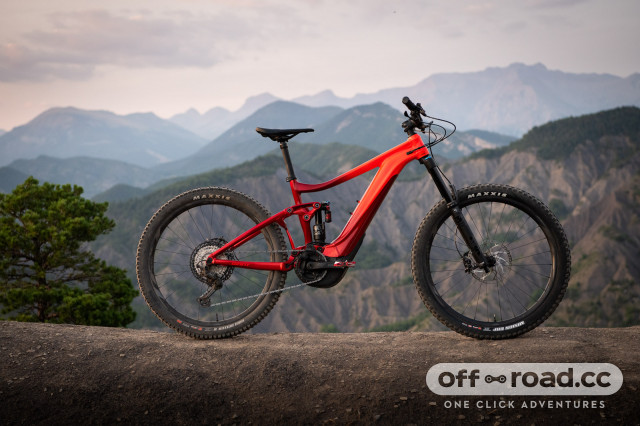 The control systems are all of Giant's own making though, with a single bar-mounted control unit that shuns LCD screens for a minimalist - though you could say basic - design that simply has LEDs that light up to show you which of the assistance modes you're in, plus another set of LEDs that show you battery level.

There's also now ANT+ capability, so if you have a compatible Garmin or similar, you can use that as a more advanced head unit that'll show you more detail on the range, assistance and many other things with the LEV protocol.

Giant's party trick is the new Smart Assist mode that uses inputs from six sensors -  including torque, cadence, slope and speed - to decide the amount of motor assistance the rider needs. They claim it gives a smoother more natural feeling as well as maximising battery life, though you do get regular 'dumb' assistance modes too.

Those range from pure economy settings - please get me home, in other words - to the Sport and Power settings that offer much more entertainment. All can be tweaked via an app, should you wish. 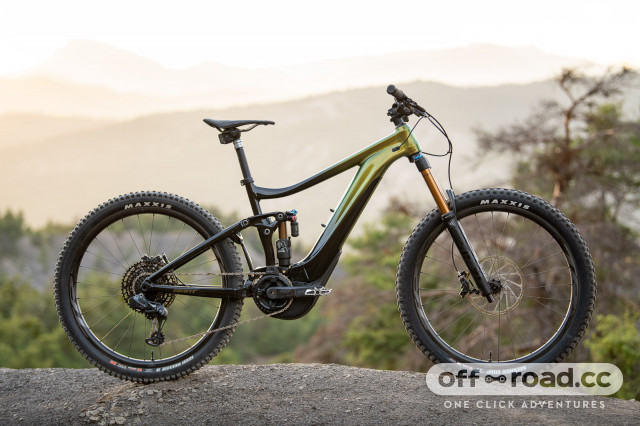 I managed to get a fairly full day around the Alpine trails in the Portes du Soleil aboard the top-of-the-line Reign E+ Pro, which, while not enough to truly get to grips with the bike, gave some firm initial impressions.

This range-topping bike costs £6,999, but you do get all the goodies, with a Fox Factory 36 with the hugely adjustable FIT GRIP2 damper, paired to a similarly Kashima coated and adjustable Float X2 at the back. SRAM's wireless and electronic AXS Eagle drivetrain is used, which offers a complete lack of cables to the derailleur, despite the bike boasting improved cable routing. There's a similarly wireless Reverb dropper post, the travel of which is size-specific; 150mm on the large. Stopping power is plentiful, thanks to Code R brakes, with a whopping 220mm rotor up front.

It's all tip-top stuff and works flawlessly, though I'm not convinced of the wisdom of such an expensive bit of kit as the AXS mech hanging off the dropout ready to meet rocks. I'm similarly doubtful about whether Giant's own carbon rims are necessary either, especially when Giant makes some excellent and lightweight aluminium rims that won't make you cry when you smash them into rocks, though they proved tough enough in Morzine's bike parks.

The bike is a pretty progressive shape; it's especially good to see a fairly steep 76-degree seat angle, which really makes a difference on the sort of steep, extended climbs an e-MTB allows you to take on and the Reign E excels at. Reach is pretty decent at 475mm for the large-sized bike I tested, which offers up some confidence-inspiring stability.

The bigger frame sizes do get longer stems, which I'm not hugely keen on - I'd rather see the shortest 40mm item across all the bikes rather than the 50mm and 60mm on large and extra-large bikes, respectively - but then I am only 172cm tall and technically a medium, so genuinely large people might get along with it just fine.

There's no getting away from the fact that the Reign E feels extremely planted; however, the dominating ride feature of the bike is the really very long 470mm (469.5mm to be accurate) chainstay, which makes the bike feel really rather ponderous and unwilling in the turns when heading downhill.

It's most noticeable when you try and ride the Reign E like an analogue bike; trying to tighten up turns by unweighting and pushing the back end mid-corner simply leads to compressed suspension rather than an enjoyable cutty. It's not really an issue when you're straight line buckaroo-ing - which the bike excels at, by the way - but tight, linked turns become more of a chore than a pleasure.

I spent a long time fiddling with the suspension on the back end to try and get a bit of pop and life into the back of the bike but that didn't help much; the long rear centre just really subdues the agility of a bike that already needs muscling about to get through twisty stuff.

It's a handling trait that was always present on the large bike I tested, but it's particularly exaggerated on the smaller sized bikes, where the back end is considerably longer than the front; the medium I tried briefly felt very unbalanced. Giant said the reason for the length is to allow clearance for extra fat 2.8" tyres, but the motor is also a fair bit bigger than Bosch's latest efforts, which can't help when it comes to packaging.

That said, it does help it when it comes to goat-like climbing tenacity and the bike is very impressive when you get off the brakes and let it run through the rough, smashing through the rough stuff with the sort of surefootedness that makes you feel a bit sorry for the rocks.

My test bike also displayed a couple of other small issues; namely that the Smart Assist didn't seem to always deliver full power, even when I definitely was giving it my all up a steep hill. Switching into Power mode made the difference apparent; maybe I'd 'trained' it incorrectly or maybe early software gremlins were to blame.

The motor was also a bit too sensitive, with the drive unit engaging and disengaging rapidly if I rested my foot on the pedal with the brake on, with a noticeable juddering effect. That's quite possibly another bit of early press bike software sickness.

Apart from that, the motor is strong and torquey merrily dispatching almost 12 hours of riding over the course of a long and entertaining day with only a single battery change over lunch. It's also worth noting that the bike can be fitted with an external 250Wh battery by using a special rail where the bottle cage sits, which offers a riposte to the lastest 625Wh internal batteries being seen on many Bosch-equipped bikes.

All in all, the Reign E is a promising big travel slugger that's certainly capable of impressive endurance and confident descending in addition to being a very capable climber. However, the long back end often made the bike feel less reactive than I'd have liked, while the drive system lacked the polish of what I've ridden from Bosch and Shimano. It's a brave move for Giant to develop their own system and it shows promise that I'm sure will pan out in the long run, but on this relatively small sampling, I'd say it needs a bit of work to compete when it comes to refinement.