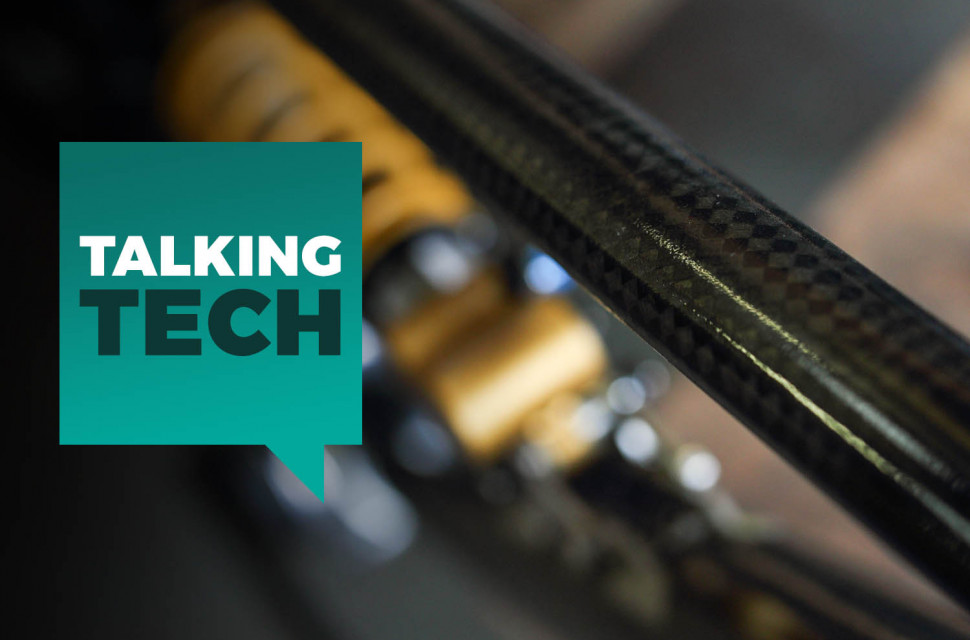 Starling Cycles is a brand with its roots planted firmly between the welds of steel but now, the small bike company is finding inspiration nestled deep within the fibres of carbon. We visited Starling HQ to chat with founder Joe McEwan about thermoplastic carbon and the new prototype e-bike. 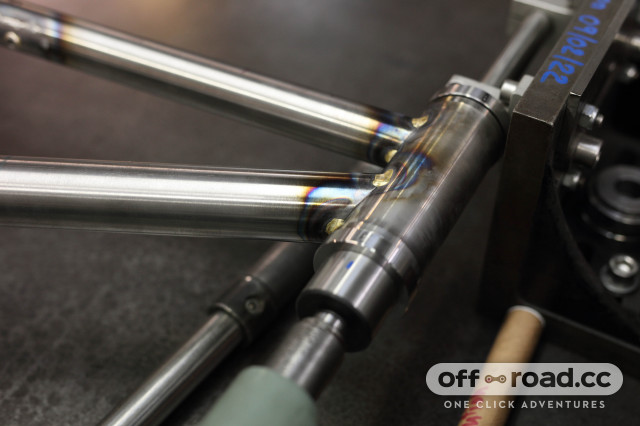 Anyone who knows Starling Cycles will know that it produces some of the prettiest hand-made steel bikes available in the UK. As a bit of a curveball, the brand has rocked the bike industry having announced and shown off a thermoplastic carbon fibre e-bike. As soon as we caught wind of the bike, we paid Joe McEwan at Starling Cycles a visit to learn more about this interesting new tech, and the prototype bike.

After a whistle-stop tour of Joe's workshop, we got down to talking about what the bike actually is, and some of its features before getting properly into thermoplastic carbon fibre and the benefits it offers. 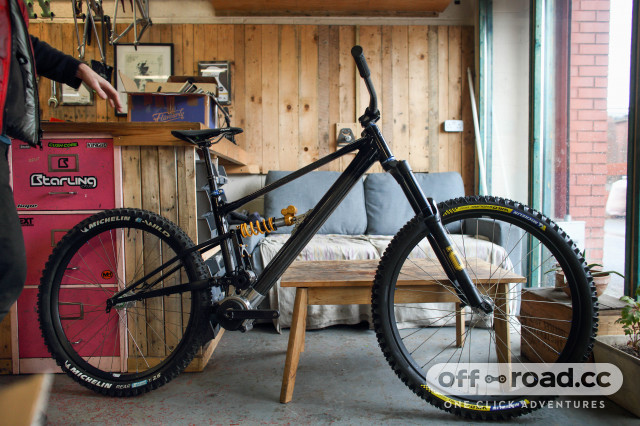 Is that a mullet wheel setup?

29” bikes lead to stretched chainstays, due to clearance for the motor, you find this with pretty much all e-bikes. While that’s nice and stable, it’s not as much fun, so that’s why we’ve put the smaller rear wheel in.

So what are we looking at geometry-wise?

Has it been inspired by any of the existing bikes?

The bike runs a Jack drive like our DH bike the Sturn. This means the swingarm is pretty much identical to our downhill bike. The nice simple straight lines keep the aesthetics like all Starling bikes. 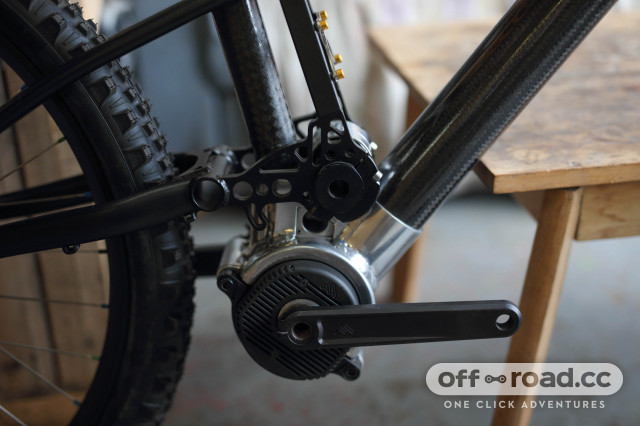 Is there any reason why you’ve chosen a Jack Drive?

I wanted to run a single pivot as I think it's the best solution. To achieve long travel, 170mm, with a single pivot, you need a high pivot position. Otherwise, the tyre quickly clashes with the seat tube during travel.

A high pivot with a conventional drivetrain gives masses of chain growth. One solution is to use an idler. This essentially puts your chain in line with pivot and reduces chain growth, but it only works in certain gearing. I think the high pivot idler thing has got a bit confused, high pivot bikes without an idler don’t work, the idler only makes the behaviour acceptable, it doesn’t necessarily make it better than a conventional drivetrain. 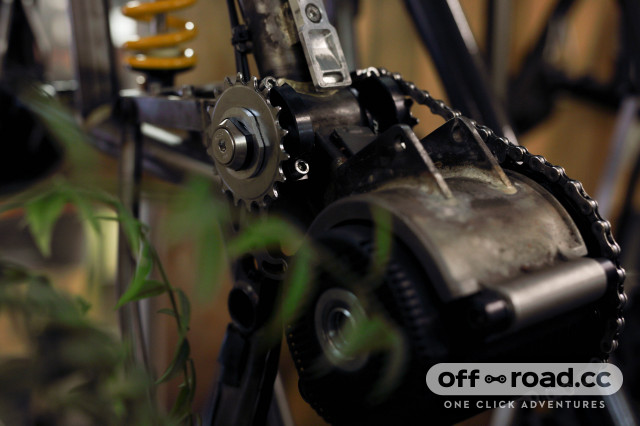 By using a Jack drive design (a Jack drive uses two chains, one from the cranks up to the pivot, and another on the other side of the bike from the pivot to the gears with a (Jack) shaft transferring drive between two sides) you remove any chain growth as the bike goes through its suspension.

You do get some chain forces affecting the suspension, the chain line is offset from the pivot by the cog radius (both front and rear), so there’s a little bob under load. But when there’s no load in the chain, when you a freewheeling, the suspension is as free as it can be.

Another benefit of my design is that the main pivot bearings are always rotating, so you don’t develop the notchiness in suspension bearings that small angles rotation in suspension give. So yeah, the Jack Drive makes sense but it was a little bit complicated for the motor company because they had to switch everything around as it’s running the motor backwards. They just had to change the clutch and I think some wiring.

How are you going about powering the bike?

So the battery will go in the downtube. I think it’s around 80mm internal and because it’s quite a long downtube there’s plenty of space to get batteries in there. But realistically, this bike is a couple of years away from manufacture and battery technology will have reduced in size and weight by that time. So, I’m pretty confident we can get enough batteries in the bike.

What capacity is the battery?

I think we can fit up to a 500[Wh] in there because we can use the length [of the downtube] we’ll just need to change the battery shape and configure it properly.

Is this bike something that you’re going to try and produce?

That’s kind of not the point of this project. Nominally it is an e-bike but what we’re really looking at is the manufacturing technology rather than anything else.

What can you tell us about that?

So it’s a braided carbon fibre tube that comes off a rope making machine which basically weaves it as it comes out. It’s also ‘co-mingled’ so it actually has nylon in with the carbon fibre as it’s knitted. It comes out as a dry sock, then you stick it in a tool, heat it up, the nylon melts and that soaks into all of the carbon fibres. 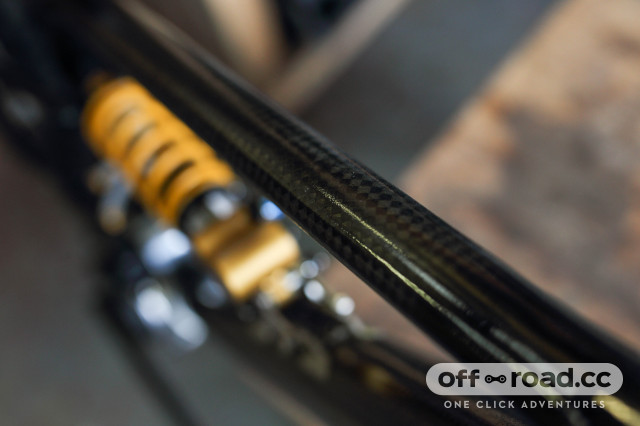 So that’s the ‘thermoplastic’ of it?

A thermoplastic can be repaired. You can potentially just put a patch on, put a local bit of tooling over it, heat it up and that patch will be fixed on. It also means that when this comes to the end of its life, you could, for example, cut the top tube out, stick it into a bit of tooling and turn it into a mudguard with very little effort at all. Or you could chop it out and use it on a smaller sized bike.

This thermoplastic isn’t totally recyclable, but it can be used for much higher grade stuff than epoxy-based composite. Typically thermoset composites are just chopped up and used as non-structural filler.

What’s motivated you to go towards this method of manufacture?

Well, because I was offered the opportunity to!

In my previous job, I was an aerospace engineer and I did quite a lot of time in carbon fibre R&D. I spent a few years working at the National Composites Centre (a government funded R&D facility in Bristol) and one of my ex-colleagues contacted me saying ‘we’ve got this opportunity to develop a new process, it’s really suitable for making bikes out of, do you want to be the industry partner?’ So, I got involved that way.

It was actually an environmentally driven funding call, with the thinking being, it’s lower energy to produce a thermoplastic composite than an epoxy-based one. There are plenty of other properties that make it less environmentally damaging than epoxy composites too. 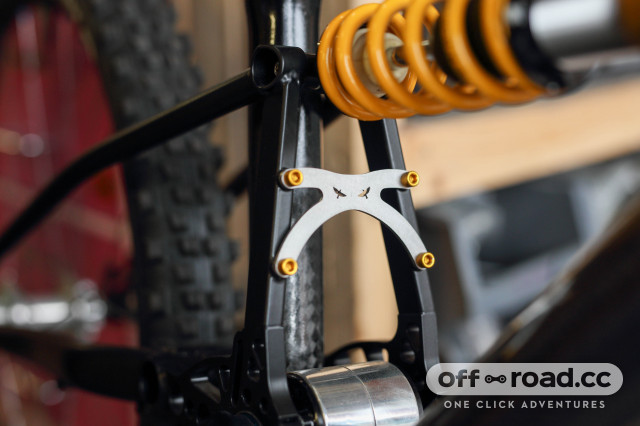 With epoxy, if you whack it you can get a certain behaviour, in aerospace it was called BVID (Barely Visible Impact Damage), where after an impact, it might get a little scratch on the outside but all of the layers of carbon fibre inside have delaminated and the epoxy has failed, causing it to lose much of its strength. Whereas thermoplastic absorbs a lot more energy and you don’t get that kind of failure. So it’s a lot tougher to impact resistance.

The manufacturing process that we’re trying to come up with is also more ‘inspectable’, so you can check that all the constituent parts are good before you assemble it into a final frame. Whereas at the moment, the way they make bikes is that they shove a load of carbon fibre into a mould and they try to do loads of crazy things where they fold it over and make weird stuff happen and it’s got internal bagging and if it works, it works and if it doesn’t, it doesn’t. For example, if they have a bag split, it’s gone. So there’s a high scrap rate whereas, with this, we can inspect it upfront, so its scrap rate should be a lot lower.

We’ve also talked about the repairability, which helps prolong the life of the frame. To me the best way to reduce environmental damage is to make things that last a long time; Reduce, Repair, Recycle in that order… So while it’s not as environmentally sound as making bikes out of steel, if people are going to keep buying carbon bikes then this is a better option. 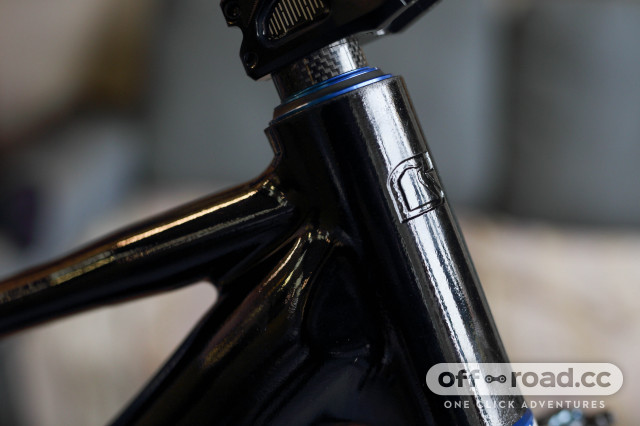 So bonding carbon to lugs is something that you’re going to stick with?

Is that because it’s easier to manufacture?

Yes, so the whole idea of this is not necessarily performance driven but it's better for the environment and it’s driven by manufacturing. Essentially we’re trying to come up with a better carbon fibre manufacturing process.

Are there any difficulties that you’ve come across while designing this process?

The braided tubes, that’s a technology that exists. But with the lugs, what we’re doing is new and novel. With that, there are lots of details to be solved.

We’ve seen thermoplastics on bikes like the GT STS that was known for having a lot of issues with cracking is this something you’ll be able to beat?

I don’t know what the problem with the GT was but it had a whole load of aluminium lugs, so I think it’s more a problem with that. It was probably the bonding of carbon to aluminium. Bonding two different materials together is really difficult. 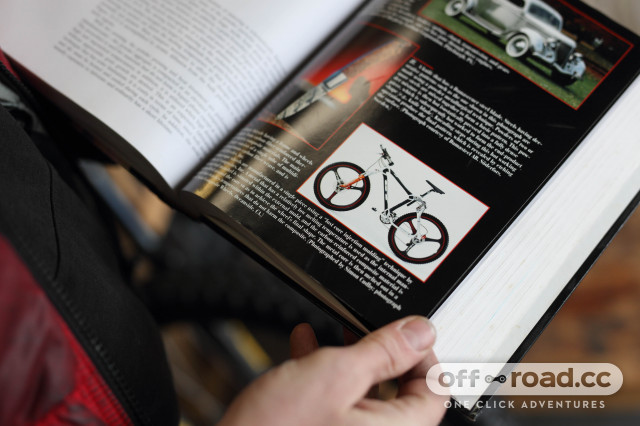 So how does this manufacturing process compare to say, Atherton bike’s?

Atherton’s are titanium lugs whereas ours are composite.

If you could categorise this bike (trail, enduro, etc), what would it be?

Well it’s an e-bike! But this technology can be used on absolutely any bike. In fact, we’ve been looking at using it with kids bikes. I got an idea for a kids bike and this technology really lends itself to that. Any kind of mountain bike, any kind of road bike. This is a manufacturing process, it’s not a specific bike. It just happens that we’ve done this e-bike as a vehicle to try out the technology.

Is there scope for this method of manufacturing to be a bit cheaper than traditional carbon?

So typically, we talk about time, cost and quality, and you can only have two of them. Hopefully, with this manufacturing process, it’ll be quicker, it’ll be cheaper and it’ll be better. But it’s still relatively immature.

Is there anything else special about this bike?

This bike also has a 3D printed, stainless steel shock mount which lets us play with the geometry a little bit. The fact it’s 3D printed has let us put a little bird on it. 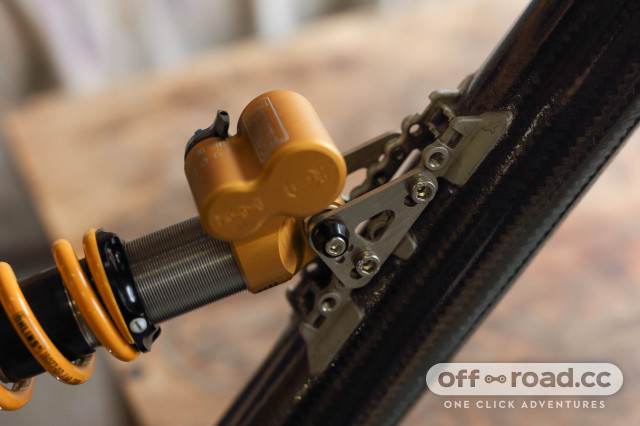 Will it be a long time before we see something like this in production?

Yeah, it needs a chunk of money. I’m talking to some potential partners but ideally, I need a big partner to get this going.

In a workshop with steel frames draped over almost every wall, it's definitely interesting to see a brand step slightly out of its comfort zone to find a more environmentally friendly method of manufacturing carbon fibre frames. If we hear any news and updates on this project, we'll be sure to keep you updated. Joe and his team deserve a massive thanks for showing me around the workshop and chatting to me about this exciting new tech.