Skip to main content
Log In Register
Titanium bikes may well be more expensive and less popular than alternatives, but once you’ve ridden one it’s hard to turn back. 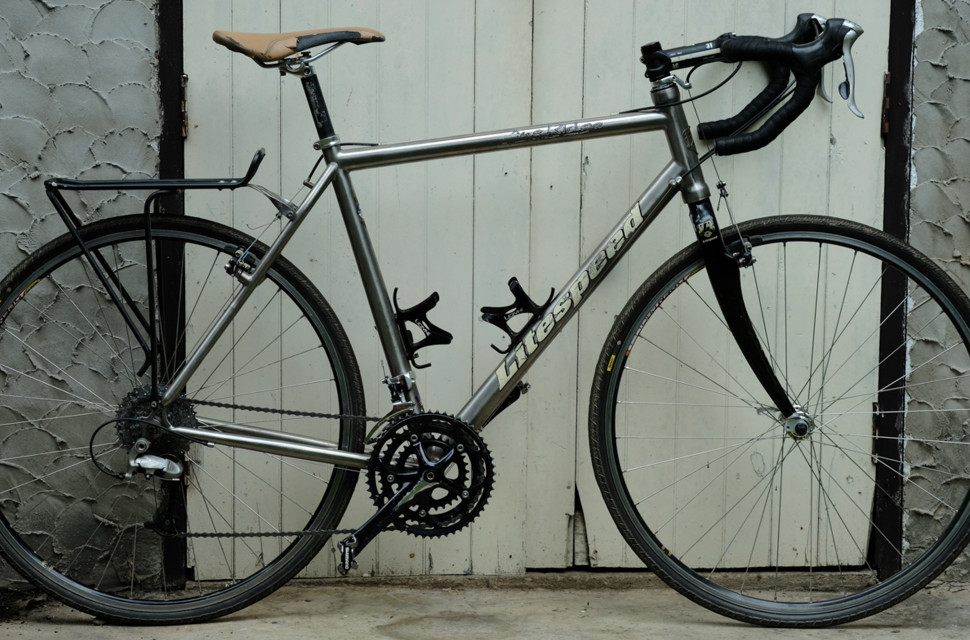 Titanium has been used in bike frames and parts for many years and was a prized and rare commodity in the early years of mountain biking. Some top professional riders of the early 90s even had their own titanium frames made and painted with their sponsor's livery, as there were very few titanium frame builders around, and it wasn't possible to get them through sponsors.

My first encounter with the magical frame-making ingredient was during the mid-90s when Raleigh found a reliable stock of well-priced titanium. They initially started using this with their bonded Dynatech and M-Trax frames, which I rode for many years.

What is titanium all about 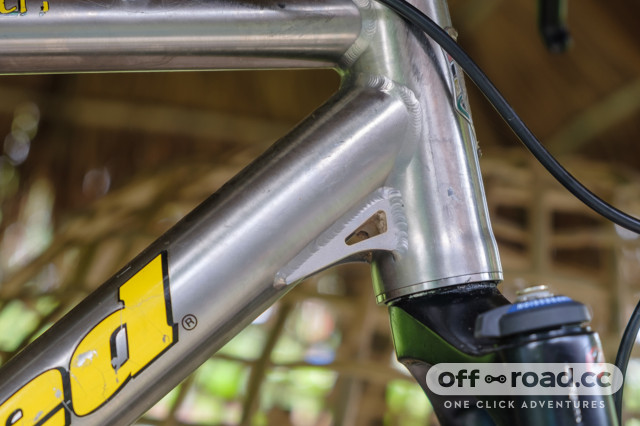 Titanium (Ti) is a chemical element that is extracted for ore. It was first discovered in Cornwall back in 1791. The material is very light and strong and is highly corrosion-resistant. It is widely used in the aircraft and aerospace industries.

It's mostly alloyed with other materials, and when it comes to bike frames and parts, those are generally aluminium and vanadium, which are alloyed in different amounts to give the tubes different characteristics.

Titanium frames are generally very light (a little heavier than some carbon frames) and highly durable and offer a fairly absorbent ride.

Although you do see titanium forks around, most gravel bikes will have carbon forks to keep the weight down.

Most titanium frames are TIG (tungsten inert gas) welded. This process involves a heated element that reacts to oxygen. It requires great care and an inert environment to build the frames, which is very time consuming and costly to do. This is largely why titanium frames are comparatively expensive, as mass production is difficult to achieve.

The early Raleigh frames I rode skirted this process as the tubes were bonded into the lugs. Although they felt light and comfortable to ride at the time, stepping back on one now is a bit like straddling a farm gate. This somewhat negated the ride sensation of the prized titanium, but this was more down to the geometry of those early mountain bikes rather than the material used. This is something that you may well sense when stepping back from a modern frame to any number of bikes from that early off-road era. However, their early 90s geometry does make them pretty well suited to gravel conversion and riding, perhaps more so than technical trails, at least when compared to recent MTB frame designs. 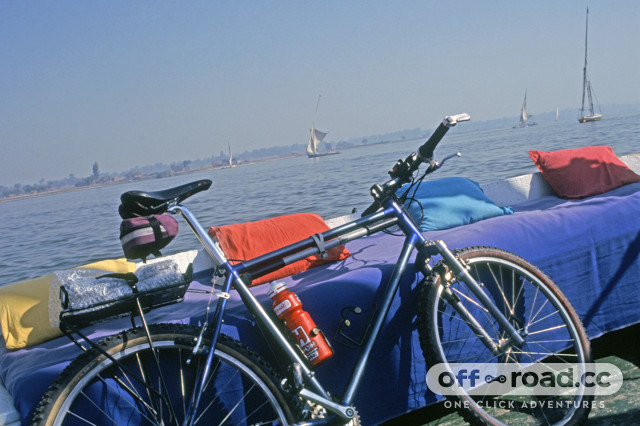 A few years down the line, Raleigh somehow managed to produce a range of welded and polished titanium frames at a very good price point. I classify this as my first true experience of riding a titanium bike. Titanium tubes are pound for pound much lighter than steel equivalents and are far more durable and resilient than either steel or aluminium frames.

The ride sensation of those first welded titanium bikes was like nothing else I'd ever experienced. They were pure and simple looking, were more robust than any frame material I'd ever used, and the compliance and comfort levels of the ride was superbly dialled.

Titanium seems to soak up a fair amount of the rough stuff while fully maintaining its precision in handling. Titanium frames are bombproof; they do not corrode, so they last for years without losing their ride qualities. I've never had any fear of damaging any of my titanium frames or worried about having one break (apart from the carbon forks, that is).

I sold those early bikes a few years ago, and I know at least one is still in regular off-road use and has lost none of its classic curvy looks. Oh, how I wish I'd kept hold of one, but I didn't.

For a few years after that, I followed the carbon and aluminium trail, but as nice as carbon fibre may be, I never found it to ride anything like my old titanium frames, and it certainly doesn't have the same level of durability.

The return of Ti 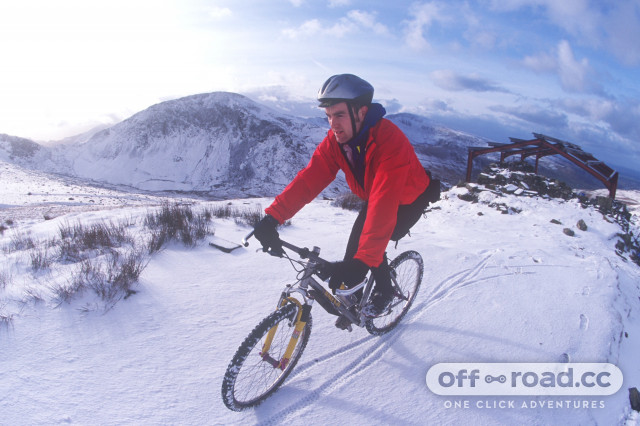 Luckily I got hold of a Litespeed Blue Ridge touring/cyclocross frame (now used for gravel) and a Lookout Mountain MTB frame in the early 00s. It was like slipping back into a comfy and trusted pair of slippers, only much better. Those frames are nearing 20 years old now. They may well be dated, with 26-inch wheels on the mountain bike and no discs on the gravel bike, but they have lost absolutely none of their ride quality.

These bikes have travelled the world non-stop for two decades now and have been used to the extreme. The decals may be scratched, the parts have come and gone, the forks have been obliterated (carbon on the gravel bike), but the frame remains as robust and as sweet and gentle to ride as it did on day one. 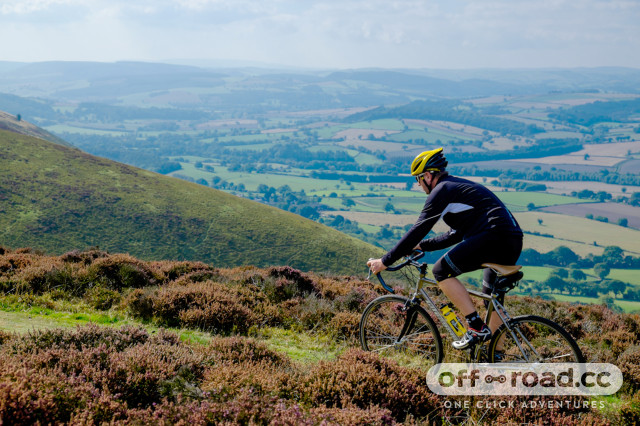 Other mountain and gravel bikes have also come and gone during that time when buying a new bike was cheaper and more convenient than a refurb with new forks and a groupset. Still, not a single one of them has had anything approaching that familiar titanium ride sensation that I appreciate so much.

There are now many more titanium bike options out there, which are pretty affordable when you factor in their longevity and durability. My old bikes are perhaps a bit long in the tooth, and at some point, I will invest in a bigger-wheeled titanium mountain bike frame and also in a gravel frame with discs – when the world evens out.

If you have a titanium bike, you probably know exactly what I'm talking about. If you don't, and if you're in the market for a new ride, I highly recommend at least trying a titanium frame off-road. A word of warning, though: it will be hard to turn back to other frame materials if you ride one long enough.

Hell, I love the stuff so much that I even have a titanium plate and screws in my collarbone.

"Titanium frames are bombproof; […] I've never had any fear of damaging any of my titanium frames or worried about having one break"

They can break all too easily if poorly made, and poorly made can include many of the cheaper mass-produced Ti frames sold by 'household' names. Even if you don't know anyone who's broken one personally, a cursory search of cycling forums or the broader web will return myriad broken frames.

And I'm pointing this as someone who does have a Ti bike and loves the way it rides.