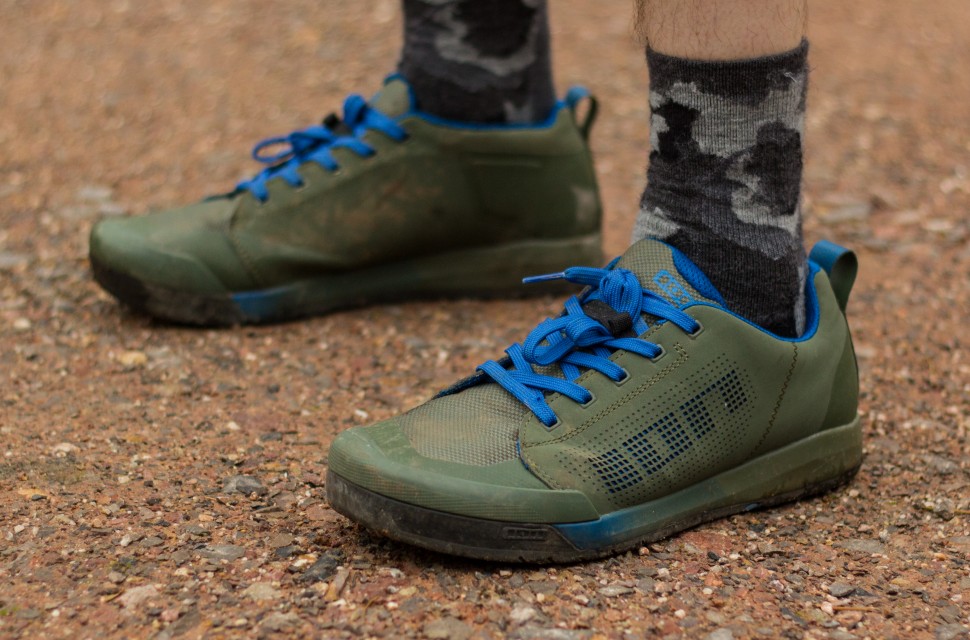 Adam Wight
|
May 31 2018
|
Overall
Quality
Performance
Value
What's good?
What's not?
Buy if...
You like a stiff shoe with good power delivery a high levels of traction

The Ion Raid Amp flat pedal shoes have the characteristic 'surf inspired' feel from Ion whilst proving to be a capable, well priced flat pedal if you like your shoe stiff and your soles sticky.

Winter is on its way and the trails are already getting sloppy, rutting season is upon us! Some of you will be flat pedal purveyors all year round whereas I tend to chop and change depending on the weather and prevailing conditions. However, once winter arrives, I like to get back on flats for the duration. So, what perfect timing it was when the new Ion Raid Amp shoes dropped on the desk. 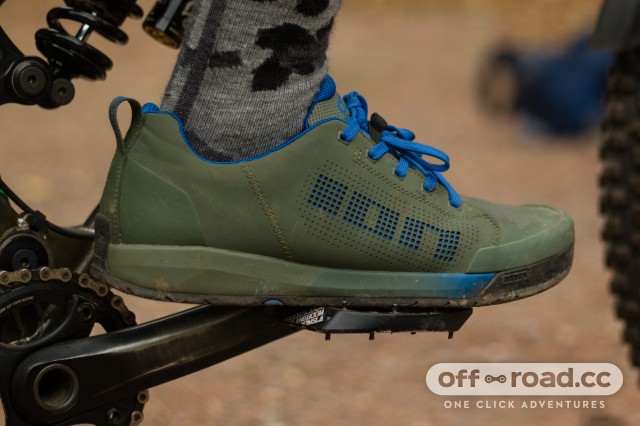 The Raid Amp's come in two colourways - woodland green with blue accents (as tested) and black with red bits. Both look cool and clean, styling is always a strong point for Ion. They use a 100% faux leather upper and in Ion’s words, a 100% secret SupTraction Rubber Soul FL sole! As is traditional with riding shoes, the upper is higher on the ankle side to protect your, errr, ankle bone from the cranks and there’s a highly reinforced toe cap for those inevitable rock punts. The toe cap works well, I inadvertently used said cap of the left foot to boot a massive tree stump on the first ride out and although I endured a bruised toe, it would have been a lot worse without it. Nothing like real-world testing, gulp! 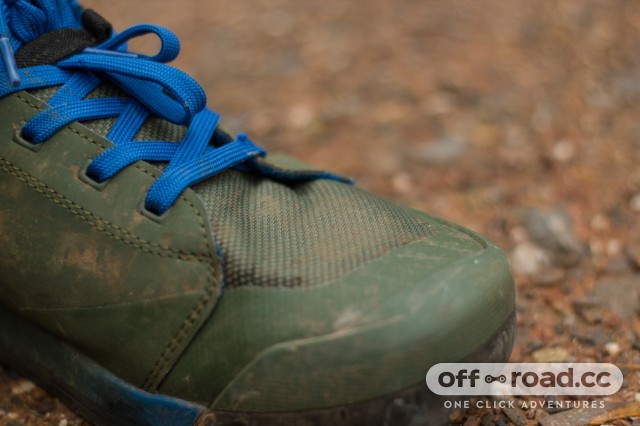 Ion are calling their insole the 2C Insole, stating that two components are at play providing arch support and damping of the foot pads for increased support and comfort. I can’t comment on exactly what’s doing what, but they really are all day cosy without being too hot, most likely due in part to the laser cut ventilation on the upper. I’ve used them in the wet a fair few times as well and they don’t leak like a sieve either which is a bonus. 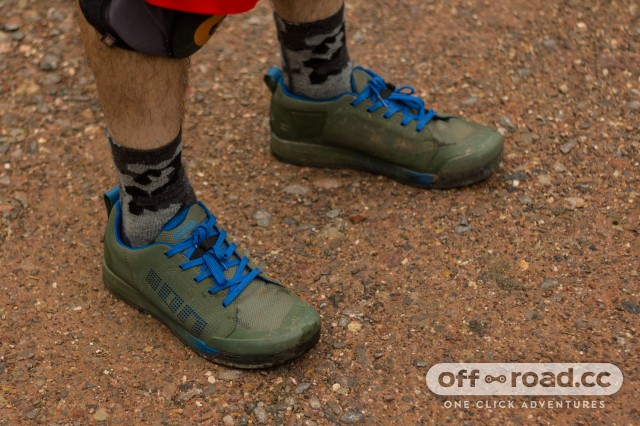 Laces are always a bone of contention on riding shoes, I get they have to exist but often they’re awkward and lack adjustment. The Raid_Amp’s uppers are quite stiff meaning there’s less emphasis and requirement for the laces to offer all of the support when tightening them up. The standard system works fine and a handy lace loop keeps them neat and tucked away when riding. 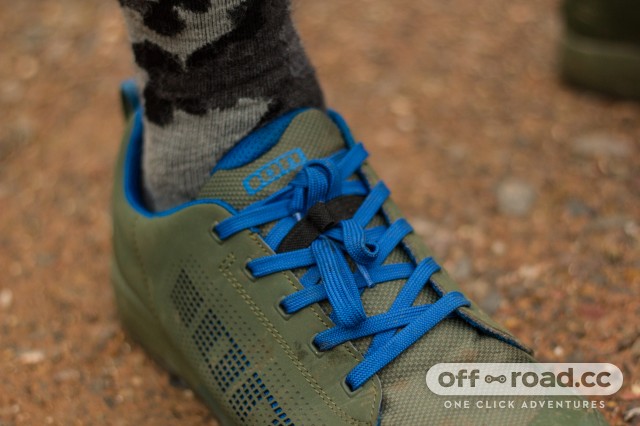 The secret compound ‘suptraction_rubber soul’ Ion are using has distinct areas designed for their chosen tasks. The front and the rear use laterally angled rubber ridges for grip when climbing or descending when off the bike, and the remaining central waffle-type platform is for pedal traction. 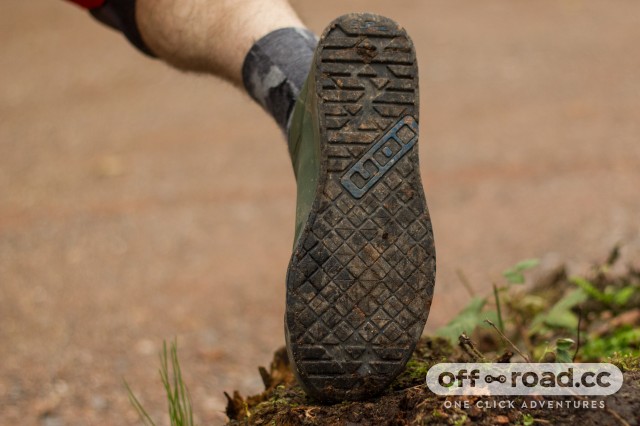 Now, I know what you’re all thinking - ‘Yeah yeah, are they grippy like FiveTens? The simple answer is no, but bear with me here, its not a bad thing. The sole is definitely less tacky than a FiveTen comparably, however off the bike they’re a fair bit better and on the bike they allow for movement and micro adjustments without that feeling of being glued in position. They’re a pretty stiff construction which took a bit of getting used to, but after wearing them for a whole day at a trade show, I won the breaking in battle and they’ve been super comfy ever since. The stiffness does mean power delivery is noticeably improved over some of the competition, something only a few will care about but what it does mean is that a long day in the saddle doesn’t result in fatigued tootsies. 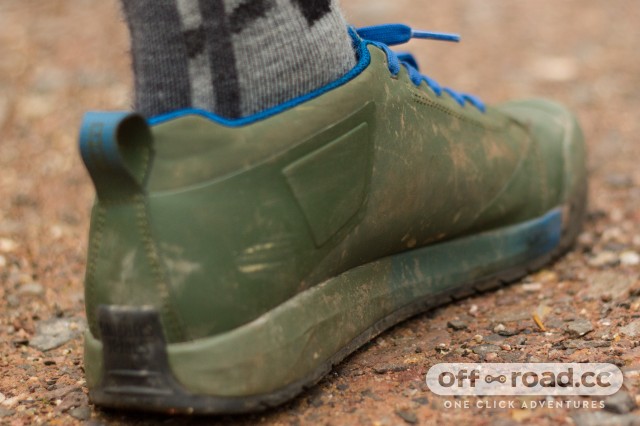 At 863g for the pair of my size 45’s (including some dried mud) and £89.99 they’re a reasonable weight and price too. A genuine contender for that other well-known shoe company, and if Ion’s other product durability is anything to go by, they’ll likely last longer too.