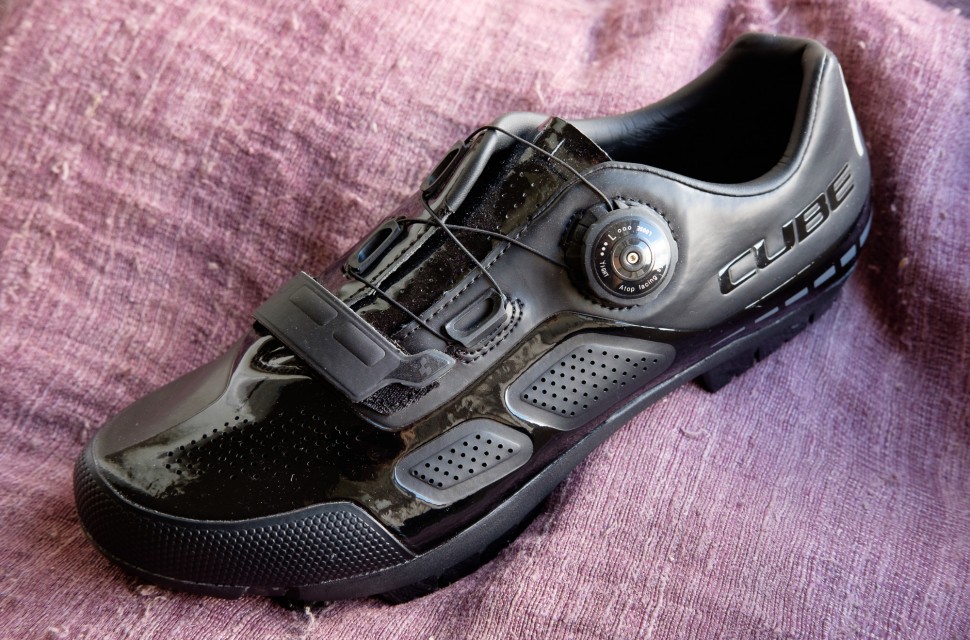 Benedict Pfender
|
Dec 9 2017
|
Overall
Quality
Performance
Value
What's good?
What's not?
Buy if...
You want a racing shoe at a very reasonable price. Consider carefully whether the compromises are worth it though.

Cube's C:62 shoes are their top of the line mountain bike race slippers, with a thick and stiff carbon sole and unique look, plus a competitive price tag. However, I didn't get on with the fit at all and, personal preference aside, there are some design niggles that hold them back.

My first impressions were good. I think the one piece, two-tone upper looks attractive and is moulded nicely. The unfussy design is easy to clean and I imagine it sheds mud relatively well – though I didn’t get to test this in practice. There’s not an obscene number of vents, though, as usual I am sceptical about the toe vent – I find this usually lets more water in than it lets moisture out. 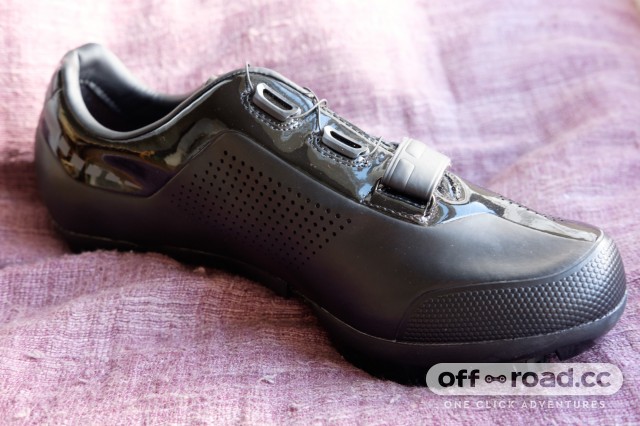 On the whole, the last fits my foot very well, with enough room in the toe box for my relatively wide feet. The quality of construction is also high. A standout feature for me is the subtly integrated cats-tongue gripper material on the inside of the heel. It seems less aggressive than the material some other brands use and is barely visible unless you look closely. The toe box is also reassuringly solid and has protected me from one or two stubbed toes.

Finally, the sole is undoubtedly stiff. With Cube’s highest stiffness rating of 300, there is very little if any discernible flex in the sole. However, the sole is also visibly thick and I am sure this adds to the weight of the shoes, which are definitely among the heavier I have tried in recent times. Out of the box, the carbon sole is very pretty to look at, though it gets scuffed up quickly in use. 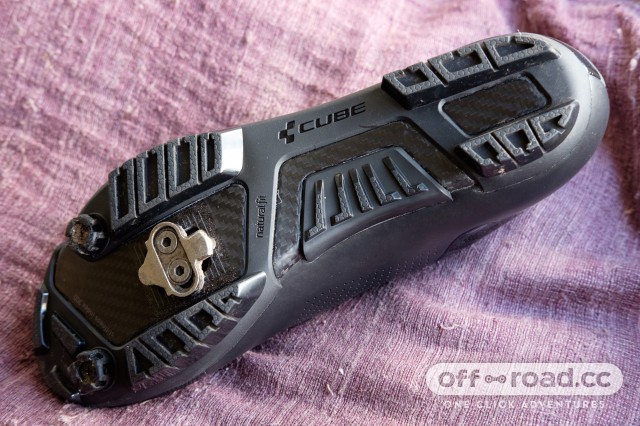 Whilst the sole has rubber everywhere I would expect, this is where I start to find issues with these shoes. The tread feels more like hard plastic than grippy rubber, which, especially on harder surfaces, ends up with your feet feeling like they are about to skate away. This isn’t helped by the two plastic toe spike mounts, which are the only thing you support your weight on when you roll your foot forwards. I accept that these have a stiff sole, but I have had significantly easier walking shoes in the past.

I haven’t tested them in thick mud, but to me the tread pattern doesn’t look open enough to shed mud effectively and is likely just to get clogged up. In addition, the channel around the cleats is either too narrow or the lugs cut too high. In any case I wasn’t actually able to clip in on my Shimano “trail” style pedals. 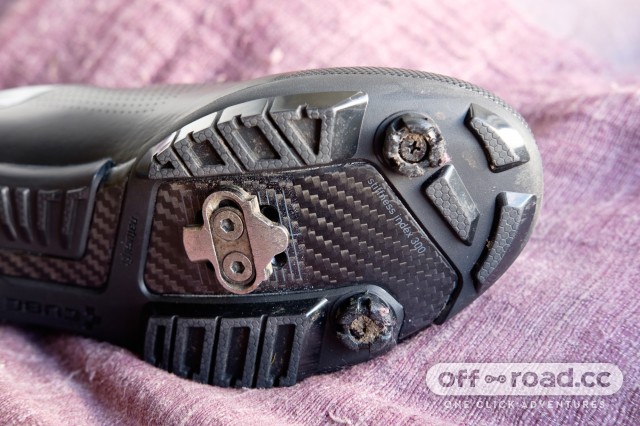 Whilst I was able to clip in with platformless SPDs, the float still felt stiff – I assume because of friction or interference with the tread. It would probably be possible to fit shims underneath the cleats; I don’t want to have to faff with this when I have never had this issue with any shoes before these. I also noticed that I tended to miss clipping-in a little too often, possibly a factor of it being difficult and the relatively short cleat channel providing less guidance.

It’s the fastening system of the shoe where I have the most problems and my biggest issue here is the placement of the laces for the ratchet system. Though they look to be offset slightly from centre, I found the inner set of lace hooks sat directly on top of my foot, causing uncomfortable pressure points as soon as the shoes were tightened. I also found the outside of the ankles cut slightly too high, causing some discomfort here.

Now I will happily admit that I have a relatively high (and also sensitive) instep, but I think the problem is exacerbated by the rather “lumpy” lace hooks. Just a little more padding underneath them, or even on the shoe’s tongue would probably help alleviate this problem. 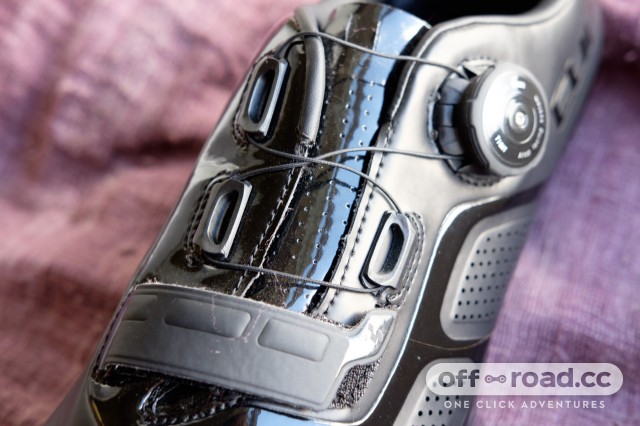 Whilst I’ve been able to grin and bear it for the shorter training rides I’ve been doing with these shoes, I wouldn’t want to have to deal with this for a whole day’s riding. Of course your results may vary and it is worth trying them on for yourself to see if this is an issue. That said, apart from this (rather significant issue) I did find the shoes very supportive during rides – as mentioned I like the basic last of the shoe, but the lacing just doesn’t work for me.

The shoes use ATOP dials which, in use, I don’t feel have the same level of refinement as some competitors. It’s only possible to tighten this dial incrementally, releasing it lets out the laces completely making on-the-fly adjustments slightly more difficult. It's also too easy to release the dials - on one occasion they caught on some plants whilst riding and just released completely. I’m also not sure that the dials have the same degree of micro-adjustment capability as competitors. 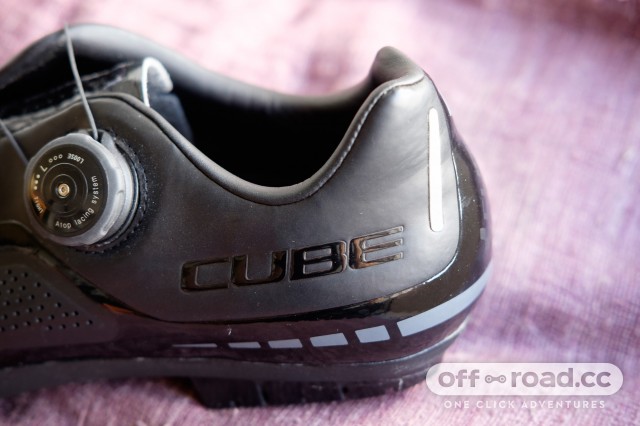 The dials themselves don’t feel particularly premium. They have collected dirt and grit worryingly quickly and now feel quite rough when adjusting. I’m also not completely convinced by their durability – they seem a little more exposed and bulbous than other dials I have used and the soft silicone grip around the edges has started peeling off significantly already.

These are definitely marketed as high-performance shoes and if you find the fit works for you then there may be more to recommend them. The C:62 range is targeted at racing, and looking at comparable shoes on the market, at £170 they are very competitively priced. However, beware that this comes with some compromises that personally, I’m not sure I would be willing to make.