Skip to main content
Log In Register
2021 DMT KM4 shoes review £170.00
Comfortable and airy with knit construction that stands them apart from others 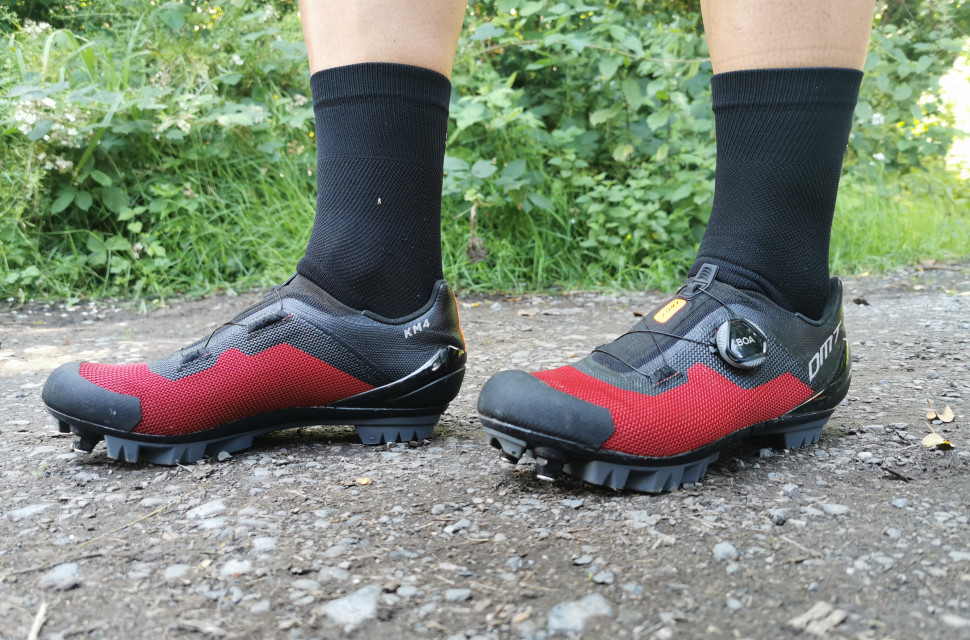 If you value comfort over pedalling performance, the DMT KM4 shoes offer a knit construction upper that allows impressive comfort through its flexible material. The flex in the sole makes them best suited to trail and general riding rather than racing. In hot weather, comfort is further improved by the generous airflow this knit fabric allows. The downside is that water also passes through like a sock.​

DMT has committed to the knit construction with all models in the line-up they produce of both road and off-road shoes featuring the knit construction in some way. The KM4 is the lowest in the range of Gravel/XC shoes, although by no means a budget model at £170. The upper of the shoes are constructed with a 3D knit fabric, which is extremely impressive. The best way to describe it is like wearing a sock, but with a built-in sole. 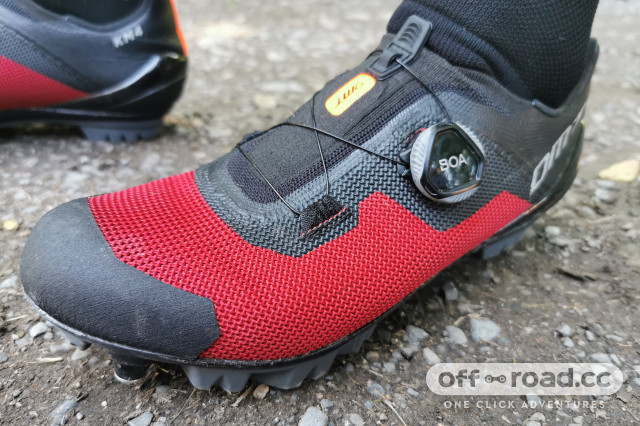 In terms of fit, DMT shoes are longer than many others. If you are unable to try a set before purchasing, DMT provides a list of EU/UK/US sizing as well as each of its sizes in centimetres. I would recommend referring to that and measuring your feet. Compared to other shoes I have, including Bont, Specialized, and Shimano, the length comes up at least one EU size larger, so I have chosen one EU smaller in the DMTs as a result.

The width is typically narrow for Italian branded shoes, being similar to Giro, Fizik or SIDI but while I normally struggle with those brands, the knit fabric on the KM4 gives vastly more flexibility in the upper, allowing the material to conform to the shape of your foot, as well as giving more freedom to move within them. As a result, they are incredibly comfortable. 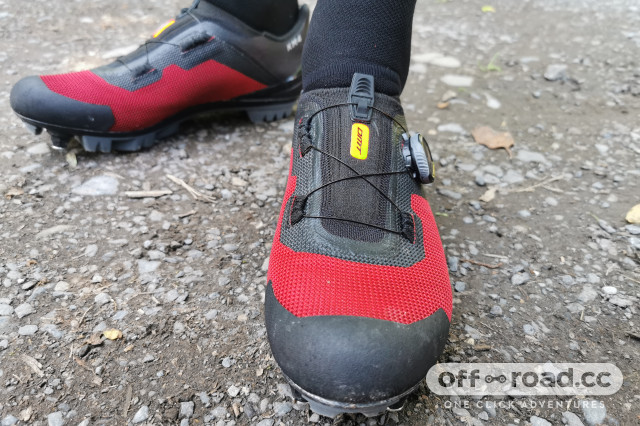 When brand new, there is some tightness, but it only takes a couple of rides before the DMT KM4 shoes loosen and become easy to slip on. Tightening is done by a single Boa L6 dial with indexed tightening. My only gripe would be that the tension cannot be backed off gradually. Instead, you must pull up the dial to release all the tension on the Boa, push it back down and start again. This can occasionally be frustrating when trying to dial in an exact tension, although compared to using the same dial on other footwear with less forgiving upper materials, this is less of an issue.

The key to this comfort is the high degree of flexibility and movement in the knit construction. Even with the Boa tightened, I was still able to move my foot around – particularly side-to-side. This lateral movement is impossible to eradicate, regardless of how tight you tension the Boa. For general riding, the movement does not cause any problems and can improve comfort. The movement can sometimes feel disadvantageous for more intense riding or racing, especially if you use your feet to help manoeuvre the bike around beneath you while cornering. 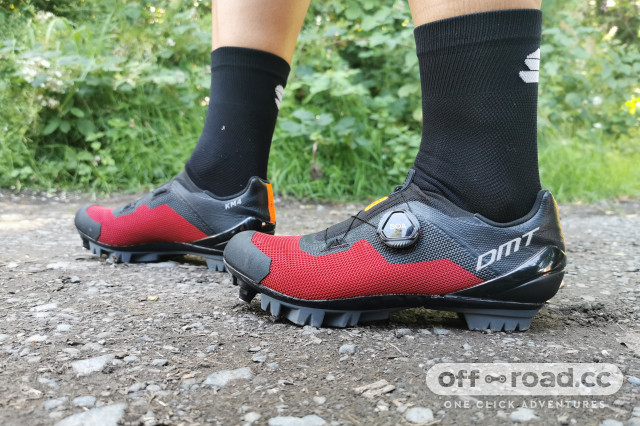 The sole is a composite material that isn't as flexible as casual footwear but does have more flex than a carbon sole, especially around the forefront and ball of the foot. This flex makes them comfortable and easy to walk in, which is ideal if you often venture up steeper trails. At 596g for a pair, without cleats in size 40, they are lightweight compared to performance shoes. The front of the sole is threaded, and studs are included, which will be good for hike-a-bike, seriously muddy terrain or cyclocross events.

The insole provided is basic, and the sole is also very flat compared to some other brands – particularly Specialized with its Body Geometry insoles. There are no optional insole inserts either, which some brands offer to improve the fit. As someone who struggles with foot issues, I would look to replace the insoles to further improve the comfort. 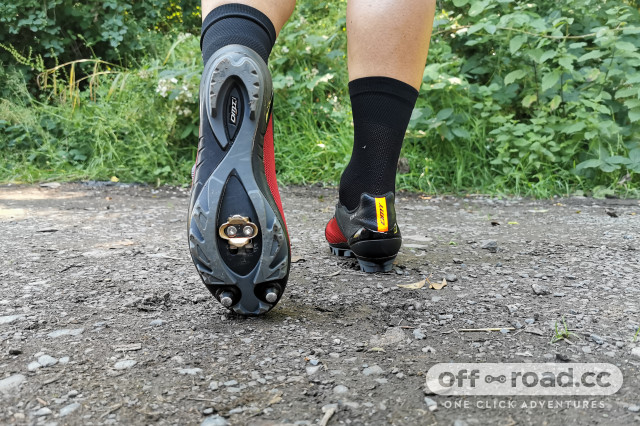 The knit fabric allows huge amounts of air to pass through and although during testing, I have used them on multiple days where temperatures have moved into the mid-20's, at no point did my feet feel hot, even on the sole, as can occasionally happen with other footwear. The opposite is likely to be the case in colder weather. While I have not used them on cold days, having tested a pair of road DMT KR3 shoes with a similar knit construction, I can confirm they will feel far colder than most shoes in cooler weather.

The fabric also means that water passes through easily, so your feet will get wetter, more quickly than other footwear with more typical upper construction. This is likely to be less of an issue through summer, but moving into Autumn and Winter, I expect to be using overshoes earlier than normal. 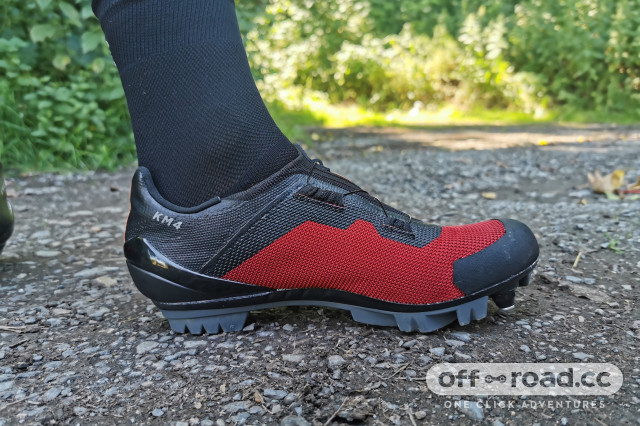 Although not in the highest price bracket, the KM4 shoe's £170 price point puts them in the company of other high-performance shoes, including the Specialized Recon 2.0 at £175 and SIDI Trace 2. As well as sharing the same price, both these models share a similar single-dial or Boa closure system, although neither has a knit construction. There are other, more race-orientated shoes, featuring stiffer carbon soles for similar or less money, such as the Bont Riot+ MTB shoes at £170, which have proven to be comfortable and durable as well as more efficient for pedalling.

The 3D knit construction of the DMT KM4 shoes is what stands them apart from others, with the flexibility in the upper translating to a high degree of comfort, which is continued in the sole, where there is enough flex to make walking comfortable. Huge airflow through the upper makes them perfect for warmer days but counts against them for cold or rainy days. They are priced among other high tier models, but none can match the amount of flexibility in the upper that the DMT KM4 offers, which alone will make the DMT KM4 shoes a perfect choice for some.