Skip to main content
Log In Register
Rockrider ST 900 2020 review £600.00
A great value bike that's got some really good kit for the money, but serious mountain bikers will find the handling nervous 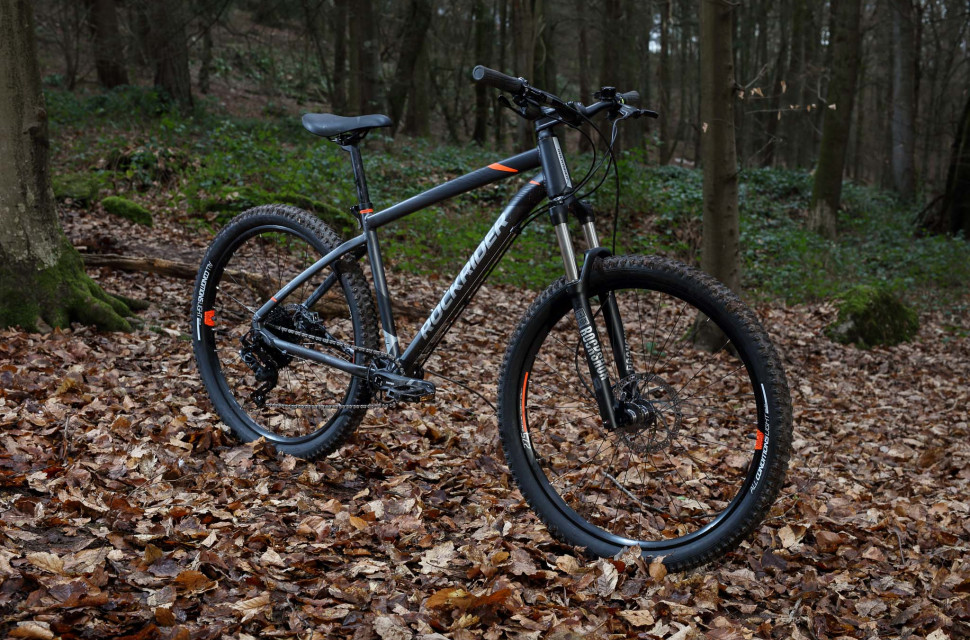 Jon Woodhouse
|
Jul 7 2020
|
Overall
Quality
Performance
Value
What's good?
What's not?
Buy if...
You want an excellent value bike for the softer side of off-road riding

Rockrider is Decathlon's mountain bike brand and this ST900 hardtail delivers up all the value we've come to expect, with a single ring, 11-speed wide-range drivetrain, RockShox fork and proper hydraulic brakes for not a lot of cash. That's all great, but true mountain biking ability is undermined by steep and short geometry, making this best left to those who prefer more gentle off-road adventures.

At the heart of the ST900 is an aluminium frame that gets some clever touches that aren't always seen on a bike at this sort of money. The tubing changes thickness along its length to reduce weight in a process known as double butting, while the fork has a steerer tube that tapers from a smaller diameter at the top to a bigger one at the bottom to improve stiffness. It's got all the sorts of mudguard and rack mounts that a multi-sport user could want too.

Decathlon says the bike is aimed at trail riding mountain bikers though, and to that end, there's a RockShox 30 Silver suspension fork with 120mm of travel. It uses a non-user adjustable coil spring rather than the easily tweaked air springs seen on flasher machines, but it's a respectable well damped and controlled unit from a big brand name, which isn't a given at this price. It'd be nice to see more secure through-axles at either end of the bike instead of flip-open quick-release versions, but once again that's an extreme rarity for the money. 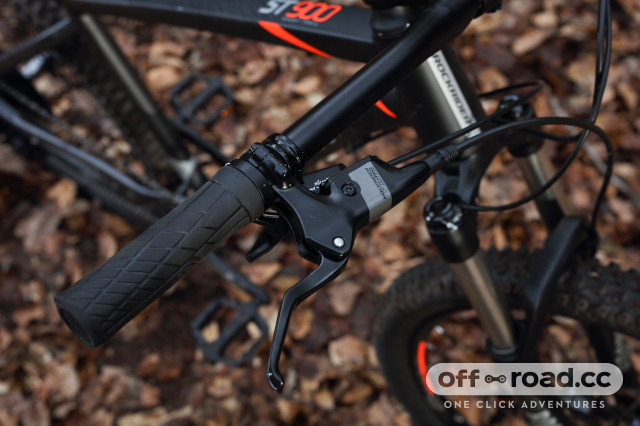 Decathlon has obviously used its huge buying power to good effect because the ST900 continues to outstrip similarly priced rivals in terms of bang for your buck when it comes to the stuff that makes it stop and go. While some bikes still make do with cable operated disc brakes - or even worse, rim brakes - the bike gets some hydraulically operated discs.

These don't need to be adjusted as frequently and tend to offer more power and braking control. The ones on this bike are branded Decathlon but made by large component manufacturer Tektro and they do the job pretty well. They take a bit of riding to get them bedded in and up to full power, but offer consistent all-weather stopping power. The lever shape is somewhat uncomfortable and feedback isn't great compared to the Shimano brakes you'll find on some bikes, but they do the trick well enough.

A single ring is more than enough 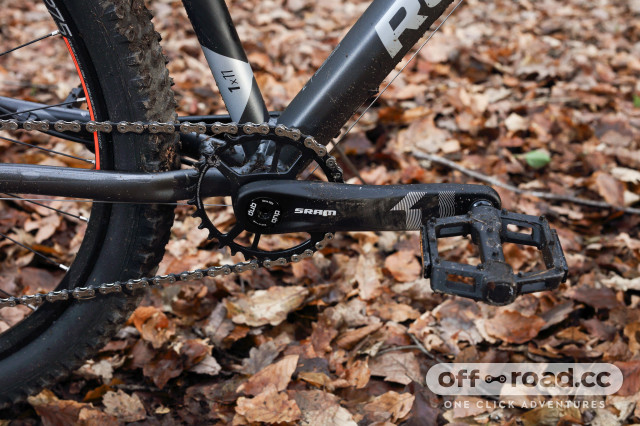 It's also great to see a single ring drivetrain that uses a wide-range rear cassette. This is common on much more expensive bikes, but it makes a lot of sense on a bike pitched at less experienced riders. Not having to juggle two separate shifters that control the gears at the front and at the back makes being in the right gear at the right time much simpler and the wide 11-46T spread of ratios is enough for everything from steep hills to flatter, faster terrain. 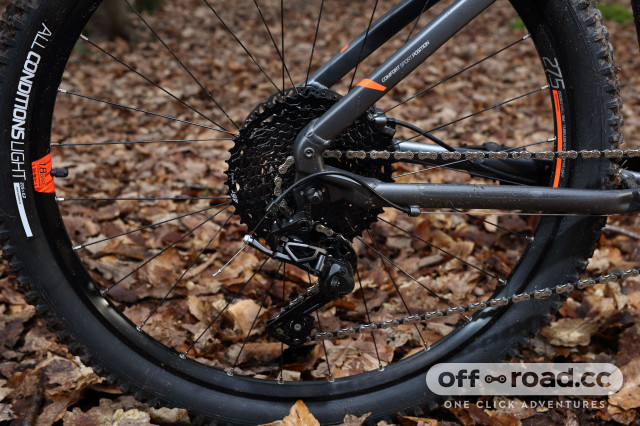 The drivetrain is a mix of SRAM's chainset and MicroShift's gearing, cassette and shifter. The SRAM stuff is great to see here; it uses a lightweight outboard bearing bottom bracket and it's proven to be plenty durable with plenty of spare parts available. 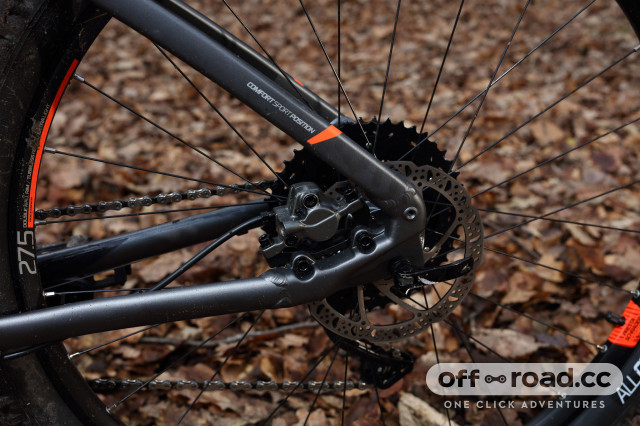 The MicroShift kit worked impressively smoothly on this bike, but though as this groupset is much less common it's hard to say how it stacks up to long term use relative to the known quantities of big-name rivals Shimano or SRAM. The trigger shifter does have a rather annoying feature in that you have to take you index finger off the brake lever in order shift to a harder gear - that means giving up control just when you need it. It's definitely something that's an issue as you try and to co-ordinate your braking and shifting and it's something those rival brands have well sorted.

Decathlon has provided a lot of its own brand kit and it's all solid. Wheels and tyres are in the mid-sized 650b format and I like this for a good balance of handling response and stability. They come with more puncture prone inner tubes as standard - nothing out of the ordinary there - but rather confusingly Decathlon claims them to be tubeless-ready, save for the addition of a rim strip, valves and sealant. For the uninitiated, those three things are what you need for an entire tubeless conversion, so saying 'ready' is a bit of a stretch.

The tyres aren't tubeless-ready as far as I could see either, but while not hugely voluminous at a width of 2.2", they do offer pretty decent grip. That's because they use a surprisingly soft rubber compound, in contrast to most of the tyres you'll find on bikes at this money. That'll wear a bit quicker, but offers infinitely superior grip in wetter, slipperier conditions - up the point that the relatively low profile tread simply can't dig in anymore.

There are some odd touches. The fork has a remote lockout on the bar which I barely ever used. I'd have though the bit of the budget spent on that would have been better directed at upgrading to an air spring. The seatpost is also the narrower 27.2mm diameter. That increases comfort by allowing a bit more flex, but it curtails your upgrade options should you want an on-the-fly height-adjustable dropper seatpost, which is a must-have for serious bikers. It's also got a fixed quick-release clamp that faces backwards into mud spray from the rear tyre, a poor choice for mucky UK conditions. 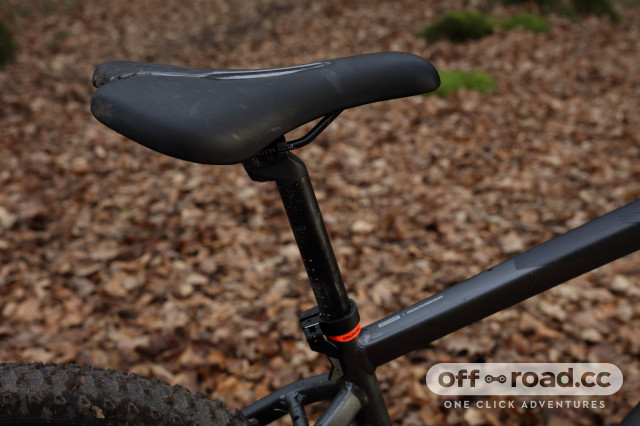 Apart from that, saddle is quite chunky but comfortable enough and the riser handlebars offer an okay (though not hugely wide) 720mm width for control on rough ground. More of an issue is the rather long stem - 80mm on mediums and this large-sized bike, though 70mm on small bikes and 90mm on extra-large frames. 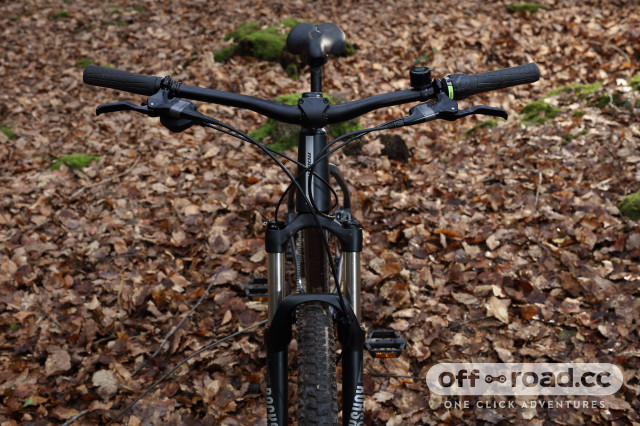 Either way, it's pretty long compared to what you'd expect on a modern mountain bike and it positions you too far forwards, meaning that you're more likely get pitched over the front of the bike when things are steeper, you're under hard braking or you hit an unexpected obstacle. 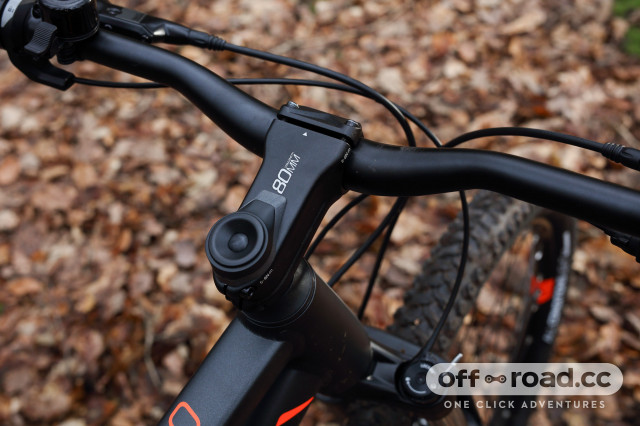 The frame reach - basically the horizontal distance between your hands and your feet - is also very short, which reduces how stable the bike is. That's fine if you're riding on flat, smooth trails but on the rougher, steeper and all-round less predictable surfaces of the average mountain bike track, it's far from ideal and makes the bike a much more nervous ride.

Of course, this isn't a bike aimed at the hardcore elite of mountain biking, but I strongly believe that novice riders stand to benefit the most from the sort of longer, less twitchy bikes that are found at higher price points and also increasingly at this one. 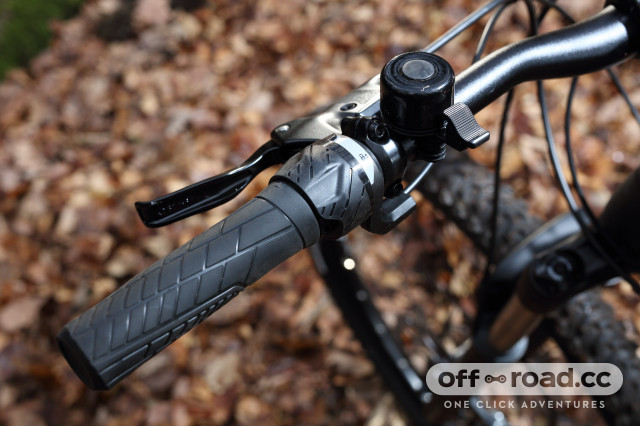 There's no getting away from the fact that the Rockrider ST900 offers really excellent value for money. You'll need to spend almost twice this to get a similar 11-speed drivetrain and the RockShox fork is a big name unit that delivers solidly functional suspension performance at a price where that's far from given and it's great to see hydraulic brakes, even if these don't wow with refinement.

The only drawback is one that can't be upgraded, however, and that's the frame geometry. It delivers handling that's perfectly fine for towpaths, multi-sport use or fairly tame green runs, but those wanting to push their limits a little beyond gently rolling terrain will find it nervous and more likely to bite than encourage. If you are the latter sort of rider, it really is a bit of a deal-breaker, which is a shame as it's an otherwise excellent machine.

Same thought here, every mtb reviewer (especially US and UK reviewers) forgets there is such a thing as XC, there are still people who ride up a hill before going down one, ow and even like it, who would've known!
Hey Jon get out the bikepark once and a while and try some real mtb (what u think is old-school), here in Belgium we only have a few bikeparks and 90% of the people here own an XC-mtb because that's what u need here not an downhill bike (hell with handlebars above 700mm u can't even ride most trails because the trees are to close)!

I'd tend to agree with behemothprocycling above - it's maybe not a hardcore trail thrasher, but at £600, of course it isn't going to be. Looks like fairly traditional/conventional cross country geometry with some fairly sensible touches other than maybe the rear-facing seat clamp.

Looks like another decent bike let down by a poor review. Not everyone wants to be part of the long low and slack trend with a front wheel kicked out miles in front like a Harley chopper, and anyone who tells you a dropper post is essential is simply wide of the mark. I wonder if I should stick to towpaths with my 90mm stem?