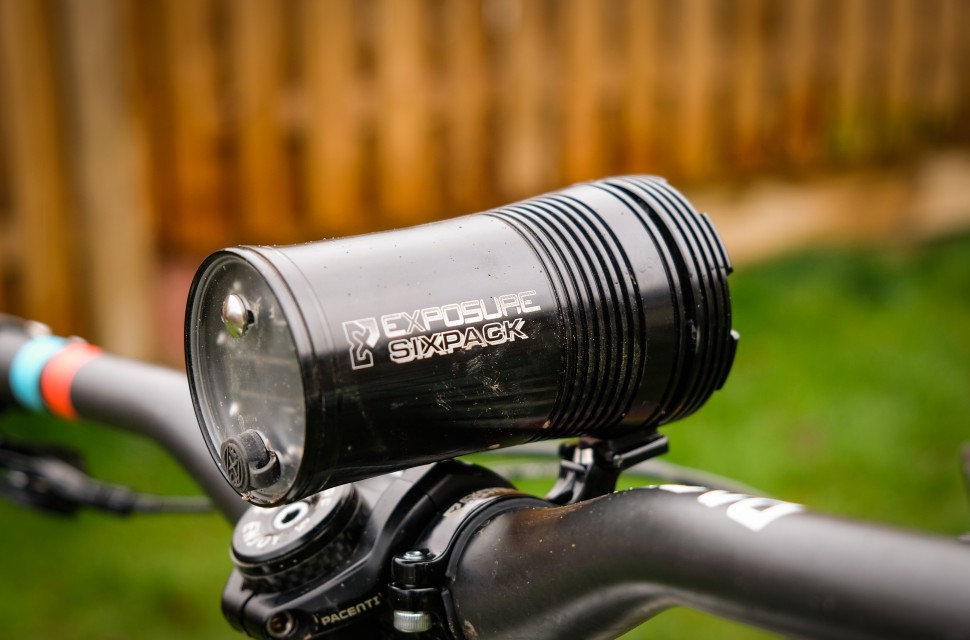 Flagship model in the USE Exposure Lights range, the Six Pack offers 4,750 lumens, some clever Reflex technology and ultimate battery life in a sleek package that has become the 'Bentley' of mountain bike lights.

The 4,750 lumen Six Pack is well equipped to conquer every night ride this winter and for seasons to come, it's bright, its easy to use and, thanks to the nifty Reflex+ feature, it has long-lasting battery life that means you don't have to worry if your ride overruns. 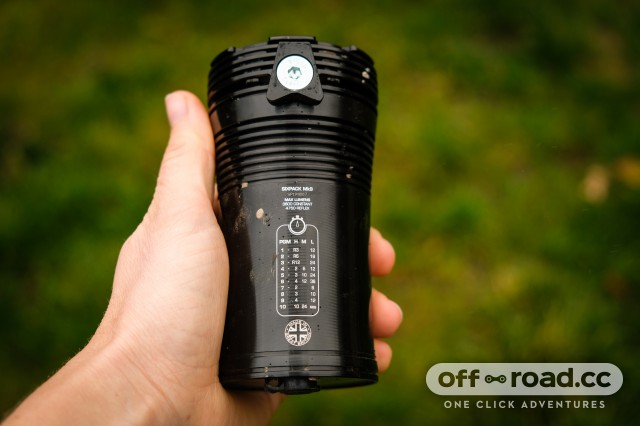 Let's talk Reflex+ to begin with as it's likely the reason you'll be splashing £435 out on this light. When in Reflex mode the light will dim and brighten depending on your movement. Where the old Reflex tech interpreted gradient, temperature and acceleration data to adjust the brightness to suit the conditions, the Reflex+ also detects any period of inactivity and automatically dims the light to save power. For example whilst stopped or climbing slowly on a fire road the light dimmed right down, then brightening immediately as I sped up to go downhill or started to move the bars differently on a technical climb. Check out the video of the Maxx-D below to see the difference in lumen output, albeit with this light has a maximum output of 3,300.

The Reflex+ is easy to set up, it calibrates itself for the first 15 minutes or so, calculates your riding style and adjusts lighting accordingly. The result of using this feature is a whopping 4750 lumens on the downs (rather than a max of 3,600 from a non-reflex mode) and battery saving when riding slowly and low light is adequate. It remembers your riding style and implements it immediately on your next ride, unless it senses the ride is drastically different, at which point it’ll recalibrate. This feature works so well, with the programme 1 (of the 9 available) pumping out 3 hrs of Reflex+, perfect for most night riders to benefit from daylight riding conditions when needed most. 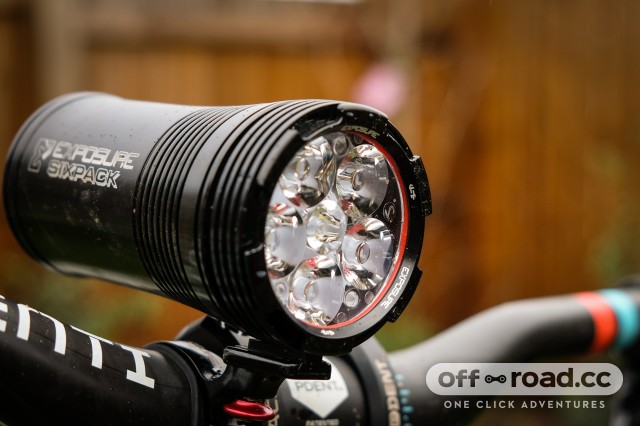 The beam emitted from the six LED's of the Six Pack is clean, crisp and very, very bright. A large portion of the trail ahead is illuminated with some good width covered too, helping to increase peripheral vision when cornering. Below is the light on full chat at 4,750 lumens. At its lowest power in a Reflex+ mode the light is dim but totally adequate for climbing at slow speeds. 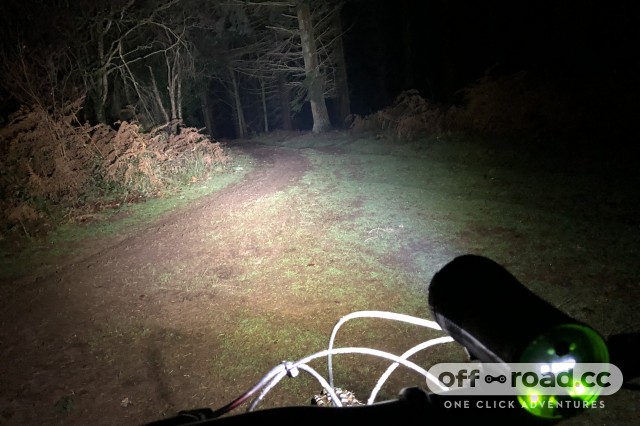 As I mentioned there are 10 available programs or modes which are easy to cycle through using the metal button on the rear. Also at the back is a small LED display which when the light is off, displays battery life. When the light is on this same display shows the mode selected followed by the 'run time' left with additional lights to quickly indicate if power is low. 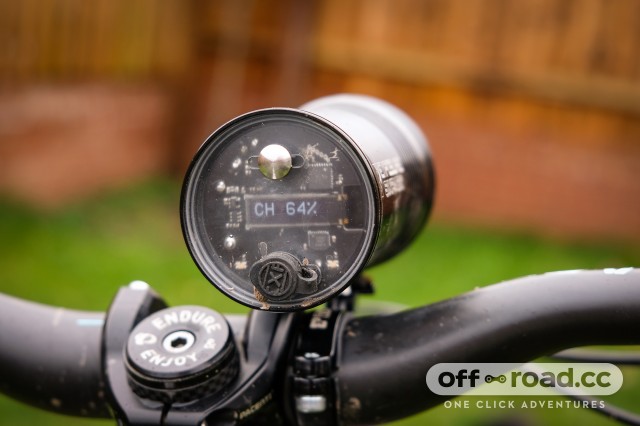 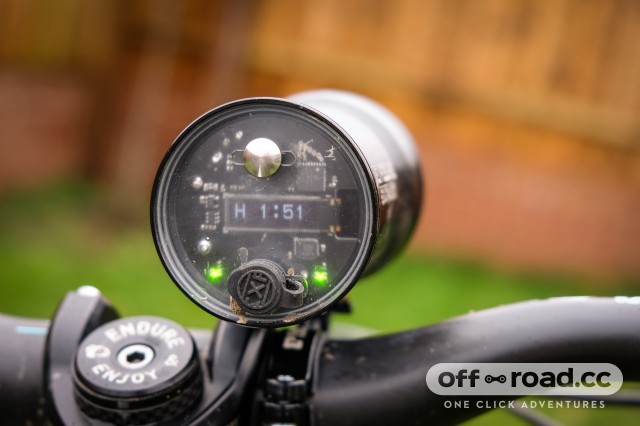 The rear also houses the charging port with its rubber cover, one of my only niggles with the light was that this cover was tricky to close, needing firmly pressing and wiggling around to ensure the flexible rubber stayed put over the port. 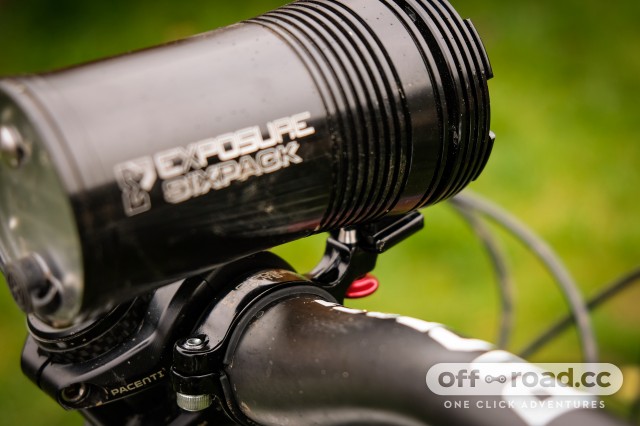 At 391g the light isn't the lightest but it's no heavyweight either considering that it houses the battery with no external cabling needed. The light is attached to the bars via a sturdy clamp which, although is super tough, is a fiddle to alter the light height part way through a ride, needing to be undone with an Allen key first and spun on the bars. The flip side to this is that once it is on and in the correct position, its small and neat meaning that you probably won't feel the need to remove it from your bars until spring arrives. 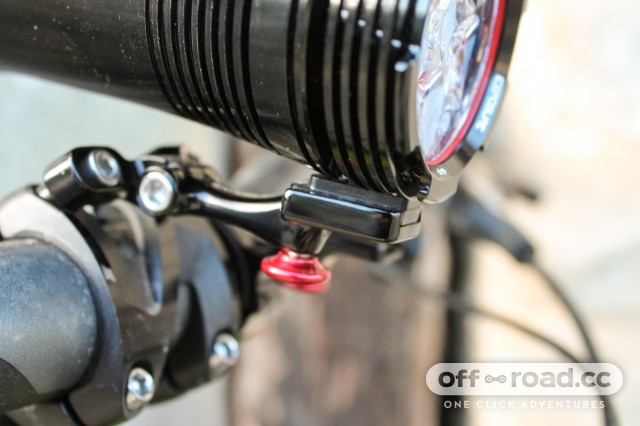 In the past, I have experimented with the stem mount which does a lovely job to centre the light on the bars rather than have to set it left or right of the stem. It'll be an extra £25 to purchase this, but I think it's well worth it.

Charge time is pretty lengthy at 12hrs from flat, but as the run-time can be displayed on the rear, if you have to use the light partly charged at least you'll know the time you have to play with. The MK9 is £10 more expensive than the MK8 but Exposure say that the charge time has been decreased by 40%, unfortunately, we didn't have the two lights to test back to back. The light now also comes with a USB style charger which is much better than the chunky three pin chargers of old.

The Exposure Six Pack is a beautiful thing that is not just pretty, its got substance too with high lumen outputs, long battery life and quality construction. It's a hefty outlay at £435 but from our experience, this is a light that will serve you well and last a lifetime. 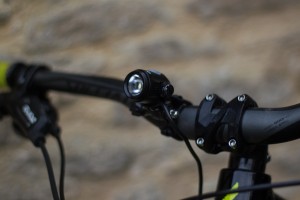 whats happening to off.road.cc?! what % of your target audience is going to be for a £435 light? or is it just me? personally im finding this site less and less relevant.

Hey, we are working our way through a stack of lights right now! Is there anything you'd like to see tested? If we have it I'll push it to the top of the list or get one in to test if I don't have it. Rach

Rachael Gurney 4 years 1 month ago
Not a lightsaber, but if it was I'd definitely buy one! What it is, is a great quality light that doesn't involve the use of external batteries, is super bright and with a cool feature that extends battery life to 3hrs on max power. No, it's not cheap but I regularly hear of riders that own one of these things for years and years. I've owned a Diablo in my previous (non-journo) life and still have it now, working very well, part of what you pay for. There are some other 4000 lumen lights out there and they are also reaching up to the £400 mark (Lumicycle Apogee being one of them), others like the Gemini Titan are less (£300) but you have an external battery with that one which in my experience equates to more faff and untidy cables. Is there anything you want us to test at a lower price? We are working our way through a stack right now! Rach

come on guys, 400+ quid front light, are you f*ckin mad? what is it, a f*ckin light saber?? what do companies think cyclists are?? f*ckin idiots??

whats happening to off.road.cc?! what % of your target audience is going to be for a £435 light? or is it just me? personally im finding this site less and less relevant.