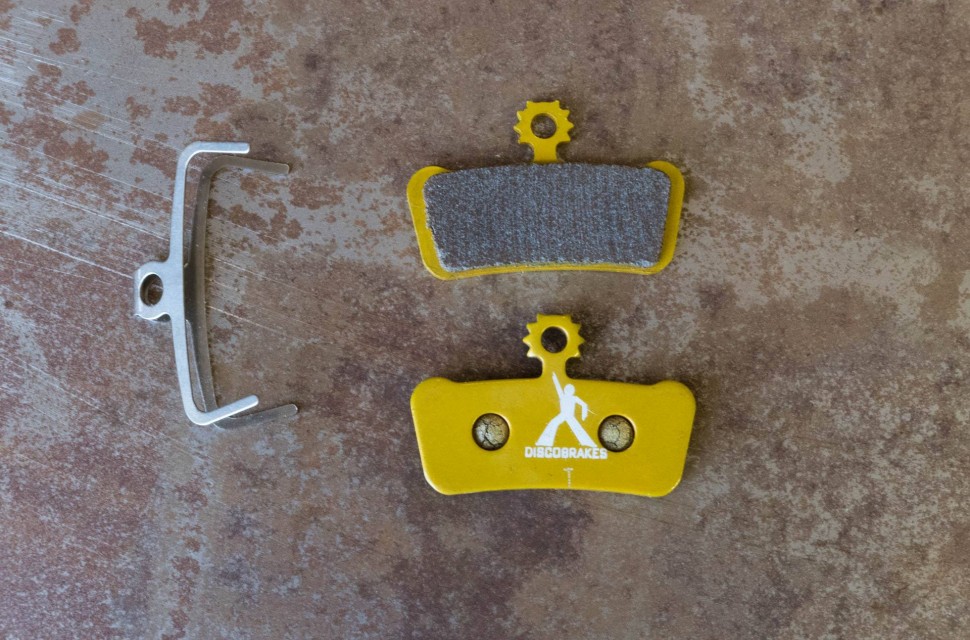 Jon Woodhouse
|
May 22 2017
|
Overall
Quality
Performance
Value
What's good?
What's not?
Buy if...
You want the performance of OEM brake pads without the price tag

Aftermarket brake pads tend to cost a fraction of what standard spec pads cost, but when it comes to performance they can be hit or miss. Happily, the offerings from Disco Brakes are reassuringly free of the wrong kind of funkiness, offering up solid stopping power without the big price tag.

I've been testing both their sintered and semi metallic versions on a SRAM Level setup (SRAM Guide pad is pictured) for a number of months and they're been delivering consistent, noise free stopping throughout that time. If your tastes tend towards gravel, then it's worth nothing that these are exactly the same spec as you need for SRAM's hydraulic road offerings, so my conclusions stand for either.

The yellow sintered pads have a higher metallic content, while the black semi-metallic uses a mix of organic and metallic material. As a rule, sintered pads tend to be much more hardwearing at the expense of noise and initial bite. While fully organic pads have plenty of bite and tend to be much quieter, they wear more quickly and can glaze over when exposed to extreme heat, such as on prolonged descents. A semi-metallic pad splits the difference and is therefore an excellent compromise, especially for off-road riding where muck tends to accelerate wear rapidly.

The big selling point of the Disco Brakes pads is obviously in the price tag. At £6.79 a pair for the sintered versions and £6.75 for the semi-metallic items, they're substantially cheaper that genuine SRAM items, which cost £20 for a pair of sintered replacements. For that sort of cash, you can get a multi-pack of four pairs of Disco Brakes items and still have change to spare.

Many budget suppliers cut costs by not providing with a replacement pad separation spring. As the spring can get be damaged if you let your pads wear down to the backing plate (ahem) so having one included is a definite bonus. It's a big win that the Disco Brakes pads include a shiny new spring in the package. It's a nice detail that the sintered pads also have a copper backing plate to better transfer the extra heat they generate away from the braking surface.

Performance wise, the pads have been faultless. There's a smidgen more initial bite to the semi-metallic pads, but it's not a ridiculous difference between them and the full sintered items. The latter have proved to be almost silent too, only giving a little bit of a honk when you apply them with a sodden rotor. I'd quite happily run them year round. Despite some fairly big runs and full on enduro-race-pace descents I've not run into issues with glazing on the semi-metallic items either, though I've not had change to run them in the Alps or similar. They're doing well wear wise, despite plenty of muddy, gritty riding in the wet too.

All in all, it's hard not to give these a glowing recommendation. The pricing is spot on and the performance is on point too. There's a huge array of pads available too, so regardless of your braking setup you should be able to find something to fit.

Superior power in all conditions Long wear pads, great for DH or XC Consistent braking power in the wet Almost unaffected by rain and snow Copper back plate

Seem well put together and the sintered pads have a copper backing plate, plus you get the spring included

They've lasted well so far, despite a good few months of muck, moisture and grit

They're almost a quarter of the price of OEM pads, so that's heard to argue with

Good power and bite, while the sintered pads aren't too noisy either

They're cheap, work well and come with a replacement spring