Skip to main content
Log In Register
Whyte S-150C Works review £5,499.00
The S-150C Works is fast, capable and a ton of fun, seeming to hold its line better than any bike I’ve ridden. 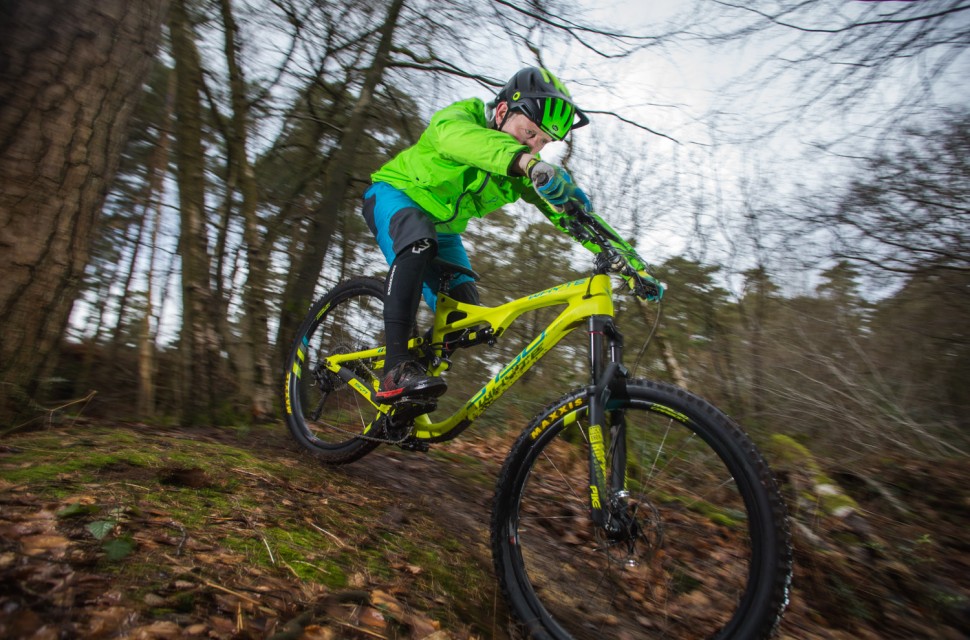 The S-150C Works is the flagship model in Whyte’s three-bike 150mm 29er line up but I need to point something out before we get stuck into this test and it’s that this bike can also be run with 27.5in wheels. To make the switch easier, Whyte sells the smaller diameter wheels in kit form with either alloy (£599) or carbon (£1299) rims, Maxxis High Roller II 2.8inch tyres and spare Hope disc rotors already fitted. The only thing you need to do is swap over the cassette and there are the tools included in the box when you buy the wheels for doing that too.

UK company Whyte is at the cutting edge when it comes geometry and the large size S-150C Works frame has a long 475mm reach and a slack 65.6 degree head angle. It’s also pretty low to the ground for a bike with 150mm of travel so feels incredibly planted when railing corners or plunging down steep stuff. With all that room in the cockpit, you really feel like you’re sitting in the bike rather than being perched on top and weight shifts are also much less dramatic, so you can really fine tune the front or rear wheel bias when skirting along slippery off-camber or scaling loose wet climbs.

To compliment the modern geometry, the S-150C Works features a Rock Shox Pike fork with a custom 42mm off-set. This results in trail measurement of around 125mm or 25% greater than normal. The upshot is the steering is much more stable, especially deep in the travel. Increasing the trail also means there’s a greater correcting force on the front wheel, so when it’s getting knocked around in rooty sections you don’t have to fight as hard to get it back in line. It also seems to help when railing corners because the S-150C Works seems to hold its line better than any bike I’ve ridden. 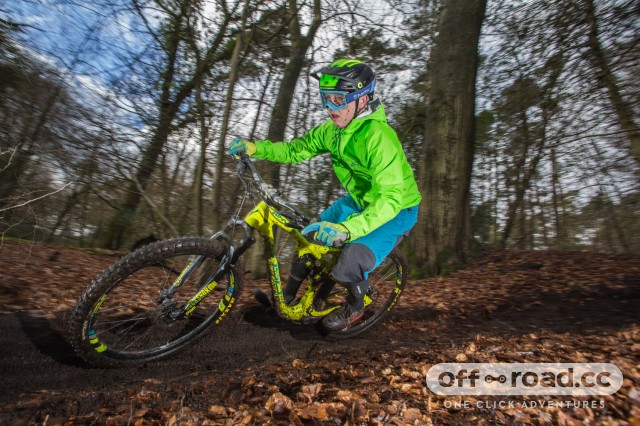 As you’d expect, build quality on the S-150C Works is top notch and it gets a sleek multi monocoque carbon front triangle (with space for a bottle cage), a welded aluminium link and a super stiff symmetrical SCR rear triangle. Combined with the Boost rear spacing, the ‘single chain ring design’ allows Whyte to offer incredibly short 435mm chainstays but also creates enough clearance for the fatter 2.8in tyres.

Whyte runs an in-house 50mm stem on the large frame and an 800mm wide carbon bar. On the sample this was the Race Face Next R but the specification actually says SixC and I’d prefer that handlebar because it has a slightly deeper rise. I also like a saddle with a bit more padding – the in-house Whyte perch is rock hard.

Most of my testing of this bike has been down with the 29in wheels but I have been out several times on the 27.5in wheels. Normally when fitting Plus tyres to a 29er you have to tweak the geometry (the smaller diameter wheel and extra compression of the larger volume tyres means the BB is usually too low) and most manufacturers have some form of adjustment in the suspension linkage to do this. Whyte doesn’t but it did say that if you compare wheel sizes and take into account the dynamic sag and other variables it’s essentially only about a 5-8mm difference in ride-height when running the 27.5in wheels. However, the bottom bracket height is lower with the 27.5in wheels and 2.8in Plus tyres fitted and as a result I have caught a pedal quite a few times. I would say this is something you can get used to but you do have to be careful when trying to sneaking an extra crank in corners.

The 2.8in High Roller II tyres offer a ton more cushioning, especially on rocky trails, but having ridden both wheel sizes back-to-back my preference is for the 29in wheels and 2.3in tyres simply because the bike was designed around that size, it feels precise and lively but still has really good pace in choppy conditions. There’s also a lot more tyre choice in 29in, especially for winter mud tyres. 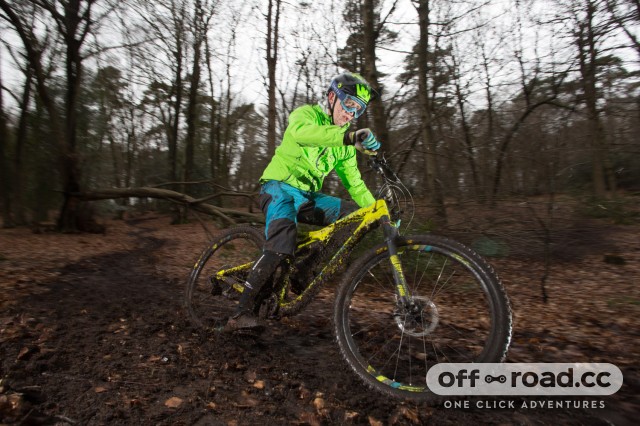 Whyte really has nailed the handling and geometry on the S-150C Works. It feel quite sedate initially but once you start charging it really starts to come alive. The frame is incredibly stiff but the rear suspension is so supple that it stays hooked up even in the most testing conditions. I’d recommend running the Pike a little bit softer (and raising the bar to accommodate the increase in sag) so it matches the rear end but other than that this bike is raring to go. The Switch facility is a bonus but with the stock 29in wheels, the S-150C Works is fast, capable and a ton of fun.

The Whyte S-150C Works is built around a unique 150mm 29er Boost fork produced by RockShox with a special offset. This fork is the final piece of a complex geometry design and component spec puzzle, which produces improved performance and steering feel for bigger wheels and importantly enables Whyte to create a platform that works for 29in wheels and 27.5in wheels. Supplied standard with 29er wheels the S-150C Works is punchy, fast and precise with a real sense of speed and outstanding trail feedback or Switch to the 27.5 x 2.8in and enjoy a whole new level of cornering grip and small bump response.