Skip to main content
Log In Register
Trek Remedy 7 review £2,200.00
Not the longest or slackest but this long travel trail bike provides the fun factor by the bagful 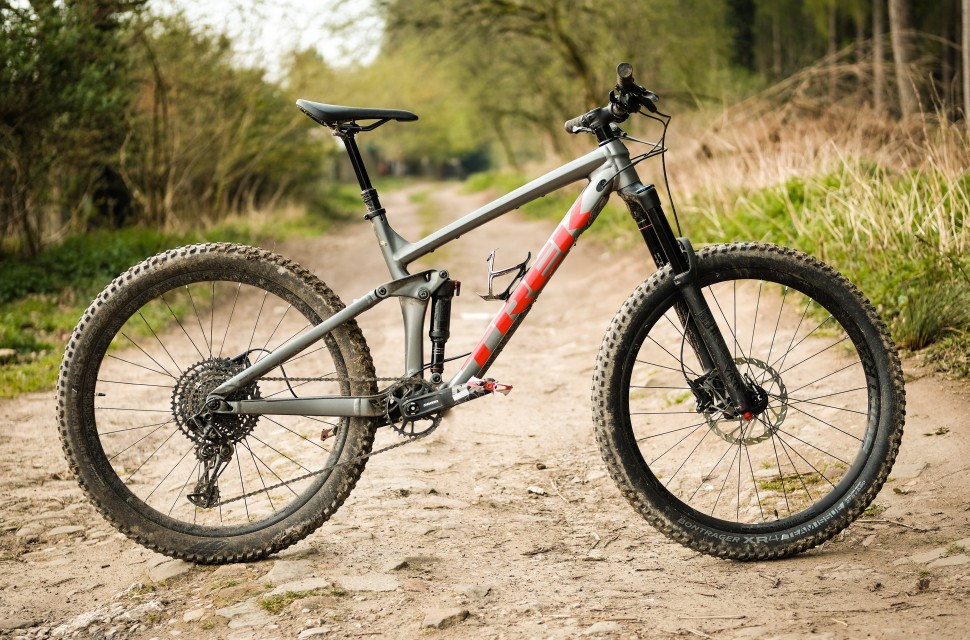 The Trek Remedy 7 is a long travel trail bike that sets a great standard for this category of bike. It’s reasonably well priced for a ‘shop bought’ bike, providing a nimble ride that will put a smile on your face. It's probably not the fastest bike you'll ride but it is a lot of fun!

The Remedy we chose to test was the bottom of the range Remedy 7, coming in at £2,200, it’s not the cheapest long legged trail bike you’ll find but it is competitive on price, direct buy brands eliminated from the equation.  For your money you get an alloy frame with internal cable routing, adjustable geometry via the brands Mino Link, Trek’s still excellent rear suspension, despite no longer sporting the ‘full floater’ design and a smattering of good spec choices alongside some more questionable ones. 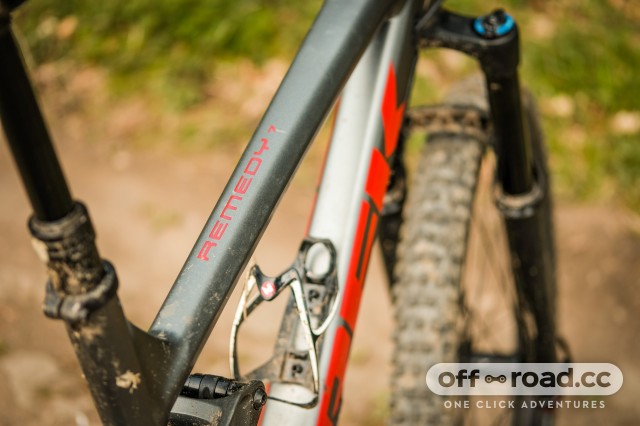 The frame also features Trek’s Knock Block system, which stops the bars turning to far that allows the fork crown to hit the frame. It's something Trek need to prevent after altering the design of the bike to incorporate a straighter down tube in conjunction with an altered rear suspension design (no more ‘Full Floater’) which provides a quoted 5% stiffer frame and the ability to run metric shocks. Trek says that the advancement in shock technology means they no longer need the Full Floater design on longer travel bikes as the shocks are now more sensitive. 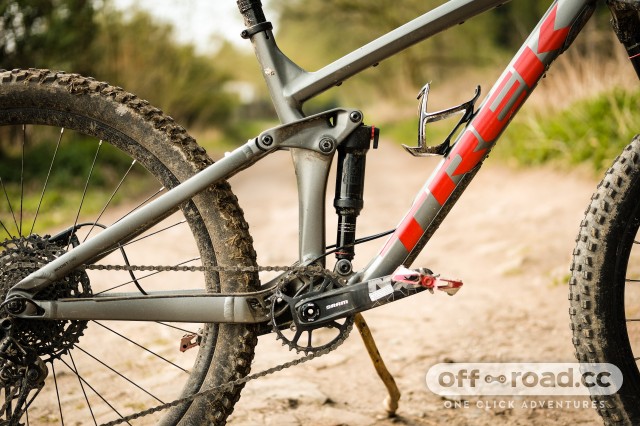 The Knock Block is unnoticeable when riding but try to manhandle the bike into a car or through a tight space and you’ll soon know about it. It might sound petty but considering I doubt many people will notice a 5% increase in stiffness myself included, I’d rather do away with the Knock Block altogether. 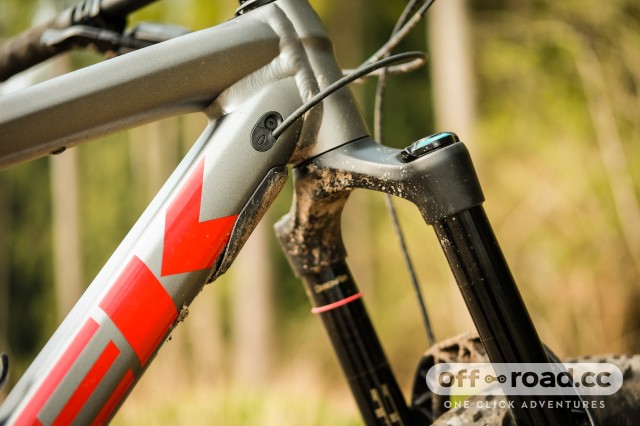 If you want to run the stem of your choice or one shorter than the 50mm Bontrager option then you need to fit a Trek KnockBlock Headset Lockring Spacer which locks the steerer tube to the headset bearing cover and frame chip. You can then fit regular spacers and your own stem on top of this. 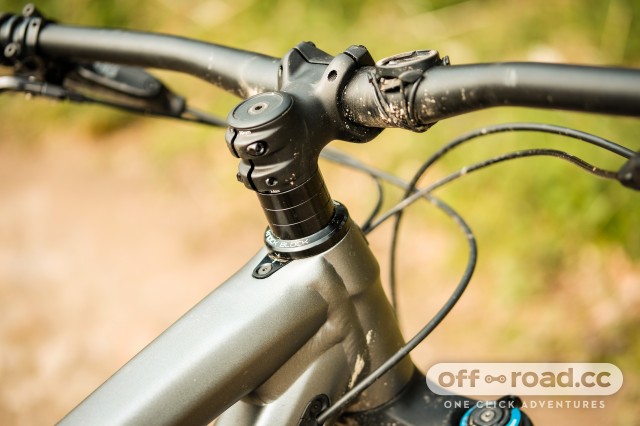 Whilst I’m talking about the frame we should also talk about the Mino Link, a reversible chip at the connecting junction of the seat stays and rocker link allowing the head angle to be steepened by half a degree and the bottom bracket to be raised by 10mm in the steep position.

I set the bike in low and left it with a 66-degree head angle and a 74.7-degree seat angle, I should think that most riders will largely do one or the other and I’m yet to meet anyone who flips a chip on a regular basis. That said, if you are putting in the miles then the option is there to steepen the effective seat angle and raise the BB further to make life easier and more efficient. 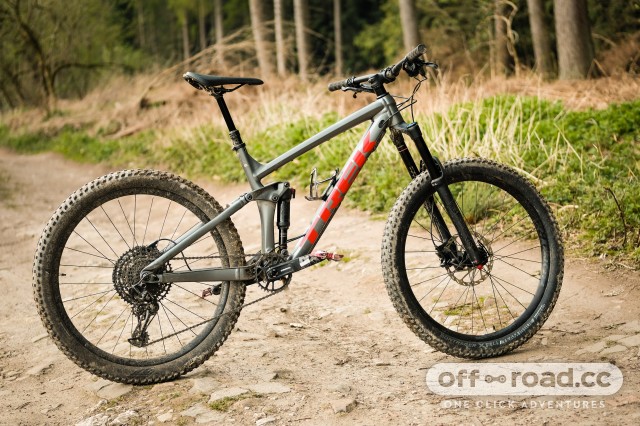 The bike features 150mm of travel at the rear, dealt with by a Rockshox Deluxe RL shock. Up front, the fork fitted is a Rockshox Yari RC with 160mm of travel. A good choice of fork I think, compare this to an entry level Specialized Stumpjumper  (£2,700) or a mid-range Giant Trance (£2,499) and you’ll get a Fox 34 Rhythm which will ultimately be less stiff than the Yari and not as easy to upgrade. Remember for about £200 and you can change the internals of this fork for essentially provide you with the impressive performance of a Lyrik RC2. It's this fork, plus the 12-speed drivetrain in conjunction with Treks impressive suspension performance that makes this bike good value for £2,200. 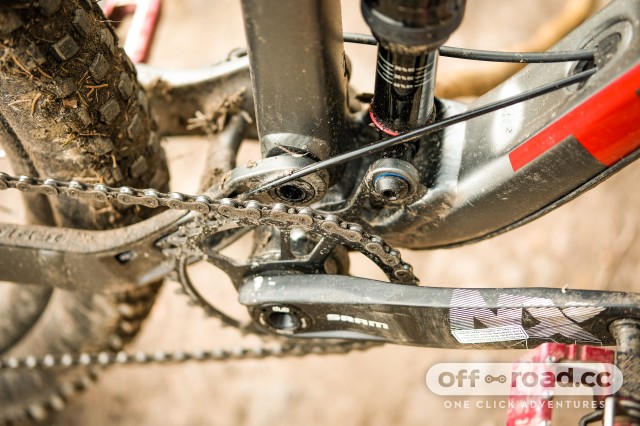 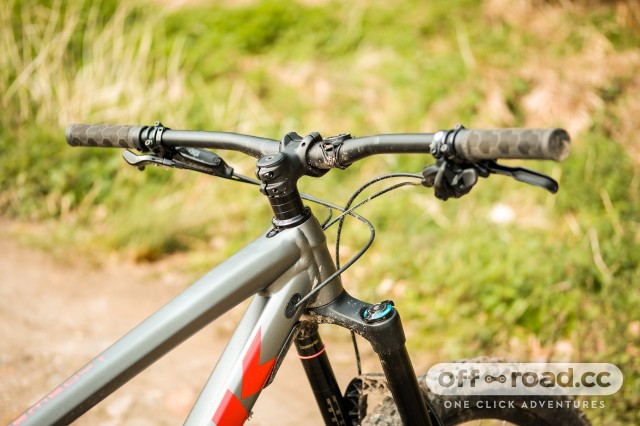 Elsewhere there is a SRAM NX Eagle drivetrain connected to the bike by a press fit bottom bracket and disappointingly underpowered SRAM Level T brakes. I’ve already alluded to the fact that this is a trail bike rather than an enduro ripper but these brakes are will woefully inadequate for the type of riding the bike encourages. The build kit is a mostly Bontrager affair; bars, stem, saddle, grips, dropper, wheels and tyres. 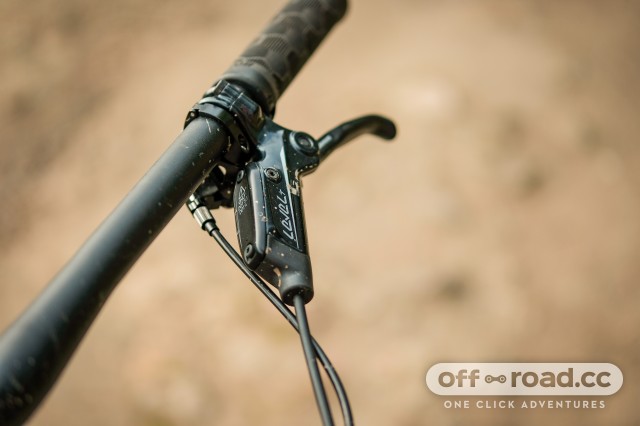 The wheels are nice and wide Bontrager Line Comp 30 (30mm internal diameter) meaning the 2.6” Bontrager XR4 tyres sit nicely on them. In fact, the tyres come up pretty large, the trail tyres aren’t the most aggressive in terms of tread or carcass but they grip very well in dry to intermediate conditions and they roll well too. If you are the type of rider to regularly roll tyres then you might find the sidewalls a little flimsy and lacking support though. 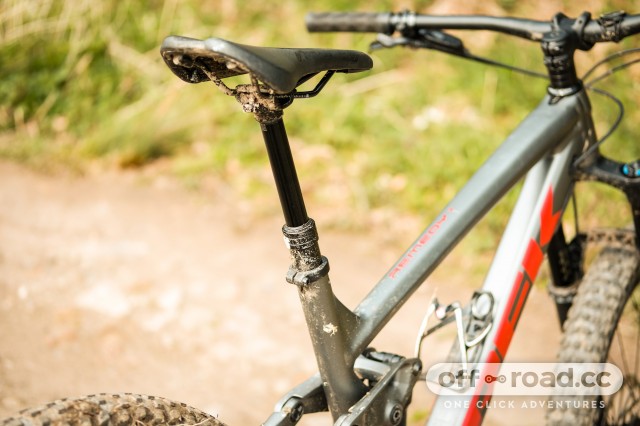 The bike I tested was the 18.5” model which actually means the bike has a seat tube length of 17.5”, plenty of room you’d have thought for a 150mm dropper post for a rider of my height you'd have thought. The Remedy 7 comes equipped with a Bontrager post but the kink lower in the seat tube means that the post won’t insert fully into the seat tube leaving me with about 30mm left out of the tube. A longer drop would fit here if the post had an overall shorter length, as it is shorter riders than I won’t be able to size up without swapping out the post after purchase. 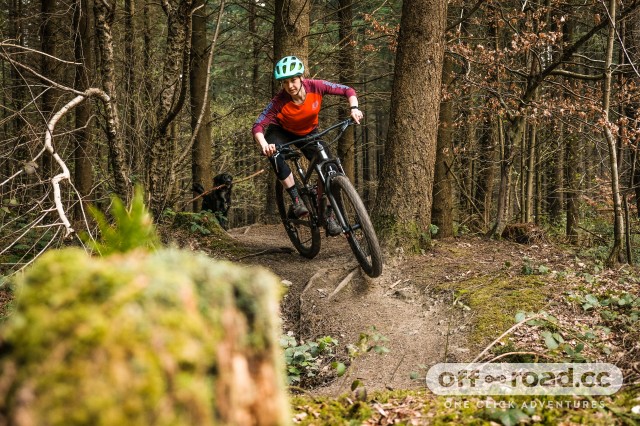 To ride the Remedy is a lively and nimble ride. It's incredibly fun and is a hoot to hope and jump over trail obstacles, in fact, I think the Remedy would be disappointed if you didn’t take some air! Trek’s Active Braking Pivot is a great addition, it’s immediately noticeable under braking, the bike is more composed when slowing providing more grip. ABP is a suspension design where Trek position the pivot on the rear triangle around the rear axle allowing the suspension to work better when braking as the rear wheel can track the ground better, increasing grip under braking in comparison to other suspension designs. 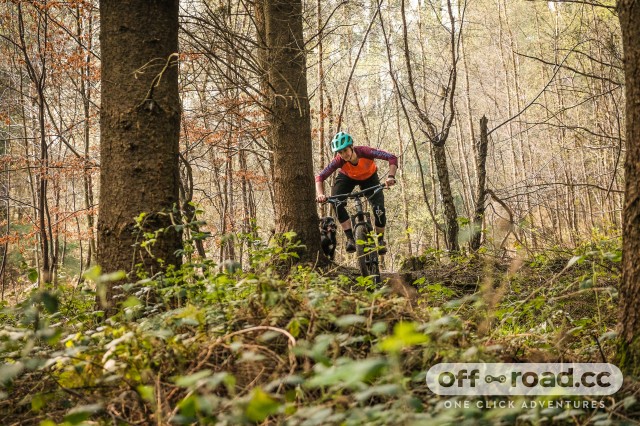 Although sensitive when descending I found the Deluxe shock a little overdamped but this is nothing new and not Trek Remedy specific, I’ve mentioned it on numerous test bikes this year and last. I’d like to be able to speed the shock up a touch and really make the most of the bikes affinity for popping and hopping around the trail. 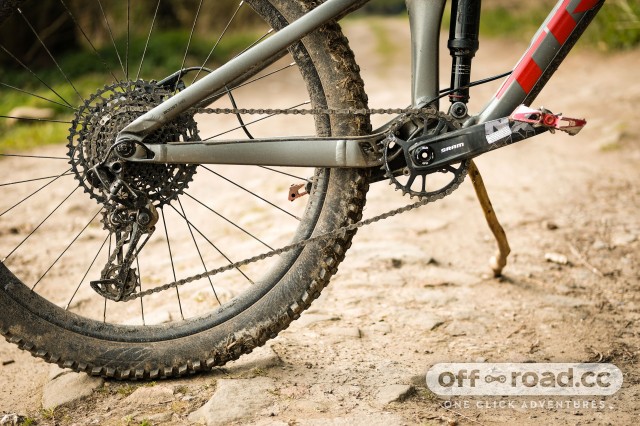 Geometry wise the Remedy can’t be considered long, its reach of 435mm (in low position) puts it in the category of the shorter trail bikes, it’s not the most capable when going fast and the singletrack gets rough but it is competent in most trail situations and will see you through gnarly terrain in a composed way.  The head angle of 65.5 degrees is plenty slack enough for the purpose and the chainstays 435mm suit this ‘medium’ sized bike well. I’d be keen to see how a lower bottom bracket (349mm) and longer wheelbase changes the stability of the bike for the better but then it probably wouldn’t ride like a Remedy, I liked sliding the bike around and jumping over most things in my path whether they required it or not, so perhaps it’s best left the way it is.

The head tube is pretty short though at 105mm and you’ll find the best way to set up this bike is with plenty of spacers under the stem in order to weight the front of the bike more efficiently and prevent the front end from feeling too low when on steeper tracks. It's easier to weight the front effectively without feeling pitched over the front with higher bars, your weight can stay balanced front to rear. 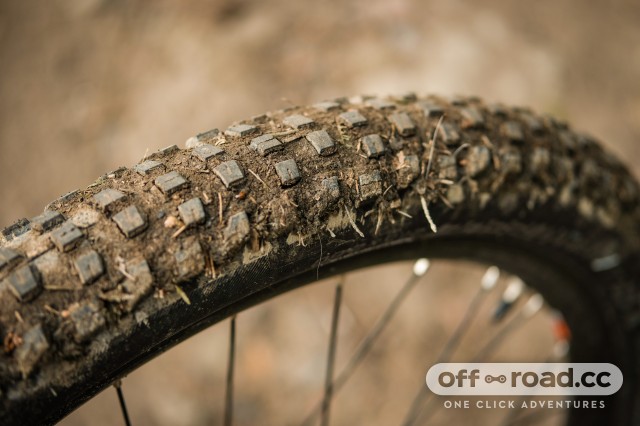 True to form of a trail bike the Remedy climbs well too, mostly due to a good suspension platform and a relatively light build (32.1lbs) even considering the hefty SRAM NX drivetrain. The bike moves easily over bumps and undulations in the trail whilst not bobbing too much when pedalling either. 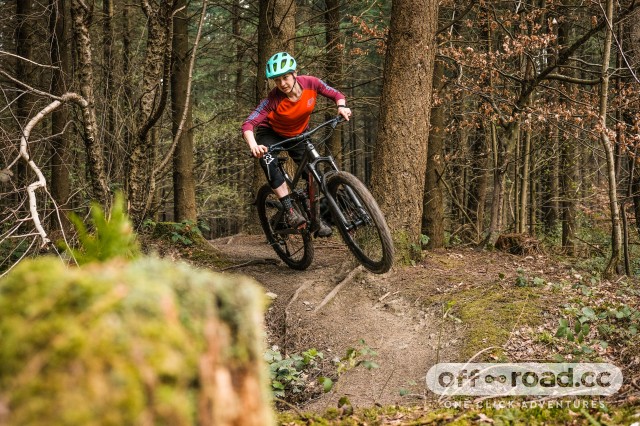 In summary, the Remedy 7 is a classic long travel trail bike, this niche of bikes is proving ever popular and this is a great example. The bike may not be the slackest or the longest and the geometry is conservative given more modern standards out there, but it is a super fun bike which will evoke a smile on every trail. Ride one and if it suits the trails ride, you like it and it makes you laugh, it’ll be a good buy.