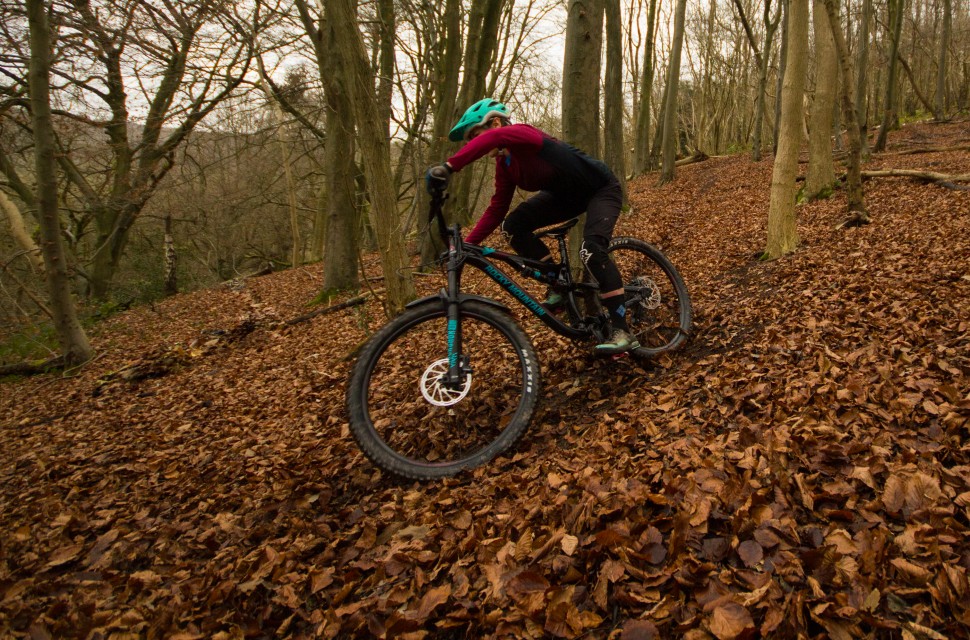 Rachael Wight
|
Dec 21 2017
|
Overall
Quality
Performance
Value
What's good?
What's not?
Buy if...
if you want a slacker trail bike, that’s slim in the weight department for the price and has a penchant for hops and corners,

Rocky Mountain slot the radically overhauled 2018 Altitude into the category of an ‘aggressive trail’ bike. Sporting longer travel, a new frame and redesigned linkage the Altitude is longer, slacker and feeling the benefits.

The frame of the Altitude has been updated across the range for 2018 and that includes the Alloy 30 model that we have in for test. The redesigned frame uses Rocky Mountain’s Form alloy with each tube optimised for strength, weight and ride quality. This, no doubt, goes some way to contribute to the low weight of the full build, even in this low spec the bike manages to come in at 31.1lbs (14.1kg), a good weight for a 150mm bike at this price.

The frame now features sealed bearings all round rather than use grease ports. Cable routing is all internal with cables entering the frame near the head tube then popping out near the bottom bracket for the rear gears and brake, it’s a nicely secured and rattle free affair. The Altitude now boasts boost spacing, and clearance to run wider diameter tyres. This model was fitted with Maxxis Wide Trail tyres front and rear and sadly a press fit bottom bracket. The paint isn't too much to write home about either, in just a month of testing, our bike was looking decidedly tatty. 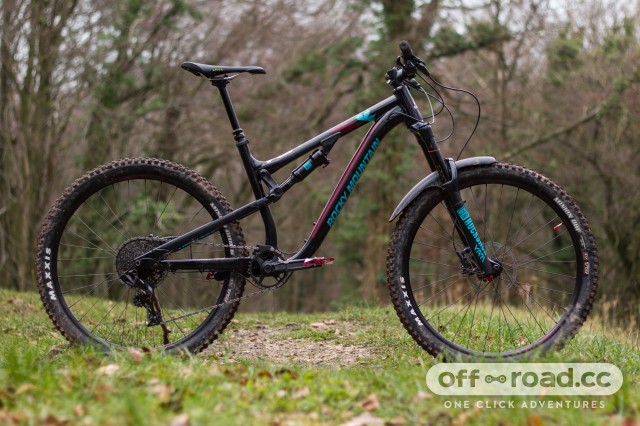 The four-bar linkage has been altered too, the shock still mounts to the top tube but the rocker link is now one piece rather than two and sits more rearward near the seat tube junction. The Ride9 geometry adjustment system, offering nine different geometry adjustments is now located where the lower shock mount meets the linkage. Ride9 system comprises of two squares that dependant on where they sit relative to each other offers nine different geo settings. Mind boggling, to say the least, two adjustments of high and low is sufficient in our opinion, nine we found a little unnecessary. The rear pivots on the seat stay are also worth noting, being single-sided, they look pretty sleek. It'll be worth adding a chainstay protector though as we removed took a fair bit of paint from ours on the drive side. 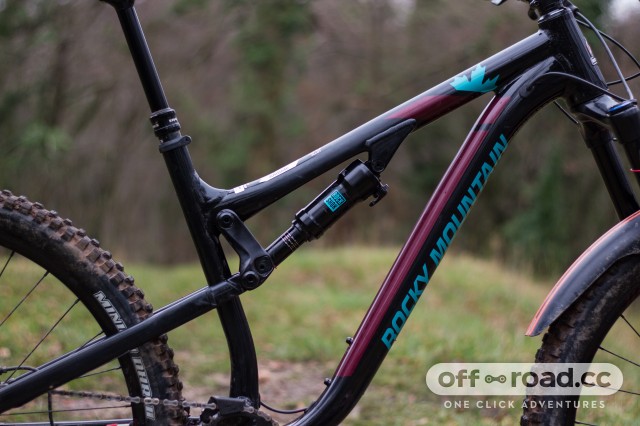 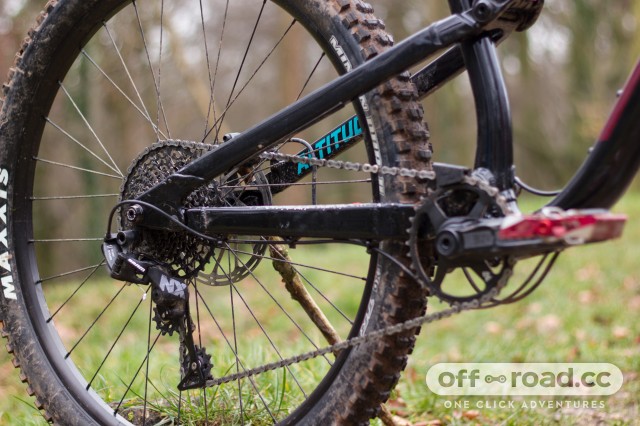 For your £2,800 you get 160mm Rockshox Yari forks up front, a Rockshox Duluxe RT shock  to deal with the 150mm of travel, and then SRAM kit all round in the form of Level brakes, an NX Drivetrain with 11-42T cassette and a 32T steel chainring. The wheels come courtesy of Sun of which the Duroc rims are a healthy 30mm wide internal and as said above, they are befitted with those nice n’ wide Maxxis tyres. Pleasingly there’s a 150mm Race Face Aeffect dropper post which when combined with a low 432mm seat tube length means the seat can be right out of way on the downhills. 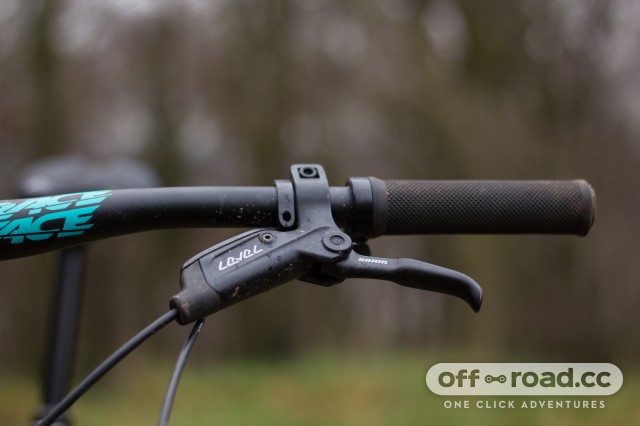 It’s a spec that you’d expect at this price point but we’d like to see at least SRAM Level TL brakes with a split clamp rather than this unsightly number which requires you to remove it along with the grips from the bars in order to adjust the reach, it’s an annoying set up fiddle. We’d also be keen to see a 3C compound used for at least the front tyre, the grip on offer from the harder compound of the Minion DHF WT EXO leaves a little to be desired in slop or on greasy surfaces. 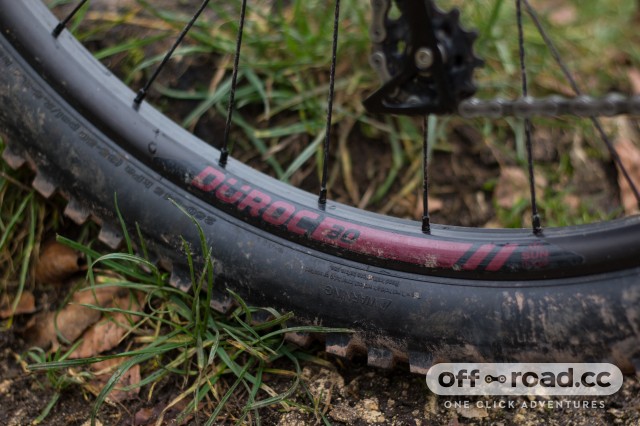 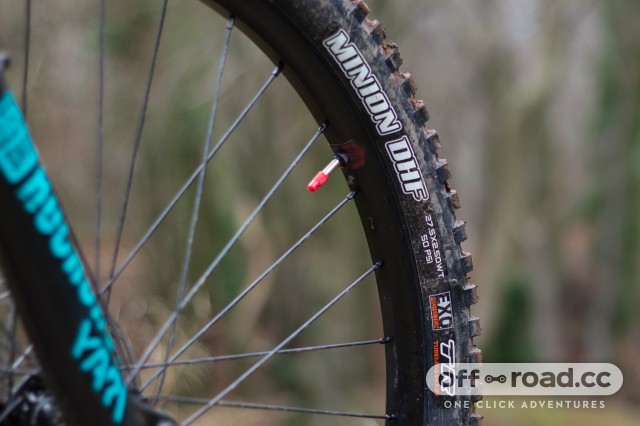 Climbing up the first hill, the Altitude’s slack 74 degree seat tube angle (in the slackest setting) is evident, despite its light weight it’s a slog uphill, setting up the bike in its steepest position, leaves the seat angle at 75.1 degrees, which is better when climbing but combines with a 66.1 degree head angle, meaning a less aggressive head angle to tackle the descents with. The slack seat angle, short chainstays and short’ish wheel base combine to produce a bike with a front wheel that wants to lift on steep climbs and one that leaves you feeling as if you are on a recumbent, folded at the hips and pushing the pedals forwards rather than down. Grip is good though, the sensitive suspension keeping wheels tracking the ground and traction high on the ups with little pedal bob. 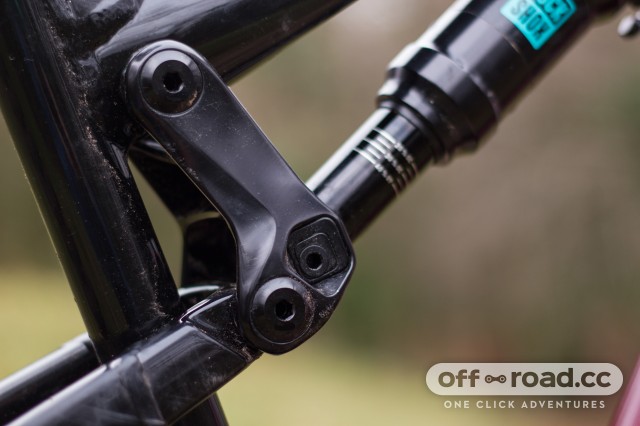 Claiming to be an ‘aggressive trail bike’ it sounds like a wannabe enduro bike, and that is precisely how the Altitude feels to ride. The 65 degree head angle and the 160mm Yari’s will see you though most of the gnarly terrain you can throw the Rocky’s way as long as you dump a couple of volume reducers in the forks to help keen them supple off the top and improve ramp up later in their travel. The supple rear suspension eats up small bumps for breakfast whilst a progressive stroke provides a good supportive ramp up and takes in the bigger hits and hucks with ease, this bike would be a park rat if you want it to be! Componentry, namely the Level brakes and less than tacky tires also make getting fast and loose a little more bum clenching than it otherwise might, the suspension platform of the Altitude makes you want to push hard but the wooden feel of the brakes will soon have you tempering expectations, a 200mm rotor up front to dispel heat might help. 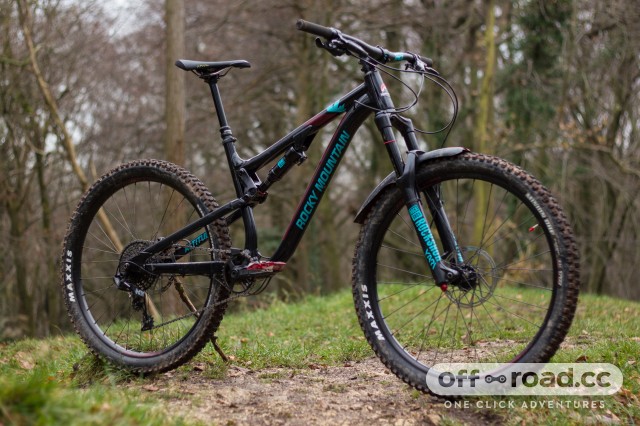 Pushing on down tricky and more technical terrain and the Altitude starts to show why it’s a trail bike and not an enduro bike. The short reach (430mm) on our medium bike in the slack setting leaves you feeling unbalanced and unable to centre yourself on the bike, a slightly longer reach and wheelbase would help matters here, but only if that seat angle was steepened too, otherwise you end up with a bike that’s unbearably long when seated. 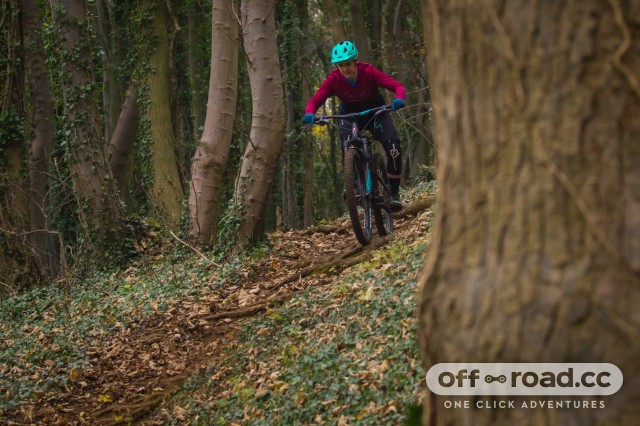 Where the Altitude does excel is on tight n’ twisty tracks, this bike loves a corner, no doubt down to those short chainstays (426mm), a low bottom bracket (drop of -14mm in low position) ensuring it’ll slam into and out of corners with ease. It nips round the tightest of bends with aplomb and you only have to think ‘manual’ and it’ll oblige. Its eager nature will leave you grinning from ear to ear, in travel terms, it’s like the plucky little brother of the Slayer, who’ll do anything to please despite some geometry pitfalls. 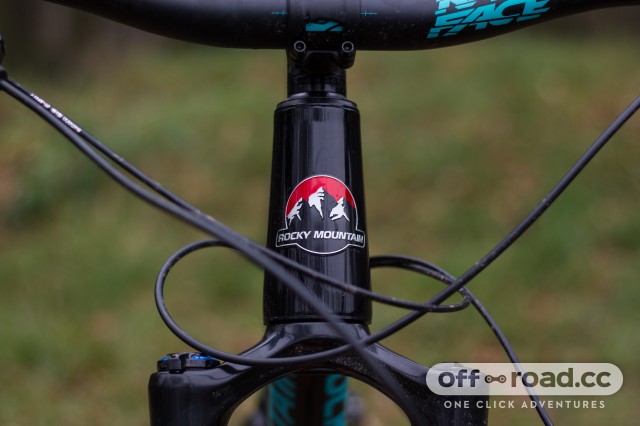 It’s a bike that might be one niche too many, settling between 140mm trail bike and 160mm enduro bike whilst being neither of the above. It’ll certainly attack like an enduro rig (the geometry isn’t all that far removed from the Slayer) and it’ll be an absolute hoot along the way but there are other bikes out there equipped with the geometry to get you more efficiently to the top and then faster back down again too. Maybe that’s the point though, it’s a compromise, if you want a slacker trail bike, that’s slim in the weight department for the price and has a penchant for hops and corners, the Rocky Mountain will leave you smiling on every ride.

Frame appears to contribute to an overall light build

Short chainstays provides a bike that excels in corners

Would recommend a Maxxis DHF WT 3C EXO on the front