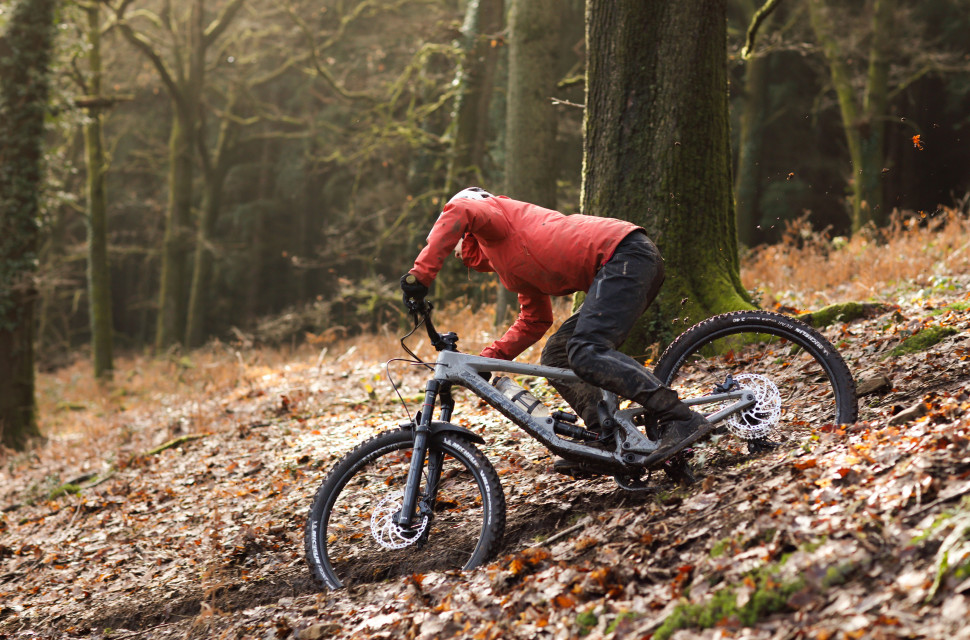 Rachael Wight
|
May 17 2021
|
Overall
Quality
Performance
Value
What's good?
What's not?
Buy if...
You want a big bike for hard riding but don't want to be cosseted

The Nukeproof Giga 275 Carbon Comp is a 'super enduro' bike with 180mm of travel at both ends, and proves a capable and aggressive machine – yet it winches uphill like a trail bike.

Nukeproof calls the Giga a 'super enduro' bike, which should give you some idea of what it's aimed at. Sitting on the fence between enduro and full-on downhill, the Giga gets 180mm of travel front and back in this 27.5" incarnation.

The Giga also comes with 29" wheels, and that version has 170mm rear travel and 180mm at the front. 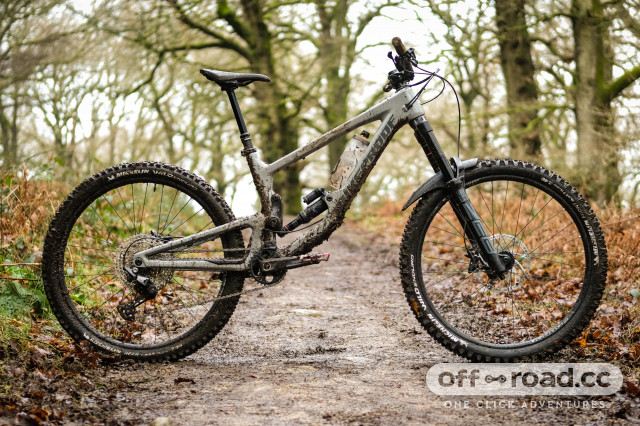 Nukeproof says it started with a very similar platform to its downhill bike, the Dissent. Changes include things like the geometry, such as with the all-important seat tube angle, and various size standards too – the Giga ditches the Super Boost rear end for regular Boost. They also chopped away some weight and, of course, made room for a water bottle.

The Giga gets a 63.5 degree head angle – half a degree slacker than the Mega, which we reviewed here in its Mega Alloy 290 Comp form. The reach is very similar too, and the Giga should fit most riders with frames that range from Small to XXL. 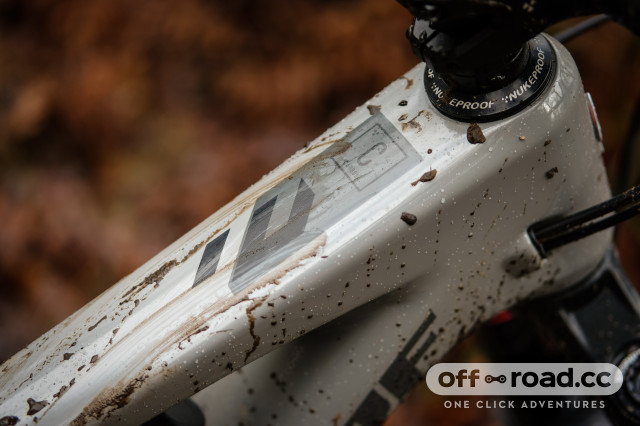 The chainstays are 435mm chainstays regardless of frame size, putting the wheelbase at 1,233mm on this medium. The seat tubes are good and short, to allow for maximum insertion of long dropper posts on all sizes. 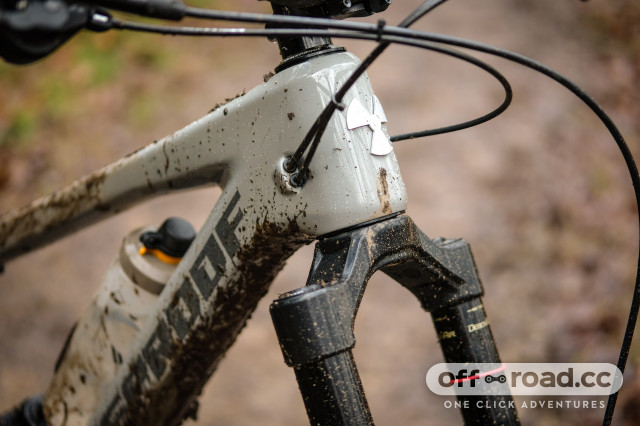 Lastly – and happily, as far as I'm concerned – the seat angle is steep, and gets steeper as you go up in frame size. This helps all riders, however tall, take advantage of the efficient climbing position. 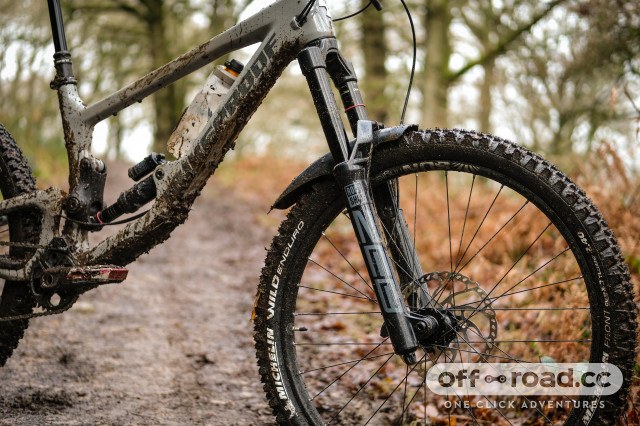 This Comp spec is the base model. For £3,700 you get an also-base-model RockShox Zeb fork with a Charger R damper, and a matching RockShox Deluxe Select R trunnion shock. 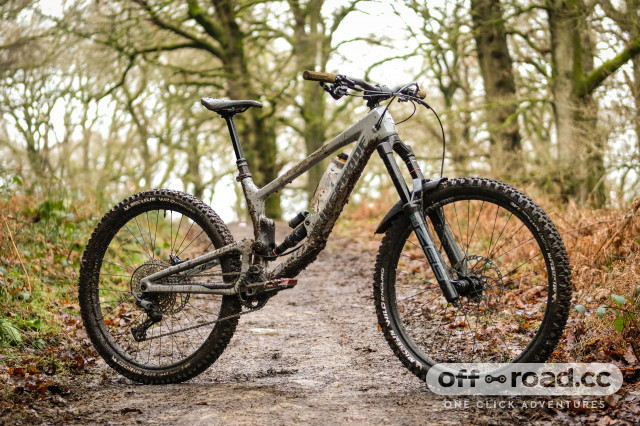 Elsewhere there is a full Shimano Deore 12-speed drivetrain and four-pot Deore brakes. All this kit works well for the price; it's reliable, the drivetrain has a large range, and the brakes are powerful given their spec level. 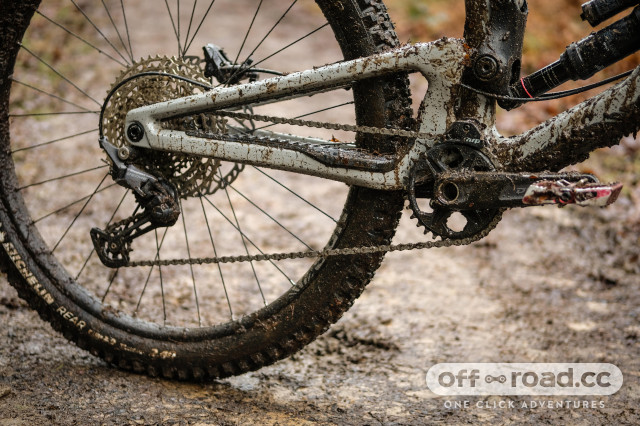 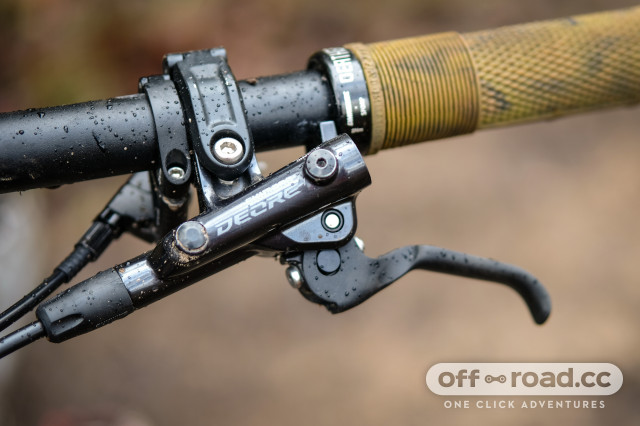 The wheels are a set of Sun-Ringle Duroc SD37s, which are wide enough to fit anything from 2.3 to 2.6" tyres – the stock rubber is a pair of Michelin Wild Enduro 2.4" GUM-X TS TLRs, but these aren't the best in the wet (the tackier MAGI-X compound could have helped on the front), but they are great for moist to dry riding. 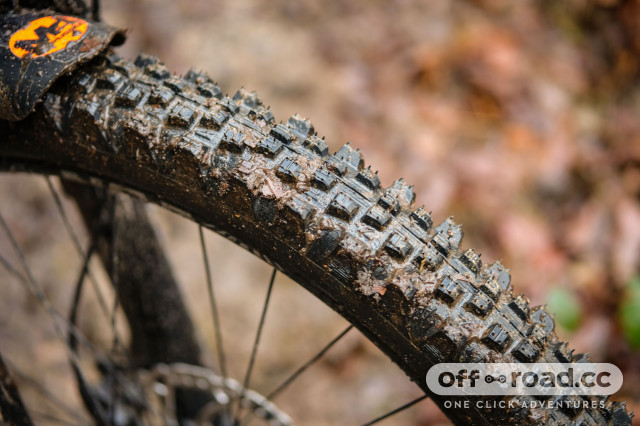 As you might expect, the rest of the kit comes from the Nukeproof stable: a Neutron bar, Sam Hill grips, a well-shaped Horizon saddle – it's good for unrestricted leg movement and comfort when pedalling – and a Brand-X Ascend dropper post. 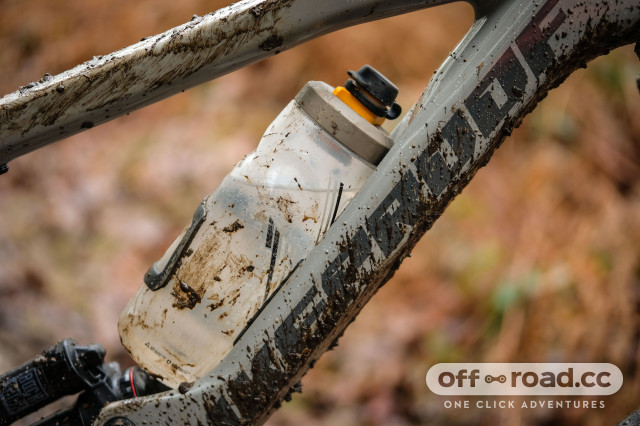 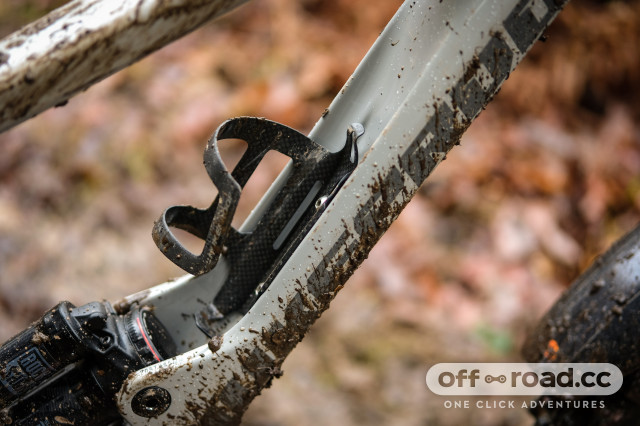 The Giga gets the same linkage-driven single pivot design as the Dissent, with a similar flip chip to alter suspension progressivity (note it doesn't change the geometry). In the more progressive setting it offers a good ramp up and support at the end of the travel.

When spinning up a climb the platform is good, pedalling effortlessly thanks to the steep effective seat angle and lack of bob from the suspension. Pedal hard on a trail, though, and it wallows a little. 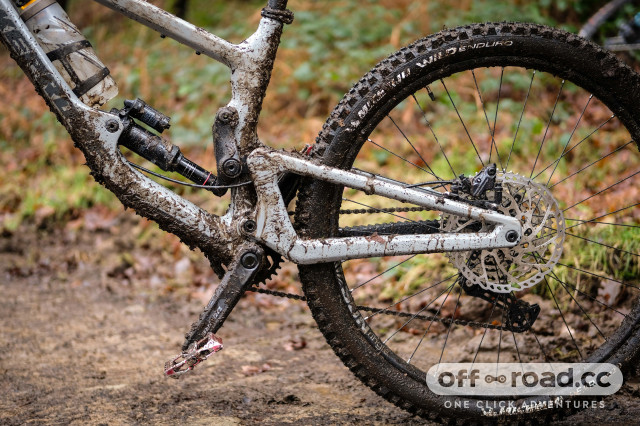 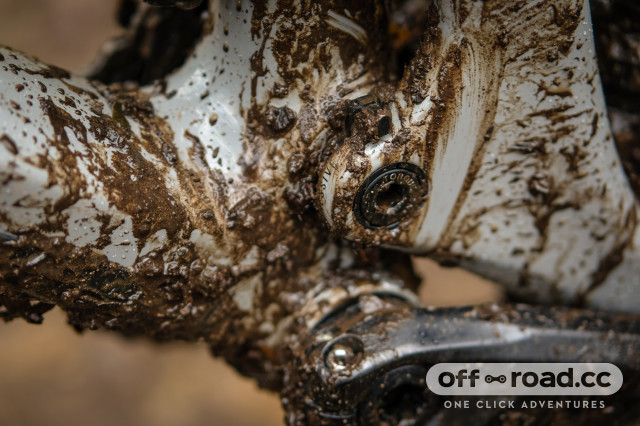 The suspension components are a little underwhelming, but they get the job done. This model of Zeb fork isn't the most sensitive off the top of the stroke over small bumps, but luckily the Zeb chassis is easy to upgrade, with the Charger 2.1 damper costing around £200. 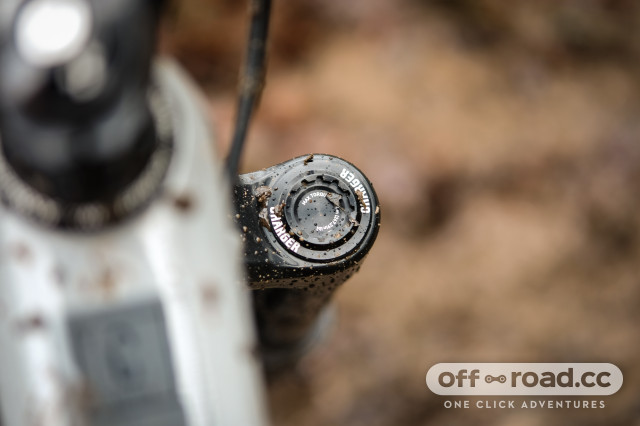 Whereas the smaller Mega feels like a long legged trail bike, the Giga is very much the capable enduro bike. The geometry plays its part well, helping you conserve energy on the uphills ready for the descents. The Giga ploughs its way through the techiest trails you can find. 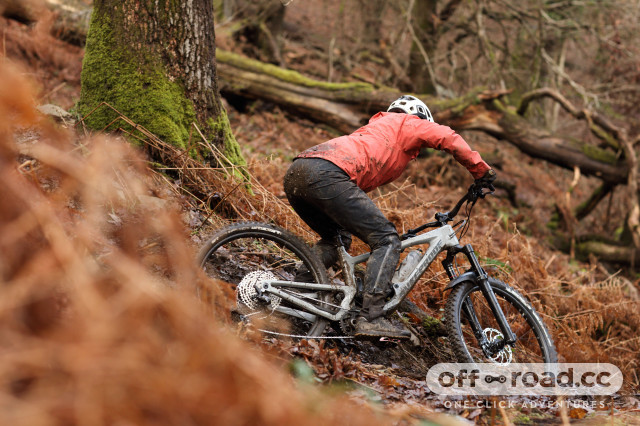 It's the Giga I'd pick up if I wanted to go enduro racing. The central riding position ensures you feel well balanced and perfectly able to weight the front and rear of the bike. It feels stable and capable over rough terrain, and calm across the camber. 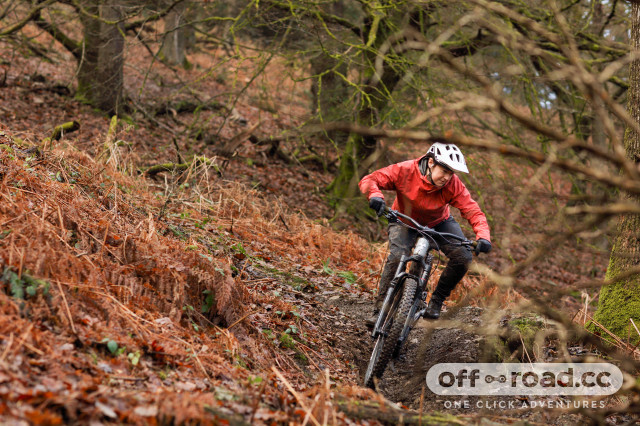 It's easy to sling around corners – its length doesn't hinder it – and there's plenty of support to pump if the going is flat too.

The Giga doesn't smother the trail the way 180mm of travel might; rather it flatters the rider while providing plenty of feedback, a good turn of speed and a fair amount of 'pop' if that's how you like to ride. 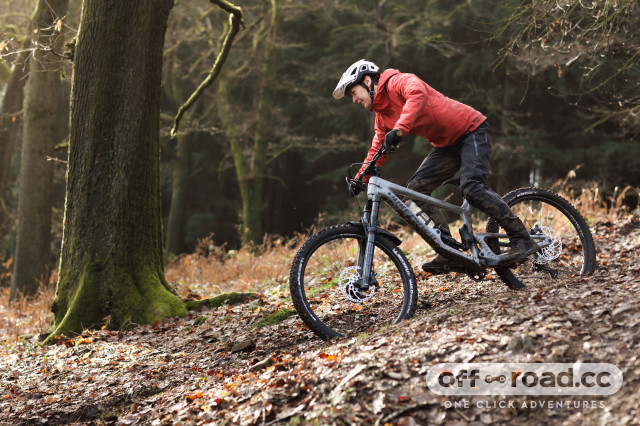 There isn't much to moan about on the Giga. The main pivot bolt comes loose sometimes, the internal routing is a little rattly and, as I found out, if you crash it into rocks the paint doesn't fare too well, but there's nothing you can't live with.

Are there any competitors?

At £3,700 the cheapest Giga still represents a fair chunk of cash to part with, but then it's a serious, carbon-framed bike you could take racing – and not the most expensive option. A Specialized Enduro Comp will set you back £5,000, for instance, while the new Santa Cruz Nomad Carbon CC is £4,499.

The YT Capra and Vitus Sommet are closer matches, coming with carbon frames, similar specs and choice of wheel sizes for similar prices, but neither has quite the slack head angle or the length of the Nukeproof Giga.

If you want a long travel bike at the forefront of the progressive geometry game, the Giga is up for a race and will shred any trail you put in front of it. Built for gravity fans, this long, slack bike with its roomy reach is massively fun and capable, and a great addition to the Nukeproof range.