Skip to main content
Log In Register
Merida Big Trail 800 £1,750.00
A lively handling Plus hardtail that'll put a grin on your face 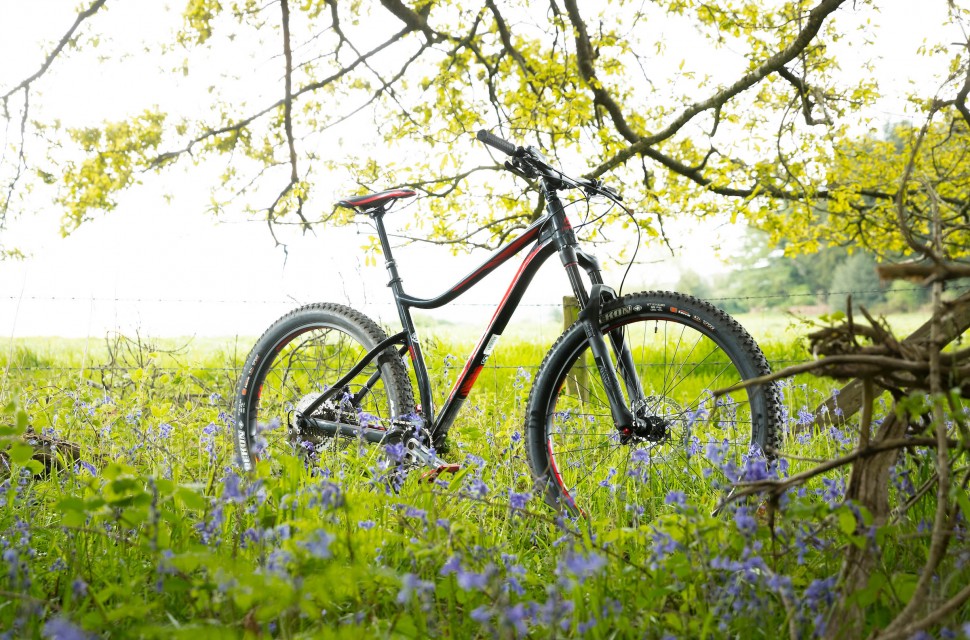 Merida makes frames for some of the biggest names in the business, so it’s no surprise that the heart of the Big Trail is a beautiful bit of fabrication.  It’s made from their top drawer, triple butted aluminium alloy that’s hydroformed into curvaceous shapes that are then smooth welded together, with the neat drive-side chainstay plate being a clever touch that maximises mud clearance. It’s so seamlessly shaped you’ll have to look twice to check it’s not carbon fibre. 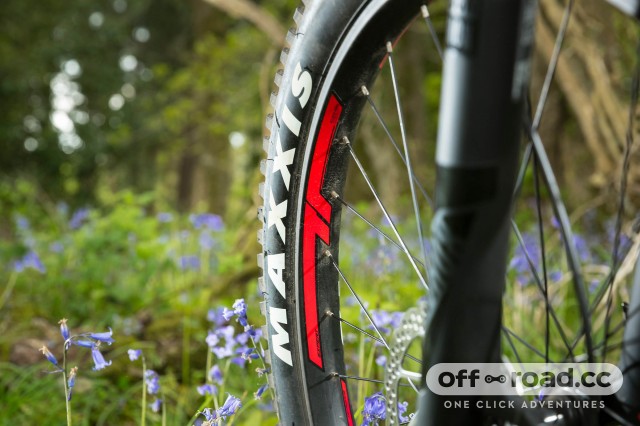 Up front, there’s a RockShox Yari RL fork with 130mm of travel, the open bath Motion Control damper getting adjustable rebound and compression damping. Both fork and frame get wider Boost spacing on the through axle hubs to help improve wheel stiffness. The frame is built around a set of Merida’s own 27.5” wheels with extra wide rims, shod in 2.8” Maxxis Rekon rubber. Happily, no money has been scrimped here and you get the grippy triple-compound 3C Maxx Terra versions with mid weight reinforced EXO sidewalls. That’s just as well because upgrading Plus tyres is an expensive business. The Reckons are mighty impressive in most terrain and conditions, though traditional British slop inevitably defeats the relatively shallow tread, with the fat profile tending to surf about on the top of mud rather than digging in for grip. 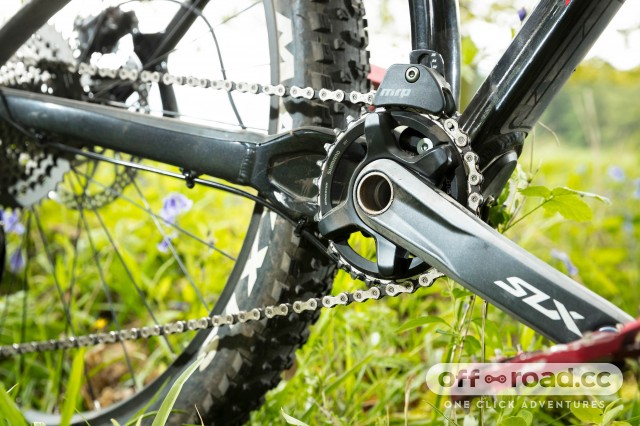 The drivetrain is a no-nonsense mix of Shimano XT and SLX, with 11 smoothly shifting speeds at the rear matched to a SLX crank with a single 30T chainring and MRP top guide for extra security up front. From past experience, it’s all hardwearing stuff, though the 11-46T cassette has a rather large jump between the lowest two ratios that can take a bit of getting used to. When I lent the test bike to a larger, stronger rider, he noticed he could make the Press Fit bottom bracket creak under power, though at around 65kg I didn’t have the same issues. Either way, past experience has shown that the design is much more prone to failure than a threaded unit. Until bike manufacturers stop designing their frames to use them, I’d suggest an upgrade to a more durable Press Fit bracket design that self-aligns from the likes of Hope when the inevitable happens. 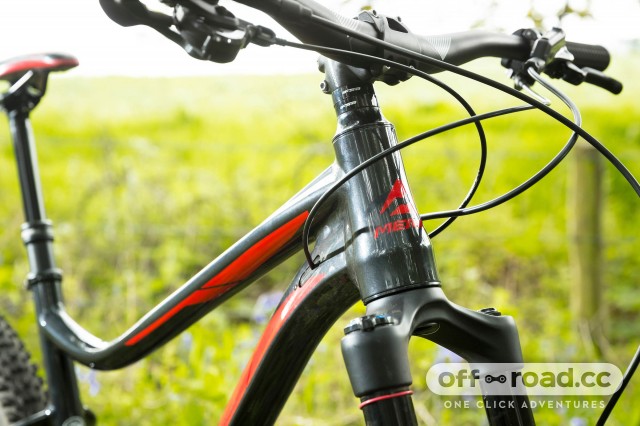 The brakes are from Shimano as well, using non-series M506 levers that ape the shape of the more expensive and powerful Servo Wave levers found further up the range. With 180mm rotors at either end, they’re powerful enough, though you are limited to organic pads rather than harder wearing sintered items. 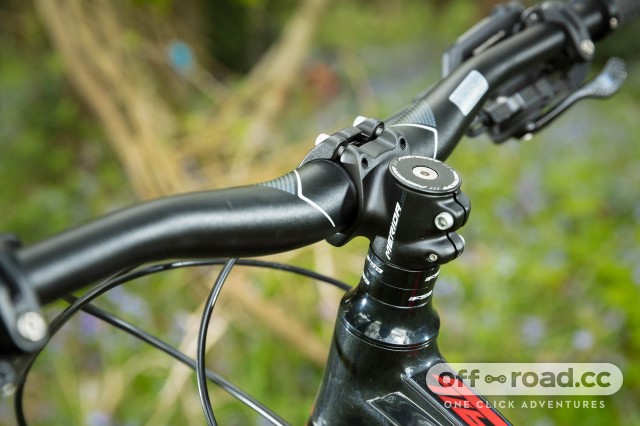 Merida provides the rest of the finishing kit, with decently wide 760mm aluminium bars and a stumpy 40mm stem plus own brand grips. The larger 35mm bar clamp diameter means everything is certainly stiff when you want to haul hard, but I’m personally unconvinced by the standard as the gains in steering precision and lower weight are offset by the harsh, uncompromising feel that helps pass tiring trail chatter straight into your hands. The fat tyres mean this is less noticeable than on normal rubber, but unless you’re big and burly enough to be able to make a standard cockpit feel bendy, it’s of little benefit. 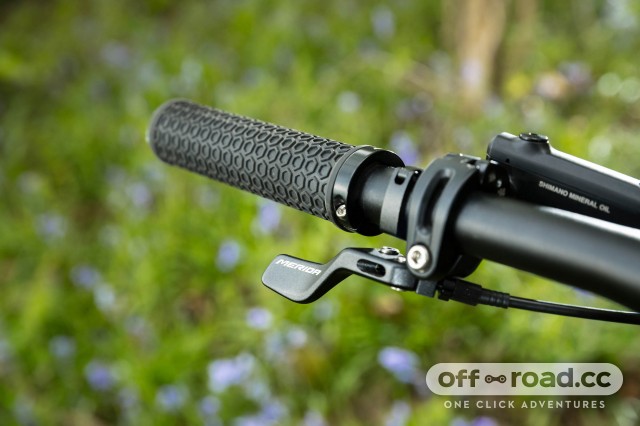 The own brand dropper post has 125mm of travel and works well, with very little play. The shape of the underbar remote is good, though I rapidly found that it hits with the chunky clamps of the Shimano brake when mounted in certain positions, preventing the remote from moving. 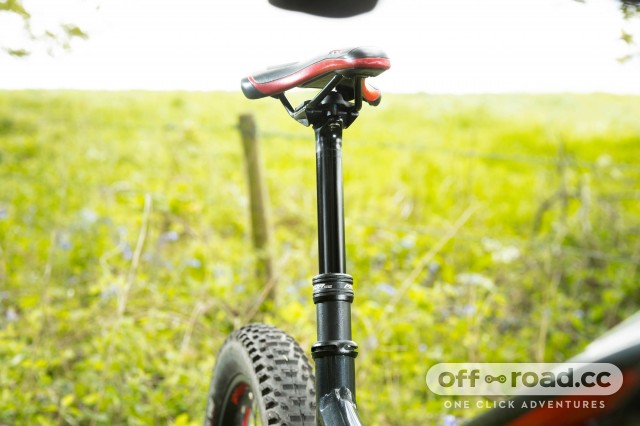 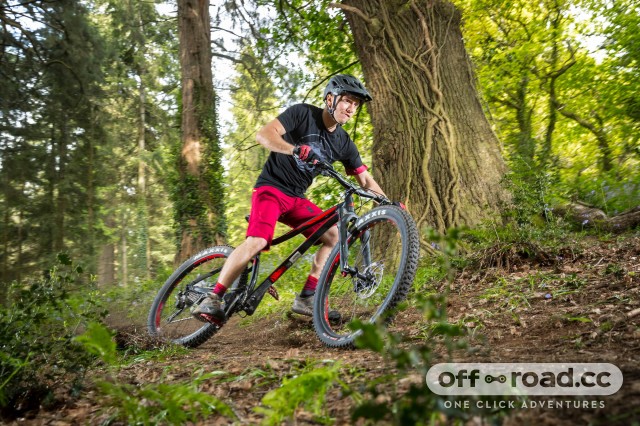 When it comes to geometry, the Big Trail is definitely hedged on the playful, fun and flickable side of things rather than being a long and slack flat out speed machine. A reach of 445mm in a 19” frame gives a fairly decent amount of space to move about, while the 60mm bottom bracket drop and 67.5º head angle keep things planted in the corners. There are definitely more aggressively shaped trail hardtails out there if you mostly ride bonkers steep or high-speed tech. For my admittedly niche preferences, a bit more reach in the bike would have helped regardless, but it’s not unstable and sketchy by any means.

Much more annoying was the domed headset cap/spacer that prevented me getting the bars as low as they could go. As the bike uses a 29” fork, it’s a pretty tall front end anyway, so I found getting them low in order to weight the front end was really crucial to accurate steering. I eventually took it off and replaced it with a lower item, which made a world of difference to turn-in confidence.

Where the Big Trail really comes alive is in tighter and twisty singletrack where the fat tyres mute the effects of rocks and roots. As with all Plus bikes, getting tyre pressure is absolutely critical as too hard means you’ll be pinging off rocks and too soft leads to the tyre slewing about on the rim. Get it right and it’s a quality blend of hardtail accuracy and efficiency with much less of the boot-up-the-arse feeling you get from hitting something unexpected with a normal hardtail. While you might expect the fat tyres to trundle about slowly, they’re remarkably fast rolling and their ability to suck up smaller bumps without slowing down is a big part of that. They work so well that they compensate for the more basic damper of the Yari fork pretty much entirely.

It’s a lazy cliche that bike testers roll out about something feeling like a big wheeled BMX, but in this case, it’s entirely true and the bike had me seeking out lips and kicks on the trail to launch off on every ride. For £1750, it’s more than possible to get a very capable full-suspension bike - even within the Merida range - but the Big Trail is an awful lot of fun if you fancy getting back to basics and battering and bouncing through the trails.

Thanks to the big tyres and quality frame, it's a comfy and smooth ride

It's not short per se, but there are longer and more aggressively angled trail hardtails out there

Any comments on technical climbing?:

Yes, it was a fun little hardtail and all the elements worked well for the most part

It's fun, but probably not for my own use. It'd need to be a bit more aggressive for my tastes - or have suspension at the back for the same money

The Merida dropper posts has a remote that is hard to position by the brake levers. The conical headset cap needs to go as well - a flatter version would allow the bars to be dropped lower.

Yeah, I would if they were dead set on a hardtail and weren't into going mad on steep terrain