Skip to main content
Log In Register
Marin Gestalt 2 £1,000.00
A cracking bike for anyone wanting a versatile machine that'll do everything from commuting to gravel grinding 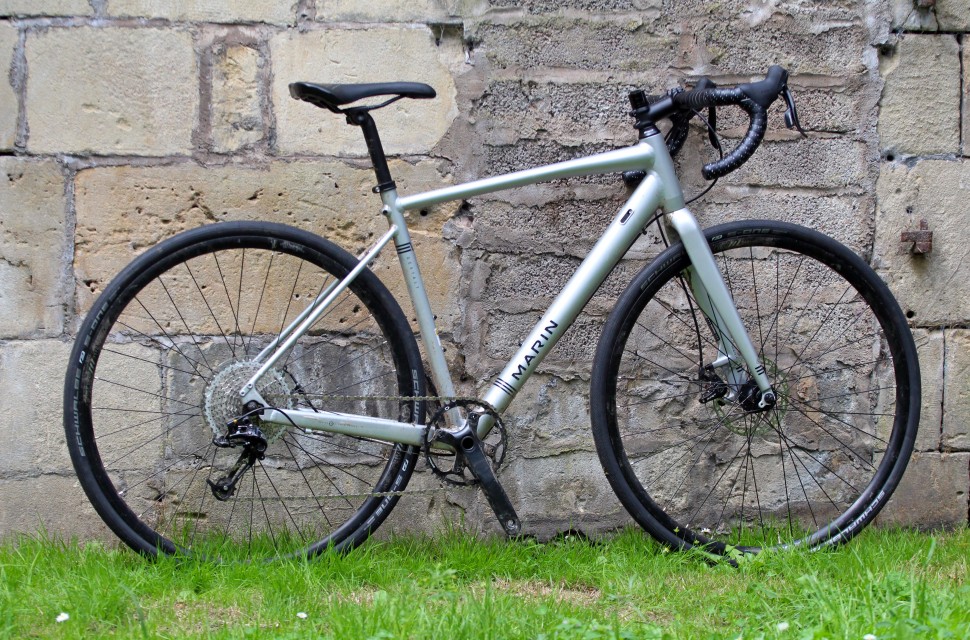 Whether you need something to act as drop bar commuter, gravel adventurer or just a hugely versatile road machine Marin’s Gestalt 2 is likely to win you over with confident handling, even if the frame and fork can be a little unforgiving for pure off-road use.

The Gestalt 2 is the middle bike in Marin’s ‘Beyond Road’ range, hitting that all important £1,000 Cycle To Work scheme price limit on the head, making it an attractive prospect as a standalone do-it-all machine or to supplement a mountain or road bike. 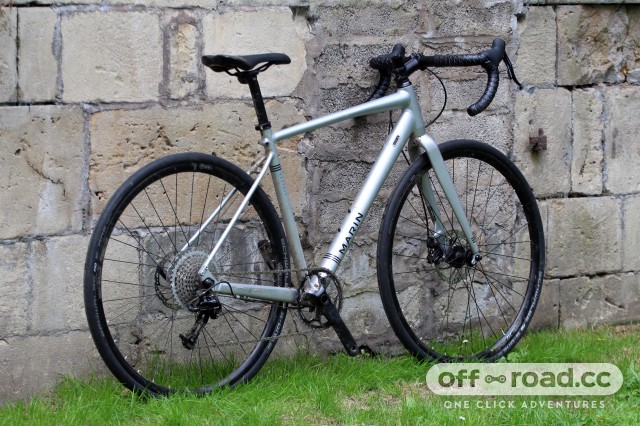 The bike comes with 700c wheels shod in 30c rubber, though there’s decent enough clearance to go a bit fatter if you want. The butted aluminium frame is disc brake only and the fork has carbon legs but a straight 1.125” aluminium steerer. If you want a tapered steerer and through axles, you’ll have to spring for the more expensive Gestalt 3. There are a full compliment of mounts for racks and guards though, while the smooth welds and satin paint finish make the bike look like a higher dollar machine than it really is. 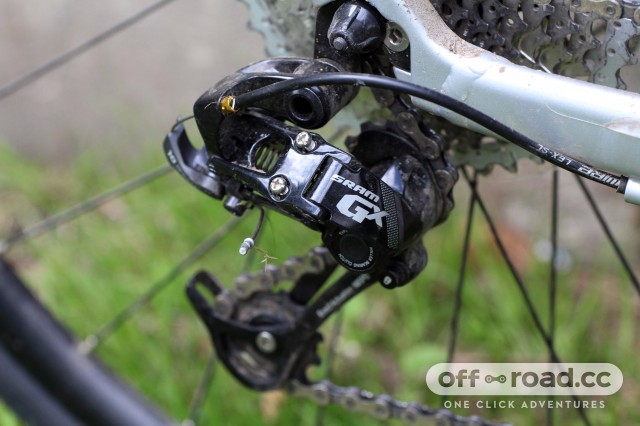 As befits a bike that straddles the divide between road and mountain biking, the kit is a picked from either camp. The drivetrain is a rather clever mix of SRAM’s 10spd X7 mountain bike mech with a clutch to help prevent the chain falling off. That’s paired to a no-name aluminium chainset with an external bottom bracket and single 42T ring with a narrow-wide tooth profile to keep things secure at that end. The cassette is a neat wide range 11-42T item from Sunrace and the shifting is via SRAM’s Apex Double Tap levers. It took a bit of tweaking to get the setup shifting smoothly, with special attention to the B-tension screw on the mech being the secret to smooth gear changes, but once sorted it proved decently smooth and reliable. 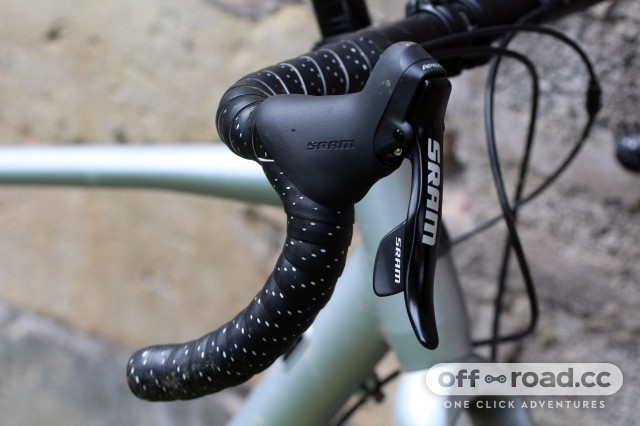 Getting the gearing right for both on and off-road use is always going too be extremely tricky, but the ratios were about as good as you could expect. On road, it felt a touch gappy and I’d sometimes be hunting between ratios to get the right cadence. It’s also fairly easy to spin out the 42T front ring once you start descending. Off-road, that’s all much less of an issue, with the lowest ratio making some really rather steep climbs possible, provided you don’t mind getting out of the saddle and stomping a knee-grinding cadence. 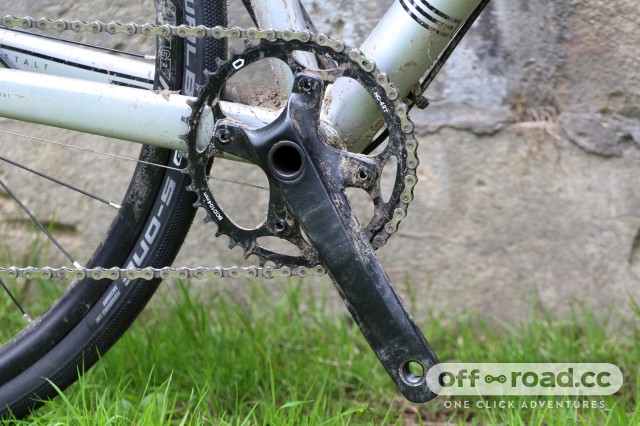 Less impressive are the TRP Spyre-C cable operated disc brakes. Even with 160mm rotors, performance is best described as gutless and the lack of initial bite was rather unnerving at times. With a hefty enough pull, they would haul you up fairly well and while most rim brakes would give a more positive feel, at least the discs were consistently average no matter the conditions. 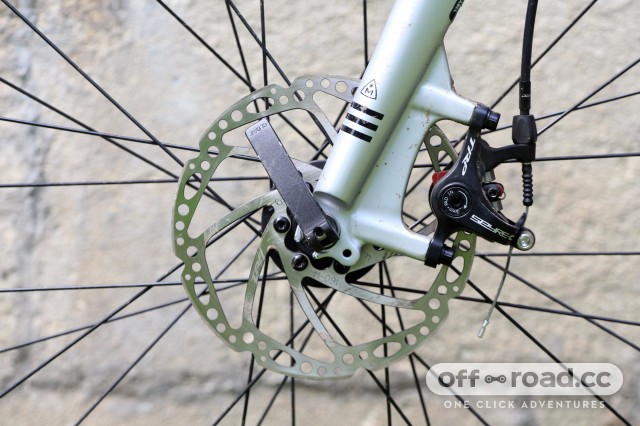 Much more of a highlight was the performance of the lightly dotted tread of the Schwalbe S-One tyres, rolling quickly on hardpack with a decent amount of grip in the dirt. At 30c wide, they offered decent cushioning, though I’d suggest sizing up as much as possible if you intend to do a lot of off-road riding. I reckon you could squeeze a 35c in there without any clearance issues and maybe even bigger. 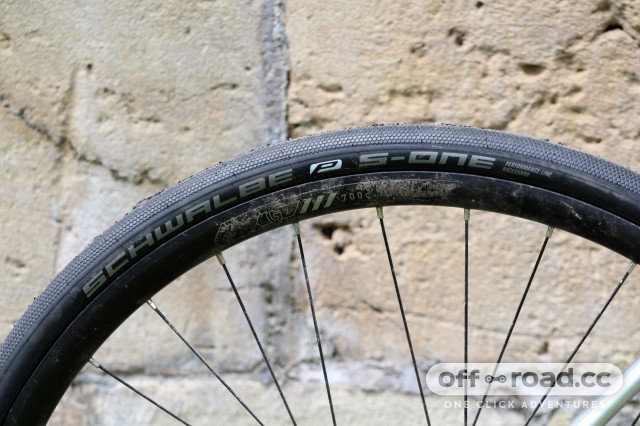 The wheelset is functional and unflashy, with tough double wall rims laced to cup and cone bearing hubs. The rear one needed a bit of adjustment love as it came loose fairly early on in the test, but after getting tightened back up it was fine from them on it. Neither rims nor tyres are tubeless compatible, but it’d be easy enough to replace the rubber and convert the rims with a kit, something that would make a lot of sense to give greater comfort and security off-road.

Marin’s experience in the world of mountain biking comes through in the geometry. At 172cm tall, I rode the 54cm frame and the reach of 373mm was spot on with the fairly small stem and slightly flared 420mm bars. The head angle of 72.25º and seat angle of 73º vary with sizing, but they felt spot on to me, striking a good balance between feeling lively on the road but not too nervous when you take it off the hardback. In fact, I found it pretty impressive how steep and technical the terrain got before the Gestalt felt out of its depth. 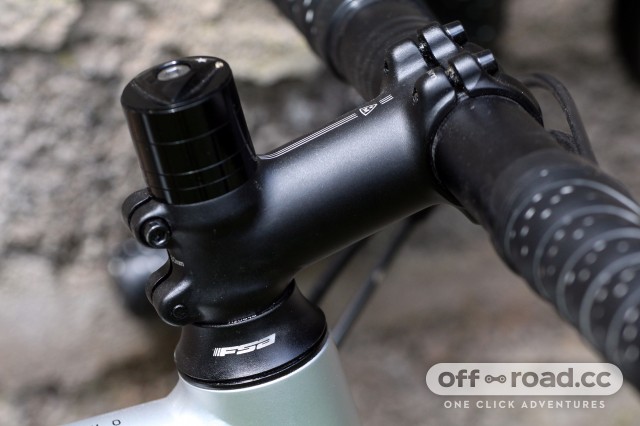 In fact, the main criticism of the Gestalt 2 that I can offer is that it’s a pretty unforgiving ride if you’re in sustained rough and washboard gravel roads. The skinny 27.2mm post and Marin’s own ‘Shock Absorbing Microfibre’ bar tape do their best, but the pretty stiff frame and fork plus fairly narrow rubber still give you a kicking, which makes itself known on a long day out off-road riding, though it’s fine if you stick to road or smoother trails. 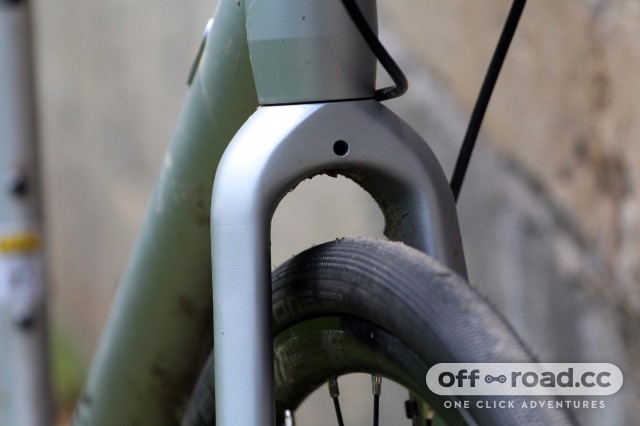 Being realistic, it’s roads and cycle paths that the Gestalt will see the majority of use and it’s a great bike for city centre carving or back road carving, with a little off-road detour thrown in. Viewed through the lens of a versatile do-anything machine rather than a hardcore gravel racer, the Gestalt 2 is a great bike at a good price, with handling that’ll be instantly familiar to mountain bikers and confidence inspiring for road cyclists who want to get off the beaten track once in a while.

Ride beyond road. The Marin Gestalt 2 is a gravel road bike that offers comfortable confident performance on even the roughest roads. The 6061 Series 3 aluminium alloy frame features a compliant rear end that offers a smooth and comfortable ride when cycling on rough roads and tracks. You still get efficient pedalling performance as the frame retains the torsional stiffness you need when putting the power down. The Nalid Navit carbon fork up front offers precise steering control as well smoothing out the ride. The Gestalt can quickly and easily accommodate mudguards and a rear rack for foul weather riding, as well as light touring or commuting. Combining mountain bike reliability with easy road bike shifting the SRAM Apex/GX 1x10 speed drivetrain features a very wide range 11-42t cassette. This gives you a good spread of gears without the worry of your chain slapping about and coming off on rough roads and tracks. The Tektro Spyre road disc brakes offer consistent stopping power in all weather conditions. The 700c road wheels are shod with 30mm wide Schwalbe G-ONE puncture protection tyres that are tough enough for rough tracks without slowing you down on the road. Cycle without limits on the Marin Gestalt 2.

Yes, it was a fun and versatile machine

Yeah, definitely - probably as a drop bar companion to a normal mountain bike

Yeah, without a doubt

There are some better value bikes about, but for a traditional local-bike-shop brake, the Marin offers decent value and really good performance. It's got really pleasant handling that's at home on and off the road, which would make it an ideal commuter that'll also go and play on the weekends.
Bikes