Skip to main content
Log In Register
Marin Four Corners review £850.00
A versatile and comfortable off-road tourer that's a fine ride but a bit on the portly side 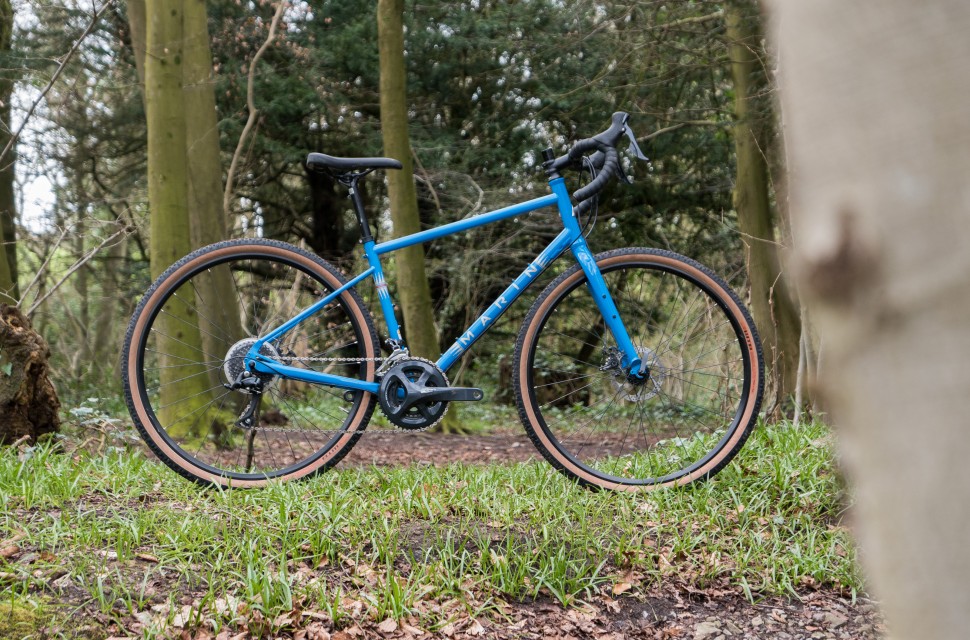 Jon Woodhouse
|
Apr 24 2018
|
Overall
Quality
Performance
Value
What's good?
What's not?
Buy if...
you're after a solid off-road touring machine that wont break the bank - or break, ever.

Marin's Four Corners might make the most of the current bikepacking and adventure trend to sell itself, but at heart, it's an affordable off-road tourer with planted handling and a versatile steel frame. On the downside, it's heavier than similarly priced rivals and that's something that makes itself known on hills.

It's a fair hint at what this bike is made for that the skinny steel tubes of the frame and fork are peppered with mounts for racks, guards and cages, while the super long 198mm (medium frame) headtube gives an upright riding position that's comfy to be in all day, whether on the drops or the tops.

While the extra-small and small bikes get 650b wheels, the largest three frame sizes use 700c wheels but all are shod in 42mm wide WTB Resolute tyres that offer really rather impressive performance in the dirt, with plenty of comfort and grip and a stronger casing to fend off punctures. They're not insufferable on the road either, thanks to a narrowly packed centre tread. 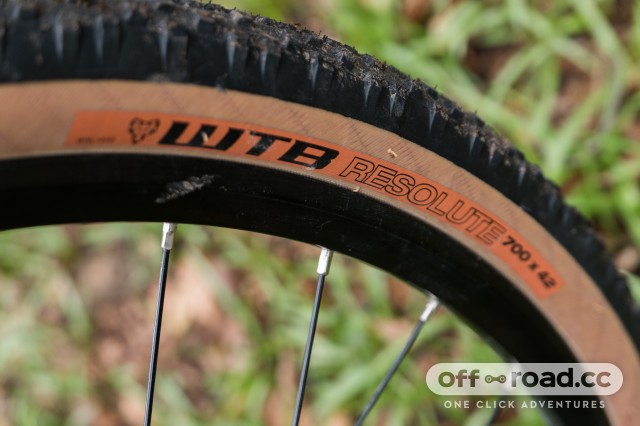 Shimano provides the drivetrain in the form of their Sora road group and it's nice to see a nine-speed block with a respectably wide 11-34T range that's amplified by a Hollowtech axle, triple ring chainset with 50/39/30T ratios that gave plenty of gearing whether hammering on the flat or crawling uphill. 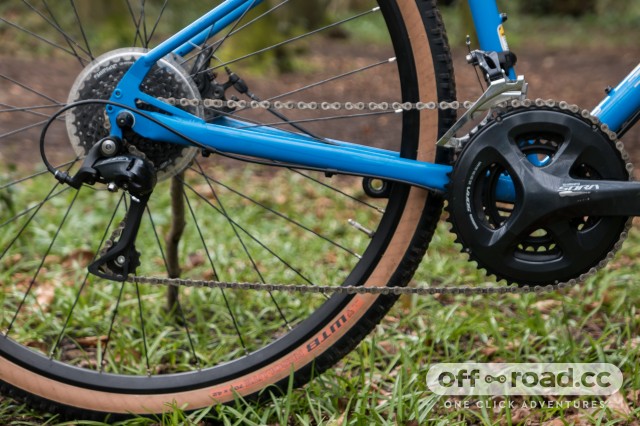 TRP's Spyre-R cable disc brakes are amongst the best of the non-hydraulic bunch, but even so, they lack outright power and require a hefty pull to get them to bite. They're still a million miles better than rim brakes in wet weather or mucky terrain, however, but it's best to stay in the drops for any occasion where you might want to stop in a hurry, something the tall head tube allows. 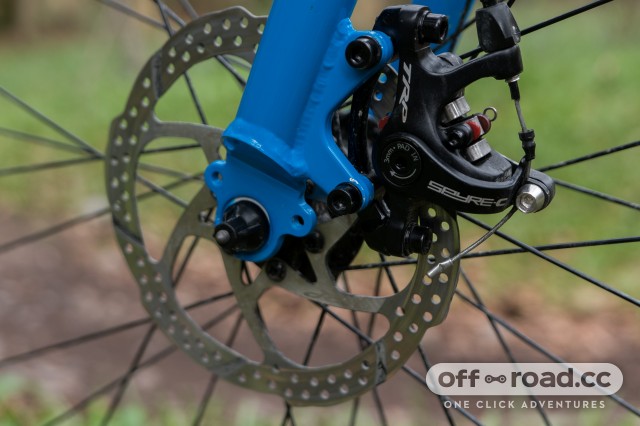 While the frame obviously isn't made out of delicately thin walled tubing, the ride is impressively comfortable, with the combination of material, tyre volume, dropped chainstays and 27.2mm seatpost all doing their bit to stop you buttocks getting battered, while Marin's own 'Comfort' bar tape gets gel pads wrapped underneath it to stop your hands falling to pieces. The WTB Volt Sport 142 saddle looks like a bit of a sofa but it's a comfy place to be even on long rides. 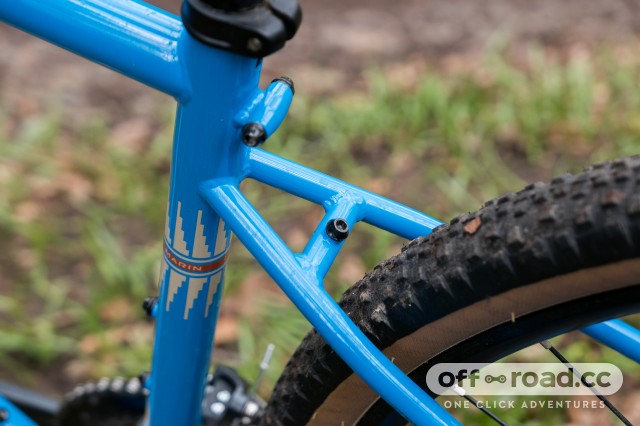 It's a shame that at 13.7kg, the Four Corners is a bit of a porker compared to many rivals at this price point. That's not much of an issue when riding on the flat and having a bit of weight behind it means it's nicely stable when hammering off-road sections, but uphill involves more suffering than most - I had to double check that the cassette really had a 34 tooth sprocket after one extended climb. 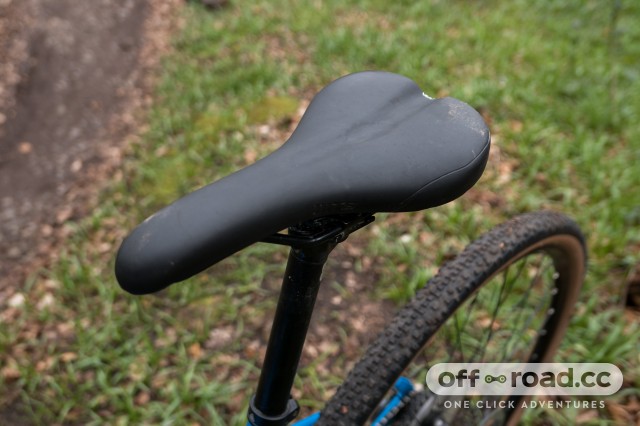 You might welcome the extra material (and presumably, strength) that's gone into the frame and fork if you're planning on riding great distances fully loaded up but if you live somewhere hilly and intend to mostly commute on it then you're going to get strong - or very tired - quickly. Another grumble would be that the wheelset isn't tubeless ready - nor are the tyres - which would help drop weight instantly. I know we all rode mountain bikes using them for years, but quick-release axles on the hubs aren't as secure as more modern through-axle designs either. 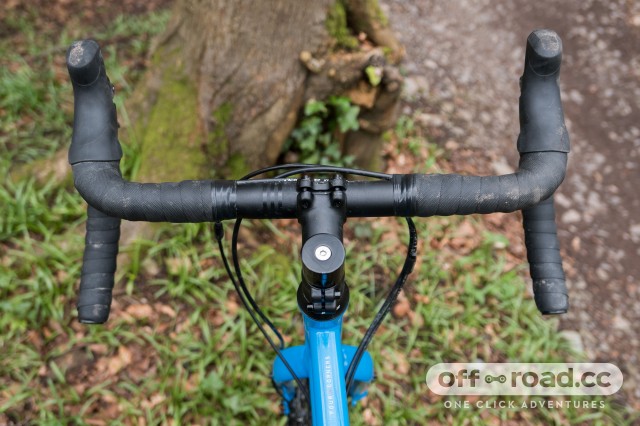 Those minor issues are a shame because when you're not slogging uphill, the bike is great fun. There's a definite mountain bike influence to the handling thanks to the short 70mm stem and reasonably relaxed head angle, while bars get sized up to match frames - the slightly flared 420mm items on this felt a touch narrow for off-road wrestling but fine on tarmac.

It's the former surface where this shines -  it's an absolute hoot to thrash off-road, with the stability to link up fireroad turns like they are giant singletrack berms but also enough pop and play to make you want to bunny hop it over whatever you can. 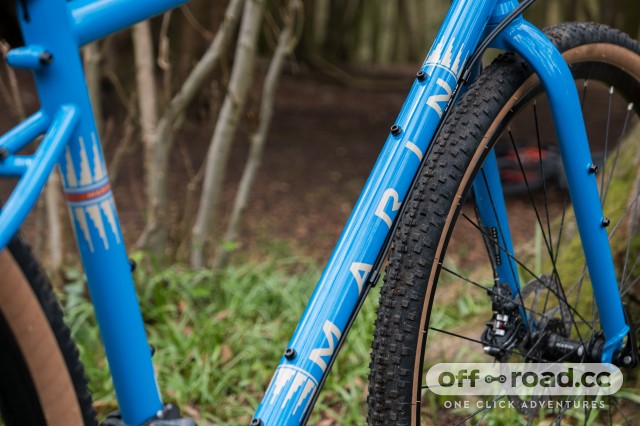 If you're after something super lively feeling that'll spend most of its time on road, you should look elsewhere first. There are also more focused gravel racers and better pure commuting machines but the Four Corners is a mighty fun jack-of-all-trades - which is exactly what a touring machine should be. Now if it could only go on a small diet then it'd be even better...

The Four Corners is built for the adventure rider looking to explore deep off of the beaten path, sleep outdoors, and be ready for whatever pavement, dirt road, or light singletrack is around the next corner. The heads-up bar position and generous braze-ons that make it possible to live on the bike for days at a time are equally at home on the daily commute.

Are you sure the WTB Resolutes are not tubeless compatible? Their website seems to say they are. Are these an older version?

Are you sure the WTB Resolute tyres aren’t tubeless compatible? It seems to say they are on their website.

I've got the previous incarnation of this (2016 model), and agree totally that off road it's amazing, on the road a bit sluggish  especially for urban cut and thrust....also relieved to see the review found the handlbars were narrow: although a shortie, I have quite wide shoulders and my small size bike came with 'bars way too narrow for hauling the thing around on the rough comfortably.