Skip to main content
Log In Register
Hoy Bonaly children's bike review £310.00
Very light and competent, a fun bike for your budding cyclist, but let down by poor shifter choice 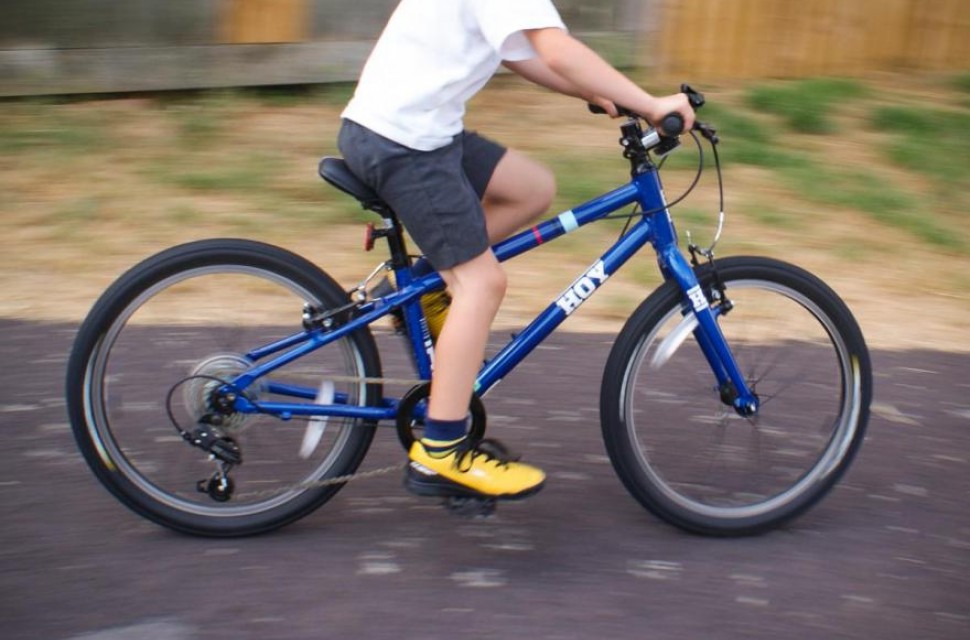 The weight – or lack of it – is the first thing you notice about Hoy's new Bonaly 20 Inch kid's bike as you lift it out of its box. At just 7.8kg it's impressive and a real benchmark against even its more expensive competitors. It's just a shame that its rideability is hampered by what I consider to be a poor choice of gear shifter.

First up, let me give you a bit of background about one of our youngest testers, Charlie. He's just turned six but has been riding a similar 20in wheeled bike since his fifth birthday when he graduated from the Little Big Bike.

He's a confident rider, probably bordering on fearless, and is a bit of a natural in the saddle so he's been able to push the Hoy pretty hard on the various tracks and quiet roads we've used for testing. 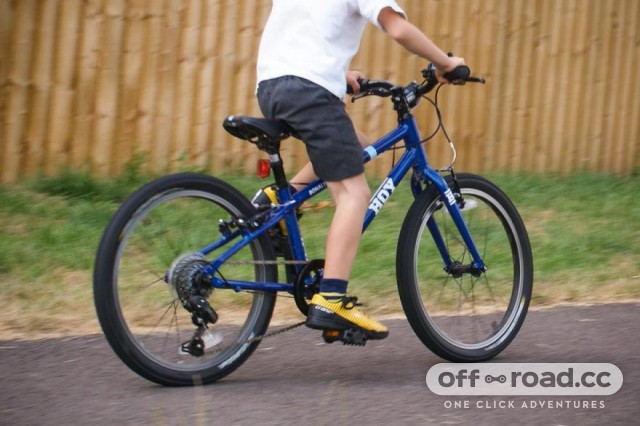 Like a lot of decent bikes for kids these days, the Bonaly has an aluminium alloy frame and it's a rather good one. You get a 1 1/8in headset up front for plenty of stiffness under braking and handling, plus you get internal cable routing for the rear brake and to the rear mech as far as the bottom bracket shell. 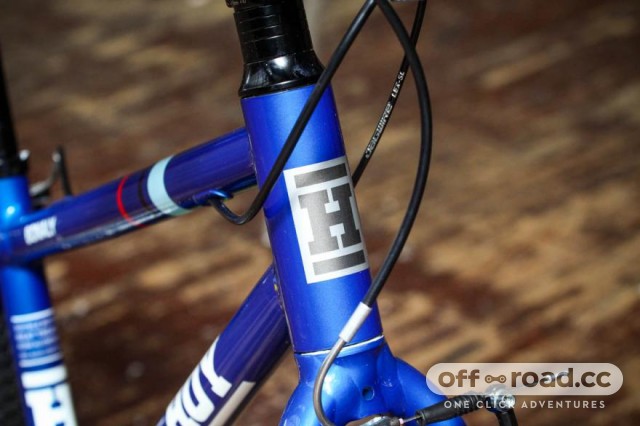 You get bosses, too, for a water bottle cage, mudguards front and rear, plus what even looks like rack mounts on the seatstays. The welding looks to be decent enough, it's not super-smooth but well within tolerance for the price of bike, and then the whole thing is finished off with a thick paint job and lacquered finish. 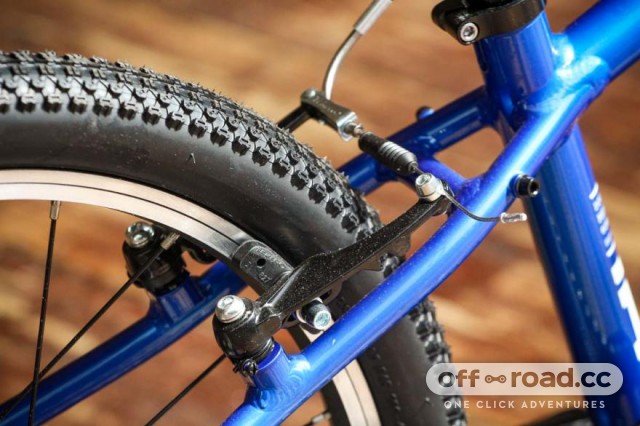 As you can imagine, this thing has been dropped and crashed a few times through the test period and it is pretty much unscathed. The fork is aluminium alloy too, which helps reduce the weight over cheaper alternatives that use a steel offering. This follows the same theme as the fork, being well finished and comes with mudguard mounts too. 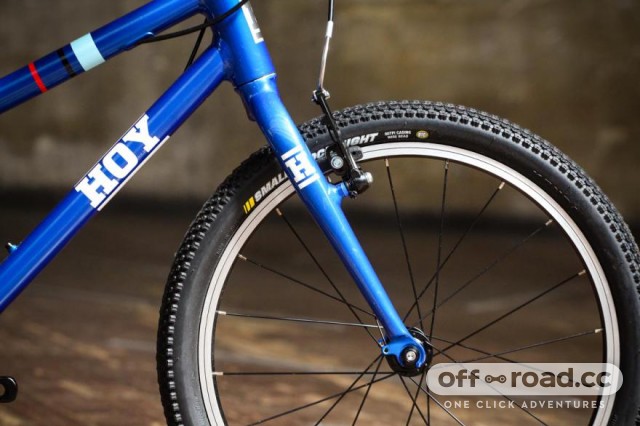 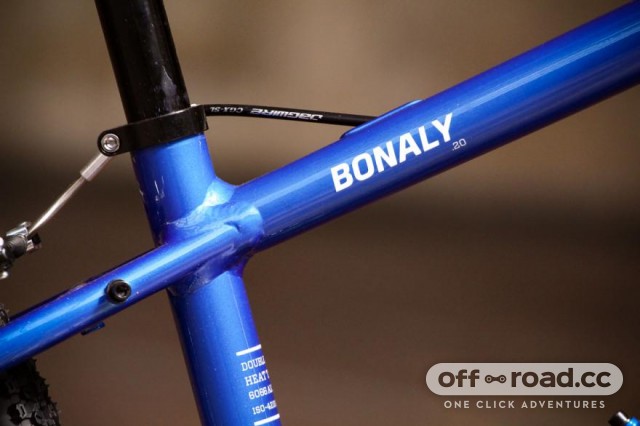 As you'd expect on a bike costing £310, the finishing kit is to quite a high standard. Gear-wise it's based around a Shimano setup with a Tourney rear mech and shifter and offers six gears with a range of 14-28t over the cassette, paired to a 32-tooth chainring. 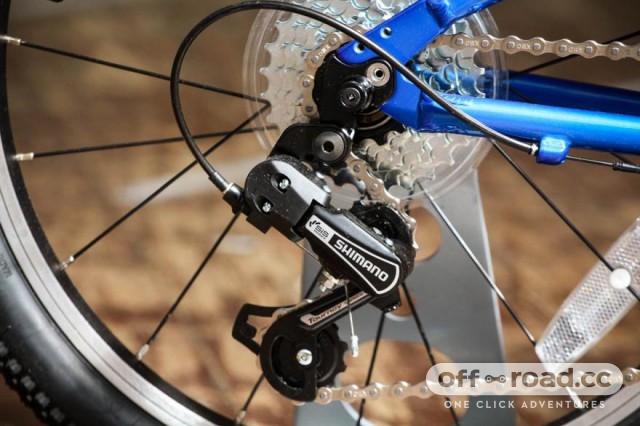 The likes of Frog, Islabike and Vitus offer 7 or 8-speed gearing, with the last two offering higher and lower gears with a 12-32t cassette. It's not a deal breaker but the lower 32t sprocket can make a big difference to little legs making it up that hill. 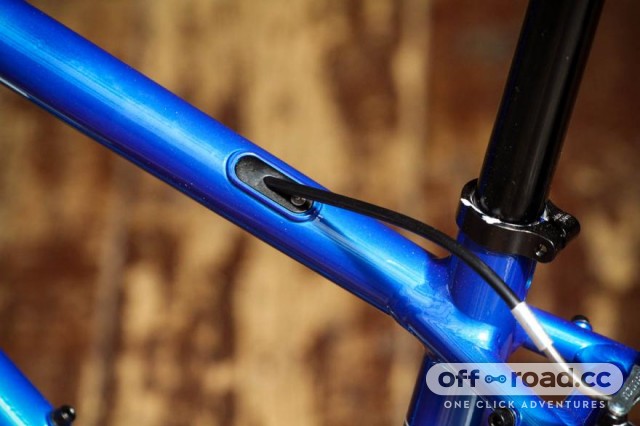 Pretty much the only real issue I have with the Bonaly is that choice of Tourney shifter. On his Vitus Twenty, Charlie has an Altus setup which uses two Rapidfire thumb shifters which are really easy to use while keeping both hands on the bar. With the Tourney, the thumb button to change into a bigger gear is just as easy but the lever used to go back up the cassette is hard to push. 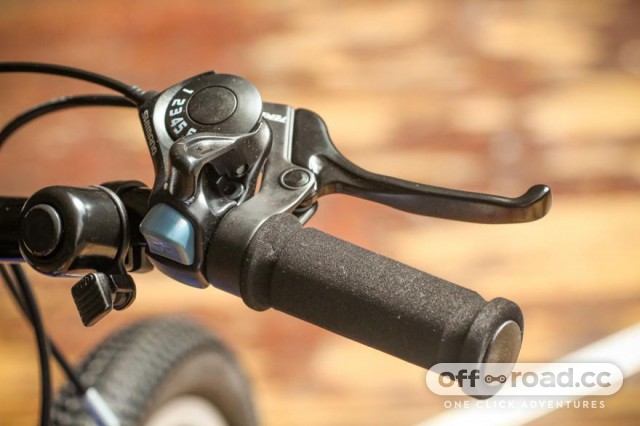 Things get even worse when the third gear is reached as it moves the lever well out of the reach of a child's thumb. To move into second or first gear, Charlie would have to remove his hand from the bar to try to change gear which caused all sorts of handling issues considering the amount of pressure needed to move the lever. It's a shame, as he soon didn't bother using the gears at all and tried to smash every hill out of the saddle. 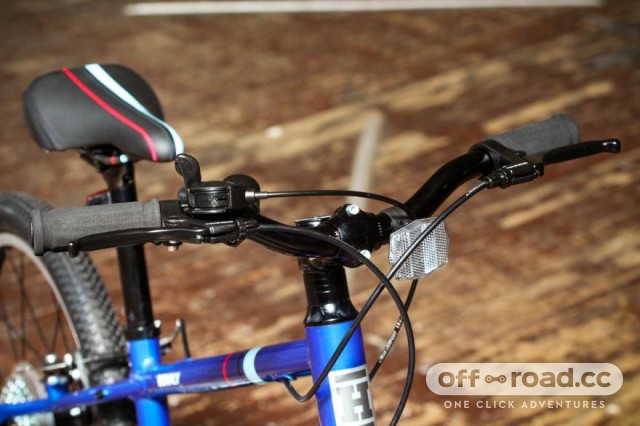 Back to the positives though, the Tektro V-brakes offer plenty of power for such a small bike and you know full well that your child is going to stop quickly if the need arises; you should also save a few quid on replacing shoes as well! The levers are easy to use and they are reach-adjustable too. The riser bar is 49cm across and paired with a 55mm stem seemed to offer a comfortable position without making the handling overly twitchy. Even the foam grips are grippy but squidgy enough to give a comfortable ride. 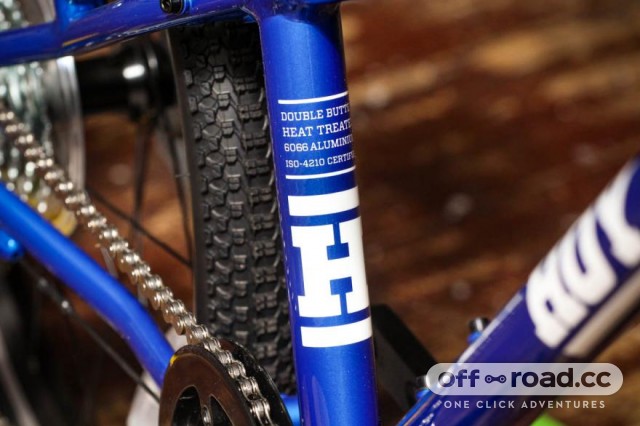 The Hoy branding on the stem and saddle is a nice touch as it gives a complete finished look throughout the bike. The saddle itself is very comfortable according to Charlie and it feels firm to the touch with just enough give to take the sting out. 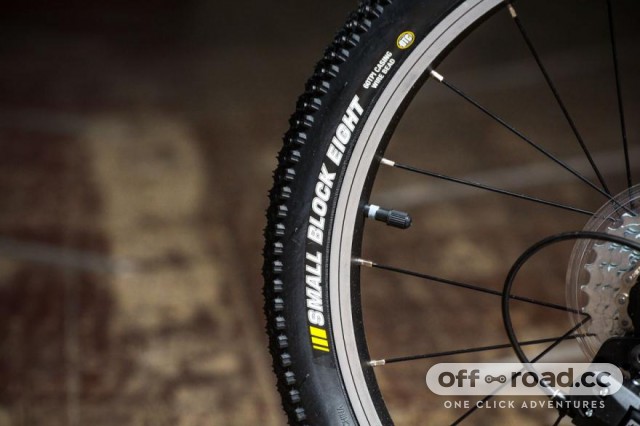 The Hoy uses Alex rims paired with Joy Tech hubs. It's a tough little wheelset with 32 spokes in a one-cross pattern throughout. The front wheel went a nudge out of true after a crash but it was easily rectified. A neat touch is the wear line on the braking surface, so you can keep an eye on how the rims are doing and when they need replacing.

Kenda makes some decent tyres for small wheels and these K1047 20x1.75 inch versions are a good example. The small knobbly tread works on gravel, grass and hard packed mud, plus they still roll pretty well on the tarmac. Puncture proofing looks to be good too, as they are completely unblemished after plenty of off-road shenanigans.

The weight of the Hoy is its main plus point. Give a child a bike that they can lift off the ground and they are going to be able to fling it around when they're in the saddle. The local park has a sweeping gravel path running around its perimeter with some descending, climbing and flowing bends, and it was here that I watched Charlie really get to grips with the Bonaly. 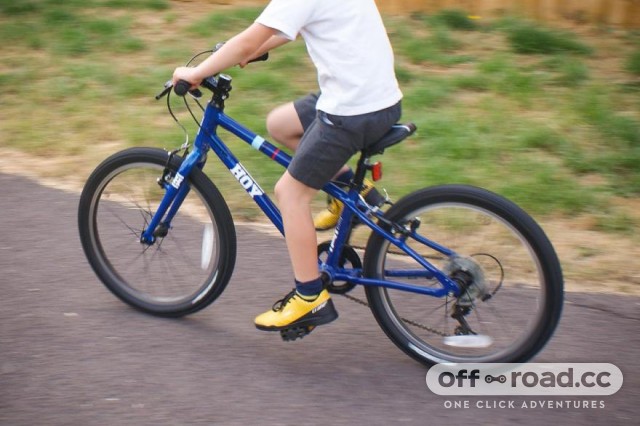 The steering looked to be slightly quicker than his Vitus Twenty and the Hoy's 1.5kg weight loss made it even more responsive. Once he'd settled down he was taking the bends faster and much smoother as the lower weight allowed him to use his own bodyweight to correct the bike's line and direct it exactly where he wanted to go.

Descending was fun and, buoyed up by the confidence of the power on offer from the Tektro V-brakes, risks were soon being taken. Hitting the climbs, he was quickly out of the saddle, and even with a change of centre of gravity the Bonaly never became twitchy. We did a few hour-long rides too and thanks to the position on the bike he was perfectly comfortably just tapping out the rhythm. The Bonaly is a good all-rounder. It's easy to ride at steadier paces if your child isn't the most confident on two wheels, but once they start to blossom and grow in confidence the Hoy will continue to appeal.

I've been down the cheap heavy clunker route with my eldest and it did nothing to enamour her towards cycling. With the arrival of her secondhand Islabike turning up, things completely changed. If your child is interested in cycling then it's worth the investment in a bike they can get the most out of.

Islabikes are often touted as one of the best for children purely thanks to some well-thought-out geometry and kit. Others have started to follow, though, and this Bonaly is near-identical. The Hoy costs £310, which could be considered a bargain against the Beinn 20 at £389.99. We tested the 26in version here. The Hoy is slightly lighter by a few hundred grams and while the Islabike has a better gear shifter setup, the Gripshift isn't the best either for smaller hands.

Frog comes in with its 55 20in alternative at £310, the same as the Hoy, but you do get two sets of tyres chucked in and a five-year frame and fork warranty. You also get an 8-speed thumb shift setup, though the whole bike weighs an extra kilo over the Hoy.

Vitus's Twenty deserves a mention, too, and not just because I bought one for Charlie. Yes, it weighs 9.4kg but it's still light enough to be enjoyed and for Charlie to pop the front wheel up over a bump in the trail. You get those thumb shifters for the 7-speed system plus quality wheels and finishing kit. And it costs just £219.99, which makes it a real contender.

The Hoy Bonaly is a really good bike, one of the best in this category with great kit, a lovely frame and a really impressive weight. It's just a shame that the gear shifter choice takes the shine off.